Jetpacks are probably second only to flying cars on the list of peoples’ sci-fi desires that have yet to really happen. Just like automobiles that zip around the stratosphere, the promise of a compact flying machine that can be carried around by anyone on their back has yet to be realized in a user-friendly way. Sure, there are systems like ones from the company Gravity that get most of the way there, but they require serious training, a lot of jet fuel, and are cumbersome for the average person to say the least. The inventor of SkyPak, Daniel Gant, thinks he has the solution.

SkyPak, under development by Gant’s company Ascend Dynamics, is a compact, 80-pound electric “jetpack.” It’s a ground-up design; however, it works in the same basic way a drone does. It can produce enough thrust to lift a person off the ground and thanks to its unique design, it can stabilize itself like a drone as well. Computerized control in every flight axis is achieved, meaning that in theory, the special training needed to operate it is limited.

Now, if this is all starting to sound too good to be true… it is. For now. The SkyPak is entirely electric, and because its total system output is a whopping 112 horsepower, it burns through its 1.82-kilowatt-hour battery in just two minutes. In short, the pack’s energy supply must improve for the system to be usable in the real world. There’s much more to this machine than just its short battery life, though.

Gant began developing the SkyPak a few years ago, and he’s not just some backyard tinkerer. He’s worked for a leading aircraft manufacturer and has a degree in mechanical engineering. He also has his pilot’s license, although since the SkyPak is technically an ultralight, it requires no license to fly. He sees legitimate uses for his creation, and it’s not something he rushed into.

It started in 2020 with a small-scale prototype that looked much more like a hobbyist drone. It proved the layout, which uses six groups of rotors, was feasible as a means to enable controlled flight. By angling the top and bottom motors, Gant’s system can provide stability in pitch, roll, and yaw. Despite everything being so close together, he indicates that turbulence between the fast-spinning blades is not a problem, either—even on the full-scale test rig. “There is turbulent flow that decreases efficiency; however, there are also gains in efficiency with a counter-rotating system like this that tend to balance each other out,” Gant told me. “This has not been an issue in our testing so far.”

Yes, Gant has indeed been testing the full-scale prototype of the machine to its full potential, lifting a 100-pound test frame which is often fitted with a human analog. If this doesn’t seem like enough lifting power, well, version two is on its way with the same 84kW total system output, but larger ducted rotors to take full advantage of the available power. Each brushless DC motor, of which there are 12, produces about 9.4 horsepower apiece. Once “36- to 40-inch” props are installed, the second version of the SpyPak will, according to Gant, be able to lift 200 pounds. 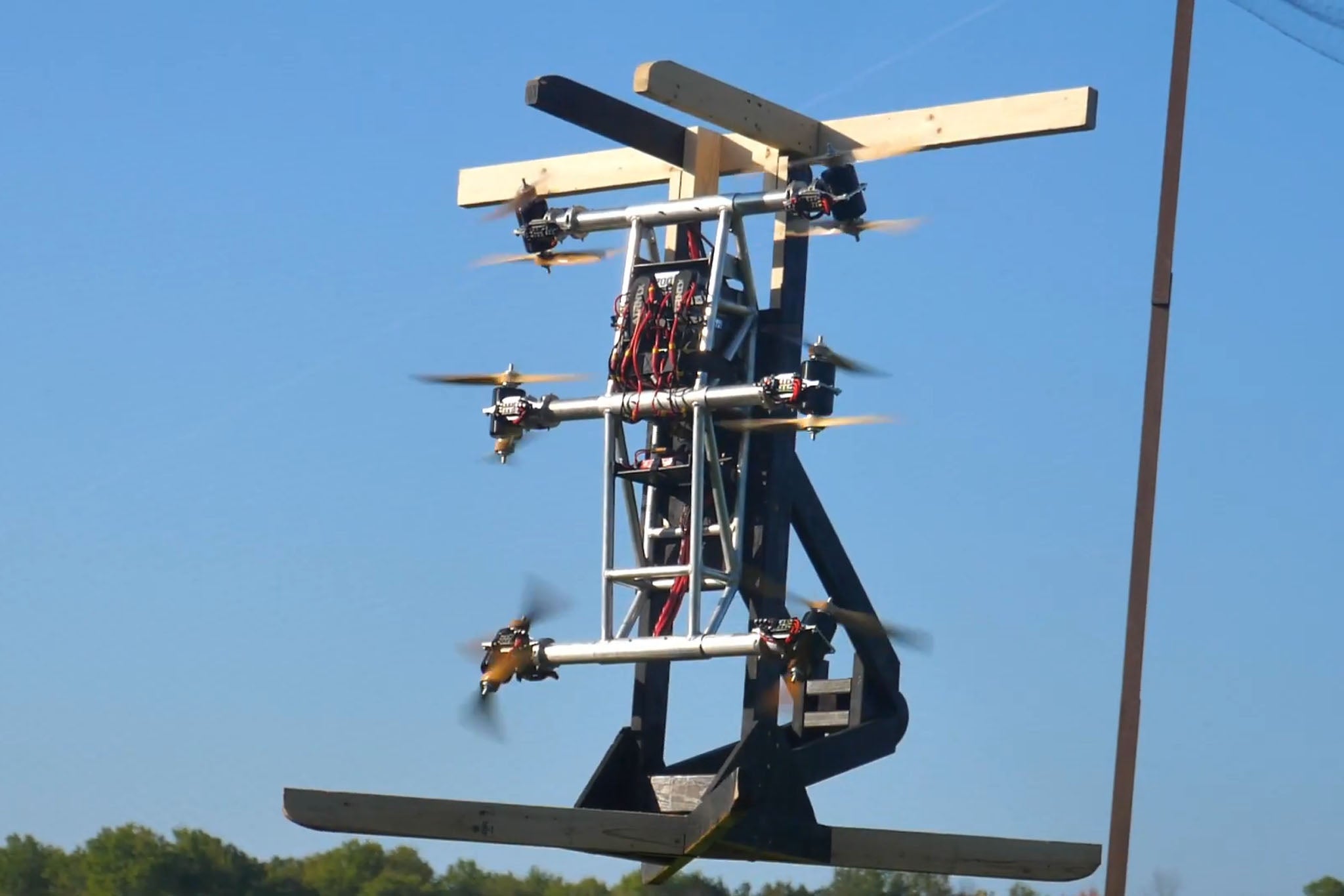 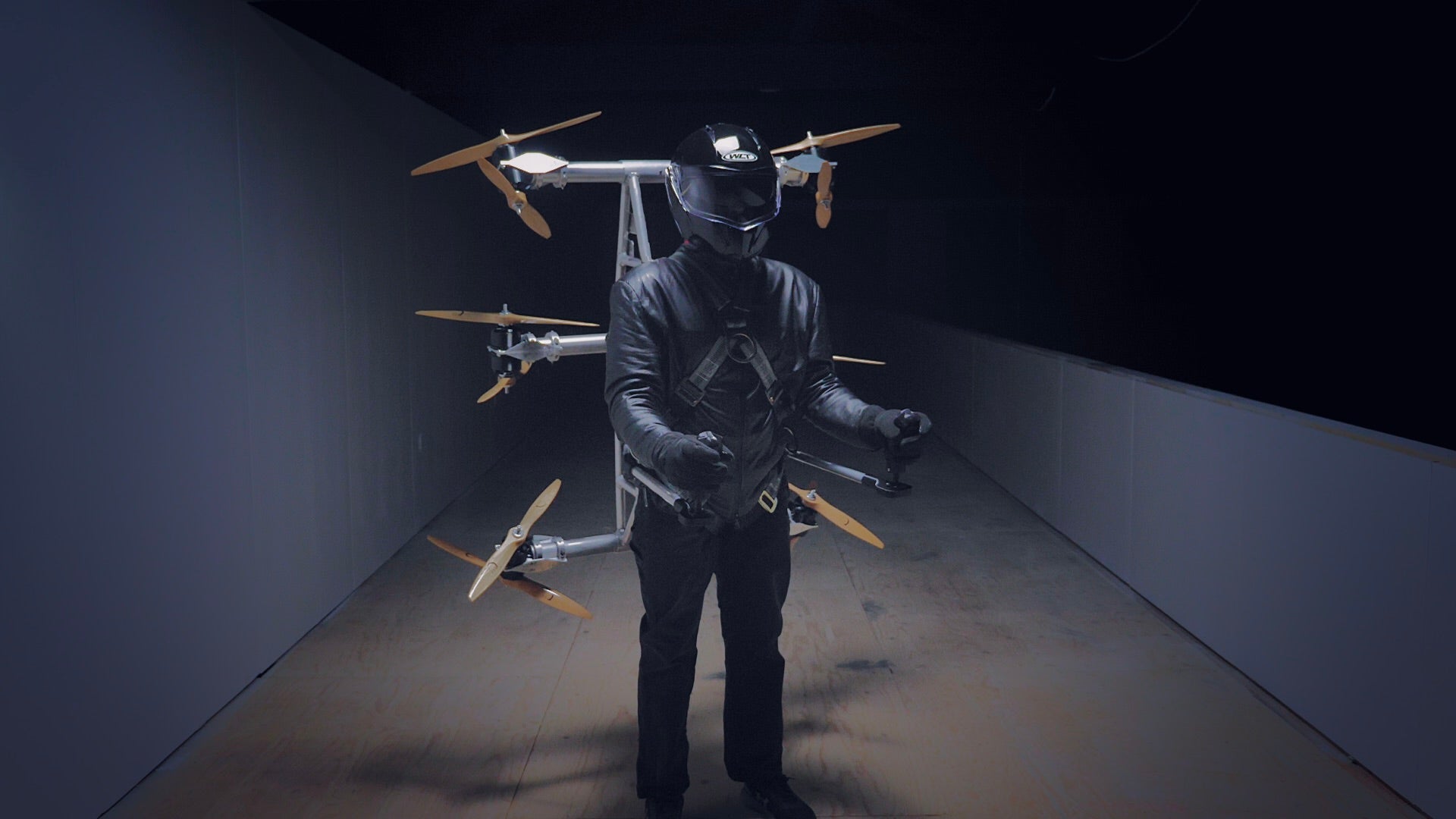 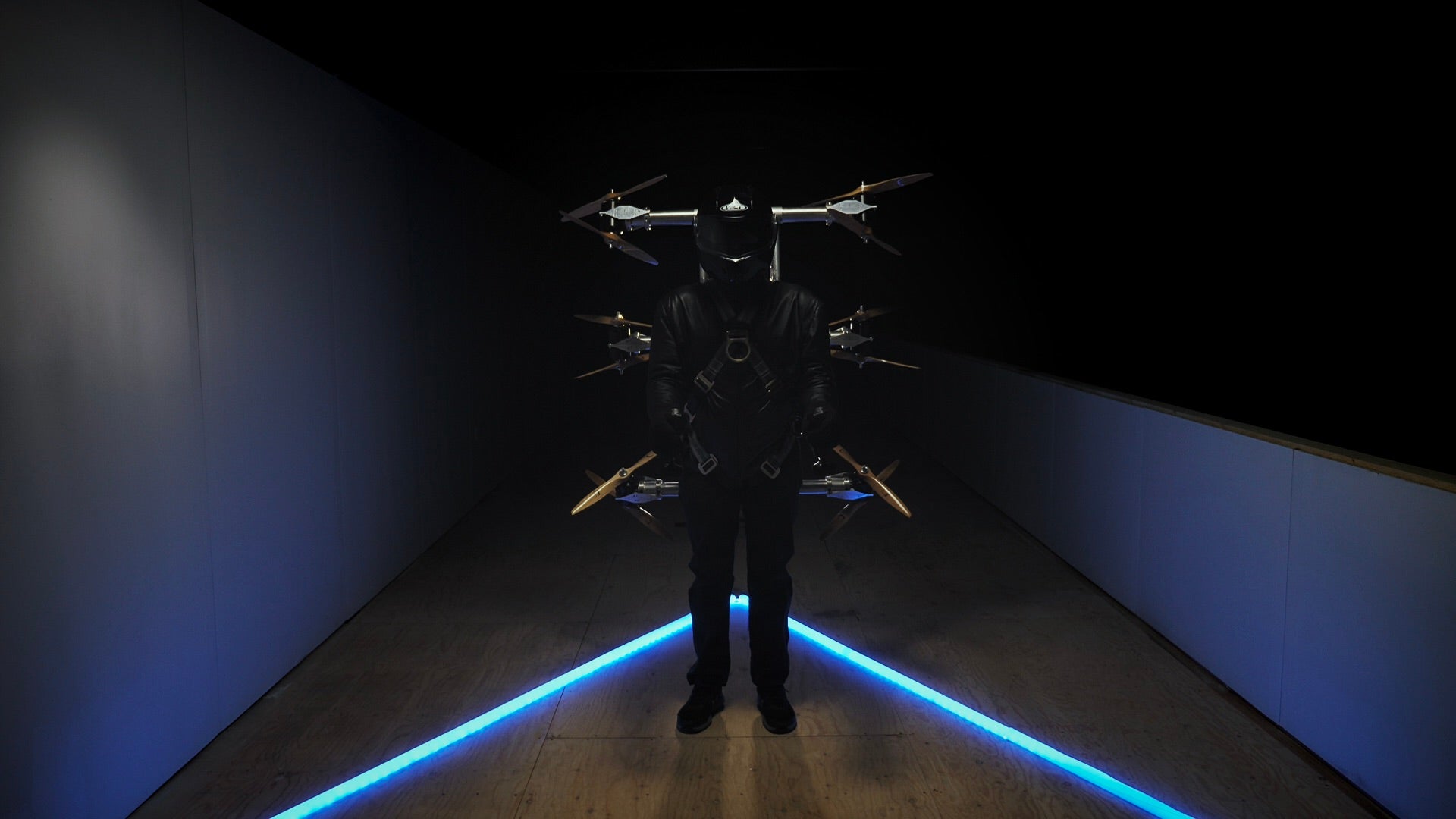 Once version two comes around—which is dependent on more funding—ducts will also be added to boost performance, cut down the turbulence, and increase the machine’s safety. Needless to say, you wouldn’t want someone to walk up behind you wearing this thing, and Gant says once there’s an actual human testing the machine, “a tether and support structure will suspend the SkyPak and pilot above the ground.” Later, overwater testing with proper safety measures might also happen.

But what about the version regular people will be able to buy? Well, the arrival date for a consumer version is dependent on the second prototype getting built, which hasn’t happened yet. That also implies the problems with energy density aren’t unsolvable. Barring battery tech breakthroughs, Gant believes a combustion engine powering a generator is the most realistic option to extend the flight time. How much usable range such a setup would eventually enable is unclear, but since it’s said the production SkyPak will hopefully be used for tasks like inspections of tall infrastructure—it’s claimed it will have features like GPS-enabled “hold mode” to keep an operator stationary mid-air—loiter times will likely have to be increased considerably.

If that machine does arrive, which seems not completely improbable in my opinion albeit with a limited flight time, Gant estimates costs at between $120,000 to $180,000. “The release version of SkyPak will be designed to the highest levels of safety and will follow all industry standards to create the safest possible aircraft that is also easy to fly,” a company document says. If that’s true, it could be the world’s first usable jetpack-like device that doesn’t require a degree in rocket science to operate. If it’s not, though, it’s just another attempt at a human dream that may never quite be realized.