There’s a simple truth about life. You can split all of its variation and complexities into two categories: Things you can control and things you can’t. You can’t control a world pandemic, for example, or how it might spread around you. But you can control your own behavior, as well as how you spend your time during one.

I have a toddler son. His name is Harrison and he turned four in August. As original plans for a summer vacation eroded—out of my control—an opportunity came to give Harrison his first chance to try camping—in my control. After all, this year he reached an age that I felt he could start to appreciate camping. Get away from the house, experience different scenery, a different pace of life, enjoy something not requiring a screen.

Growing up in a camping family, I remember the campfires, marshmallows, and sleeping bags. But cannot forget the hassle of the tent and my brothers and my own lack of patience for setting it up. That’s why trying the Roofnest Falcon hard shell, rooftop tent, attached to a 2020 Kia Telluride proved ideal. 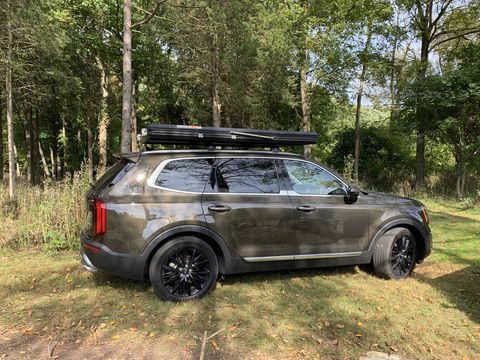 Roofnest is a rooftop tent company founded in 2016. And the Falcon is its top of the line model, of sorts, as it is the only one with an aluminum honeycomb, not plastic, shell. It’s also the most expensive, retailing at $3,395 or $3,495 dollars if you get the Flacon XL. It, effectively, mimics the shape of your classic triangle tent, except it is a right-angle triangle and is laid out such that either your feet or your head rests close to where the roof meets the floor. Its dimensions are 90-inches long and 50-inches wide, 60-inches if you get the XL.

And let’s get one thing out of the way. Absolutely, yes, the Roofnest Falcon is way more expensive than a regular tent, even a nice one, and simultaneously offers a lot less space inside. Right off the bat I fully concede there isn’t a value argument for this compared to your standard-issue pop-up.

But when it comes to value for money, there are some things to consider, especially as the parent of a toddler. The Roofnest is extremely easy to put up, leaving more time, and levels of patience, for the camping memories you want to create.

To set-up the Falcon, you pop two hinges and lift a handle. From there, two gas struts take over and finish lifting the tent into position. Afterwards, pull down an elastic strap running the perimeter of the tent to keep things tidy while stored. Then, install two small metal poles to put up a sort of rain-fly-like window protector. And that’s it. You’re done. 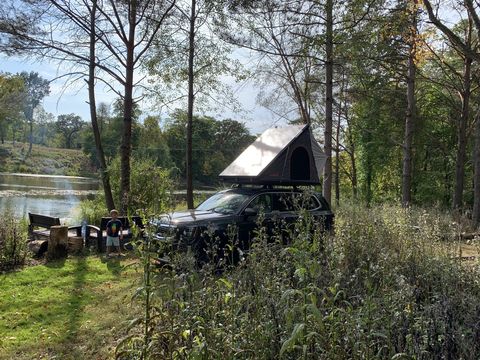 Attach the quick telescoping ladder, throw in your sleeping bag and call it a day. With a little practice, the procedure takes five minutes. And when you’re done, you have a 3-inch thick cushioned tent with a hard roof, good protection from the weather and a footprint no bigger than your car’s, save for the two legs of the ladder, I suppose.

When it comes time to tear it down, the process is even more satisfying. Once the tent is clean of sleeping gear and, in my case, transformer toys, you just squeeze the lid down and tuck the sides in and go. It made the perfect product to introduce my son to camping.

And that’s because as opposed to fussing with poles and worrying about him running off and finding a beautiful patch of poison ivy to roll around in, Harrison could very quickly climb in. He loved ascending the ladder; it was like getting the top bunk of the bed, every time.

After setting up the tent and throwing in sleeping gear, Harrison brought up his camping essentials: a handful of transformer toys. He flipped over his bag and let them fall onto the padded floor and an epic battle between Autobots and Decepticons commenced. We stayed cool in the shade with a nice breeze blowing across the tent. 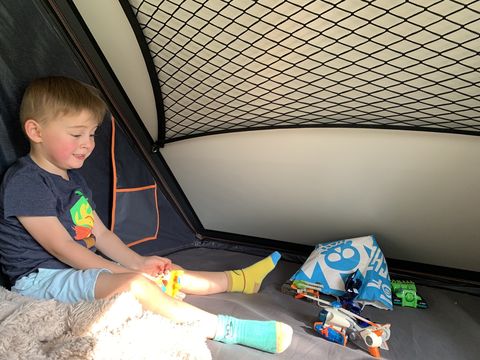 When good finally triumphed over evil, Harrison and I celebrated with a campfire and roasted marshmallows. Having a riverfront campsite, we hopped on a kayak and took a tour of the area. Harrison grabbed a stick and helped “paddle.” As we looked at the different trees, Harrison asked about all the different ducks and frogs and turtles we saw along the way. No noise other than nature and the paddle lapping against the water.

As the sun fell into the horizon and dusk transitioned to night, Harrison got a kick out of wearing a headlamp as we set up his pillow just so. Soon enough, the day’s activity caught up with him and he fell asleep, resting comfortable on the pad. It was a day of father/son bonding and not one I will soon forget. The Roofnest was a knockout success.

Of course, no one solution is perfect; Rooftop camping has its drawbacks, too. Bathroom breaks are a bit more involved, especially if you pull up the ladder. And, both the levelness of the tent and the direction it faces is at the mercy of the car it’s mounted on. Furthermore, having that triangle shape makes all the above more important, lest you’re okay with bonking your head in the middle of the night. Finally, there’s very finite space. There’s plenty of room for a father and son for a night, or two adults as long as they don’t mind being close, but much beyond that and it gets quite cozy. 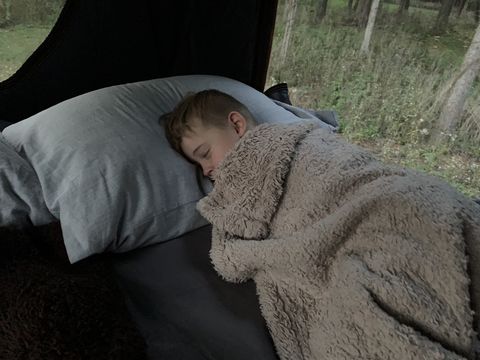 There is also the big rectangle you’re driving around with everywhere. Even though the Roofnest is less than seven inches tall, it took up the Telluride’s entire roof plus a little more. Furthermore, it both increases wind noise and decreases fuel economy when compared to a 20 lb. tent packed in a duffel bag in back.

On the other hand, it also hurts it a lot less than an actual camper. And, in the vast majority of circumstances, it’s just a normal car. The Roofnest is minimally intrusive; the Telluride drove normally with it attached. Really, it was all day easy and convenient to seek a little socially distant adventure.

You can’t control much of the world. Use the bits you can to make memories … and s’mores—definitely s’mores. 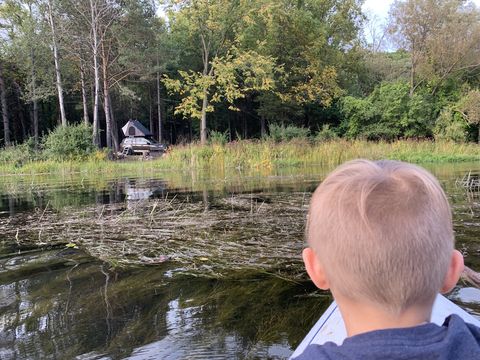