QUESTION
I have two questions I believe are related: ANSWER
Back in 1955, you (or your grandpa) might have posed a very similar question: “Why does that new-fangled small-block Chevy make more peak power and torque at a higher rpm than my trusty Flathead Ford?” The short answer: “Technology marches on.” Broadly speaking, modern Gen III–and–later LS engines benefit from nearly a half century of progress since the original small-block’s debut, many of which are thanks to the tribal knowledge gleaned by racing traditional Chevy V8s. Racers demand efficiency, but so do ever-tightening emissions and mileage standards. Some of the GM engineers who helped design various aspects of the LS engine were deeply involved in performance and racing, either in their “off” time or as the result of previous assignments to Chevrolet’s official racing programs.

It’s impossible to ignore the influence of the digital electronic revolution, both in terms of speeding up R&D evaluations of different designs and combinations as well as in the implementation of today’s electronically managed spark and fuel controls. But let’s look at the details as to just “why.” In most respects, the LS engine’s inherent architecture is superior to the small-block, as implemented on production-based engine assemblies. In the high-end, full-race, non-rules-limited classes, the so-called “traditional” small-block has also continued evolving, particularly in the cylinder-head department with improved, rolled-over valve angles and port layout. Here, we’ll limit our discussion to parts actually installed on production engines.

To a large extent, it all begins with the cylinder heads. One can more or less predict the power potential of a given-displacement, normally aspirated engine based on its cylinder-head intake-port flow numbers. As Comp Cams’ Billy Godbold puts it, “The greater the cylinder head’s intake-port flow, the less cam you need to make the same power at the same rpm. Or, with similar-duration cams, higher-flowing heads will raise the rpm points where peak torque and power will occur.” Because horsepower is a product of torque over time (rpm, in the case of an engine), a higher torque peak acts as a multiplier, significantly raising the horsepower produced, and that higher power output will occur at a higher rpm.

“The worst LS head is better than the best production-line small-block Chevy head,” says pro engine builder Ken Duttweiler. As delivered, the best-flowing traditional Chevy small-block cylinder heads were the mid- to late-1990s Vortec truck heads. Despite having just 1.94/1.50-inch valve sizes, they outflow any previous stock-production head—even those with 2.02/1.60-inch valves—primarily due to a very sophisticated factory valve job, repositioned spark plugs, and a quick-burn combustion chamber. But the valve angle is still 23 degrees, just like all other production classic small-blocks. At best, a stock Vortec cylinder head flows maybe 215–220 cfm at 28 inches of water at 0.500-inch lift and stalls or drops off from there. 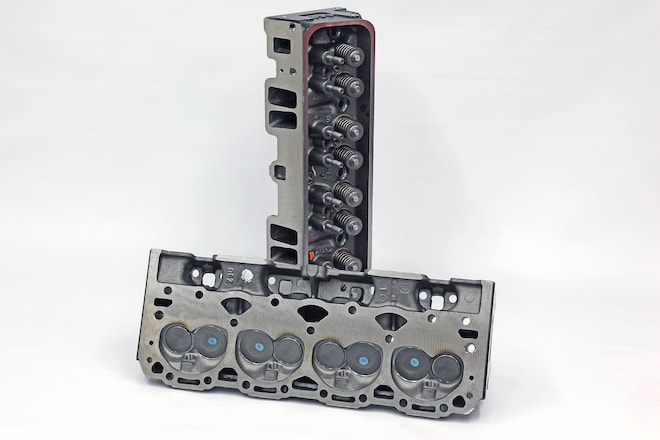 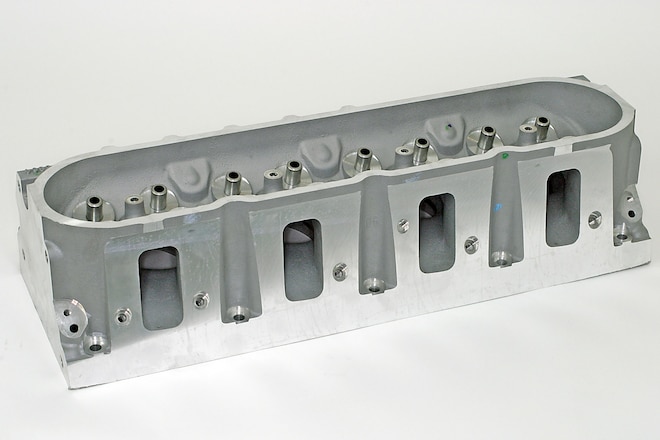 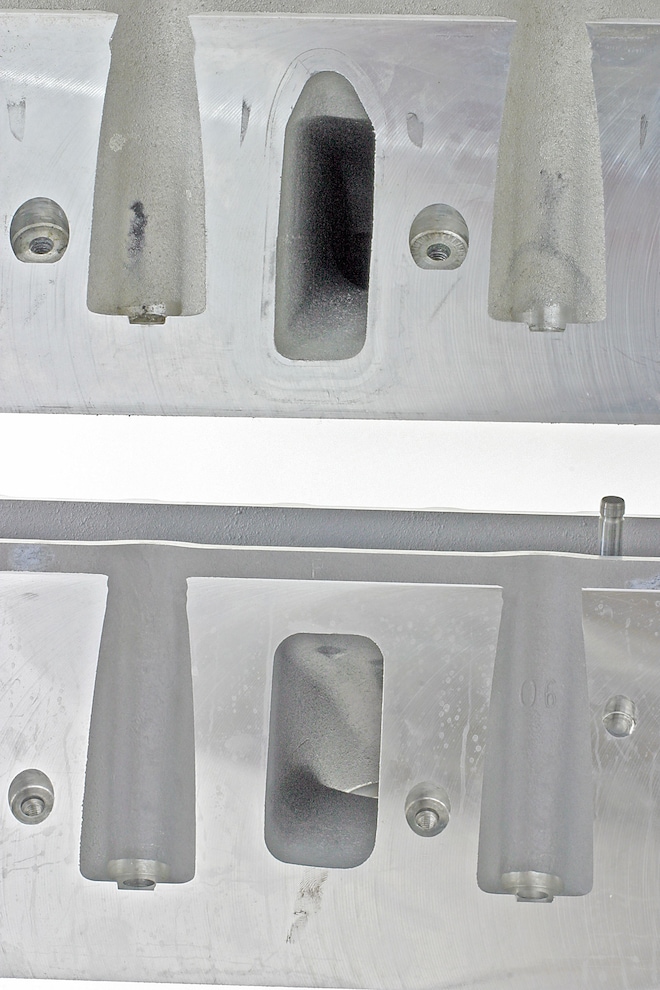 A decisive factor for improving flow is giving the air/fuel mixture as straight a shot as possible in the approach to the valve seat. In a perfect theoretical world absent hood-clearance and packaging constraints, the optimum approach angle is near-zero. In the real world, traditional production small-block heads were designed with a 23-degree valve angle off vertical (aka, a “23-degree head”). LS Gen III/IV heads (except the LS7) all have a shallower (and therefore superior) 15-degree valve angle, similar to many improved aftermarket hard-core racing heads for traditional small-blocks. Moving up to an LS7 head gets you a 12-degree valve angle. 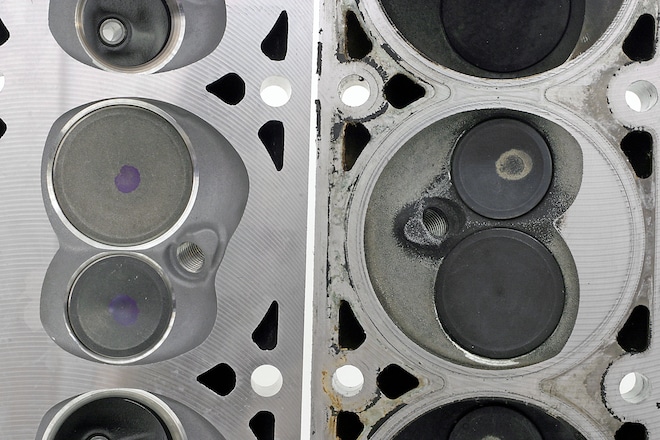 Combustion-chamber layout and spark-plug positioning is superior on the LS. Intake manifold design is better. LS exhaust ports flow more and are equally spaced. On an old small-block, the two center exhaust ports are siamesed, which can limit header design but also makes those center cylinders run hotter. 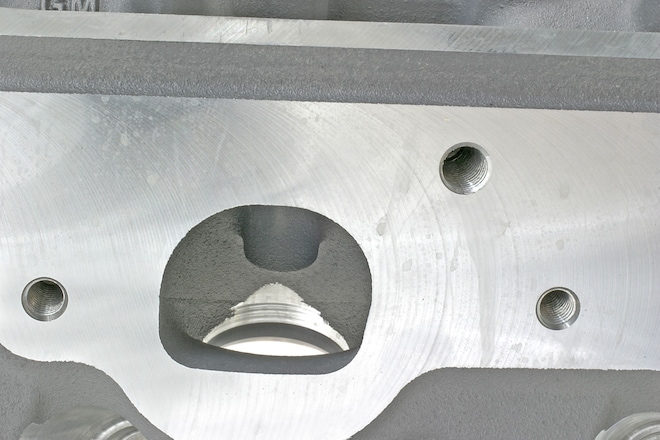 So, yes, the LS responds better to a cam change due to much better cylinder heads, but there are also many other “little things” that incrementally combine to further enhance the LS architecture’s performance potential. Compared to the old small-block, the LS’s cylinder-block deck height is slightly taller and the camshaft centerline is moved up in the block. The LS’s cam journal diameters are larger, which both stiffens the cam and gives lobe designers more flexibility. “It’s easier to design a lobe on a big journal,” Duttweiler says. And a stiffer cam billet doesn’t bend, meaning less high-rpm deflection. 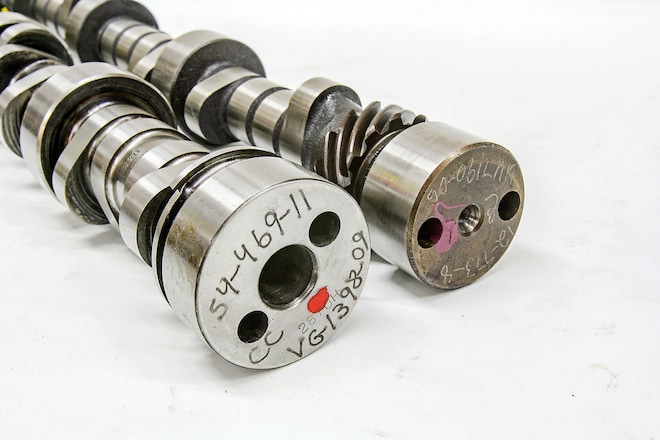 LS pushrods are shorter than the old small-block, making them stiffer. Stock LS rocker arms are stiffer and lighter than stock small-block rockers, and their 1.7:1 ratio (same as a big-block Chevy) increases valve lift with a similar-duration cam that sees only a 1.5:1 multiplier in an old stock small-block.

The stock LS rocker arm also has a friction-reducing rollerized fulcrum. LS engines have lightweight 8mm (0.314961 inch) valve stems compared to small-blocks, which had ¹¹⁄₃₂-inch (0.34475-inch) valve-stem diameters stock. With the LS’s lighter, stiffer valvetrain, valvespring seat pressures with a given cam can be reduced. The only downside is that production LS valvetrains are nonadjustable. Still, LS engines, says Duttweiler, “just love to rev. They’ll go to 6,700 rpm before valve float with stock cams, up to 7,500 rpm with available aftermarket valvesprings. Lightweight valvetrain, good airflow, better cams: That’s the ticket to performance.”

Except for the tiny 4.8L and big 7.0L LS7, LS motors have a 3.62-inch stroke with 6.098-inch center-to-center connecting rods that yield a rod/stroke (R/S) ratio of 1.68:1, slightly higher than the 305/350 old-school motors’ 1.64:1 generated by 5.7-inch rods and a 3.48-inch stroke. Assuming equal displacement and the same stroke, a higher R/S ratio tends to move the powerband higher, and the torque and power peaks closer together. But the LS motor has a slightly longer stroke for roughly equal displacement and still maintains a decent R/S ratio. This keeps piston speed under control without sacrificing low-end torque. Compare that to the “worst-case” old-school 400 small-block with its 3.75-inch stroke and 5.565-inch center-to-center stock rod that yield a terrible 1.48:1 R/S ratio, leading to increased friction, cylinder-wall thrust-loading, and wear—all parasitic horsepower losses.

LS pistons use thin, lightweight, 1.5mm-1.5mm metric compression rings and 3.0mm low-tension oil rings, but old-school small-blocks used heavy, clunky ⁵⁄₆₄-⁵⁄₆₄-³⁄₁₆-inch rings. Thinner rings have less friction and allow a shorter, lighter piston, improving performance assuming the bore is round—but factory honing techniques have vastly improved. A more efficient bottom end translates to less internal pumping losses, meaning lower crankcase pressures. “The piston is not pulling against vacuum,” Godbold explains. “For heavy pickup trucks, this means greater mileage and throttle response. For performance use, this also tends to make for a better-flowing intake and exhaust.” With the introduction of rectangular-port heads even on heavy pickup trucks, my colleague Jeff Smith points out in a JE Pistons blog post that “engineers were actually more interested in minimizing pumping losses at part throttle by manipulating the throttle to reduce light-throttle engine vacuum in an attempt to improve fuel mileage.” But we’ll take it any way we can get it.

And that also sort of answers your second question: LS engines generally don’t seem to benefit as much as an old small-block when moving from stock exhaust manifolds to equal-length headers because of their reduced pumping losses, but also because today’s factory exhaust manifolds are superior to those used on old-school small-blocks. Nevertheless, as one moves up the performance food chain to a high-end, hard-core motor, headers remain important for achieving max performance. “Scavenging is scavenging,” as Richard Holdener likes to say.

Does the LS architecture have a downside? As I see it, the only major “giveaways” to a traditional small-block are a production LS has only four head bolts/cylinder compared to the traditional small-block’s five, and for all-out racing, the old small-block’s skirtless bottom end may have superior oil-windage characteristics. But the LS’s deep skirt does add strength to the aluminum blocks plus permit cross-bolting the main caps. If these LS downsides are deal-breakers, the aftermarket offers hybrid blocks with a small-block–like bottom end that accept LS-type cams and cylinder heads (see “Going Exotic,” below).

Finally, let’s look at some actual dyno runs between a small-block and LS engine with similar camshafts. On Westech Performance’s engine dyno, Richard Holdener ran a carbureted 350 classic small-block with stock Vortec heads against the “little” small-valve 5.3L (325 ci) Gen III EFI engine using stock cams and then with similar-duration aftermarket performance cams. Installing a performance 224/231-degree (at 0.050-inch tappet lift) cam, the classic picked up 65 hp, going from 278 hp to 343 hp. The 5.3L Gen III 5.3L gained 97 hp over its stock 352hp output with a 224/232-degree cam. Nailing the coffin shut, Holdener remarks, “The 350 with the 241/231-degree cam didn’t make as much as a stock 5.3 LS! The 5.3L is better in every way, except displacement, compared to the older 350.” But there are always 6.0L, 6.2L, and 7.0L factory LS engines waiting in the wings! 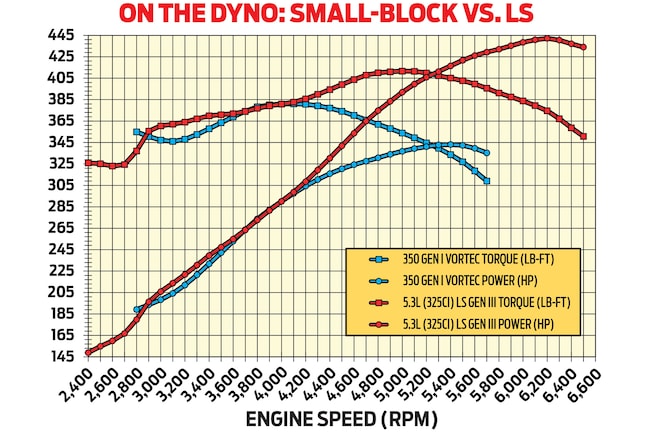 The bottom line is that on the LS, factory engineers have built in efficiency to achieve better mileage and reduced emissions. This is a big departure from early first-generation, emission-controlled engines that reduced engine efficiency and mileage. The OEs may have did it to please Uncle Sam, but the result for emissions-exempt, high performance and racing, usage is vast performance potential waiting to be unleased. 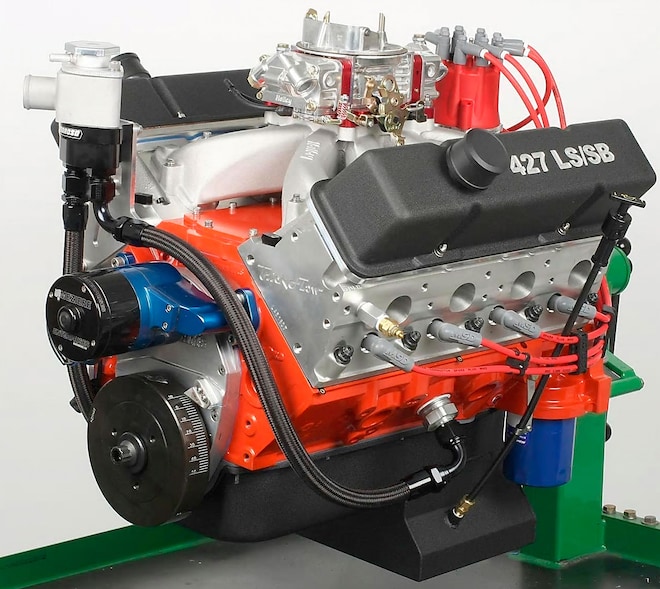 The “best” small-block-based engine may not be a pure LS block and heads but an amalgam having the best attributes of both the early classic (Gen 1) and the LS (Gen III/IV) series. About 10 years ago, Bill Mitchell developed the Motown Warhawk III block that essentially has a classic Gen 1 small-block lower end for improved windage; uses the higher LS deck height with raised LS-type large-journal cam (but with a rear distributor gear added on); and directly accepts the LS heads, lifters, valvetrain, valley cover, and intake manifolds. 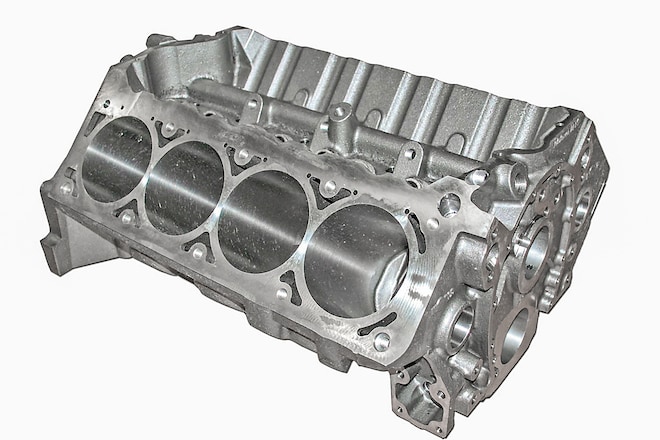 Back in 2009, World Products and Mitchell compared similar 427ci small-block engine packages but with different-generation blocks and heads: a Gen I–style small-block built using its Motown block and Motown 23-degree-valve-angle, conventional, small-block Gen I–style cylinder heads; a Gen III LS package using its Warhawk Gen III block and Warhawk Gen III cathedral-port heads; and its then-new hybrid Motown LS block with the Warhawk Gen III heads. All heads were unported and as-cast. The Warhawk all-LS engine had a 1.4-point-higher compression ratio than the all-Gen I, a slightly higher cam lift (it had the LS-series’ stock 1.7:1 rockers versus nonstock 1.6:1 rockers for the Gen I), and a little bigger carburetor—figure these differences at most are worth about 2 to 3 percent. 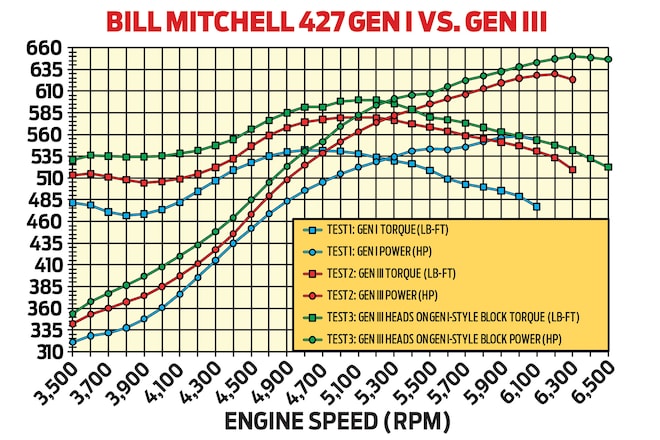 Even more intriguing is the hybrid combination utilizing the Motown LS block and Gen III heads. Despite having a one-point-lower compression ratio than the pure-LS package, the hybrid was worth about another 20 hp and 20 lb-ft (650.1 hp and 599.7 lb-ft). Mitchell attributes this to the original small-block’s superior windage: The short-skirt Gen I–style block casting accepts a sophisticated aftermarket oil pan with ample side kickouts (indeed such a pan was used in these tests); the Gen III’s Y-block bottom end precludes this type of pan. Of course, one could always add a dry-sump, as used stock on the LS7 and other Corvette engines. GM LS3 and LS7 production heads—with their big, rectangular ports—are yet another order of magnitude superior (World now has its own rendition of rectangular-port heads as well).

Without going to the hybrid block and LS heads, the only way a classic small-block guy could achieve these kind of numbers in an all–Gen I engine would be moving up to high-end (and high-buck) race heads with rolled-over valve angles, symmetrical intake-port NASCAR SB2-style heads, or ultimately big-block–like splay valve heads with symmetrical intake and exhaust ports. These heads are all designed for a 4-inch or even a 4.125-inch bore, with ports and manifolds sized for high rpm. The shallower valve angles permit tiny combustion chambers (as small as 35 to 37 cc on some full-race heads). Hybrid blocks continue to be offered by Bill Mitchell Products to this day.