As we all know by now, household 3D-printing can lead to some amazing creations—like semi-functioning V12 engines designed in a little over two hours, for example. However, as the technology keeps filtering down from the aerospace and motorsport aces into both regular road car production and the classic car restoration scene, king of the cylinder wars Bugatti has the ambition to become the leading force in selective laser melting at the highest end of the market. Three years ago, Bugatti surprised the world by showing off the largest eight-piston titanium brake calipers 3D-printed for the Chiron, which measure 12.2-inches by more than eight inches.

The experimenting hasn’t stopped since, and after revealing its track-only concept, the 1,825-horsepower Bolide, it’s time we learn more about what hollow printing could do for Bugatti’s most daring idea to date. Designed by a 27-year-old and described as being “the ultimate statement” by renowned supercar styler Frank Stephenson, the Bolide is not only the lightest representation of VW’s insane quad-turbo W16 powertrain, it’s also a technological testbed filled with advanced material solutions, pioneering active aerodynamic features, and enough printed titanium to make a Le Mans prototype jealous. 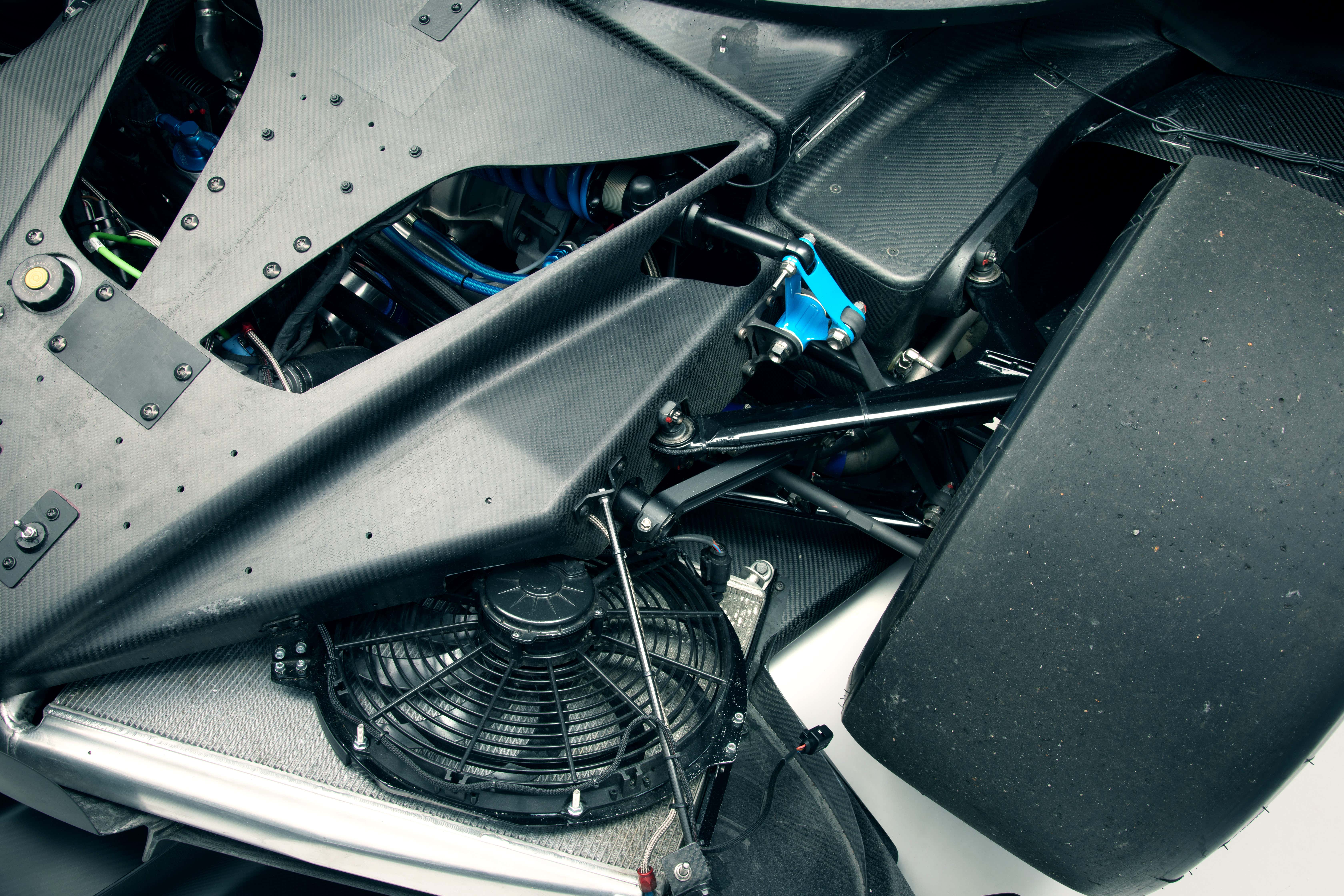 The Bolide is actually a real car that drives, yet we don’t know how far Bugatti will be willing to push it outside the digital space, despite calling it “a road-ready extract” as of today. Simulated stats aside, the car’s individual components are undoubtedly masterpieces of modern engineering and a preview of what’s next in the sports car segment.

As for where Bugatti was just three years ago, this is the kind of fireworks the Chiron’s titanium calipers produce under heavy loads, like slowing down from 300+ miles per hour:

At Bugatti’s new technologies department, the selective laser melting project is lead by Henrik Hoppe, a doctoral student who wrote his master’s thesis on a calculation methodology for the 3D-printed titanium brake caliper. Creating hollow, yet stiff and strong parts using a technology called selective laser sintering, Bugatti’s brake caliper became 43 percent lighter than the standard alloy piece. For the Bolide and what’s beyond Bugatti’s track-focused concept, Mr. Hoppe now focuses on the commercial and technological potential of specific series-production components, hoping to crack the case for his doctoral thesis as well.

Throughout this process, the company has already refined its 3D printing capability to accuracy as fine as 0.1 millimeters. In the Bolide, the resulting three-dimensional bone-like structures take high loads despite featuring thin walls, a hollow interior, and fine branching. Using titanium powder, wall thicknesses of these bits can go down to just 0.4 millimeters.

As for the specific parts, let’s start with the Bolide’s forged magnesium wheels. Interestingly, they come with Group C-style radial compressors that pump the used warm air through the brakes to the outside of the wheels. To achieve this, the wheel is a hybrid of a central bowl made of 3D-printed titanium with a thickness of 0.48 millimeters, and a 0.7-millimeter thick carbon plate with small inner blades also made of carbon fiber. Bugatti says that cross-pieces with a width of 0.48 millimeters further increase the rigidity of the central titanium bowl, which weighs just three and a half ounces (100 grams). Using this construction, the total weight of the 18 ¼-inch turbofan on the rear wheels is under 14 ounces (400 grams). 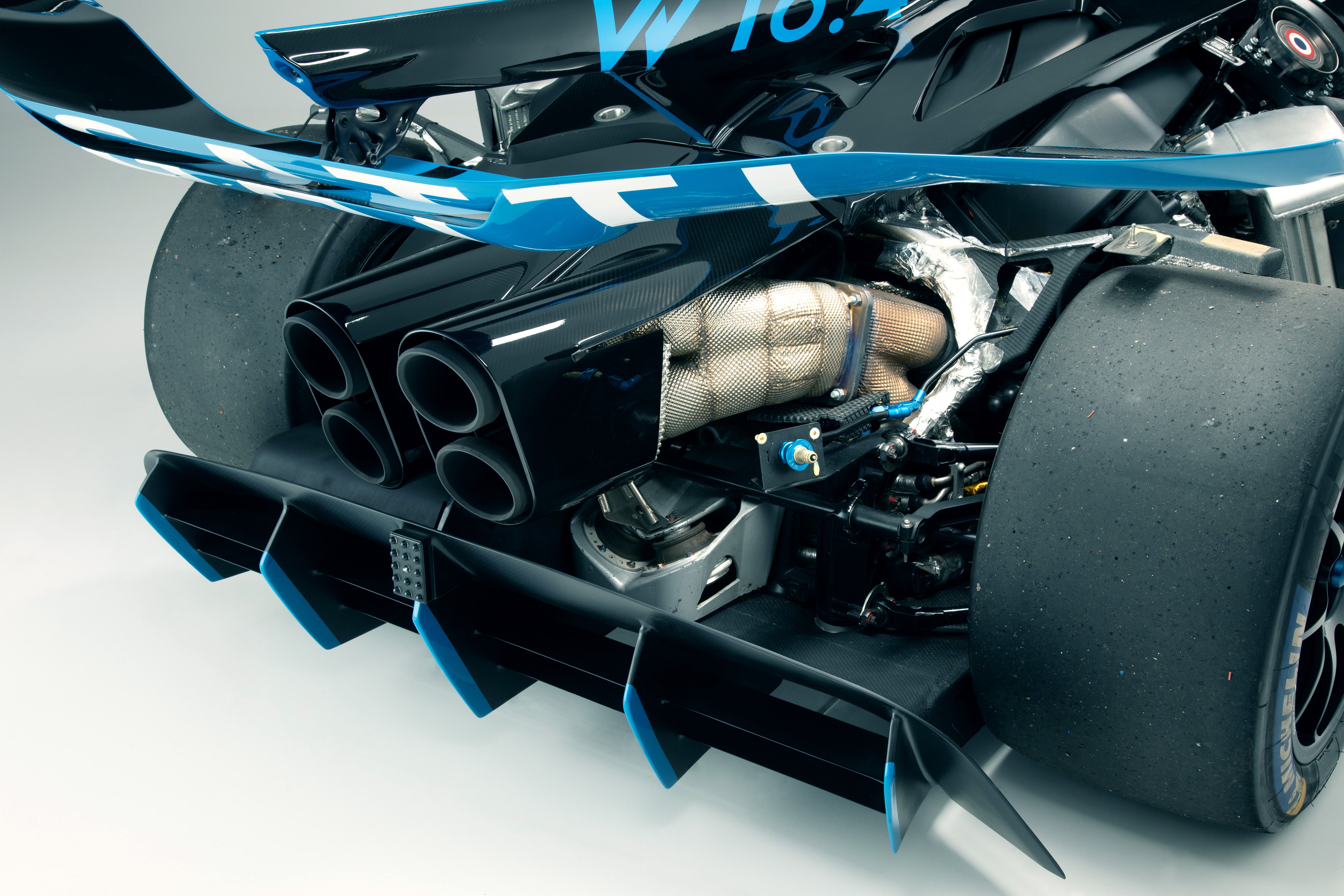 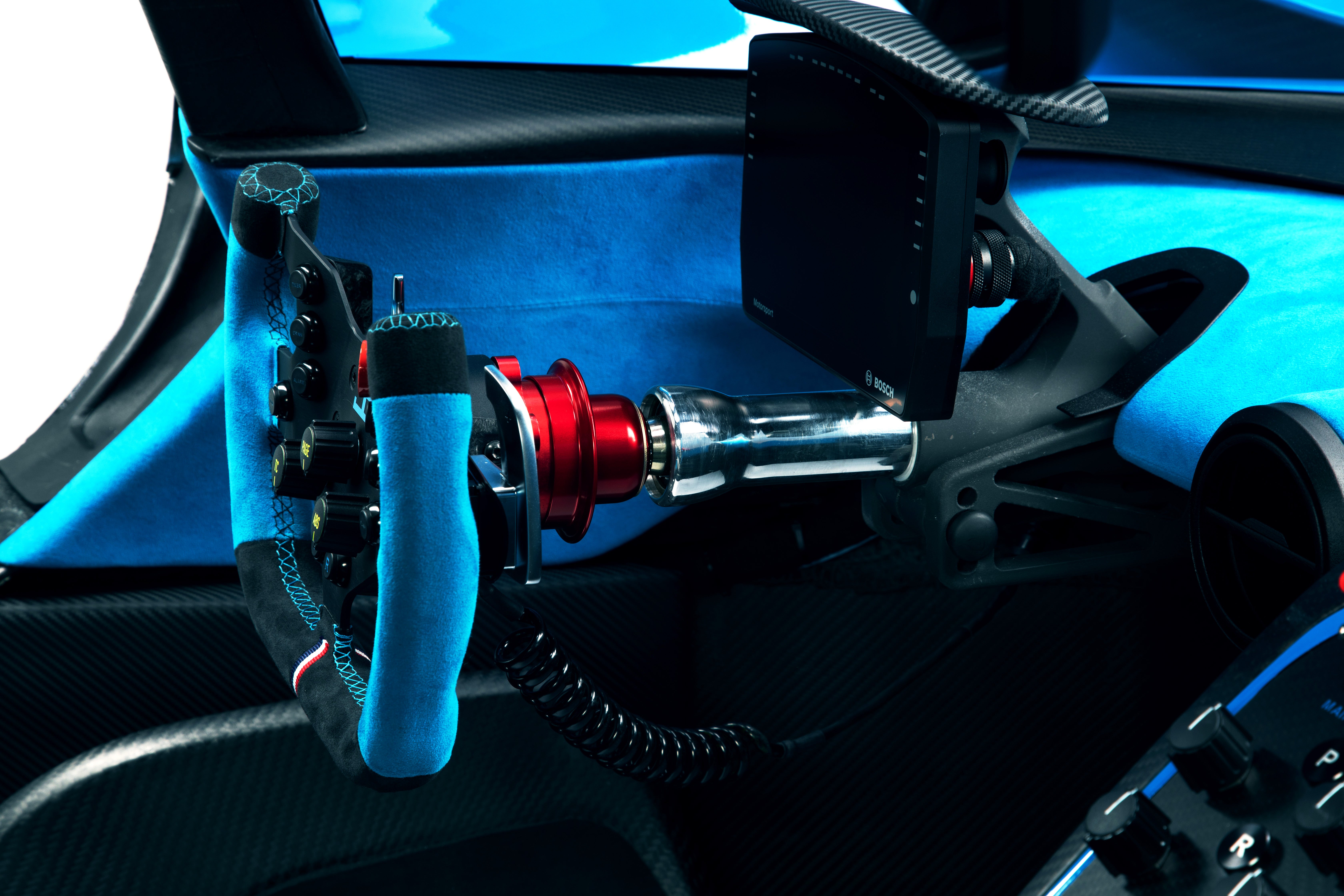 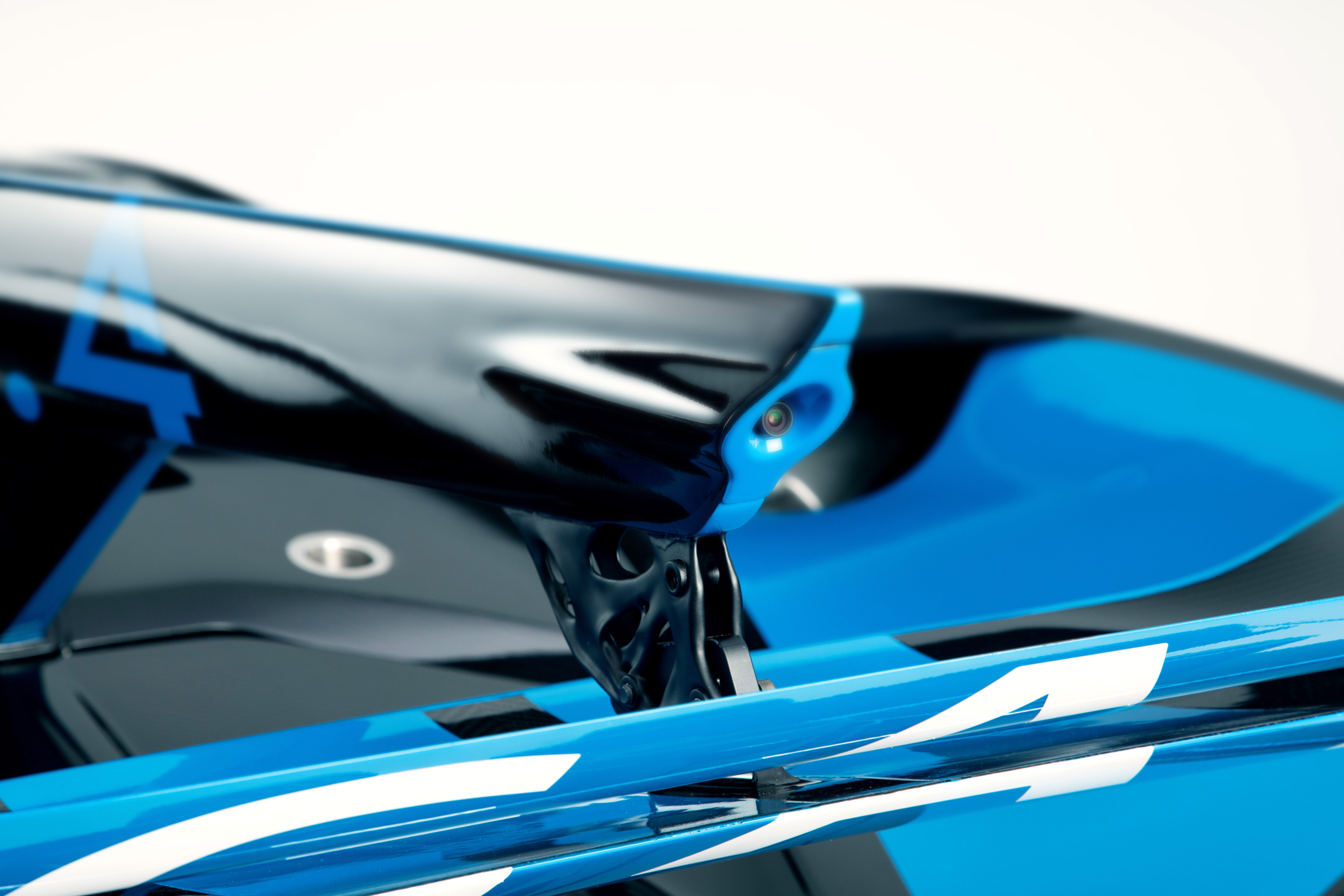 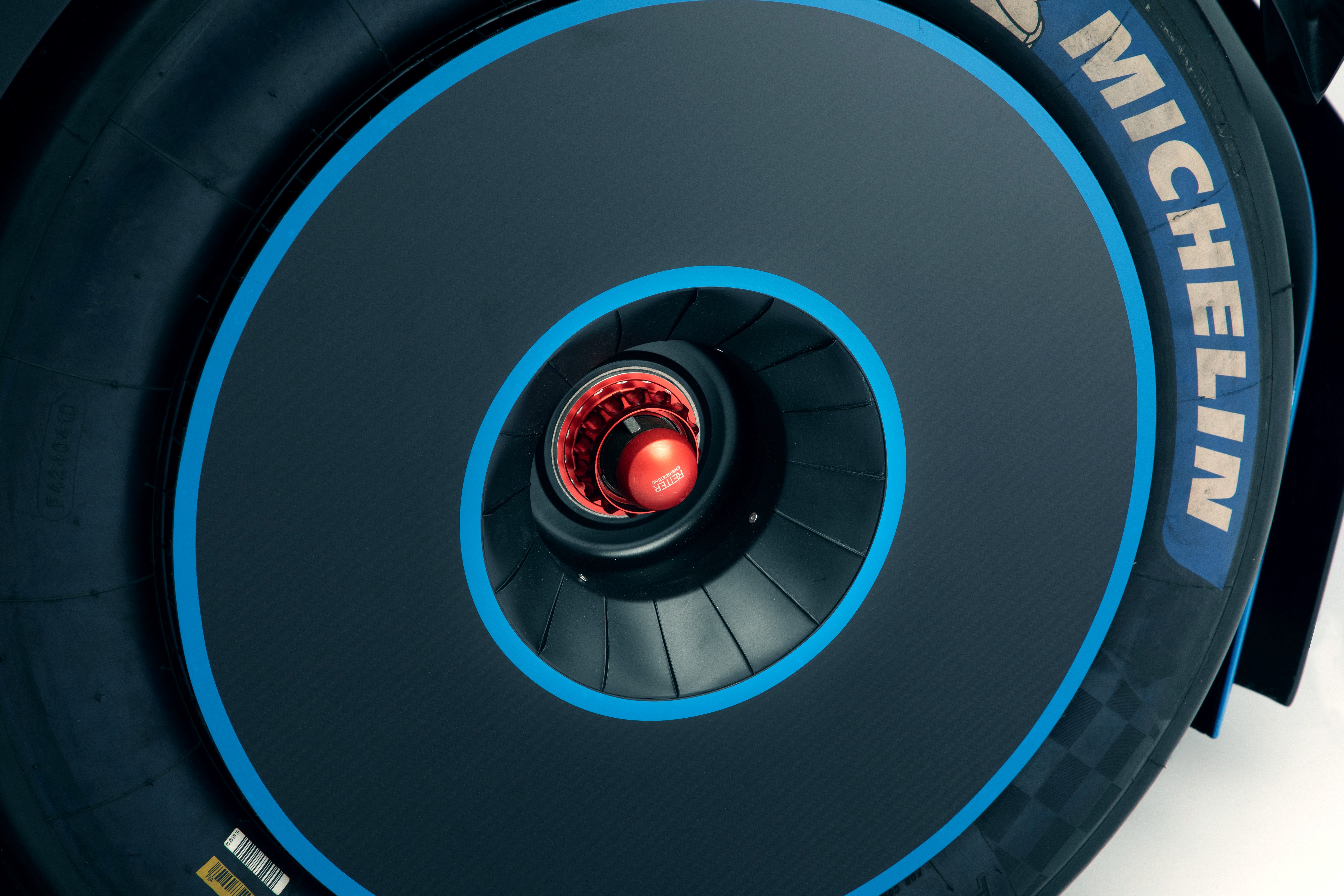 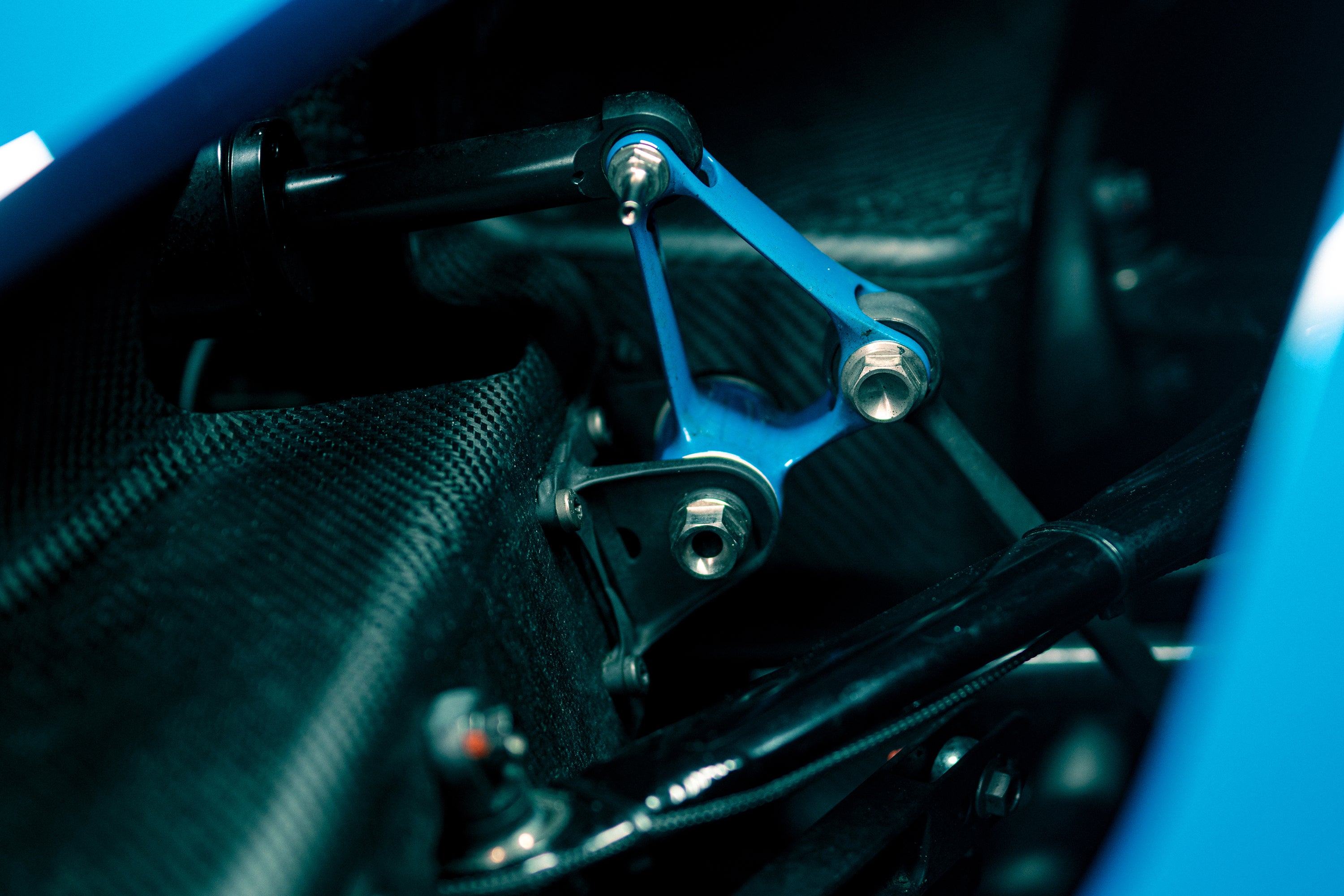 The list continues with a mounting bracket for the front wing, which allows for three height settings and comes as a hollow titanium piece with a wall thickness of 0.7 millimeters. It’s rated for 1,763 pounds of downforce while weighing just 1.32 pounds. The rear wing assembly is mostly made of carbon within a steel frame, yet inside the central fin, there is a laminated and printed titanium component for connecting it to the wing. 11.46 ounces is what it gives to the Bolide’s theoretical total of 2,700 pounds.

With other suspension components like brackets and springs printed and optimized in thickness for both stress and aerodynamics, perhaps the most impressive bits are the Bolide’s pushrods that need to transfer enormous dynamic forces into the rockers. With their internal structure recently registered as a patent, these 3.52-ounce pieces of fancy metal can take the punch of 3.85 tons. 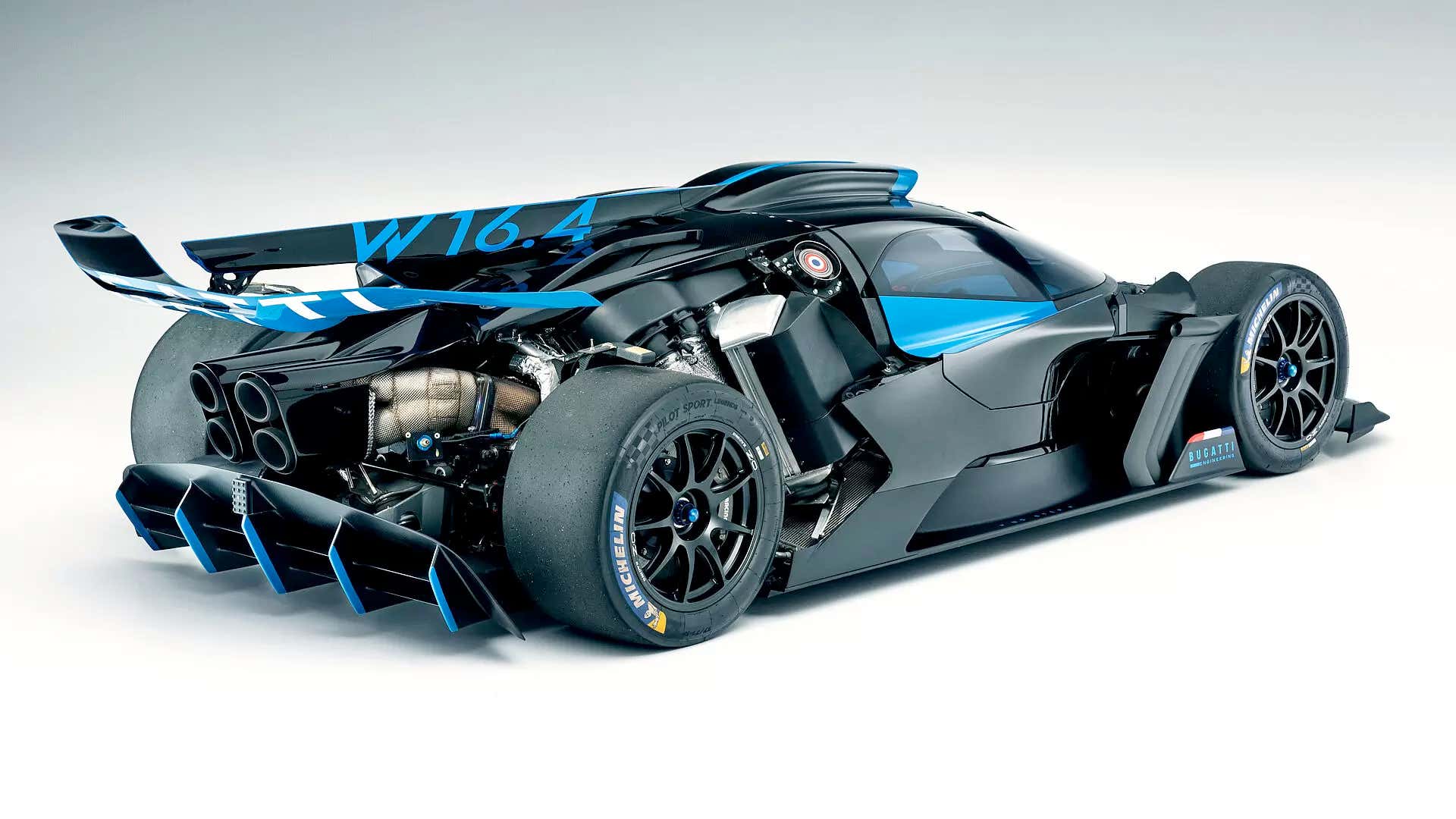 Last, but not least, Bugatti has submitted a patent application even for its Bolide tailpipe trim cover. The hybrid component is made of printed titanium and ceramic, and weighs around half of what a Chiron’s already lightweight standard titanium part. This experimental one is 280 millimetres in length and has a consistent wall thickness of just 0.5 millimetres, resulting in a weight of just 26.45-ounces (750 grams). Bugatti says that because ceramic material is a “significantly less effective heat conductor than titanium”, they’ve introduced special ceramic elements that are built into the titanium housing and center the cover with respect to the carbon outer skin, so that the outer skin is not damaged even at high exhaust gas temperatures. This thermal shield is also supported by a built-in Venturi nozzle, so when hot exhaust gas enters the tailpipe trim cover, fresh air is drawn in. At the end of the day, this solution is so complex and light that understandably, Bugatti wants to own the patent.

Frank Götzke, head of new technologies at Bugatti, says that their 3D-printed titanium elements’ tensile strength is 1,250 N/mm2, while thanks to a heat treatment process also developed in-house, they achieve a simultaneously high fracture strain of at least 19 percent. That doesn’t tell me much, yet looking at the Bolide, I’m ready to take his word for it.

Bugatti Bolide with only a few cover pieces missing.