If you had been complaining all this time that the regular Lamborghini Huracán Performante lacks some Performante, Lamborghini finally has something for you. Say hello to the Lamborghini Huracán STO. STO stands for Super Trofeo Omologata and it applies everything the automaker’s Squadra Corse racing arm has on its shelves to make the car harder, better, faster, stronger, and somehow even more futuristic than the regular Huracán.

What’s under the STO’s skin?

A lot of racing tech plus more power, minus quite a bit of weight. Lamborghini reworked a lot of the Huracán’s interior while adding more carbon fiber to the exterior panels. The car is 75% carbon fiber, making the STO 95 lbs. lighter than the standard Huracán Performante. This includes a thinner windshield and magnesium wheels helping to shave off the extra pounds, the latter wearing bespoke Bridgestone Potenza tires. Much of the exterior skin is different as well, including a redesigned rear hood with an integrated air scoop and integrated air deflectors. A new rear fender borrowed from the Super Trofeo EVO has been added as well, along with a shark fin on the rear hood to improve high-speed stability.

The front hood, bumper and fenders are all one piece now to reduce weight, as in motor sport, and as you’d expect the front hood now features redesigned air ducts to aid in engine cooling and generate downforce. The adjustable spoiler out back, meanwhile, allows the car’s aero balance to fluctuate 13% by rotating the front part of the airfoil to three different positions. All these tweaks mean the STO now offers the highest level of downforce in its class, featuring a 53% increase in downforce over the standard Huracán Performante, as well as a 37% improvement in overall airflow efficiency.

But the improvements to aerodynamics are just a part of the whole recipe. 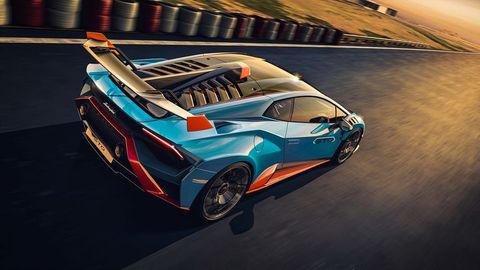 The automaker has added a stiffer suspension bushing while also increasing the STO’s wheel track. Lamborghini has also given this version of the Huracán a more direct, fixed steering ratio, along with rear-wheel steering. Add to that the automaker’s MagneRide 2.0 system and Brembo CCM-R brakes with maximum brake power improved 25% and stress resistance 60%, and you have something ready for the main event: The V10 borrowed from the Huracán EVO and Super Trofeo, good for 640 hp and 417 lb-ft of torque. Power is sent to the real wheels (and only the rear wheels) via a seven-speed dual-clutch transmission.

Even with power sent only rearward the STO can launch itself from 0 to 60 mph in 3.0 seconds, thanks to grip from Bridgestone Potenza tires. They’re available in two versions: track-focused and road-focused. And they’re enough to allow the STO to cruise at a 192 mph top speed. We’d probably get both sets, as STO buyers probably will.

Just like just about any car these days, the Huracan STO offers different driving modes. Except since this is an Italian supercar we’re talking about, they get a cool-sounding Italian name: ANIMA. Except it’s not Italian at all, it stands for Adaptive Network Intelligent MAnagement, sounding like an evil corporation from a sci-fi movie. (But we can still pretend it’s Italian and pronounce it with an Italian accent). You get three ANIMAS: STO, Trofeo and Piaggio. The STO mode is best for curvy roads and general road driving, but even in this mode the fully active ESC can be switched off. Trofeo is more track-focused, offering settings optimized for dry asphalt, with the Lamborghini Veicolo Dinamica Integrata (LDVI) vehicle dynamics system offering dedicated torque vectoring and traction control settings optimized for lap timing and straight sprints alike. Pioggia is for rain, on those days when you’ll be using the STO to fetch some food at a drive-thru on a gray day before driving back home to play some vintage Nintendo. 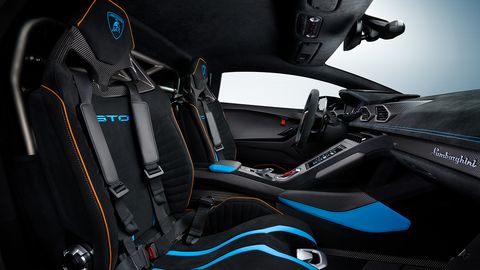 Would you take the STO to a socially-distanced drive-through window, or would you take one of plusher Lamborghinis you already own? We have a feeling STO buyers have a regular Huracán at home already, with a more drive-thru friendly interior. The STO’s cabin goes heavy on carbon fiber, and by heavy we mean light. The seats are carbon fiber, the floormats are carbon fiber (yes, really) and the door panels are carbon fiber as well. Not everything is carbon fiber, and those pieces that aren’t are Alcantara and Lamborghini’s Carbonskin. But there’s still an infotainment touchscreen, one designed for racing-related information more than entertainment. It includes a fully connected telemetry system, allowing drivers to record and monitor their track driving later on, using the Lamborghini UNICA app.

“The Huracán STO delivers all the excitement of a beautifully balanced, lightweight and aerodynamically superior super sports car, mirroring the driving feeling and exhilaration of Super Trofeo, and perfectly set up for the world’s most demanding tracks but created for the road,” says Maurizio Reggiani, Chief Technical Officer. “The extensive technical solutions and intelligence gained from both our Super Trofeo and GT3 programs has been refined and embodied in the Huracán STO, allowing the pilot to experience the emotions of a racing driver, daily, in a road-legal Lamborghini super sports car able to take lap records.” 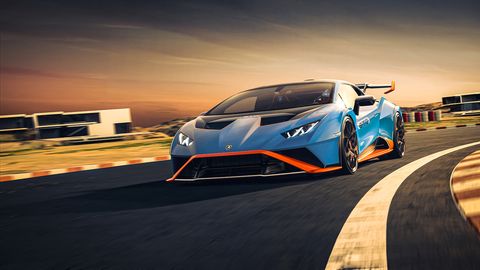 Performance like this won’t come cheap… unless you already own a Huracán or some other Lambos and such things are relative. Plan to set aside $327,838 before taxes between now and next spring, when the Huracán STO begins shipping to store shelves. But there are ways to pay even more for one if you choose Lamborghini’s Ad Personam personalization program. It offers paint and trim combinations the automaker describes as “limitless.” Multiple liveries will also be on the menu, even though the Huracán STO wears the Blu Laufey and Arancio California launch livery seen in these photos.