Last week’s Formula 1 Italian Grand Prix taught us all a lesson when it comes to racing.

You just never know. You think you know. But you don’t know.

Pierre Gasly’s F1 win from seemingly out of nowhere was a welcome wake-up call to racers everywhere who call themselves underdogs and to fans who figure they know who’s going to win. Racing is unpredictable. Even Formula 1.

So, who’s going to be the story this week?

Here’s were to tune in to find out:

Why it is a Must-See: Formula 1 is coming off of one of it’s most interesting races in years. For the first time since 2013, a driver outside of the big three teams Mercedes, Ferrari and Red Bull, in this case AlphaTauri’s Pierre Gasly, won a race. Sure, there were contributing factors, but for one day anyway no one could accuse of F1 of being boring. 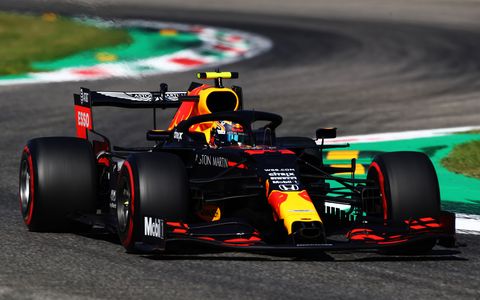 • Plenty of 1-on-1s to keep an eye on this week, including Alex Albon at Red Bull and Gasly at AlphaTauri. Last year, Albon was promoted from the Red Bull junior team and Gasly was sent down. This time around, the calls are coming for Gasly to replace Albon at Red Bull. And, with Gasly’s win last week, it’s getting harder to argue Albon’s case.

• Another 1-on-1 worth watching is over at Racing Point, where management this week announced that it was releasing Sergio Perez at season’s end to make room for Sebastian Vettel. In reality, Perez probably never had a chance to keep his seat, if someone had to go to make room for the four-time champion. After all, Perez’s teammate Lance Stroll just happens to be the owner’s son.

• Speaking of Vettel, with his near future now figured out, it will be interesting to see how his Ferrari career finishes up. He’s winless in 2020. He’s not had a winless season since 2016.

• The Mugello Circuit is a true wild card this year. This will be the Italian track’s first Formula 1 race.

Why it is a Must-See: This is the second race in the three-race opening round of the NASCAR Cup Series Playoffs. Bottom four drivers in the standings after next week’s Saturday night race at Bristol can start thinking about 2021.

• The pressure this week is on the four drivers at the bottom of the Round of 16 qualifiers. That means Clint Bowyer, Cole Custer, Matt DiBenedetto and Ryan Blaney will be pulling out all the stops on Saturday night. Of this group, Bowyer has the only Cup wins there (2008 and 2012).

• Ryan Truex is sixth in the standings and is a safe bet to make it to the Round of 12. He’s also won the last two Cup Series races at Richmond. Before that, it was his Joe Gibbs Racing teammate Kyle Busch winning back to back.

• Kyle Busch is 10th in the standings and he’s coming to Richmond at just the right time to solidify that spot in the next playoff round. He leads all current Cup drivers with 22 career top-10 finishes at Richmond in 30 starts.

• On the Xfinity Series side, there are three races until the 12-driver playoff field is set. Two of those races are back to back this weekend. There are three drivers in realistic contention for the final Playoff spot. Brandon Brown has a 12-point advantage over 13th-place Jeremy Clements and 51-point lead over Myatt Snider. Of course those lower in the standings can always win their way in.

• NASCAR Trucks kick off the action on Thursday night with the final race of that series’ regular season that will decide the 10 drivers to advance to the playoffs. Derek Kraus enters Thursday’s race in 11th place, 10 points back of Todd Gilliland for the final spot.

Why it is a Must-See: With just five races left in the season, this week’s doubleheader might just be several drivers’ last shot at showing that they are a contender for a championship. Scott Dixon has a 96-point lead over defending series champ Josef Newgarden and 119 over Pato O’Ward. Consider the rest of the field longshots.

• Dixon is the defending race winner and has won at Mid-Ohio six times in the NTT IndyCar Series.

• On second thought, maybe it’s OK if Dixon and Chip Ganassi Racing go ahead and order up the Champagne. Since 2008, the championship leader with five races to go has gone on to win the championship six times: Scott Dixon (2008 and 2018), Dario Franchitti (2011), Ryan Hunter-Reay (2012), Simon Pagenaud (2016) and Josef Newgarden (2019). The 96-point gap between Dixon and Newgarden is the largest point margin with five races to go since 2008. Game. Set. Match.