It was always easier to build outward than upward during NASCAR’s expansion era.

That is how the Cup Series schedule became populated with so many tracks over a mile in length, venues that did not stand the test of technological development, producing some of the most lackluster events over the past two decades.

Auto Club Speedway, a two-mile superspeedway 50 miles east of Los Angeles, was once the embodiment of NASCAR’s manifest destiny.

A pristine facility built by Roger Penske in the 90s, the California Speedway was sold to International Speedway Corporation, and ultimately awarded a second date on Labor Day weekend at the expense of the Southern 500 at Darlington Speedway in South Carolina.

It was a deep betrayal to NASCAR’s most devoted audience, and a mistake that was rectified a decade later, but only after the damage had been done.

Worse yet, NASCAR then delivered these new markets something that wasn’t even representative of what made the sport so compelling in the first place — close-quartered racing that emphasized contact and intensity.

NASCAR essentially became IndyCar with roofs at venues that offered suites and casinos but little action.

At last, it appears as if NASCAR is moving towards a course correction of sorts.

Auto Club Speedway will undergo a significant transformation prior to the 2022 season – downsizing to a half-mile that borrows the straightaways from Martinsville Speedway and the high-banked turns of Bristol Motor Speedway.

There are multiple incentives for NASCAR to do this.

The land near the speedway has become increasingly more valuable over the past decade and NASCAR’s attendance has only dwindled during that time.

From NASCAR’s standpoint, the decision to reduce the footprint of the racing surface in order to sell or lease the remaining 600 acres is a no-brainer — as it can produce revenue with Auto Club Speedway and placate fans who have been adamant that the sport needs another true short track.

Matt DiBenedetto could barely contain his excitement when talking about it during a zoom video teleconference on Thursday.

“Auto Club has been a cool place for a bigger track,” DiBenedetto said. “I prefer short tracks. It’s what I prefer to do. Short tracks are the best. That and road courses are awesome.

“The bigger racetracks, I don’t particularly prefer them. I wish we could run almost all short tracks. I’m in full support of it. The two-mile track had a lot of character and was one of the better big tracks by far, but still, the fact that it’s going to be turned into a high-banked short track is pretty cool. I can’t argue with that.” 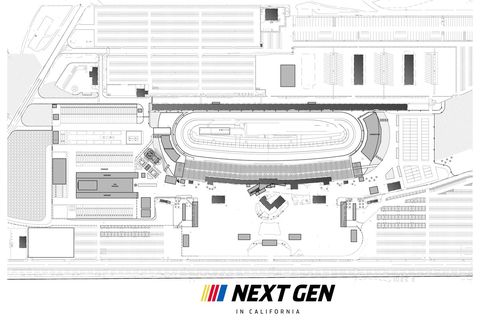 Brad Keselowski says 40 percent of the Cup Series schedule should be short tracks.

“I’d like to see short tracks represent 30 to 40 percent of the schedule,” Keselowski said. “I think mile and a half (tracks) have their place somewhere around the 25 percent mark. Road courses, maybe a little less, 10-15 percent.

“And then you have your superspeedways that round out the percentage pie. It’s fair to say short tracks should be 40 percent of the schedule.”

There has been some push-back, of course.

Auto Club Speedway was routinely one of the most exciting big tracks on the schedule over the past half-decade, especially as the racing surface aged and generated a tremendous amount of tire wear. But the track would soon need a repave — meaning that the brand of excitement from the past seven years would likely be lost for another decade.

But still, short track advocate Kyle Busch was disheartened to learn that a bullring would come at the expense of Auto Club.

“Fact of the matter is that I don’t like it,” Busch said. “I like California Speedway. I like it the way it is. I think it’s a really fun racetrack. I kind of understand the fan’s point, where it can get a little strung out (and) a little extended. Cars aren’t up on top of each other.

“There’s a good point to argue where there’s really been some fantastic finishes there over the years. Being an old, worn out surface, it gives itself an opportunity to put on a good show or put on a good race with us drivers.”

At the same time, Busch acknowledged that it’s hard to sell fans on good racing when the leader has a five or six second advantage.

“You can’t run away from the field at a short track by four to six seconds so there’s going to be everybody up on top of each other a little bit more and guys running into guys,” Busch said. “If the layout really is what they show and what we expect it to be, it’s going to be a track that’s going to be hard on equipment, hard on brakes and hard on tempers.”

Chase Elliott developed his skills in a Super Late Model across the Southeast and Midwest over the past decade. He recently attended a race at Five Flags Speedway in August — where he won two Snowball Derbies as a teenager.

In short, he’s a short track devotee who welcomed the news earlier this week.

“I thought Fontana was a good track — one of the better (big) tracks that we go to so you can kind of look at that and find a thing to complain about. But I feel like we all do enough complaining as is, so yeah I think it’s great.”

Further, Elliott was quick to praise NASCAR for simply trying something different.

In recent years, the sanctioning body has replaced an intermediate track race at Charlotte Motor Speedway with the venue’s infield road course to much fanfare. It also scheduled the Clash at Daytona for the Rolex 24 course in 2021 before needing to use it last month as a replacement for Watkins Glen.

NASCAR replaced one of the two races at Dover with a new venue at Nashville Superspeedway.

Elliott appreciates the creativity coming out of the Charlotte and Daytona offices these days.

“Ultimately, I think the bigger picture that we should all be really excited about is the leadership at NASCAR doing something really different,” Elliott said. “It’s becoming a trend. It’s really been a trend all year.

“I think instead of finding the negatives in some of the things that they’re doing, I think we should all be super excited that they’re actually changing and trying different things.

“They have some different ideas and they’re putting them to work. That’s something that I don’t think has happened probably ever until right now. So, I’m excited to see it. If something works out or it doesn’t, I think we should be excited that they’ve tried them and I think that will be a great addition to our schedule.”

Keselowski took the sentiment a step further and attributed it to CEO Jim France — who took over for his nephew upon his de facto resignation in August 2018.

The oldest son of NASCAR founder Bill France has spearheaded the development of the Next-Gen car and new initiatives like the schedule and track redevelopment. Keselowski said the downsizing of Auto Club Speedway is right out of the Jim France playbook.

“I thought there was room for improvement (in NASCAR) but I feel like I am in the middle of a book and I am just reading chapters and it is almost like there is a different writer now with these chapters,” Keselowski said. “Jim is writing them and they are pretty interesting and compelling.

“It is hard to view them as a whole because naturally no one knows everything that is going on behind the scenes but in the moment there is more that I agree with than I disagree with and that is probably a good thing.”