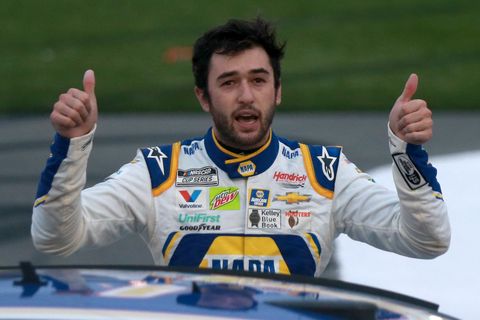 It wasn’t the race in the monsoon that many expected, but there was no shortage of chaos that only the Charlotte Motor Speedway Roval could provide, even if the results were entirely familiar.

The morning began with a deluge and a forecast that had drivers expecting to race on a drenched circuit for 109 laps and for over three hours.

Instead, the race began under wet conditions and on rain tires, with NASCAR leaving it entirely up to the teams to determine when they transitioned to dry slicks. Once the race began, it was slowed by nine cautions, a testament to the ever-changing conditions on one of the trickiest venues on the schedule.

And yet, again, the result was the same with Elliott winning his fourth consecutive road course win and second straight in the Bank of America Roval 400.

This is Chase Elliott’s sixth full-time season and he is still looking for his first Championship Race appearance.

He’s come close several times, including nearly winning at Martinsville in 2017, but has yet to brake through into the Championship 4.

With his win on Sunday at the Roval, Elliott matched his career high with three wins, three seasons in a row and now has three chances to punch his ticket into the finale on Nov. 8 at Phoenix Raceway. He begins the round fourth on the playoff grid and five points up.

“We’ve been fortunate to get to the Round of 8 the last couple years,” Elliott said. “That’s kind of been our stopping point. For us, we’re just eyes ahead trying to assert ourselves amongst that next group.

“We tend to see the same guys make the final four every year, the same group fighting for those spots. I think for us, we’re very capable of asserting ourselves amongst them. We just have to be a little better, a little more consistent, eliminate those bad racetracks, and I think we can run with whoever when we’re at our best. I’ve said that before. I really believe it. I’m looking forward to the opportunity and ready to move on.”

With that said, he finished fifth at Martinsville and 12th at both Texas and Kansas earlier this year.

“Kansas has historically been a decent track for us. We struggled there the first race this year. We know we got to be better. Looking forward to the challenge.”

With the race starting on wet tires and a still drenched track, the first stage was full of surprises and shock contenders.

The first stage also included a strategic element with NASCAR allowing teams to decide when to come down pit road and take slicks. Elliott led early, but Clint Bowyer looking to win his way into the Round of 8, overtook him on Lap 14.

But too many teams took slicks too soon, and the track wasn’t dry enough for it, and there were several instances of cars sliding off the track.

That opened the door for Ty Dillon to earn his first stage win of the season as he held on during adverse conditions while on those slicks. Dillon faded as the track completely dried but it made for an entertaining on-track product.

FOUR TO GO TO DECIDE A CHAMPION

The next three weeks at Kansas, Texas and Martinsville will determine who goes to the Championship Race at Phoenix.

As has been the case throughout the playoffs, Kevin Harvick and Denny Hamlin have built-up such a large advantage in playoff points that they could largely cruise to the championship race.

Brad Keselowski and Elliott enter the next three races immediately on the hot seat with Joey Logano, Martin Truex, Alex Bowman and Kurt Busch in pursuit.

A win from the bottom half of the grid, like Kurt Busch at Kansas, could immediately leave just one spot available for the next two races.

“We’ve had good speed,” Logano said. “I look at Vegas, if we didn’t get the damage, get trapped down a lap there for a minute, we were really good there, capable of winning.

“I look at Martinsville as one of our best races. Texas wasn’t bad for us either. I feel great about where we’re at. I told my wife before we left, I just got to get through today. I feel like we got a good shot at getting to the Championship 4.”

Bowman says “it’s probably going to take a win,” to advance into the Championship Race.

“We’ve had some okay days at Martinsville. We’ve greatly improved our short track program this year. We went to Richmond where we finished 26th last year or something like that, and we finished top 10, ran top 10 all day.

“Definitely not as nervous about Martinsville as I would have been a couple years ago. Yeah, I mean, I think that’s probably our weakest racetrack that we go to. The mile‑and‑a‑half’s, through the summer we really struggled, but at the beginning of the year and lately we’ve been really strong at.

Who do you have making the final four in the NASCAR Cup Series championship race? Tell us in the comment section below.