Jorge Lorenzo says that he feels “out of danger” after not crashing in the “survival weekend” at Silverstone on his return to MotoGP, and he will be able to risk more in future races.

Lorenzo’s latest injury was related to his back, sustained at Assen, and he returned to racing at the British Grand Prix after missing four races, but still without being fully fit.

He was consistently at the back end of the field throughout the weekend and he admitted that he preferred not crashing again over reaching the limits of his Honda.

Lorenzo eventually finished the race, which he said he would treat as a training exercise, in 14th, likening the weekend to the US GP at Laguna Seca in 2013, when he also raced injured.

While the Spaniard says he’ll have to be careful during this week’s Misano test on Thursday and Friday, he added will be fitter and able to take more risks in the race weekend at the same track two weeks afterwards.

“These three days have been kind of survival weekend for me, similar to when I race in Laguna Seca in 2013 with the recently operated collarbone for the second time,” Lorenzo said.

“Now I think I am a little bit out of danger, even if I have the test in Misano just in four days, there still will be some days of little danger for the injury but I think in Misano GP I will be quite okay. I will be fitter and with not so much fear to crash and the speed must improve.”

Lorenzo was happy with his pace in the race, which was his best of the whole weekend, but he admitted he had to slow down in the end due to back pain.

“Little by little I was getting the pace, the first two or three laps I struggle a little bit with the full tank to stop the bike,” he said. “When the full tank got more empty I start braking even harder than during all the weekend so the laptimes were better.

“I never rode with medium tyres in that pace during all weekend, so that is very nice to reduce the difference with the fastest one from four seconds to less than three, even 2.5s in some laps.

“I expected to finish probably last – I always was in front of [Karel] Abraham, in front of even [Hafizh] Syahrin, who was much faster than me during all the weekend.

“The rear tyre drop a lot in the last laps so that is why also Syahrin that was following me all the race, could overtake me and take the position.

“Also I start having a lot of pain on the back so I have to reduce a little bit the pace. My back is very sore, more sore than yesterday and Friday.

“I’ve been 20 laps in a row, going faster than in the weekend, I push quite a lot and to stay 45 minutes in this position [on the bike] doesn’t help the injury. Now it is very inflammed and I have a lot of pain.” 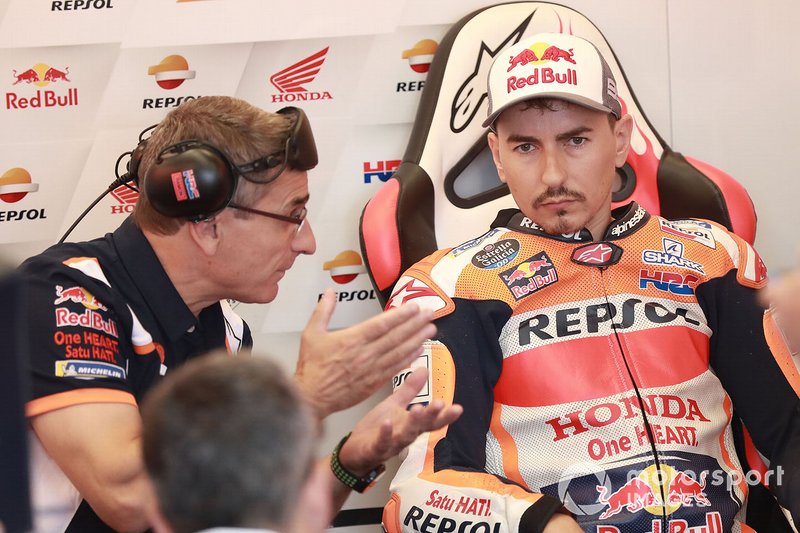