Max Verstappen’s fans got exactly what they wanted.

On Sunday Verstappen became the first Dutch Formula 1 driver to win on home soil, controlling proceedings at Zandvoort, the picturesque rollercoaster circuit adjacent to the North Sea. The win was the 17th of Verstappen’s blossoming Formula 1 career and no other driver in history has more victories without an F1 world championship.

Though Verstappen, and his legion of orange-clad and orange smoke bomb-weilding supporters, will hope he has that record for just a few more months. The win propelled Verstappen back into the lead of F1 Drivers’ Championship by three points over seven-time champion Lewis Hamilton, whose efforts to deny Verstappen a home win went in vain.

Verstappen was never seriously challenged by Hamilton and won by a final margin of victory of more than 20 seconds. Valtteri Bottas completed the podium, and these were the only three drivers to finish on the lead lap in was was the least competitive Grand Prix of the season.

Even the King of the Netherlands was at Zandvoort to watch its sporting hero hoist aloft the winner’s trophy while draped in the flag of his home country.

Zandvoort rocked to the sound of electronic dance music—popular in this part of the world—while the orange smoke from the flares lit by the spectators blew across the venue for much of the day. The event itself was a sporting paradise, particularly after Dutch spectators had to wait an additional 16 months for their race’s return, owing to the pandemic.

The Dutch GP was last held in 1985, and its planned 2020 event was canceled. Organizationally, Zandvoort was a great success, as it avoided issues that have plagued other debutant or long-absent events, facilitated by fans using public transport and bicycles. Only two per cent arrived by car. It was in effect a three-day national festival during which a 72-lap motor race happened.

“I know the fans of course have high expectations, when you come here they want you to win, but it is never that straightforward before you get here,” said Verstappen.

“But it is an incredible feeling to win in front of the fans, the king was watching as well with the family, an amazing day.”

Unfortunately, while the 65,000 fans got the result they desired, the race itself was a snoozer. It ran green throughout, save for a lazy spin for Sebastian Vettel, and only Hamilton and Mercedes teammate Valtteri Bottas avoided being lapped by victor Verstappen.

The top five on the grid all maintained their positions at the checkered flag with the first pass for position on merit being Fernando Alonso grabbing sixth from Carlos Sainz late on. The elements that made Zandvoort a spectacular one-lap Saturday challenge for drivers – fast, narrow, flowing, no room for error—made it a procession on Sunday. Even with DRS, drivers required a large pace advantage and tire differential in order to make an overtake. F1’s sponsor-paid tire graphics tried to inject some drama by suggesting Verstappen’s tires were on the ropes but it was a fallacy given their age and type of compound.

“In terms of the strategy we must say that probably 50% of the race was lost in qualifying and the start,” said Mercedes boss Toto Wolff on the importance of track position at Zandvoort.

“I definitely did not want to be too negative about it coming into the weekend, because you do not want to let everybody down, and it could surprise you, but in the end it was as expected,” said McLaren’s Daniel Ricciardo. “It is not a criticism but if I had a magic wand I would change the second-to-last corner. I would make that more open and faster, so that you can pick up a tow earlier.”

“Without a significant tire delta, it is almost impossible to overtake here,” added Aston Martin driver Lance Stroll, who was stuck in the midfield train. “Zandvoort is a great track to drive and it is definitely more of a Saturday circuit. I am happy to see it on the calendar, but perhaps there are ways to look into improving overtaking on a Sunday.”

Still, after Spa-Francorchamps’ rain-hit non-race race at least the paying punters got to see cars circulating at speed on Sunday afternoon, and it was another show of pace from Verstappen. After the controversial clash at Silverstone, and chaos of Budapest, it’s now post-summer back-to-back victories for Verstappen.

“I really thought during the summer break we need to speed things up otherwise they’re going to run away with it and I think we did, we did pick it up a bit,” said Verstappen. “I feel like we still need a bit more but it’s heading into the right direction.” 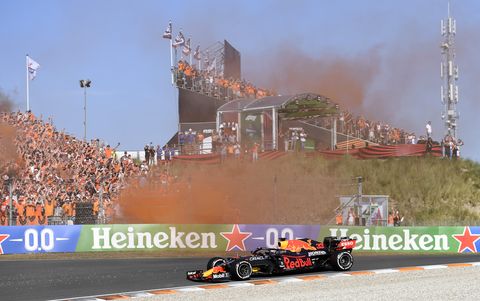 Hamilton was left in a position of having to accept second-best.

“They’ve definitely improved their car with some sort of upgrade in the last race that we didn’t obviously get to see the true pace of it,” said Hamilton.

Formula 1 will head next weekend to Monza – a low-downforce power-heavy circuit in a leafy park at which Verstappen has never won, with Red Bull’s last win there coming back in 2013. After that comes Russia, at the soulless Sochi Autodrom, at which Mercedes have never lost since the circuit’s debut in 2014.

“Looking ahead, Monza and Sochi are tracks that Mercedes have a stronghold, we’d expect them to have the upper hand,” said Red Bull Team Principal Christian Horner. “Therefore the next two races are about trying to limit the damage and making sure we extract as much as we can out of the cars.”