Mazda lost a shot at victory in the Rolex 24 at Daytona with a rear wing issue that robbed its solo entry of downforce in the closing stages.

Harry Tincknell, who was at the wheel of the Multimatic-run Mazda RT24-P for the run to the flag, believes that he could have won the race together with teammates Oliver Jarvis and Jonathan Bomarito but for the problem.

“The car went from being a rocket ship to something that wasn’t in a short space of time,” Tincknell told Motorsport.com after claiming third place in the opening round of the IMSA WeatherTech SportsCar Championship.

“Something broke on rear wing; we think it was a strut that changed the wing’s angle of attack – suddenly the car got very loose.”

The Mazda in Tincknell’s hands had passed the Chip Ganassi Racing Cadillac driven by Renger van der Zande for second position as the end of the penultimate hour approached before the problem struck.

The Cadillac DPi-V.R van der Zande shared with Kevin Magnussen and Scott Dixon was less than a second behind Filipe Albuquerque in the race-winning Wayne Taylor Racing Acura ARX-05 when it sustained a right-rear puncture with seven minutes to go.

“When I passed Renger, I thought, right let’s go on and win this thing, said Tincknell. “I’d passed Alexander Rossi in the [WTR] car that ended up winning as we got back on the lead lap, so I thought we had a good shot at it.

“Renger was able to really have a go at Filipe before the puncture and I’d passed him, so this really feels like one that got away. To lose second place right at the end only added to the disappointment — I admit I had a little cry on the slowing down lap.”

The Mazda mounted a comeback over the final hours of what Tincknell described as a “rollercoaster race” for the Multimatic squad. 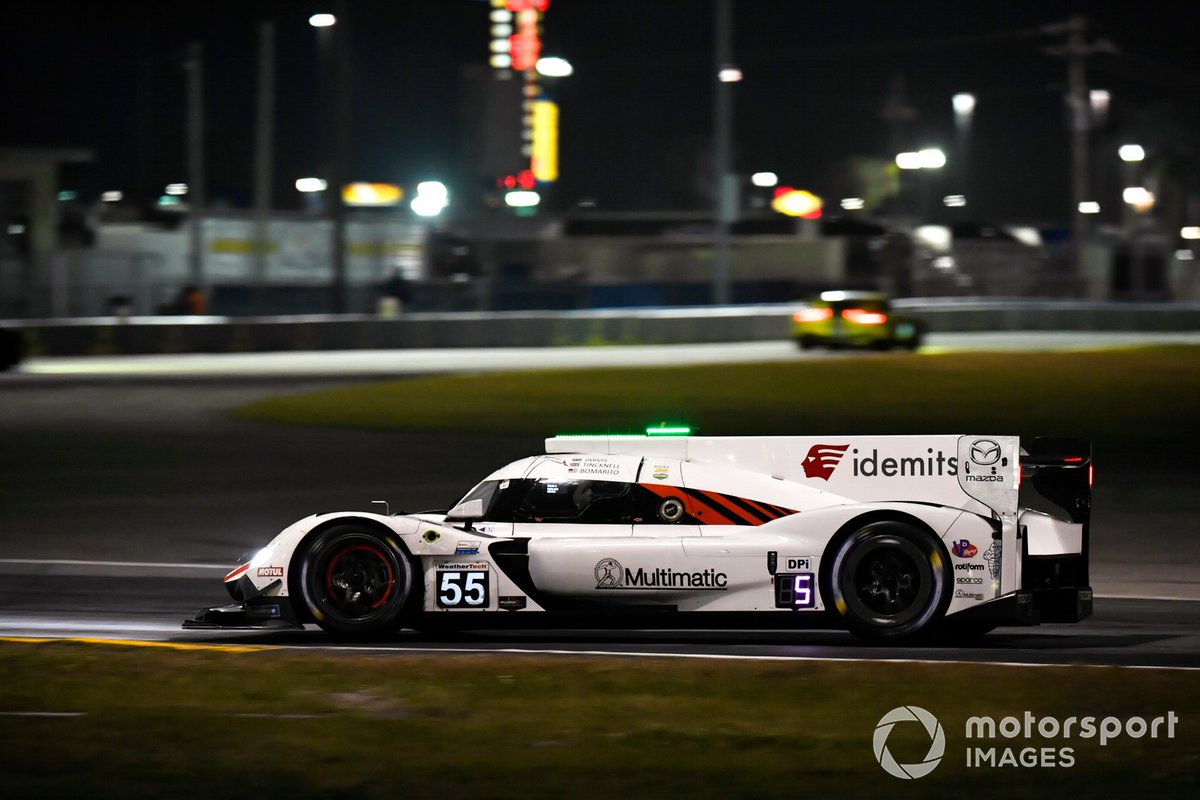 Jarvis, who was due to start from second on the grid, had to take the green flag from the back of the field after he struggled to select first gear as the cars went out to start the formation laps when the transmission went into stand-by mode.

The RT24-P struggled for pace initially and dropped off the lead lap in the fifth hour. It had just regained the lost lap when it needed a new tail section after the rear lights stopped working.  Three laps were lost because the pins on which the rear bodywork is mounted broke.

The Mazda came back onto the lead lap in the 19th hour when Tincknell first overtook race leader Rossi in the winning WTR Acura co-driven with Albuquerque, Ricky Taylor and Helio Castroneves and then got a wave-around during a subsequent safety-car period.

It moved into contention during the 11th of the 12 safety cars to interrupt last weekend’s race shortly before the 22-hour mark.