The old Nurburgring could never be called safe, but in the summer of 1976 the question of safety was high on the list of priorities in the Formula 1 world. Grand Prix racing had become a very dangerous game, with cars that were too powerful for the circuits on which they raced.

In the three years prior to the German Grand Prix that year, five drivers had been killed at the wheel of F1 cars: Roger Williamson, François Cevert, Peter Revson, Helmuth Koinigg and Mark Donohue. It was too much.

At some tracks, the drivers were frightened—if they would admit it. And, of course, it was worst of all at the Nurburgring. When the F1 circus arrived at the ‘Ring that summer they were worried. There was only so much that the organizers could do.

The guardrails were too close to the road, there was little run-off to slow down a car that was out of control. The track was so long that the number of marshals required was huge, the amount of equipment enormous and the cost of reconfiguring the track unthinkable. In an effort to provide a better fire service they organised high-speed intervention vehicles, converted Porsche 911s, but these still took time to get to the scene of any crash—and in those days fire was still a major hazard.

The late Niki Lauda, who was the World Champion on 1975, and was leading the 1976 World Championship, made it very clear. He didn’t want to race.

“My personal opinion is that the Nurburgring is just too dangerous to drive on nowadays,” he said . “On any of the modern circuits if something breaks on my car I have a 70/30 chance that I will be all right or I will be dead. Here, if you have any failure on the car, one hundred percent death. We’re not discussing if I make a mistake, but if I have failure on the car. If I make a mistake and kill myself, then tough shit.” 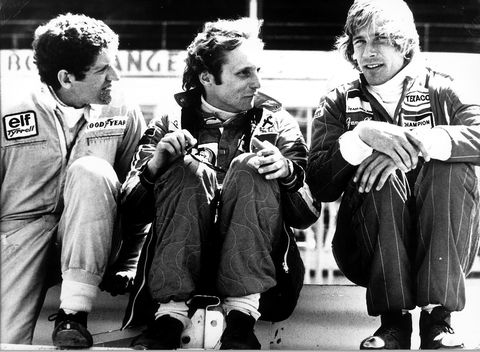 At the drivers’ meeting that weekend in 1976, he proposed that they boycott the race. They voted and the majority wanted to go ahead.

“Some of them wanted to seem brave,” Lauda said, “others were simply too stupid to know what they were doing. I steeled myself to drive, although my brain kept telling me it was sheer stupidity. The antithesis between the modern-day racing car and the Stone Age circuit was such that I knew every driver was taking his life in his hands to the most ludicrous degree.”

It rained before the Grand Prix, to add to the tension, and everyone apart from McLaren’s Jochen Mass opted to use wet weather tires. At the start, Lauda’s Ferrari teammate Clay Regazzoni took the lead ahead of the McLarens of championship challenger James Hunt and Mass. Regazzoni spun in the course of the first lap and dropped to fourth but by the end of the lap most of the drivers pitted to switch to slicks. This meant that Mass had a big lead. Conditions were treacherous, and different from corner to corner, a problem at the longer tracks.

Just after Adenau Bridge the circuit sweeps uphill, curling first to the left and then right around one of the many basalt outcrops formed by volcanic activity in the area millions of years ago. In pre-war days it was known as Junek Bend, named after Czech driver Vincenc Junek (husband of celebrated lady racer Elizabeth Junek) who was killed there in an accident in 1928.

The track then follows the hillside up the valley of a stream called the Exbach. The section was known as Ex-Muhle, the name coming from an old mill that had once stood on the stream. The plan had been for the start/finish line to be built there, but the mill-owner refused to release his land when the track was built. About 400 metres along this straight there is a fast kink to the left, following the hillside towards the curling right-hander beneath a cliff at Bergwerk. Lauda’s Ferrari went out of control in the kink and piled into an earth bank on the right side of the track.

“I was going down the straight at 280 kilometres an hour when something broke,” Lauda said. “I went straight into the wall and my car turned into a fireball and I was in there for 55 seconds at 800 degrees, until they got me out. I was right on the point of death for days and I think I really did die once.”

Lauda never remembered much about the crash itself. The flaming Ferrari bounced back onto the circuit in the path of the cars which were following. His helmet was torn off and he was trapped by his seat belts in the cockpit. Guy Edwards (Hesketh) managed to avoid the Ferrari but Harald Ertl (Hesketh) and Brett Lunger (Surtees) both hit the flaming wreck. All three drivers stopped and fought to get Lauda out. They were joined by Arturo Merzario who stopped his Wolf Williams.

In the end, it was the little Italian who managed to open the belts and Lauda was heaved from the chassis. He was badly burned and had inhaled fumes and toxic fire extinguisher powder. He was rushed to hospital in nearby Adenau and then air-lifted to the University Hospital in Mannheim. He was given the last rites but being the warrior that he was refused to die.

His return to the cockpit six weeks later at Monza is the stuff of legend and he went to the final race that year fighting Hunt for the title. But it was too wet and Lauda stopped the car. It wasn’t worth it. Hunt won the title, although Lauda would win the title again in 1977—and a third in 1984.

Officially, because that initial race was stopped after the accident, Niki Lauda never took part in the 1976 German Grand Prix. This always amused the pragmatic Lauda.

But back in 1976 the crash was no laughing matter—and it spelled the end of Formula 1 at the most dangerous race track of them all.

Of all the racing circuits in the world, where would you like to see Formula 1. Is the Nordschleife on your list? Start the discussion in the comments sections below!