History will have to wait.

Lewis Hamilton, hoping to match Michael Schumacher’s 91 career victories with a win from the pole at the F1 Russian Grand Prix on Sunday, saw his chances derailed in the stewards’ room when he was slapped with a 10-second penalty for making a practice start on his way from the pits to the starting grid.

Stewards deemed that Hamilton’s stop-start was conducted outside an approved area. He was given not one, but two penalties, for what appeared to be the same infraction.

After the race, Hamilton said little to defend his actions or contest the ruling.

“It is what it is,” Hamilton said. “It doesn’t matter. It’s done now. I’ll take the points that I got and move on.” 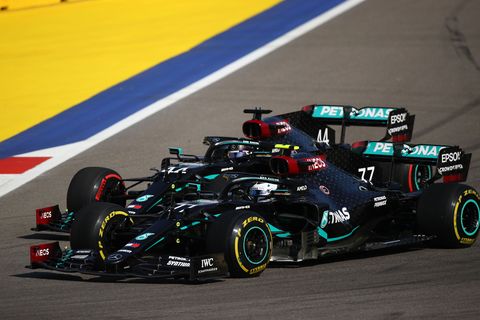 According to the stewards’ official report, Hamilton was deemed to have broken dreaded FIA International Sporting Cord Article 12.1.1 (i).

Two official reports, written exactly the same, were posted early in the race that resulted in not one, but two 5-second penalties:

Reason: The Stewards reviewed video evidence. The driver performed the practice start near the end, but directly in the pit exit. Art 36.1 requires drivers to use constant throttle and constant speed in the pit exit other than in the place designated for practice starts in the Event Notes item 19.1., which is defined as the place ”on the right hand side” after the pit exit lights (and is not part of the track as defined by lines) which has been known to all competitors and used without exception.

Competitors are reminded that they have the right to appeal certain decisions of the Stewards, in accordance with Article 15 of the FIA International Sporting Code and Article 10.1.1 of the FIA

Hamilton was leading the race from the start (OK, race-winner Valtteri Bottas did lead for a about a second in Turn 2 during a typically wild opening lap that included crashes that claimed the cars of both Lance Stroll and Carlos Sainz) before being informed of the penalty. Hamilton came into the pits on Lap 17 with a 2.7-second lead over Bottas and came out in 11th place, about 35 seconds back.

Hamilton served his 10-second penalty in the pits before his team was allowed to service his Mercedes.

Hamilton came out and quickly climbed to third place through pit cycles of the rest of the field but was never able to get closer than 10 seconds of runner-up Max Verstappen. Hamilton finished eight seconds ahead of fourth-place Sergio Perez as Hamilton spent most of the race with a large gap between both the car in front and car behind him.

“I didn’t really do much,” Hamilton said. “I just held my position.”

Hamilton left Sochi with a 44-point lead in the championship as he pursues yet another Schumacher record of seven F1 titles.

Hamilton’s next chance to match Schumacher’s career victory total will be Oct. 11 at the F1 German Grand Prix at the Nurburgring.