Formula 1 teams are counting the cost of the first half of the 2021 season, accentuated by the dramatic start to last weekend’s Hungarian Grand Prix.

At previous title leading team Red Bull there are fears over their Honda engines, bringing with it sporting and financial concerns, albeit with the caveat that engine-related costs are excluded from the cap.

Red Bull estimated $1.8 million worth of damage was sustained to Verstappen’s RB16B in his Silverstone crash, and while Honda was able to salvage engine components, he was moved onto his third and final permitted power unit in Hungary as a precaution. If a driver exceeds their allocation of engine components in a season then they face a 10-place grid penalty. 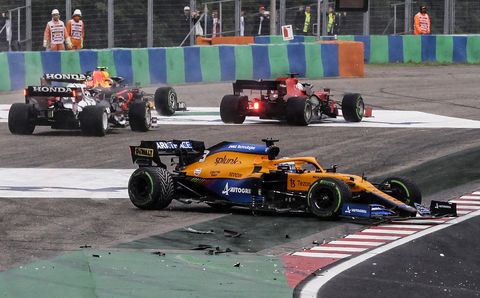 “It’s lost all its water immediately so we’ll have to look into more detail but the initial reports are it will no longer be in service,” said Horner of Perez’s power unit.

Horner added that Red Bull had “very little” chance of avoiding grid penalties, and labelled it “hugely frustrating for Honda, as it’s not due to reliability, it’s because of accidents that we haven’t caused.”

Ferrari, too, is likely to face a penalty, after Charles Leclerc’s power unit sustained irreparable damage when he was thumped at the start by Aston Martin’s Lance Stroll. The engine will not be able to be used again, despite the fact that it was firmly within its life cycle.

Ferrari released a terse statement in which it labelled it a “financial impact” and one with “racing ramifications” due to the expectation of copping a 10-place grid penalty between now and Abu Dhabi.

Mercedes previously outlined that Valtteri Bottas’ high-speed crash at Imola in April would influence its development program for 2021.

“Our car is a write-off and in a cost-cap environment that is certainly not what we needed and it’s probably going to limit the upgrades that we are able to do,” said an angry Toto Wolff after that race.

Formula 1 is in the first year of a budget cap, set at $145 million, albeit with a list of exemptions. These include engine costs, marketing and driver salaries. For each extra event above 21 Grands Prix the cap is raised by $1.2 million.

Some of the bigger teams, most notably Red Bull Racing and Mercedes, had to shift staff onto other projects to meet the budget cap, while some were let go, an experience Horner previously described as “painful.” Ferrari, which has to adhere to tighter Italian workforce laws, repurposed staff to its Le Mans project, and the base Haas has at Maranello.

The accident damage costs must come out of a team’s budgets. If they haven’t budgeted for damage, then money spent on upgrades or development may have to be shifted elsewhere. When Verstappen lost a tiny aerodynamic component after striking a curb heavily during practice in France Red Bull’s sporting director requested that the part be returned to the team post-session, wary of their allocation and potential financial impact.

The damage sustained in Hungary promoted a couple of teams to suggest that the regulations concerning the budget cap need re-writing, with one team even making a proposal that a guilty party should pay for costs incurred by an opponent.

“I think we need to revisit this with the FIA as it’s something that can affect all teams, not just Red Bull,” said Horner.

“I think it’s a good point, and I think there is value for discussions in the near future with the other teams principles, FIA and F1,” said Ferrari team principal Mattia Binotto.

“If we look at the crash of Max and Lewis (at Silverstone), and obviously if you’re not guilty, having such damages in the budget cap is something which is even more of a consequence now. Should we add exemptions? I’m not sure that is the solution. I think it may be very difficult to police. But I think that what we may consider, that if a driver is guilty, then the team of that driver should pay at least to the other teams for the damages and repairs, that will make the driver more responsible.”

“It’s down to us to manage the budget in the right way.”

But the comments by Red Bull and Ferrari got short shrift from their contemporary at McLaren, team principal Andreas Seidl.

“I definitely will not go in the direction that Christian is going, mentioning every second sentence the cost cap and how much it will be hurt by it by an accident on track,” he said.

“In the end, it’s part of the game we’re in. It’s down to us to manage the budget in the right way. It is quite simple and straightforward. At the beginning of the season, based on the experience of previous years, you simply have to account for certain crash damage per year. That’s what you have to figure in and that’s what we have in the budget and that’s the challenge that we are in. It’s the same for everyone.”