The accident on the first lap of the Formula 1 Bahrain Grand Prix on Sunday that saw Romain Grosjean’s Haas car crash into a steel barrier and turn into a fireball is a reminder of the ever-present dangers in F1.

Lewis Hamilton won his 95th career race, and Red Bull teammates Max Verstappen and Alex Albon completed the podium. This race, however, will always be known for Grosjean’s great escape.

The last time we saw such an accident in Formula 1 was at Imola in 1989 when Gerhard Berger’s Ferrari crashed at the old Tamburello corner. That is 31 years ago.

The fact that half of Grosjean’s car went through a three-tier steel barrier was equally shocking and reminiscent of the worst days of the sport in the 1970s, but much has changed since then. Grosjean emerged without any major injuries, although he suffered second degree burns to the back of both of his hands.

There will be an in-depth investigation into the crash, as there are with every major accident in Formula 1.

“We will do a complete investigation from an FIA perspective, from start to finish,” said Michael Masi, the F1 race director. “We will look at car safety, track safety, driver equipment. The whole thing. What we saw today is a testament to the ongoing pursuit of safety in all areas. The process will continue.

“You learn each and very time. From the bits and pieces I have seen, everything did what it looked like it was supposed to do but I haven’t looked in any great detail at this point and there will be weeks of ongoing investigation by the FIA Safety Department. I think from a casual viewers perspective, it is a testament to the immense safety features we have. It was a great display of everyone working together very quickly, knowing what their roles are and getting in and doing it. A credit to everyone involved.”

The forces involved in the crash were huge with the impact registering 56 g. The survival cell of the car went into the barrier and turned, which meant the rear of the car, from behind the fuel cell was ripped off. Some fuel was sprayed out with the impact and probably ignited because of the contact with the batteries in the energy recovery system.

Although it was dramatic to see, the fire was not as large as one might expect with a full tank of fuel and there is no doubt that this will figure in the investigation. 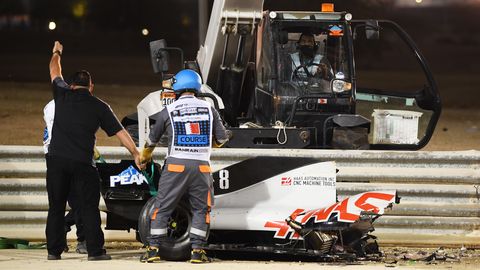 Grosjean was in the fire for an estimated 28 seconds and extracted himself, minus one racing boot, which was somehow left behind. The FIA Medical Car was on the scene within seconds of the impact and the FIA medical delegate Dr. Ian Roberts went straight to the fire, pausing to help a fire marshal activate an extinguisher and then going into the fire to help Grosjean who was then getting over the barrier.

“It looked like an oven,” Roberts said. “It was red with flame and you could see him trying to get himself out and he was gradually getting further out, but it was a question of how do we get to him. There was a fire marshal pretty rapidly on scene and the extinguisher powder pushed the flames back enough. Once Romain was high enough we could get him over the barriers and away, but it was a very small window. As soon as the extinguisher powder moved the flames were coming back pretty soon. The flame was pretty intense.

“You have to assess the risks. It would have been daft to go in there with the flames coming towards me, so that extinguisher helped for sure. Romain said that he was in pain from his foot and his hands because he has some burns on his hands but it was really a question of getting him sat down to check that life-threatening things were covered and then getting him to the ambulance and off to the Medical Centre.

“I have to say it was not just the two of us (Roberts and Medical Car driver Alan Van der Merwe). We had a national doctor with is in the car, a whole medical team, the fire marshals and the rescue people and they all did their bit. Fire is not so common but at the beginning of very day we run though a check list for our car and we also run through a check list of scenarios so we always talk about cars under barriers, cars on their roof. With fire we go for the extinguisher and we go in and do what we can as the fire is being extinguished. If the flames are coming at me there’s nothing I can do. As much as it is upsetting you can only do so much. We do what we can.”

Van der Merw said that the accident should be seen as a positive thing because of all the safety systems that worked.

“The outcome is positive,” Van der Merw said. “In terms of incidents that we have seen together this was very much at the top of the list in terms of magnitude and being impressive, but it is incredibly positive.”

An investigation will follow, but from what was immediately visible from the wreckage it was clear that the driver protection on the car played a key role in saving Grosjean’s life. The halo protecting the driver appears to have cut through the steel of the barrier, but in doing so it protected Grosjean. Meanwhile, the rollbar appears to have pushed back another section of steel so that it did not hit the Frenchman. The impact was huge and there were signs that the chassis just in front of the cockpit was broken in the impact, but again it the job of protecting the driver.

“We need to analyze it very carefully,” said FIA president Jean Todt. “What is most important is that Romain Grosjean escaped from such an accident. It means that a lot of things that have been implemented over the last decades have given some result. Sometimes you make decisions that are against the will of the fans and the drivers, but you make them because you believe you should do it.”

There is no question that the halo played a significant role in the crash.

“Barriers splitting was a classic problem many years ago,” F1 sporting director Ross Brawn told Sky TV, “and normally it resulted in a fatality and there’s absolutely no doubt the halo was the factor that saved the day and saved Romain. But all the team behind it just need crediting for forcing it through.

“If you recall, there was quite a lot of controversy at the time about introducing it and I don’t think anyone now, especially after today, can doubt the validity of that and the value of it. So, hats off to everyone involved because it was a life saver today.”