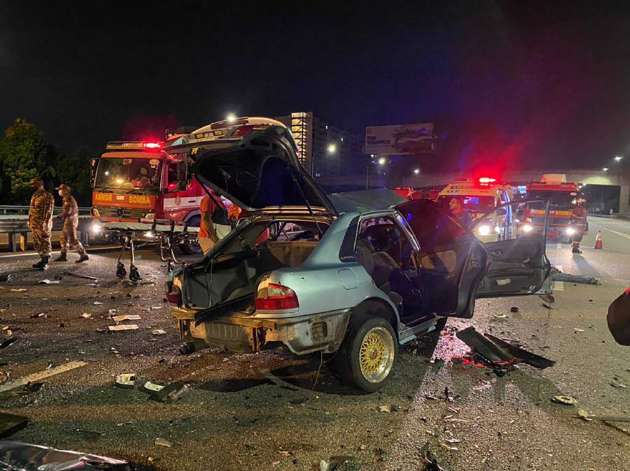 There has been yet another senseless loss of lives caused by a car driving against traffic earlier this morning at 4am. A total of four people were killed at 4am on NKVE near the Subang exit when a Proton Wira Aeroback traveling in the wrong direction hit a Proton Wira sedan.

The family of P. Puvaaneshwaran is still coming to terms with the circumstances…

We have posted countless of such incidents captured by dashcams. It seems like it is happening way more often than we think. We already wrote back in 2017 that we have been noticing a spike in these crazy antics, and it looks like it’s back after a short pandemic break. While no one got hurt in a lot of previously published dashcam footage, sometimes luck runs out of us and it results in death.

This is a reminder that drivers have to always be alert when behind the wheel and be able to swiftly move out of the way when encountering these lawan arus drivers. That could have been tough to do at 4am in the morning. We are absolutely nonplussed as to the circumstances of such behaviour – why would anyone think they could get away with going the wrong direction on a highway?

Sometimes it could be due to medical conditions – one case of lawan arus on NPE in 2018 was due to the driver involved suffering from dementia and hearing difficulties. That lead to calls for licensed drivers over the age of 65 to be required to undergo medical tests every six months to ensure their fitness for operating a motor vehicle. However in this particular case, the driver was young.