Top Gear is a British car show, which is an uncomfortable position to be in during a year where the majority of the United Kingdom hasn’t driven anywhere. The nation’s auto industry is on its knees, ravaged by the dual problems of COVID and Brexit, and the most famous driving stunt anyone’s done recently was a government advisor’s lockdown-busting trip to “test his eyes.” Driving in the U.K., not the stuff of legendary open roads in the first place, has never been less cool.

That’s a problem if your job as the BBC’s public broadcasting car show is to try and make it seem fun. Pulling off the sort of impossible road trip stunts that inspire automotive gap year dreams is all very well when that inspiration isn’t immediately plunged into depression by the reality of not being allowed to go further than your parking space. How do you convince people they care what someone else is driving, let alone feel anything about it? 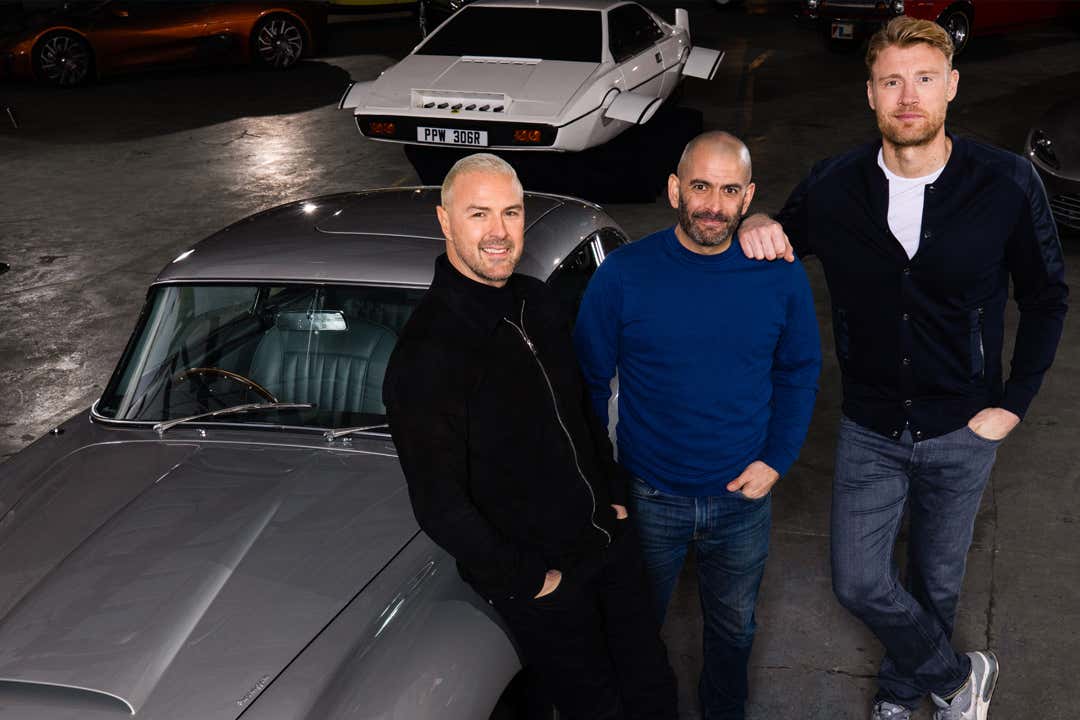 Top Gear started filming again last year while coronavirus restrictions were slightly—but not fully—lifted. And it comes out as we’re set to exit them, again. Season 30 launches on April 25 in the United States (on BBC America and AMC+) and comes from a much more muted place than the macho, messy bombast of some previous seasons.

Ace driver Chris Harris, cricket star Freddie Flintoff and comedian Paddy McGuinness are still the presenters, back for their fourth season and with the reassuring patter of their banter now well-practiced. But these are weird times; rather than take them for a fish-out-of-water experience somewhere far-flung, the three had to work together on the more intimate topic of driving at home.

Speaking to journalists at BBC studios, where they were doing final recordings, the presenter trio talked about what Top Gear means in a world where there aren’t—to be blunt—grand tours. Flintoff said in some ways the show was more straightforward to get back to than other big BBC productions because of the solitary nature of driving.

“It’s been a little bit easier for us as opposed to people making a [drama] TV show because a lot of stuff we do in the car on our own with a little GoPro camera,” he said. “We just had to stay in a bubble together as well. So, you know, that part we’re not troubled about this much, except for filming in the U.K.”

“But you also feel fortunate that you can get out and work,” Flintoff continued. “Everybody else is at home and we’ve got a chance to spend time with each other, drive cars, have some fun—that you have a newfound appreciation of what you’re doing. You know, we feel so lucky.”

Watching a bunch of what we would call “jammy gits” in the U.K. (or “lucky bastards,” for you Americans) speed around in dream cars isn’t especially likely to tug at anyone’s emotions so much as pull their pigtails and wind them up, though. So how do you get that emotional response?

In a preview episode shared with The Drive, producers seem to hit on the answer. Flintoff, McGuinness and Harris present copies of their dad’s cars to discuss what it feels like to be driving something they were never allowed to as children.

Harris’ mother was the driver of the family (she raced Minis) but all three have exactly the emotive reaction you’d imagine to moving from the back seat to your dad’s, the driver now—whether it’s McGuinness’ families’ lurid yellow Spanish-made Ford Fiesta or the Harris’ more upmarket BMW 3 Series. During a year where many people have been separated from their families or lost parents and loved ones they’ll never see in that seat again, it hits harder than the simple concept might have as a throwaway to a more outlandish season.

McGuinness mentioned, “It was lovely. We do a lot of mad stuff on Top Gear and we’re always having fun, so it was nice to kind of rein that little bit back in a bit and be honest with each other and talk about stuff and show a little bit of emotion. It’ll be interesting to see how the viewers respond to something like that. It was the kind of honest, you know, what you see is what you got.”

Some of those cars might be unfamiliar to U.S. viewers but the emotions are easily grasped. Flintoff, in particular, reacted strongly to the burgundy Ford Cortina exactly like the one his parents slept in, in the ’80s, to take him to cricket matches as a young player.

“It was amazing getting into the cars and looking around at the dashboard and all the dials and all of a sudden everything starts pulling back from your childhood,” he said. “I used to play cricket and my dad used to drive me up and down the country and everything started flooding back. And then you flip it on its head; I’m driving. I’m a dad now. I’m questioning myself as a dad and trying to my doing the right thing. So it was emotional.”

Fans of the more typical Top Gear mucking about need not be disappointed, however, as Flintoff reassures. “And then obviously we lower the tone by sticking my ass in his face on his knee,” describing a segment where the team desecrates their dad’s cars by attempting to drive while sitting on each other’s laps.

Harris is maybe the most philosophical about it. “[Top Gear] is actually a very simple product. It’s about how human beings interact with motor cars and why this weird mechanical object somehow elicits such emotional responses from us. “

“Why have opinions about people’s arguments and on that level, the memories that we have in them,” Harris added. “So it was a very clever treatment for the producers, not one that I was automatically comfortable with—but when I was presented with this thing that makes you remember such pungent memories, you can’t really avoid it.”

There’s a point in the episode that, specific memories of ’80s BMWs or Fords aside, will make something twang in your chest. Two of them hug. They have a little adventure—completing a typical Top Gear challenge where you’re trying to set the best lap time on someone else’s lap and it’s a typically slapstick palaver, a whimsical bit of non-serious testing not of what cars can do but what you can do with them and it’s funny and a little bit fraught. And then they hug. Safely, of course, because everyone was COVID-tested and bubbled during the shoot.

But in an emotive sequence, it’s the joy of doing daft stuff with your mates in cars and being together that suddenly hits like a speed bump on decades-old suspension. It’s the kind of thing a lot of us probably miss these days, from our regular person, normal driving. It’s not the sort of outrageous stunt moment you’re meant to have as the conversation-starter from a Top Gear episode but hits it perfectly right, by accident, in 2021.

“We’ve got less scope to go out and do that sort of hyperbolic stuff and Top Gear always has to be a little bit of a cartoon,” says Harris. “I think [if] it’s not a cartoon, it just becomes a very cold, antiseptic review show and everyone’s realized that’s not what mainstream television wants because we’d get about half a million viewers and we’ll be off the air fairly quickly. And I think the dad’s car film was a good demonstration of the fact that we’re exploring people’s relationship with motor cars as opposed to just going out and going nuts.”

Not that they’ve quit the supercars or the staggering excess. But maybe that’s a different thing now, where just being allowed outside to drive counts. “Yes, there is a crazy Lamborghini that’s got too much power that is unaffordable. It’s a very difficult balance, really. Top Gear should be a good balance of silliness and relatable content. And in the last year, the motor car has not continued its role in our lives that it once had,” Harris said.

“We’ve had to move with that, although being out about when anyone else wasn’t driving was was tricky because at times I think we felt guilty that we had that freedom. But what are we supposed to do, just go ‘well, we’re just going to go home and do nothing, either?’ Hopefully, we’re providing a product that people can sit and watch and enjoy, quite a bit of a soup of emotions.”