The ultimate collection of Top Gear is now available on the MotorTrend App, the only subscription streaming service dedicated entirely to the motoring world. Sign up for a free trial to start binge watching right now!

Top Gear UK is now on the MotorTrend App with 170 episodes of your favorite British automotive trio doing what they do best! Many of the enthusiasts at HOT ROD are eagerly anticipating the release and reliving some of their top Top Gear memories. Jordon Scott, HOT ROD’s production editor, has been a fan since the early seasons and brings you his Top 3 Top Gear moments.

The Vietnam Special: Series 12, Episode 8
The whole episode is a favorite for a couple reasons. 1) It was one of the first big challenges the producers had assigned to the hosts: ride cheap, worn-out motorcycles over a 1,000 miles in eight days through a country with poor infrastructure and one traffic law—might is right. To cap it off, it was Vietnam’s monsoon season and the oldest of the trio, Jeremy Clarkson, hates motorcycles and doesn’t know how to ride one. The challenges, shenanigans, and insanely beautiful cinematography set a very high bar for future Christmas Specials to come. Oh, and at the very end they have to turn their bikes into boats to reach the final stop, a floating bar hidden in the middle of Ha Long Bay. Amazing!

2) Jeremy’s personal journey—from not using the kickstand on his little Vespa or even knowing how to start it on day 1, to racing Hammond through one of the most beautiful coastline mountain roads the world has to offer with a smile plastered across his face—sums up everything I love about riding motorcycles. By the end, Jeremy talks about the revelation he’s had and his new understanding of motorcycles and why people love them so much, then promptly admits he still hates them and thinks all motorcyclists are idiots. Classic Clarkson.

OLIV3R!!! The Botswana Special: Series 10, Episode 4
While the Botswana Special as a whole is a fantastic episode, the relationship that develops between Richard Hammond and his 1963 Opel Kadett is one for the ages and reminds me of the relationship I had with my first car. The plucky Kadett goes everywhere and does everything Jeremy and James’ cars (a 1983 Lancia Beta Coupe and a 1985 Merc 230E) can do, and in most cases, better considering it required no modification throughout the entire journey while Clarkson and May’s rides were nearly unrecognizable by the end.

Drama unfolds while trying to cross the Okavango Delta; the Opel, affectionately named “Oliver,” sinks while trying to ford a deep water crossing, the dreaded “back-up vehicle” (a Volkswagen Beetle, their extreme hatred of which is one of the very few things all three hosts can agree on) is looming in the wings and, in true Top Gear fashion, Hammond is ditched by the other two while he toils through the night to resurrect his faithful companion using only the allowed handtools and no replacement parts. Hammond triumphantly crosses the finish line in a happily running Oliver and even had the car shipped back to Great Britain after filming, where he restored it and still owns it to this day. The other two periodically “take the mickey” out of Hammond over Oliver, especially the custom plate, all the way to the end of their time on the series together. But anyone who has ever had that kind of bond with a vehicle knows all the mocking is worth every moment you spend behind the wheel.

Jeremy Clarkson and the 928, The Patagonia Special: Series 22, Episodes 1–2
In the closing era of the original three hosts, all of the Top Gear specials were off-the-walls bonkers. The Patagonia Special was no different; the British auto-trio finds themselves navigating a myriad of situations: terrain that would give specially built 4x4s a challenge (let alone their V8-powered sports cars), their own misadventures and tom-foolery, and the violent protest caused by internet sensationalists who misinterpreted the license plate on Jeremy’s Porsche 928 GT and raised a mob that forced the cast and crew to flee Argentina as fast as they could.

It’s not the political climate between the Argentine and the British that is the focus here, though. It’s what Jeremy says about the Porsche 928 he’s driving: “…for one very good reason, [the Porsche 928] isn’t dull to me*. See, back in 1994, I was living in London and I got a call one evening from my mum to say that my dad was desperately ill in a hospital in Sheffield and I needed to get there as quickly as possible. I had just taken a chicken out of the oven and I thought, ‘Well I’ll take that for my mum ’cause she won’t have eaten,’ and I ran outside and I had a 928 on test that week. And when I arrived in Sheffield**, the chicken was still warm. And my dad was still alive. In fact, he died half an hour later. And the truth is, if I hadn’t had been driving a car which could sit, quite happily, at 170 miles an hour, I wouldn’t have had the opportunity to say goodbye to my dad.” Genuinely touching.

Editor’s Notes
*Richard and James are teasing Jeremy on his choosing the 928 for the challenge. They believe it’s a dull businessman’s car with no soul. They are driving a Ford Mustang Mach 1 and Lotus Esprit Twin-Turbo V8, respectively.
**London to Sheffield: 167.3 miles. 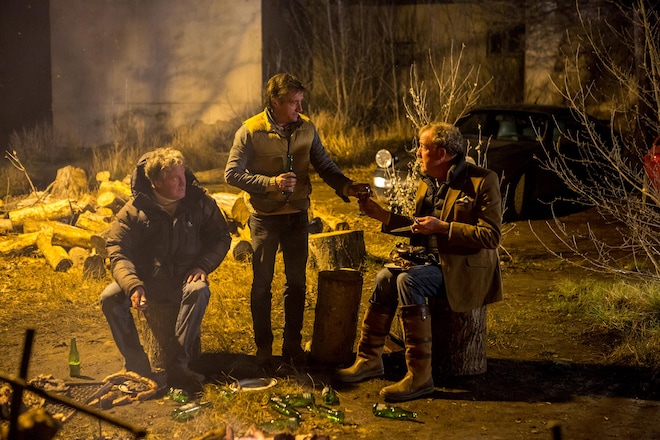