The Volkswagen GTI is the hot hatchback, and it’s still going strong as it heads into its eighth generation. The main sticking point enthusiasts have with the GTI is its drive layout, with all the power going to the front wheels. The R32 models—and later, the Golf R—addressed this partially with a Haldex AWD system, and this meant adding all the parts necessary to drive the rear wheels of a Golf.

As Motor1 pointed out initially, this gave the VW enthusiasts at Deutsche Auto Parts some ideas. The way they saw it, all of the parts to make a Golf strictly rear-wheel-drive were all there—they just hadn’t been configured correctly. So, with the help of a donor R32 and parts from a few other Volkswagens, they set about making that dream into a reality and documented the process in a series of videos. 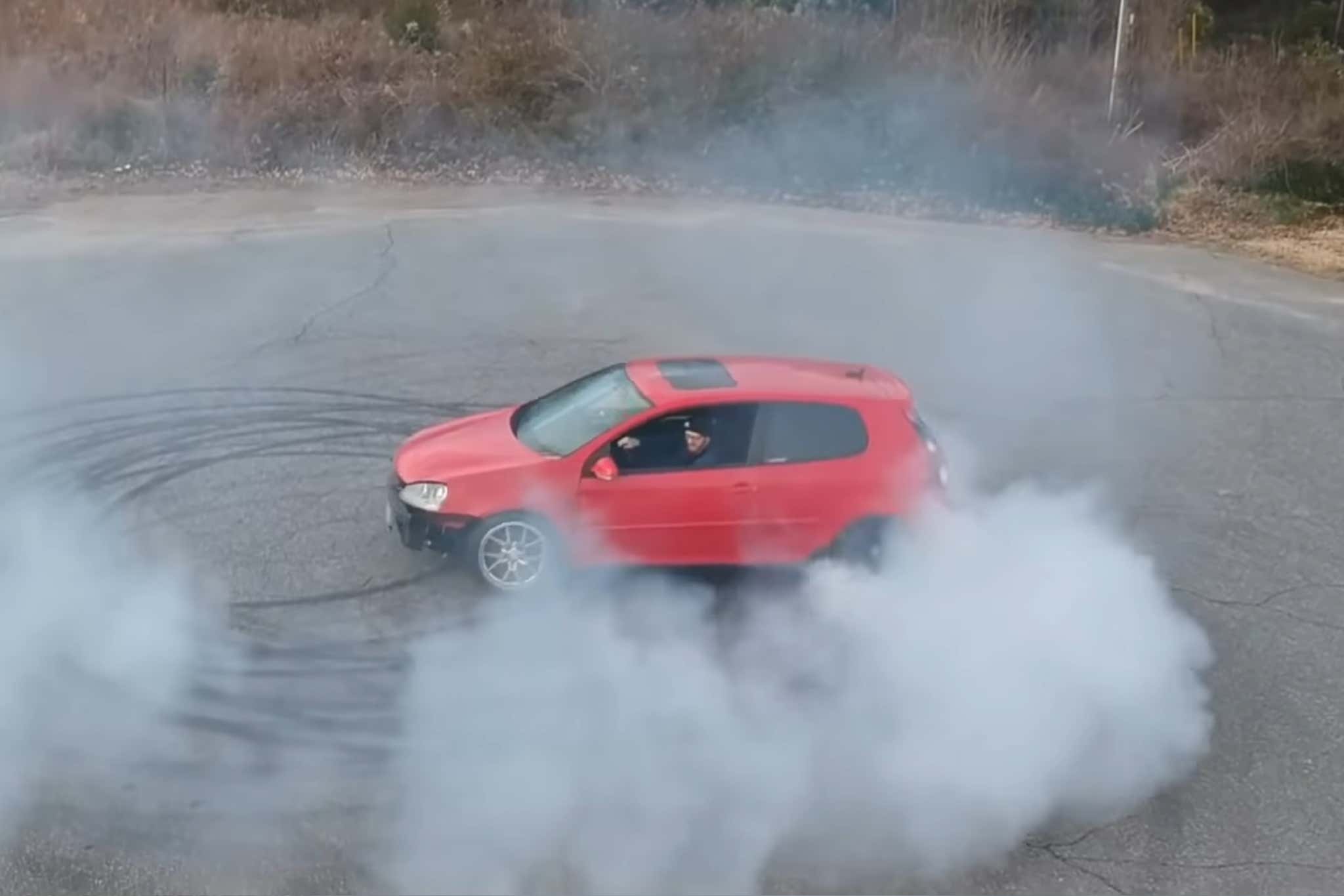 The main parts they’d have to swap into a regular GTI were, of course, the R32’s rear differential, the transfer case-equipped transaxle, and the two-piece driveshaft that brings power to the rear wheels. The rear subframe from the R32 also had to be swapped in, because it’s different as well. Basically, the team swapped the entire rear end from an R32 into a GTI.

Initially, they planned to use an aluminum subframe from a Passat to save weight—albeit just five pounds—but it later proved that the Passat subframe had a few bits that would’ve gotten in the way, so it was discarded in favor of the normal steel one. Likewise, a Passat differential was intended to be used instead of the R32’s, just in case it blew up. The team went as far as welding the spider gears together to do away with the one-tire-fires before realizing that the case had different mounting points on the subframe, so they had to give up on that Passat-sourced solution altogether.

The wrecked donor R32 also gave up some other parts that were necessary to make the rear differential fit, like a new gas tank that left some space for the driveshaft to pass through, and the mounting points for the driveshaft’s center support bearing. The spare tire well also had to be cut away to make room for all of the new parts, as well as some other sheet metal that found itself in the wrong place at the wrong time. Throughout this process, the team also installed a few suspension upgrades—stuff like new bushings and adjustable control arms.

The GTI they swapped these parts into also has an upgraded 2.0-liter turbo engine. It has a series of high-performance parts that bring it into the neighborhood of 500 wheel-horsepower, and as anybody with a high-output front-wheel-drive car will tell you, having all of that power go to the front wheel can sometimes be a little frustrating. Shifting into reverse to do donuts isn’t the best look.

But in any case, the team eventually got all of the parts hooked into the right places, with the front drive axles removed completely to make the Golf strictly RWD. Also installed was an aftermarket controller for the Haldex system that allowed the clutch on the rear differential to be permanently engaged. Typically on stock Haldex-type AWD cars, the rear wheels will only engage and start spinning when front-wheel slip is detected. With all of the hardware necessary to power the front wheels completely missing, you can see why this new controller was necessary. Interestingly, it’s controlled by an app, similar to the XDelete system available on some BMWs.

Hardware and software changes completed, the guys at DAP dragged the car outside, spun it around for a donut, and blew up the bevel gear in the transfer case. As it turns out, 100 percent of the car’s power—500 horsepower, in this case—is not meant to be transmitted through the spiral bevel gear that sends drive to an R32’s rear wheels. Also, the rest of this drivetrain is definitely not up to the task of handling so much power. The R32’s rear differential looks like a little toy, something along the lines of My First Differential! It’s undoubtedly too small to hold up to the amount of power being put down by this tuned-up GTI’s motor.

That wasn’t the end of the project, though. The guys anticipated this trouble and had a spare transmission lying around, which they installed after the first outing ended in failure. This time, the bevel gear and Fisher-Price differential held strong with no mechanical breakages.

That last video was posted a week ago, with no updates since then. Judging by the amount of work that was put into making this car drive right—outside of just driving the correct axle—we probably haven’t seen the end of this project. Hopefully, it will be doing more than just donuts in the next installment.