There’s plenty we take for granted every day, but no one’s as underappreciated as those who service the restrooms along the Rubicon Trail. Indeed the famous off-road course is lined with outhouses for wheelers’ convenience and, until recently, it was a two-day job to pump them all. Now, it can be knocked out in one shift thanks to El Dorado County’s lifted and kitted 2006 Ford F-550 pumper truck on 41-inch Michelin tires.

Now, before this rig was built to the high-heavens by WFO Concepts in Auburn, California, it was donated free and clear to El Dorado County. It was originally a dually bucket truck with four-wheel drive and since it had a Dana Super 60 front axle from the factory, it was a stellar base for the project. It packed four-inch axle tubes and 4.10 gears from Ford, though WFO promptly swapped out the latter for 5.38s. 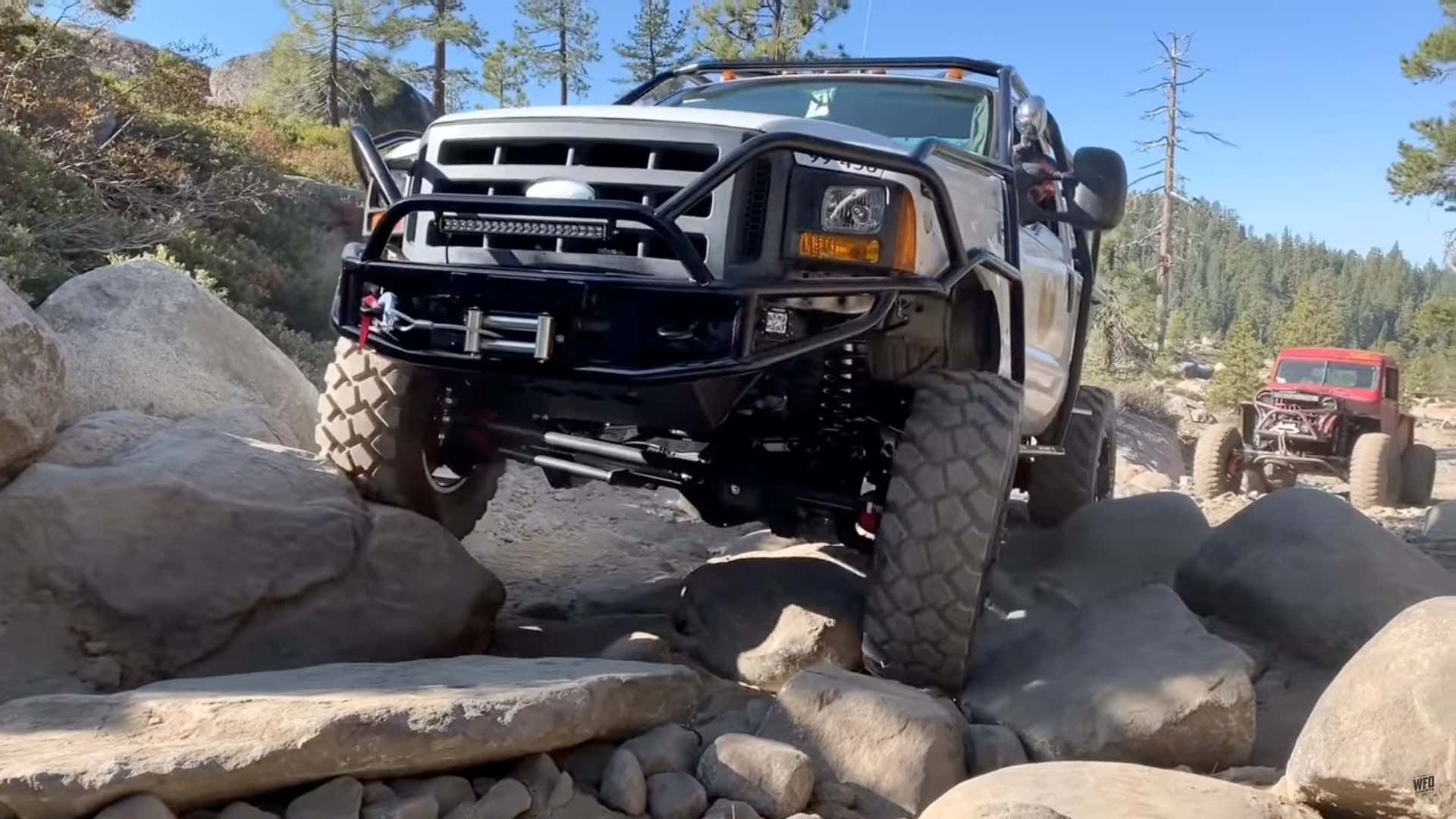 It’s powered by a modular 6.8-liter V10 with an automatic transmission, and WFO placed a Northwest Fab crawl box in front of the stock transfer case. The goal all along was to build a low-geared, slow-crawling truck that could maneuver its way through the Rubicon’s giant rocks while still getting the job done. Along with the extra ground clearance provided by the four-inch Radflo lift, it’s got full belly skid plates, rock sliders, custom front and rear bumpers, and a genuine exocage. It fits right in with the other rigs, except the black water it’s carrying is anything but exquisitely roasted artisanal coffee.

Those 5.38 gears help turn the 41-inch Michelin run-flats which are mounted to 20-inch Stazworks super single wheels. A set of 40-spline RCV axle shafts and a 40-spline ARB front locker further aid the effort, and PSC hydro-assist steering makes navigating from one stop to the next even easier. 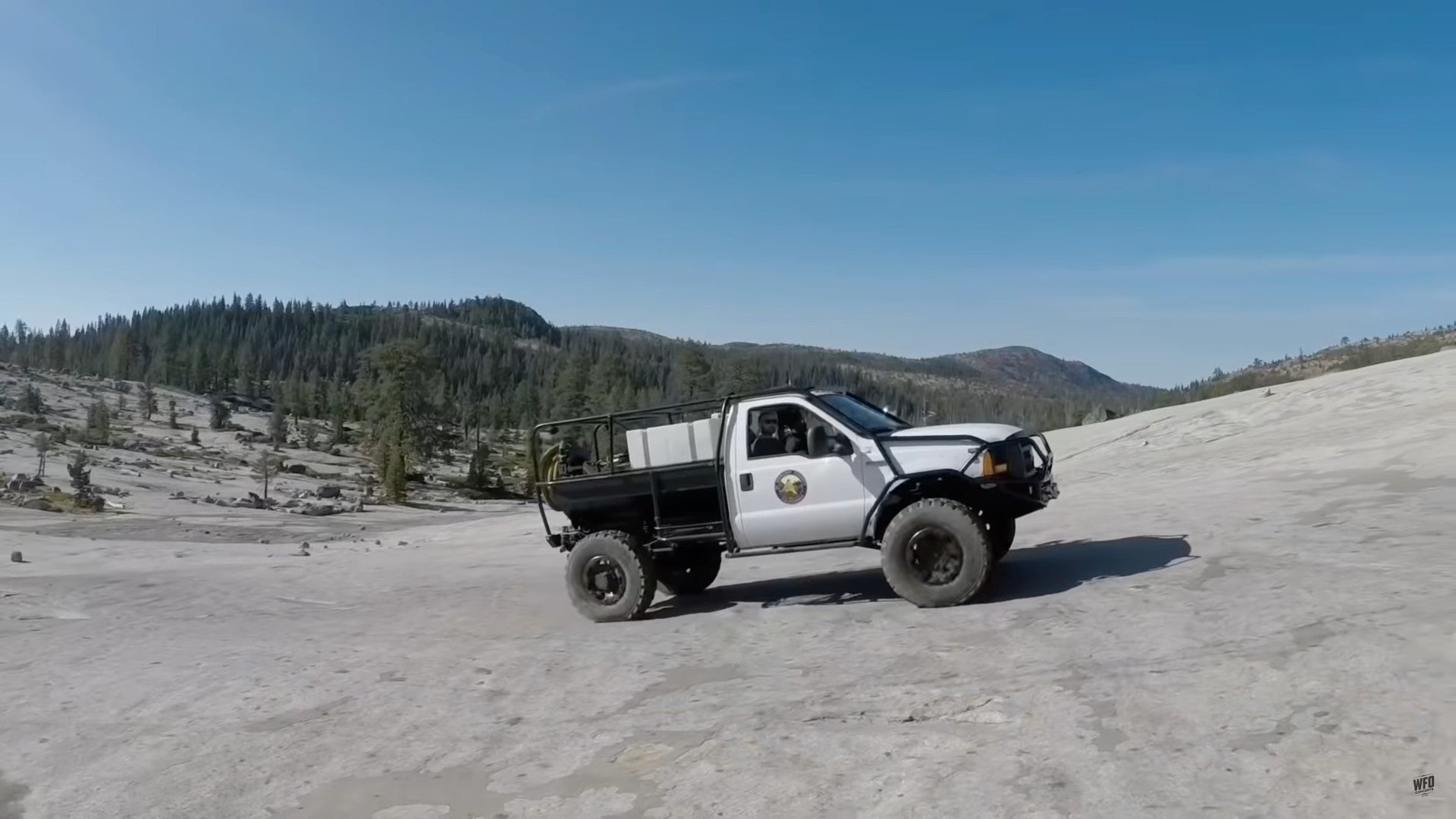 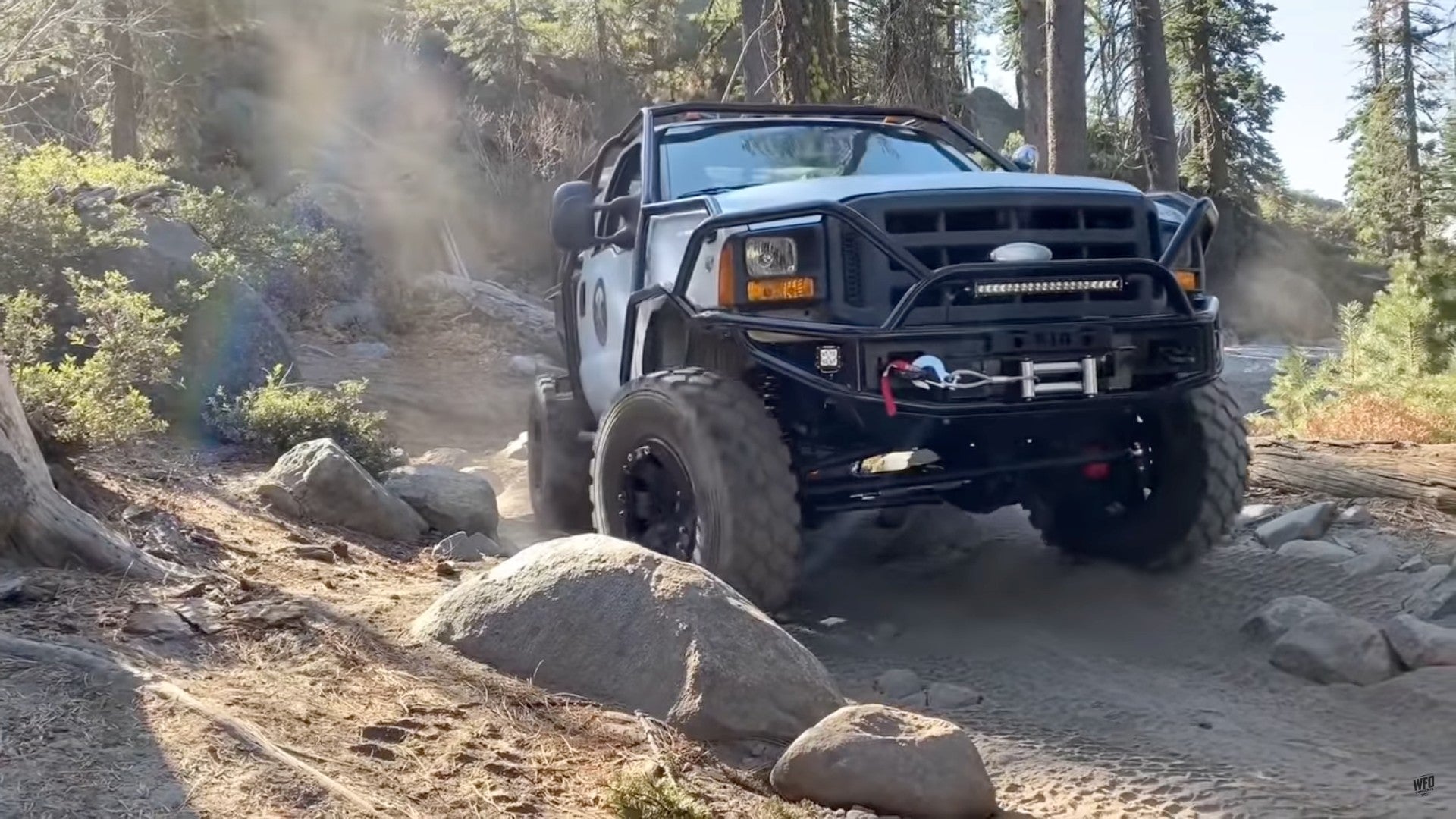 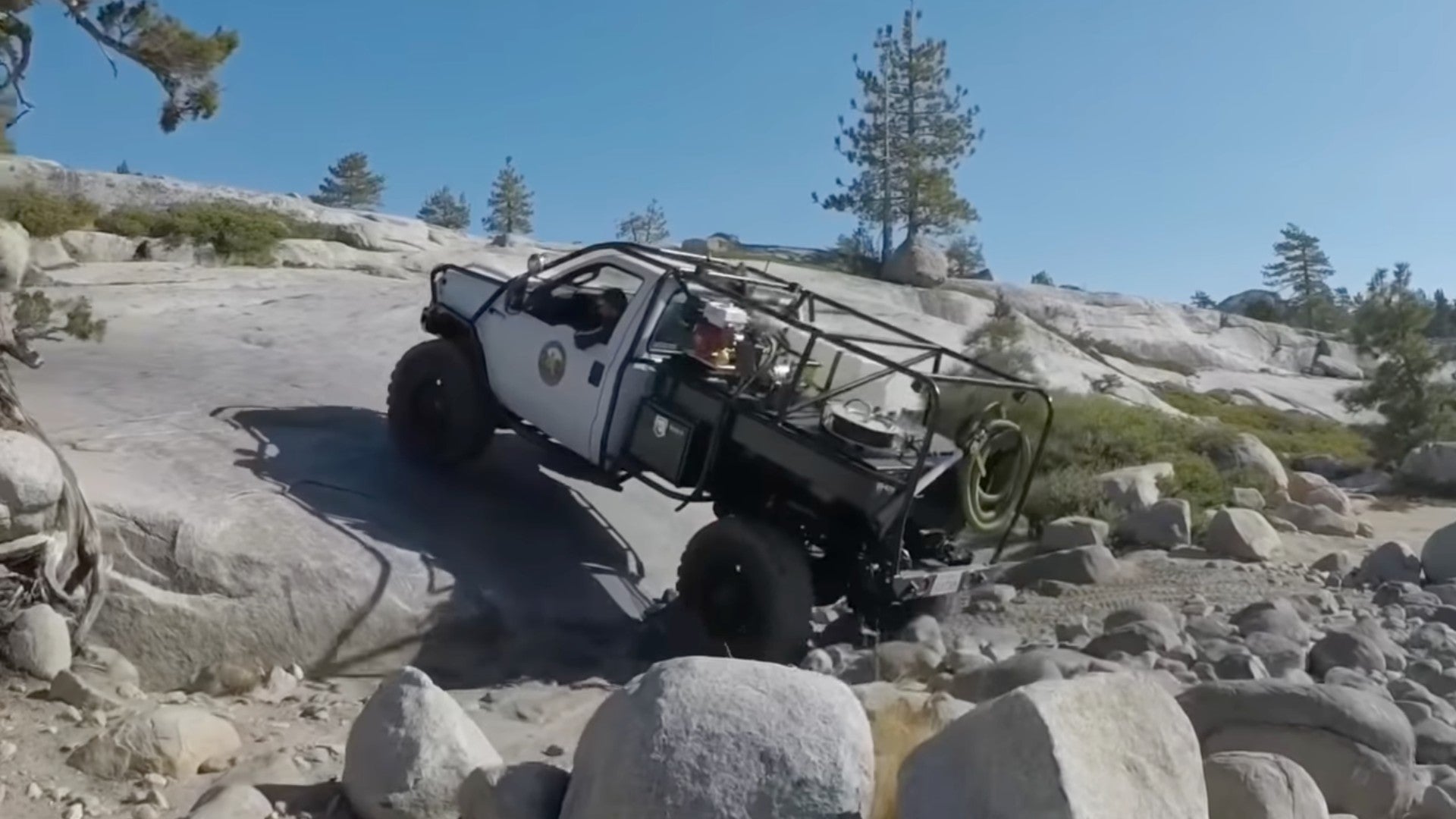 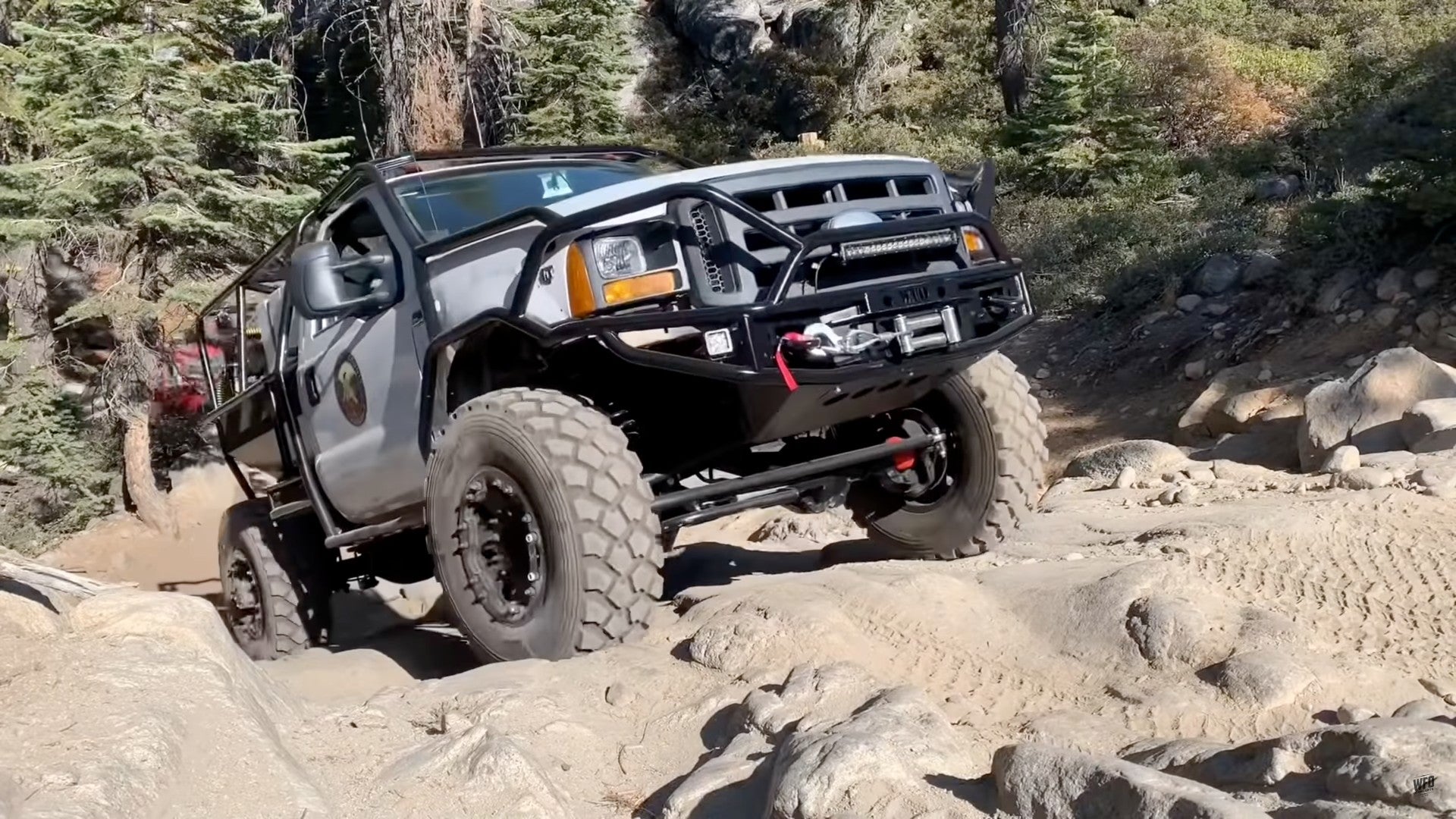 The F-550 already had a leg up with its medium-duty construction, and it helps that so many of its stock parts were tougher than what you’d find on the average pickup. The wheelbase isn’t too long and since it’s a single cab, there’s room to fit equipment on the bed. There’s tool storage on the lower half, while a small Honda motor is mounted atop the deck to operate the pump. In total, the Ford has a 400-gallon capacity, which is more than enough to service the dozen restrooms that are currently in place on the Rubicon. There’s even a power washer with 70 gallons of available fresh water for sanitizing the outhouses.

It’s great to see a truck be used the way it was intended to be, and it’s always nice to see a truly proper build like this. It won’t win any races on speed alone but, if there’s a boulder or fallen tree along the way, this Blue Oval just might have you beat.