Original ideas, the knowhow to realize them, and then the moxie to do so is a potent hand few people have the fortune of being dealt—and British railroad engineer Scott Bradley is one of them. When The Drive last checked in on Bradley, he was preparing a kerosene-burning jet turbine train called the Speedbird to tackle a Guinness World Record. But with dreams of speed postponed by 2020’s pandemic, Bradley refocused his creative energies on a smaller form: Converting Little Tikes “Tuggy” sandboxes into real, seaworthy boats.

Produced briefly around the turn of the millennium, the Tuggy was a dual-purpose sandbox and splash pool for toddlers shaped like a tugboat with a Cozy Coupe aesthetic. Because some families confused the vessel for a real watercraft, evidently getting a few kids in dangerous situations, Little Tikes pulled Tuggy’s first iteration from store shelves and redesigned it to be unquestionably sea-unworthy before offering it again for a couple years.

But in doing so, though, Bradley says Little Tikes inadvertently made Tuggy even easier to turn into a boat, paving the way for his whimsical nautical adventure. 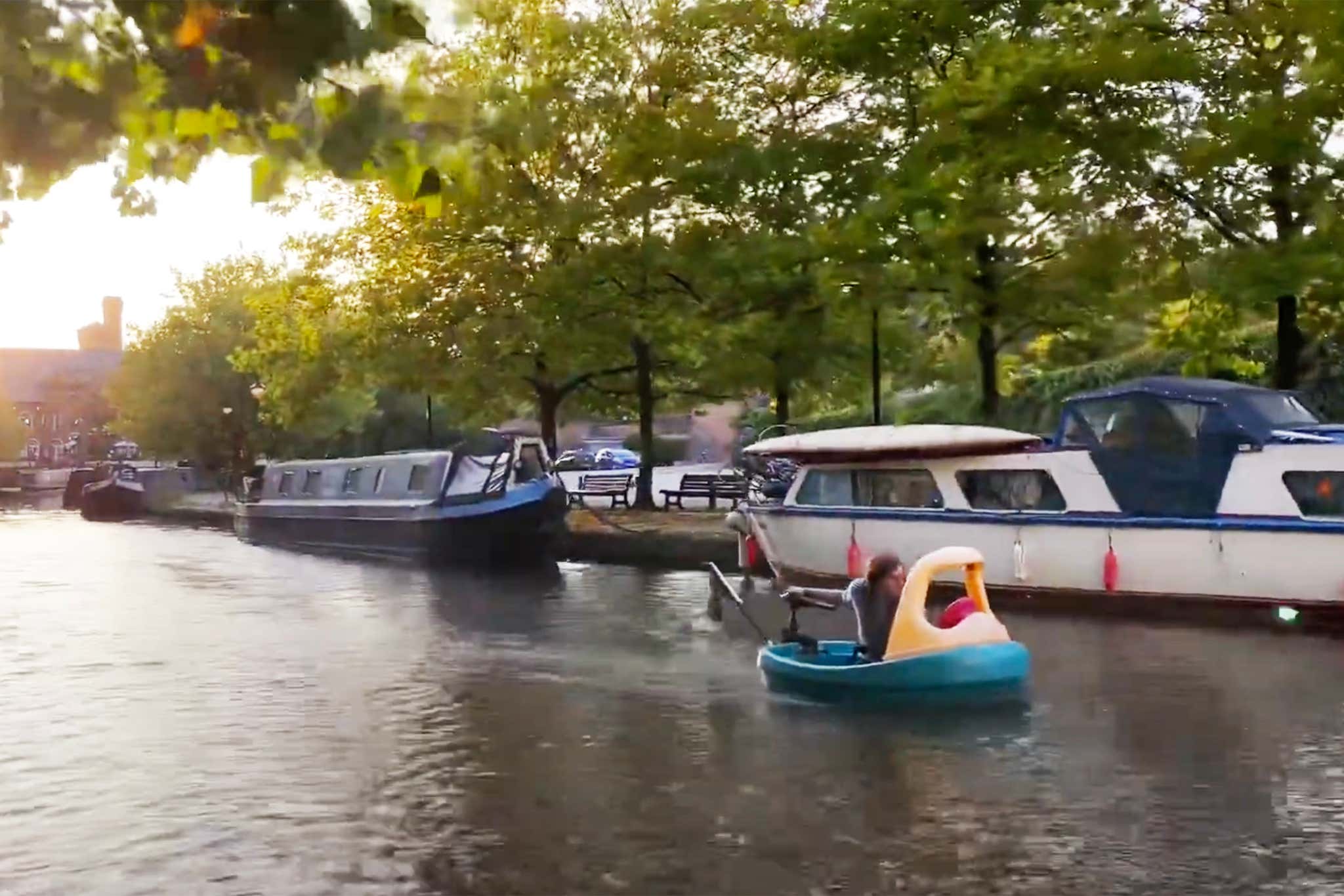 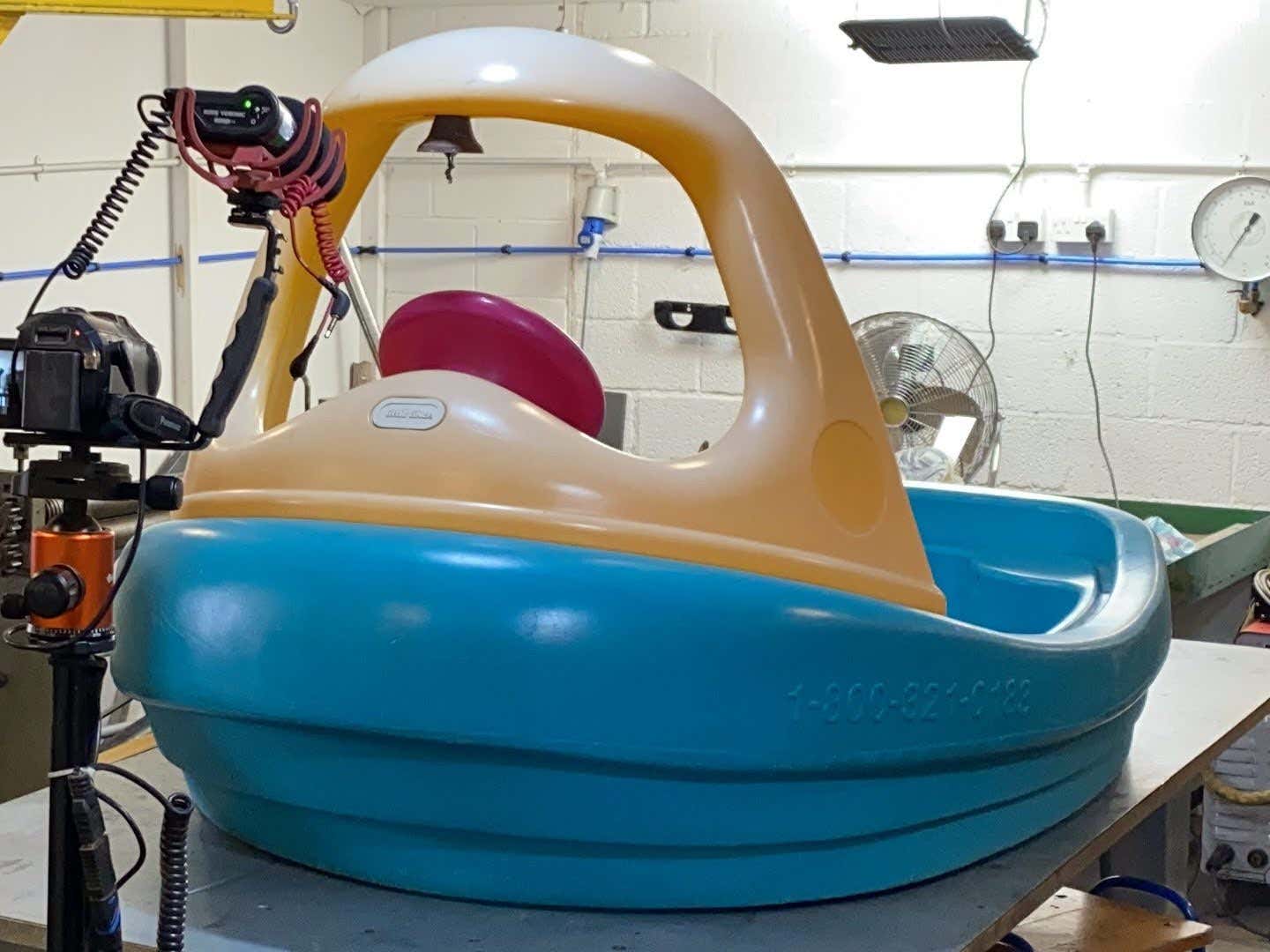 “So, the sandbox I needed was only sold for around two years, 20 years ago—and all of them by this time had been scorched to a crisp with UV damage from two decades of sun, and children climbing over them. Of course, almost all of them had ended up in landfills by this point,” Bradley explained to The Drive. “I had been searching for just one ‘Tuggy’ for almost 10 years—and had now reached the point that I had commissioned a USA-based shipping company to import one that I’d found on a Minnesotan Craigslist advert on my behalf into the U.K. It was going to cost nearly $1,000!”

But then, a sudden change of fortune: One of Little Tikes’ redesigned, conversion-friendly Tuggys surfaced for sale on eBay in the United Kingdom. Bradley threw a max £500 bid its way, only to win the soon-to-be watercraft for a mere £6, demand being evidently lower than expected. He then personally drove 400 miles to collect his unicorn and commence its transformation into a real boat.

Before he could, though, he struck gold again. Three times. 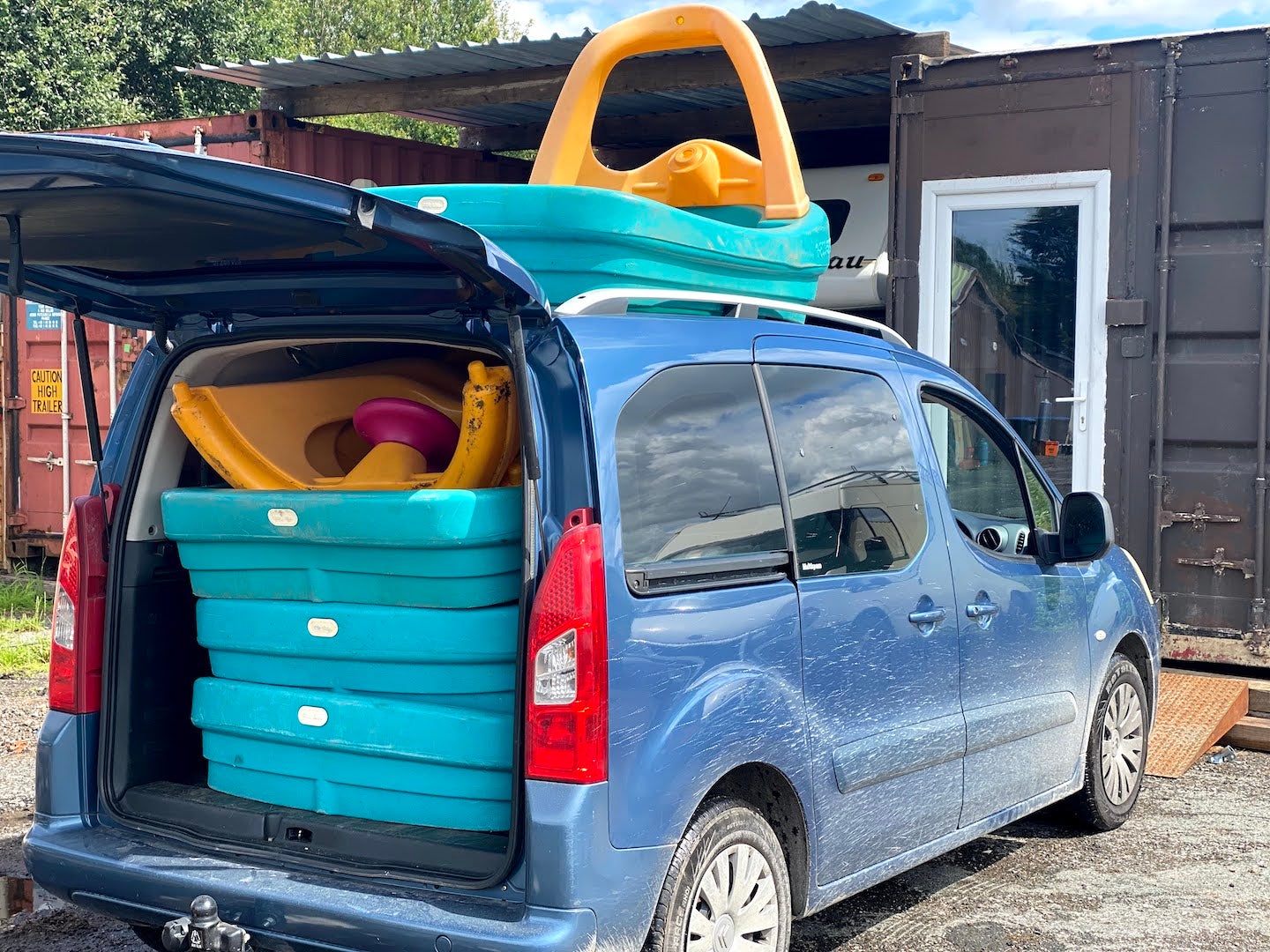 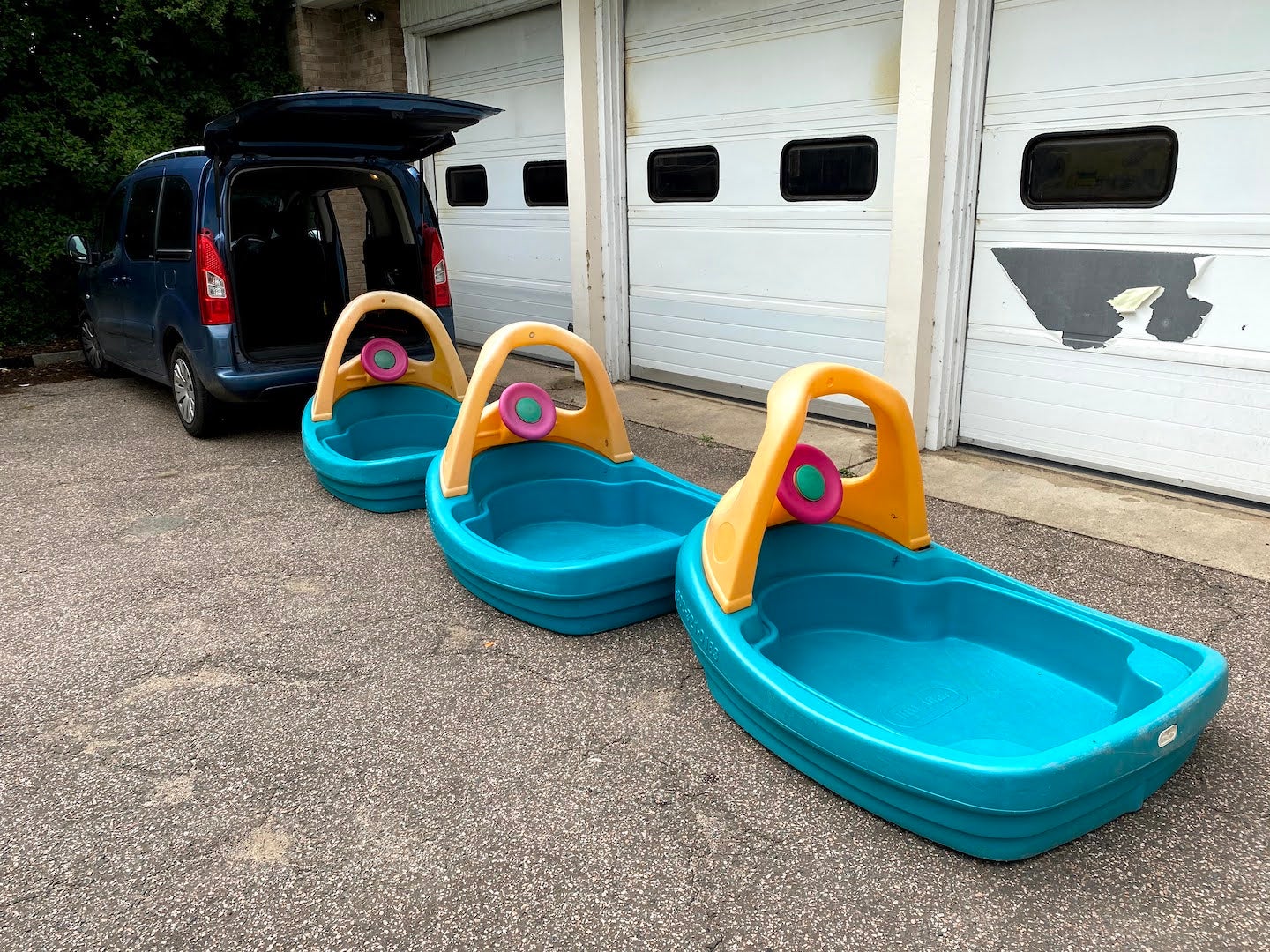 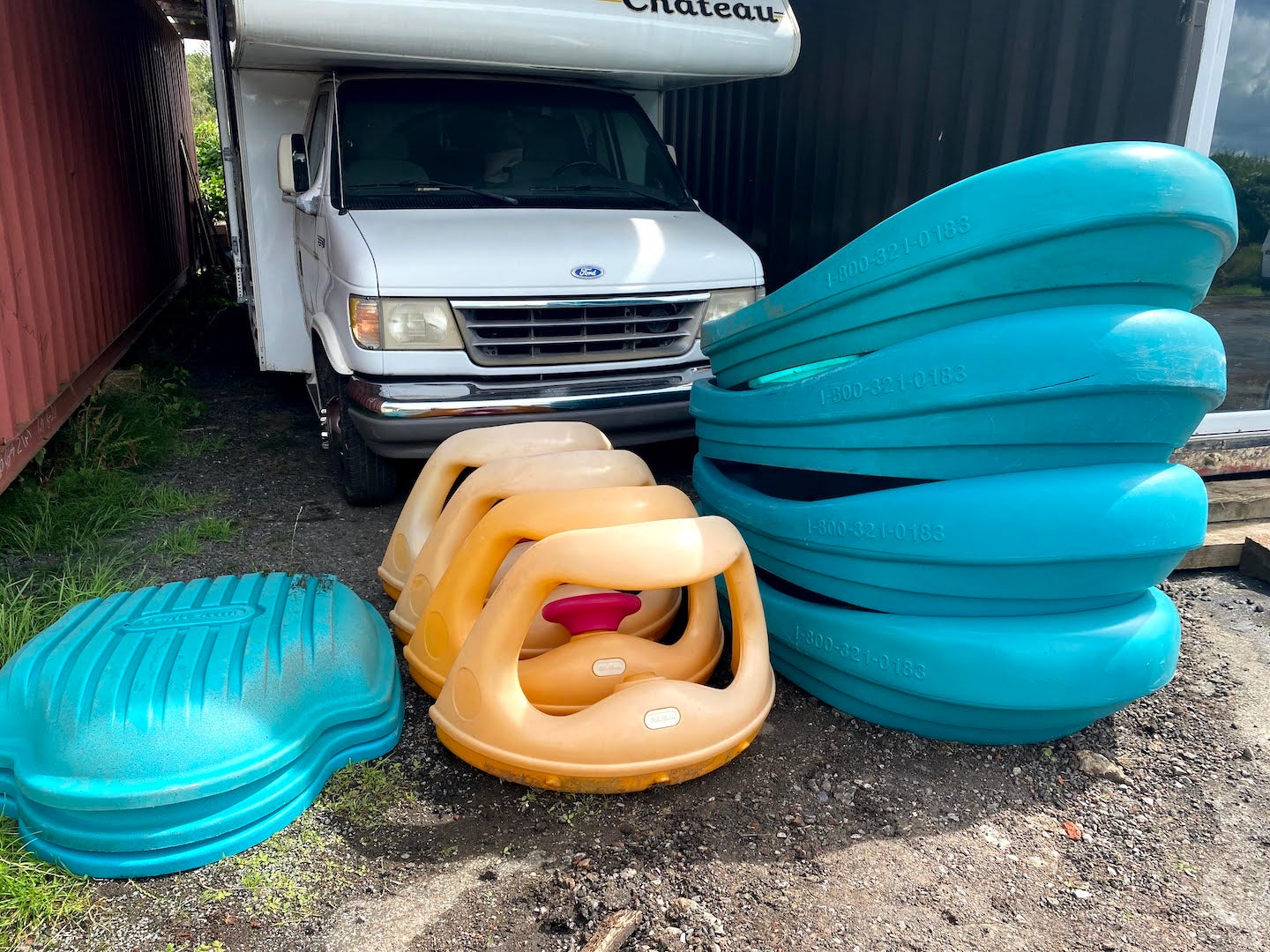 “During the lockdown, people were clearly having some sort of clear-out of their garages and gardens, because within the space of six weeks, another three [Tuggys] appeared on eBay, and I just couldn’t help myself,” Bradley recalled. “I drove around the entire country, thousands of miles, buying every last single one of them, and entering into bidding wars with local families, and leaving innocent sellers entirely confused as to why some maniac would travel 300 miles for an old plastic kids sandpit.”

With the Tuggy Armada in his possession, Bradley began researching whether others had tried the same project. There were a few attempts, but none done especially well, most involving expanding foam to make it float for a few minutes at most. Bradley wanted a boat, not a gimmick. Being an engineer, he worked out a simple (by his profession’s standards) solution: 3D-scanning the Tuggy’s hull, and having a new floor laser-cut from 6061 T6 aluminum. 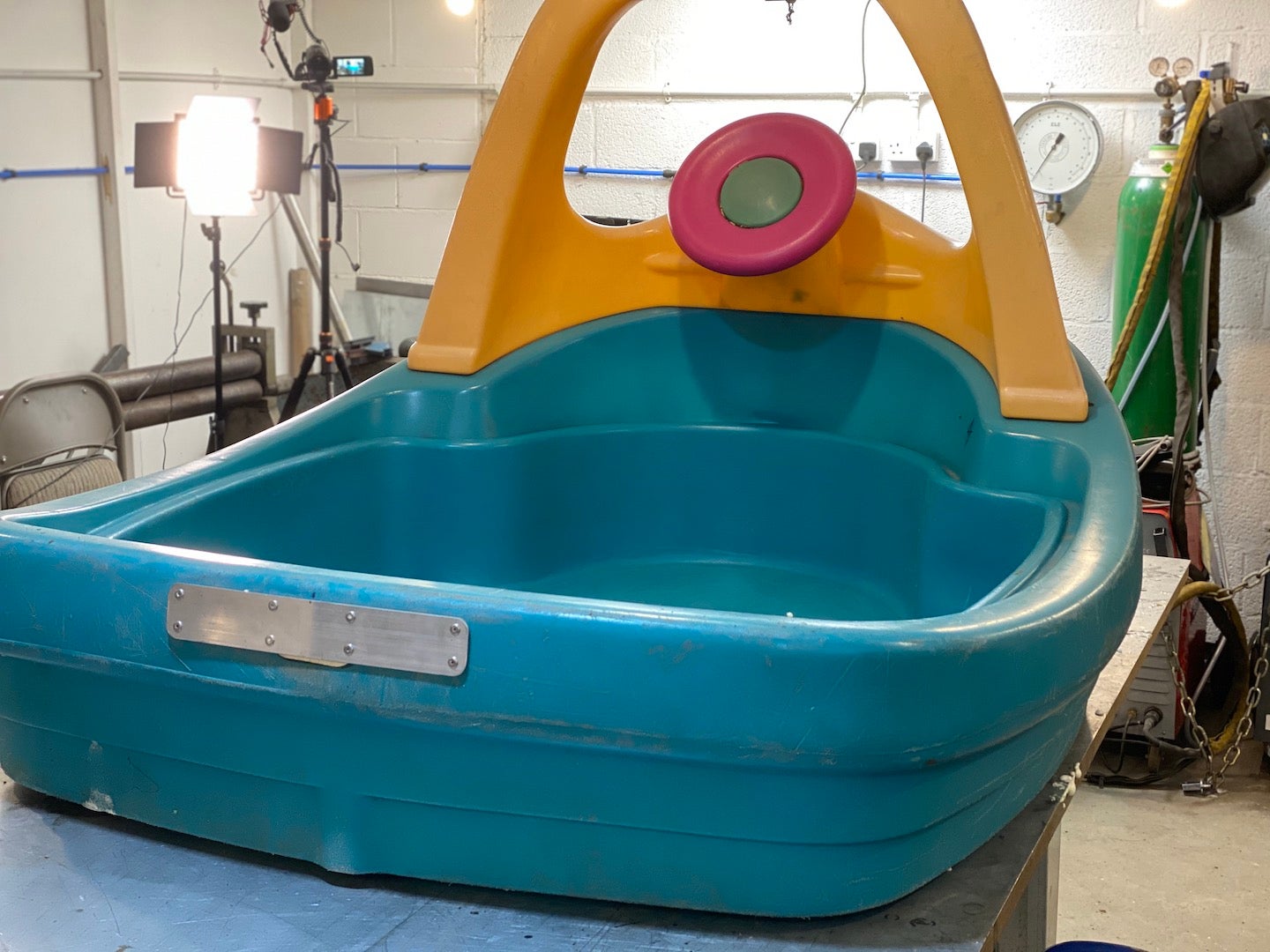 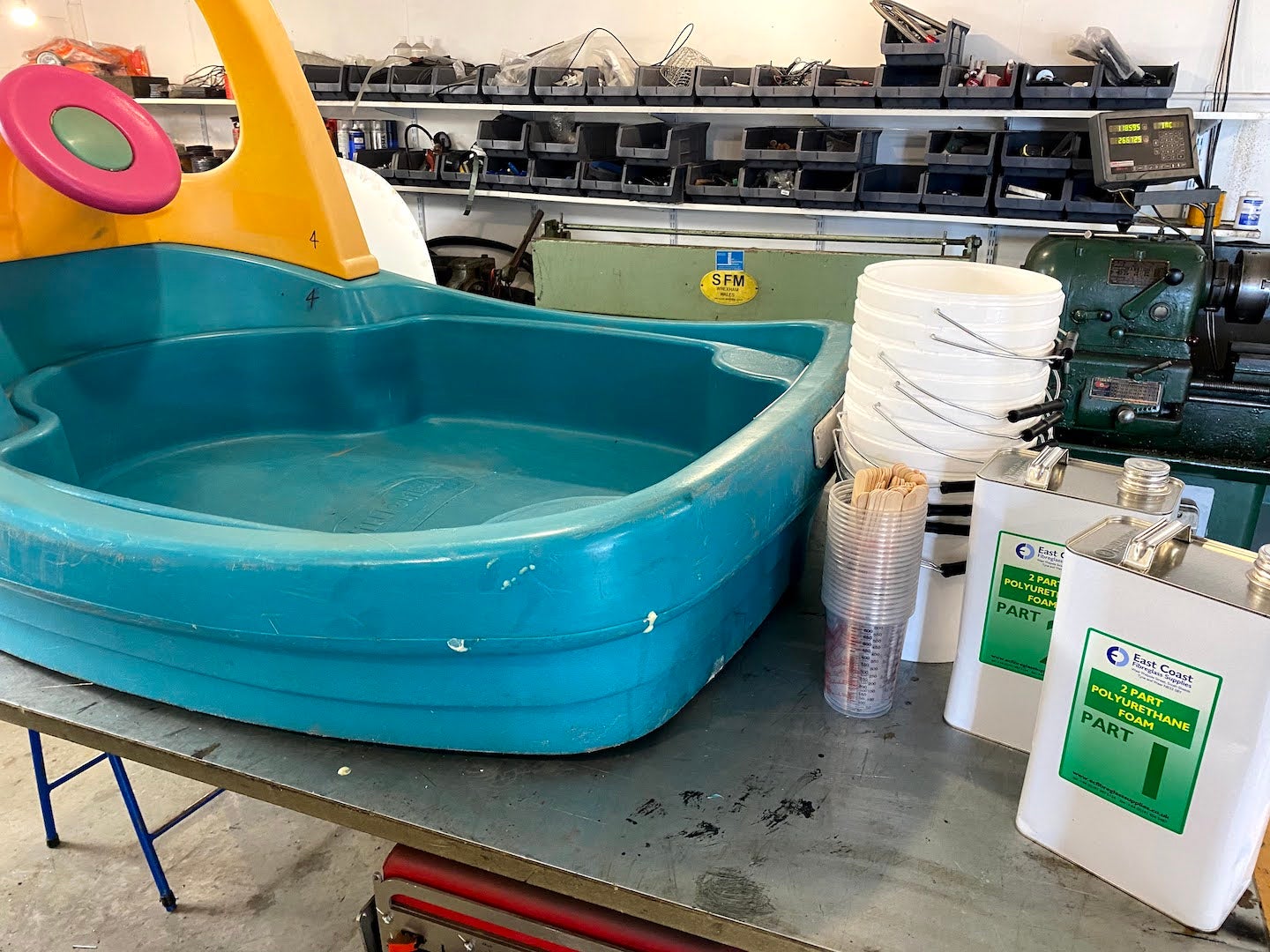 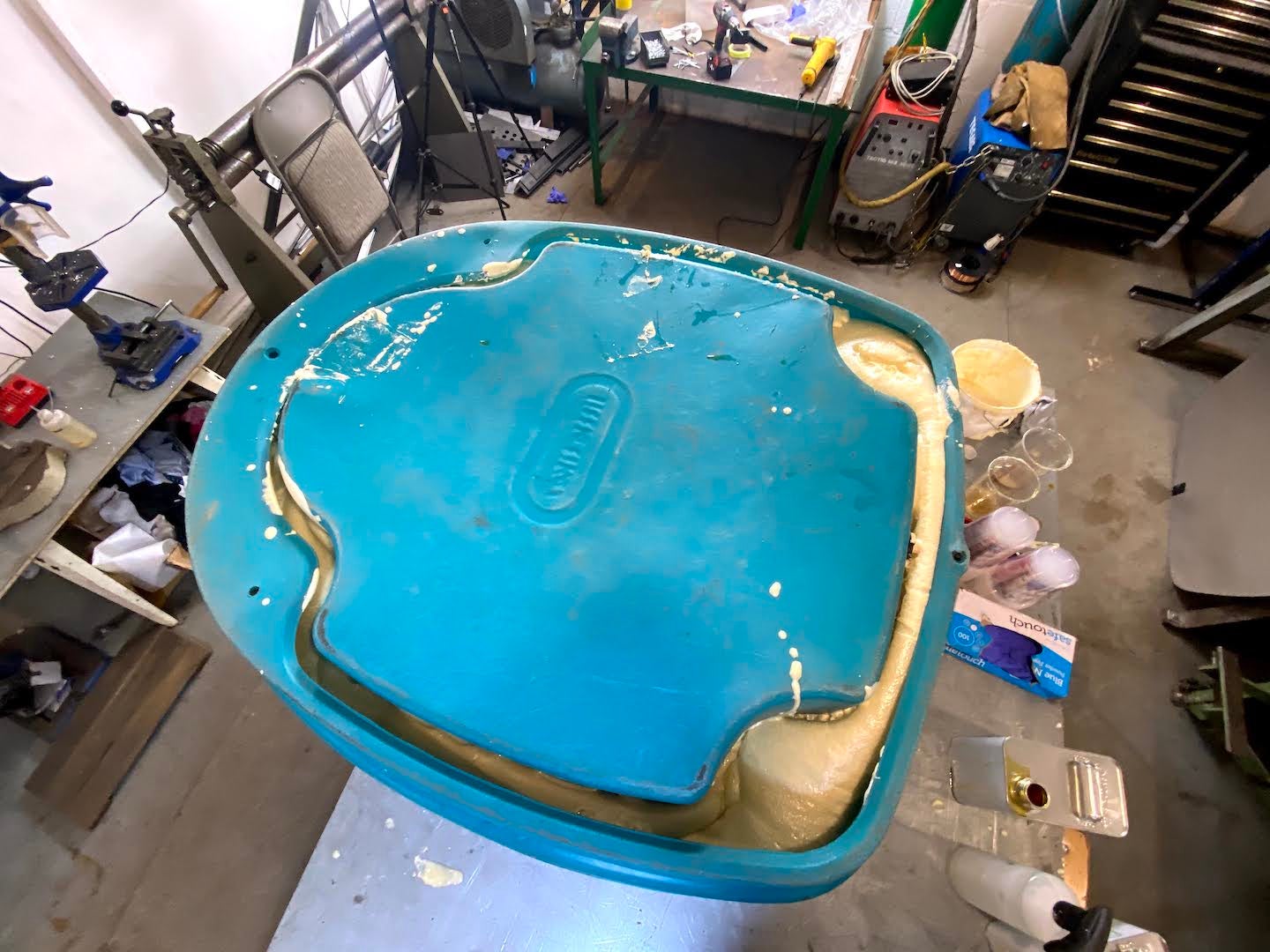 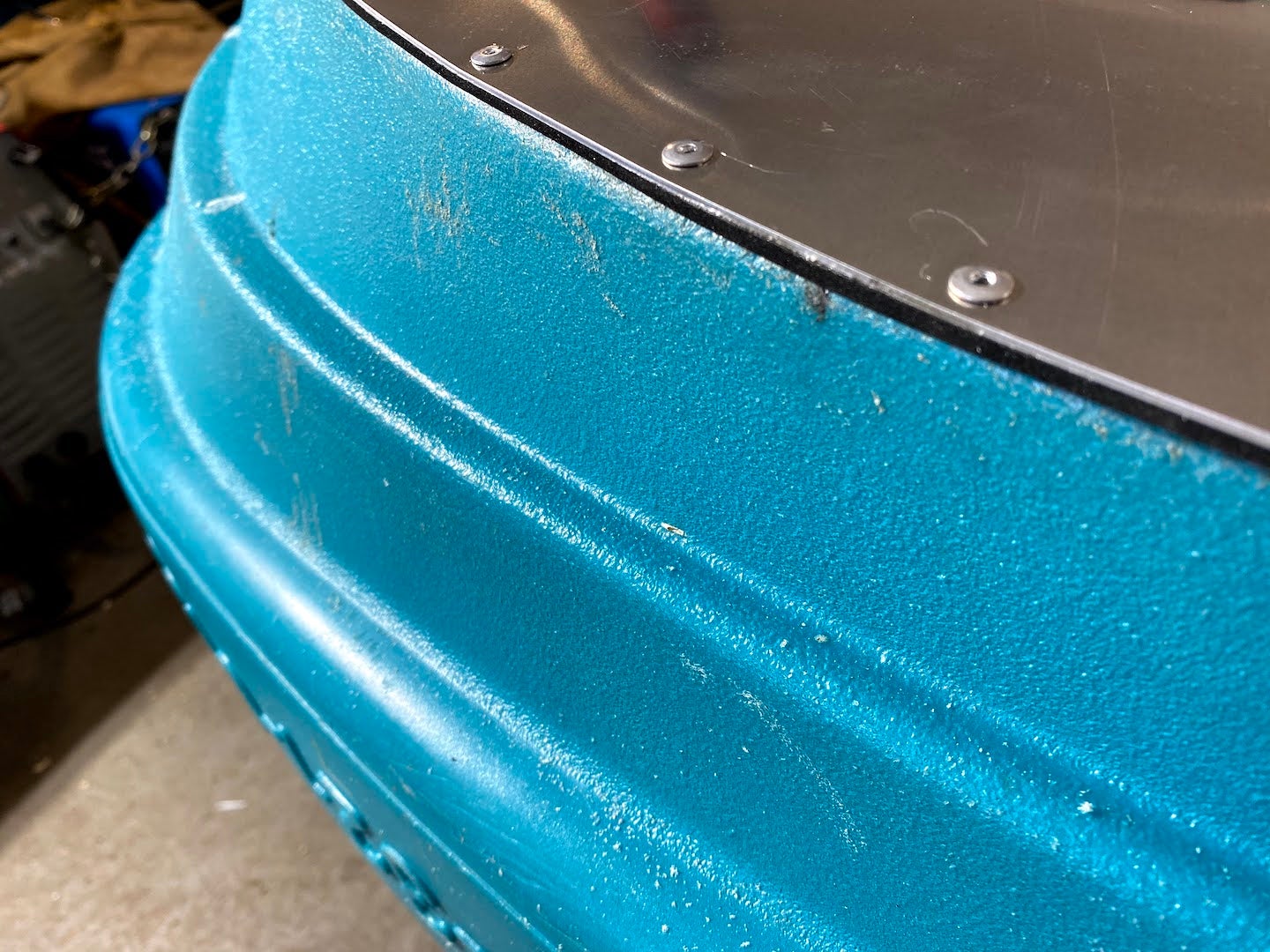 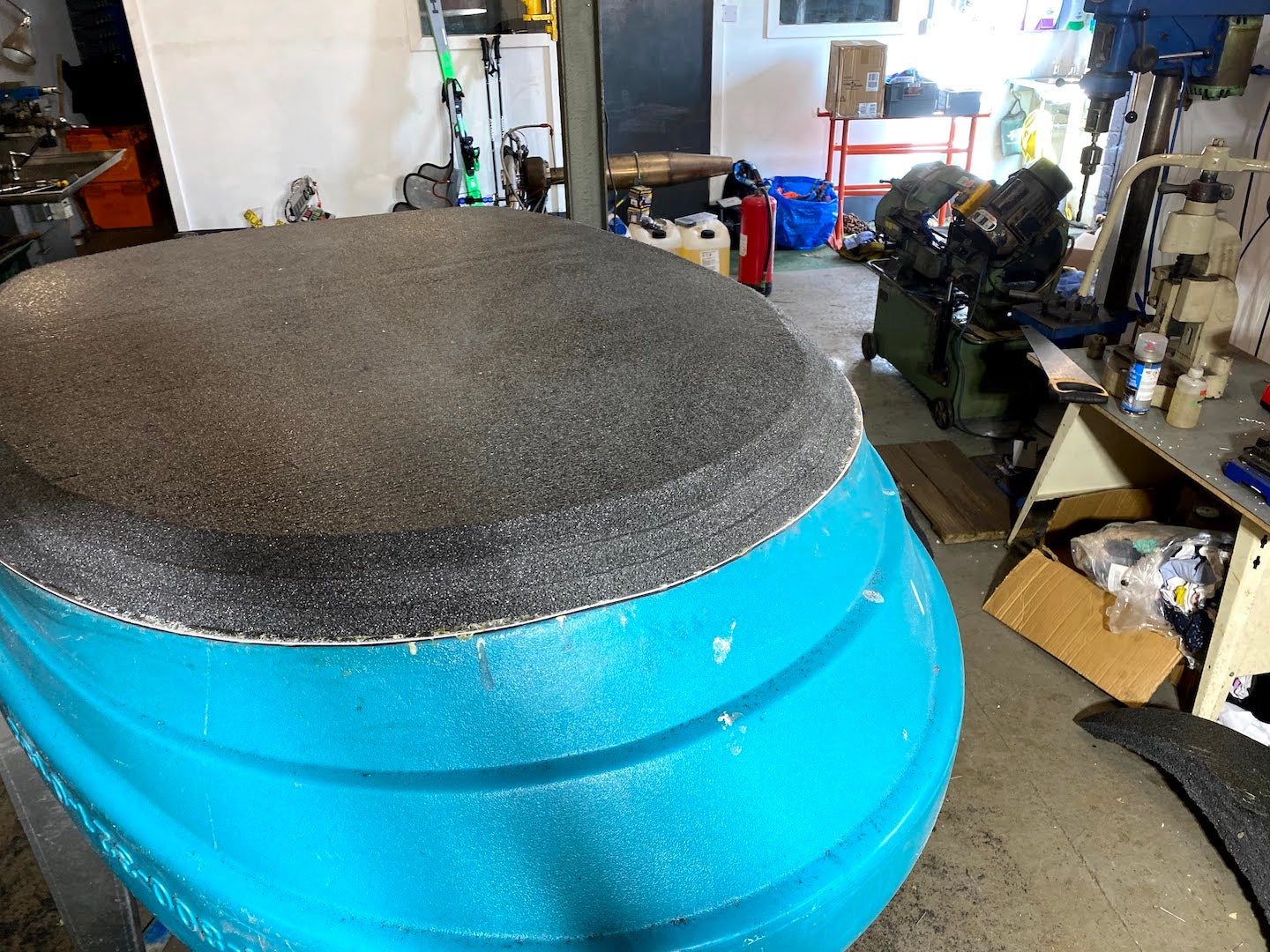 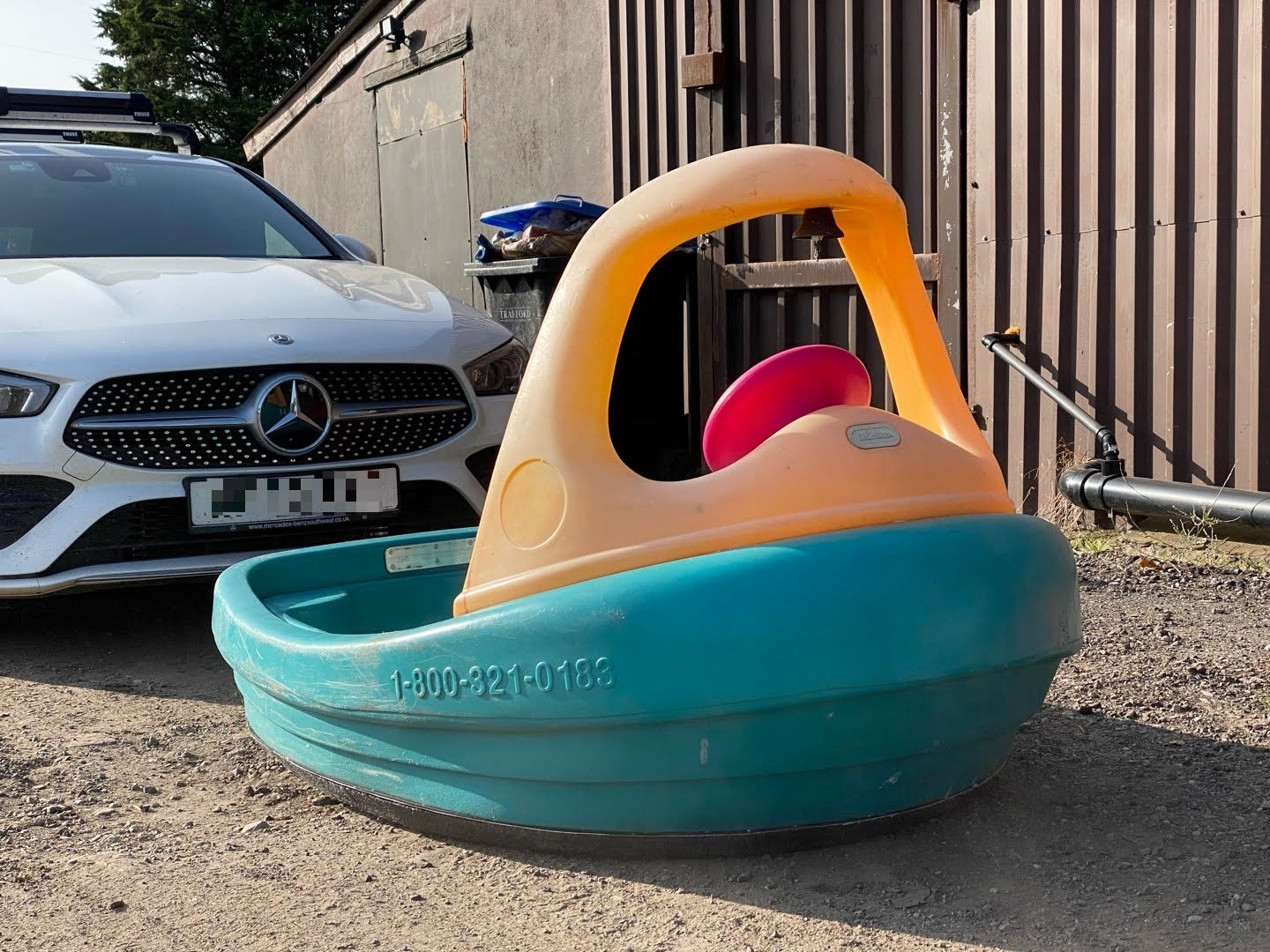 Before attaching this floor, Bradley filled Tuggy’s hull with about 15 pounds of closed-cell polyurethane foam to generate almost 400 pounds of buoyancy—more than enough to keep his six-foot-two frame afloat. Not being a material that bonds well with adhesives, the aluminum floor had to be sealed with a custom neoprene gasket and clamped down by 320 individual rivets. From there, all Tuggy needed was an aluminum-backed hardwood transom to mount its propulsion: a 12-volt Minn Kota trolling motor.

It’d be one thing to take this creation to a random pond and test it out. But Bradley wanted to use it exactly like a real boat, which meant it needed to be registered and insured. Yeah, he really went all the way with this.

“Our waterways need insurance and registration, so I had to find a marine insurance specialist who would insure a children’s sandbox,” said Bradley. “It took some work, but I did eventually find a company who would cover it, and after a few very, very confused phone calls from their administrative staff—it turned out they’d googled the ‘make and model’ of the ‘boat’—cover was arranged for a full £5,000,000 of third-party liability. And so, a registration certificate was obtained, and it was finally time to hit the water.”

“With the help of a friend, I got Tuggy into a local canal on what was a lovely, warm day. Within seconds it became clear that not only did the Tuggy float and handle like a dream, but also, the sight of a fully grown man in a plastic sandbox playing On a Boat by Lonely Island through his portable speakers was clearly not a normal sight, and very quickly, we were being hounded by dozens of local pub- and restaurant-goers armed with camera phones, and shouting silly things at us!”

Spurred on by Tuggy’s successful 90-minute maiden voyage, Bradley reached out to recruit friends to his nascent Tuggy Navy, and received a resounding response.

“I started to receive DMs from friends who had quickly been out and hoovered up any of these things that appeared for sale again [sic], and now I think we’re up to a full nine ‘Tuggys’ in the process of conversion into proper boats,” continued Bradley, who has already been contacted about a Tuggy race series.

“A local watersports lake, AVOS Watersports Den, offered to host the inaugural Tuggy Championship. An event on a private lake, with no speed limits and shallow water, perfectly suited to getting a load of idiots on plastic children’s sandboxes up to speed, and with a full-on race calendar to suit,” mused Bradley. “So watch this space—the Tuggy Championships might just be the next big thing in boats!”