If you’re feeling a bit of Déjà vu of seeing yet another reveal of Acura’s large three-row SUV, the MDX, you’re not alone. But this is it, the real reveal of the actual production car that will be in Acura dealers early next year. You’re also not alone in feeling like you did in fact already see this MDX. That’s because the “prototype” was a thinly veiled preview of the production car. The look and feel of this new, 2022 Acura MDX is quite similar.

And it’s not a bad look. Acura did a good job to stay consistent with its design language introduced in the 2019 Acura RDX and put it on full display here. Thanks to the MDX’s longer and wider proportions, it’s the best example of the language yet. The MDX has enough length to let the lines flow cleanly front to back and enough width, three-inches wider than the 2021 TLX sedan, to exude a stable stance. I like it.

Underneath the new design is a new structure that is both unique to Acura and to the MDX, at least for now. Acura claims that it is roughly 35 percent more rigid than the outgoing model’s. In front is a new double-wishbone suspension geometry replacing struts. In back, the multi-link set-up was updated.

Going double-wishbone allowed engineers to simultaneously improve ride and handling of the MDX. More specifically, it allows for better wheel control and the ability to soften certain suspension bushings to add comfort and stiffen others for handling sharpness without suffering a harsh ride penalty. Acura also beefed-up the stabilizer bars, to reduce body roll. The springs are a bit softer. But the steering rack is faster. 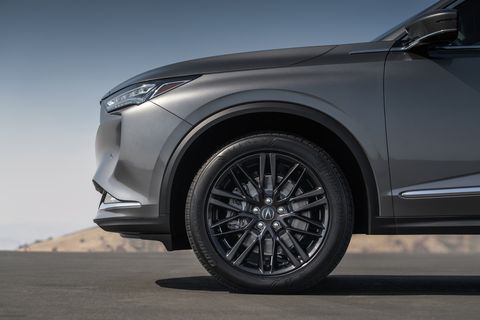 Because there’s less flex in the structure itself, engineers are confident this MDX will handle better than the outgoing model—and ride cushier. And that’s without adjustable shock absorbers. We’ll judge that when we get the chance to drive it. We do get wider wheels and tires to play with. Encouraging.

With all this new kit, it’s a bit of a surprise that the powertrain is largely carried over from the third-generation MDX, retaining its 290 horsepower, 267 lb-ft of torque. Acura didn’t want the install the 2.0-liter turbo motor that’s making its way in many other models because the naturally aspirated V6 has noise, vibration, and harshness advantages, as well as, real world fuel economy benefits with a heavier vehicle such as the MDX.

That said, the automatic transmission is new, gaining a gear for 10-speeds in total. As a result, the fourth-generation MDX has a more aggressive first-gear ratio for improved off-the-line acceleration, all while maintaining a low highway cruising engine speed. Furthermore, the new gearbox can drop up to four speeds at once for faster “kick down” and acceleration. Optionally available is the latest generation of Acura’s torque vectoring SH-AWD or Super Handling All-Wheel-Drive, but the MDX is front-wheel-drive standard. Towing capacity holds steady at 5,000 lbs. for the AWD MDX, 3,500 lbs. for the FWD MDX. 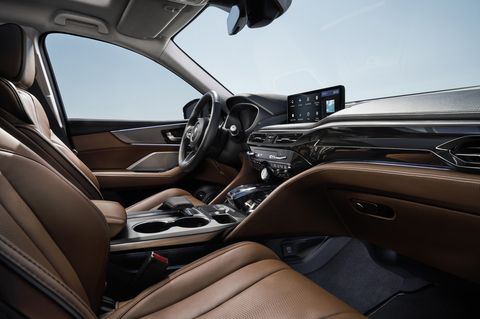 Inside, Acura made significant changes to the interior of the MDX. The instrument cluster is now a 12.3-inch screen, as is the center console infotainment display. That screen can, among other things, wirelessly connect Apple Carplay and Android Auto as well as connect to Amazon Alexa. The control center works similarly to the RDX. Also similar, the PRNDL is push button.

For all three-rows, the MDX has installed a panoramic roof as standard equipment, which includes a sun shade that can be opened and closed via a smartphone app by the second and third row passengers, though Acura says the driver has to give permission first. The third row benefits from two more inches of headroom than before.

Also standard on the MDX is a removable middle seat for the second row. That gives the option to sit three in the middle, have a folding armrest with cup holders, or a walkthrough space between the two captain’s-chair-style middle row. It’s a crafty option for the bustling families among us.

Starting price for the 2022 Acura MDX comes to $47,925, a little more than $2,000 above the current price of a 2020 model. That’s pretty low for what Acura now calls its flagship model—the NSX is a halo, not a flagship. Of course, if you can wait until the summer of 2021, the much more flagship worthy, on paper at least, MDX Type S will arrive with its 355 horsepower 3.0-liter turbocharged V6, 21-inch wheels, and other niceties.

Regardless. The price is certainly competitive in the three-row premium SUV space. And the MDX has specs to give us hope it will engage the driver and provide a bit of satisfaction behind the wheel. And we’ll be sure to share if that’s the case, once we get the chance to drive it. 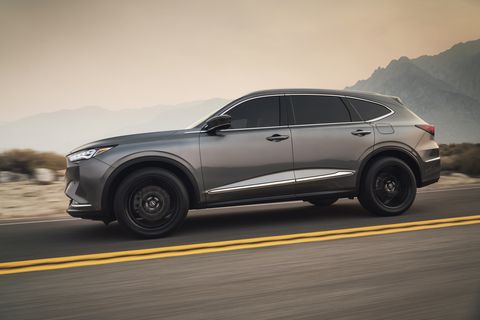