Ford V Ferrari was a cinematic blockbuster that set out to tell the abridged tale of how an American car company took the fight to Ferrari in Europe, and came out the victor. Featuring big names like Matt Damon and Christian Bale, the automotive star of the show is the Ford GT40, the racecar that took Ford to four Le Mans victories in the 1960s. Obviously, the production needed a few stunt cars to shoot the film, and now, one of those very replica GT40s will be sold at the upcoming Mecum Auctions in Dallas this September.

As reported by Silodrome, the car in question played the role of Dan Gurney’s GT40 bearing the number 3, and was used in the Le Mans racing scene. The car was then subsequently restyled to play the role of the number 88 car as driven by William Wonder in the 24 Hours of Daytona. The stunt cars for the film were built by Race Car Replicas down in Michigan, and faithfully recreate the specifications of the 1966 GT40. Out of six GT40 stunt cars built for the production, this is the only one that was granted a VIN and also a title. So, yes, if you were wondering, you could theoretically register this GT40 and use it to do your grocery shopping. 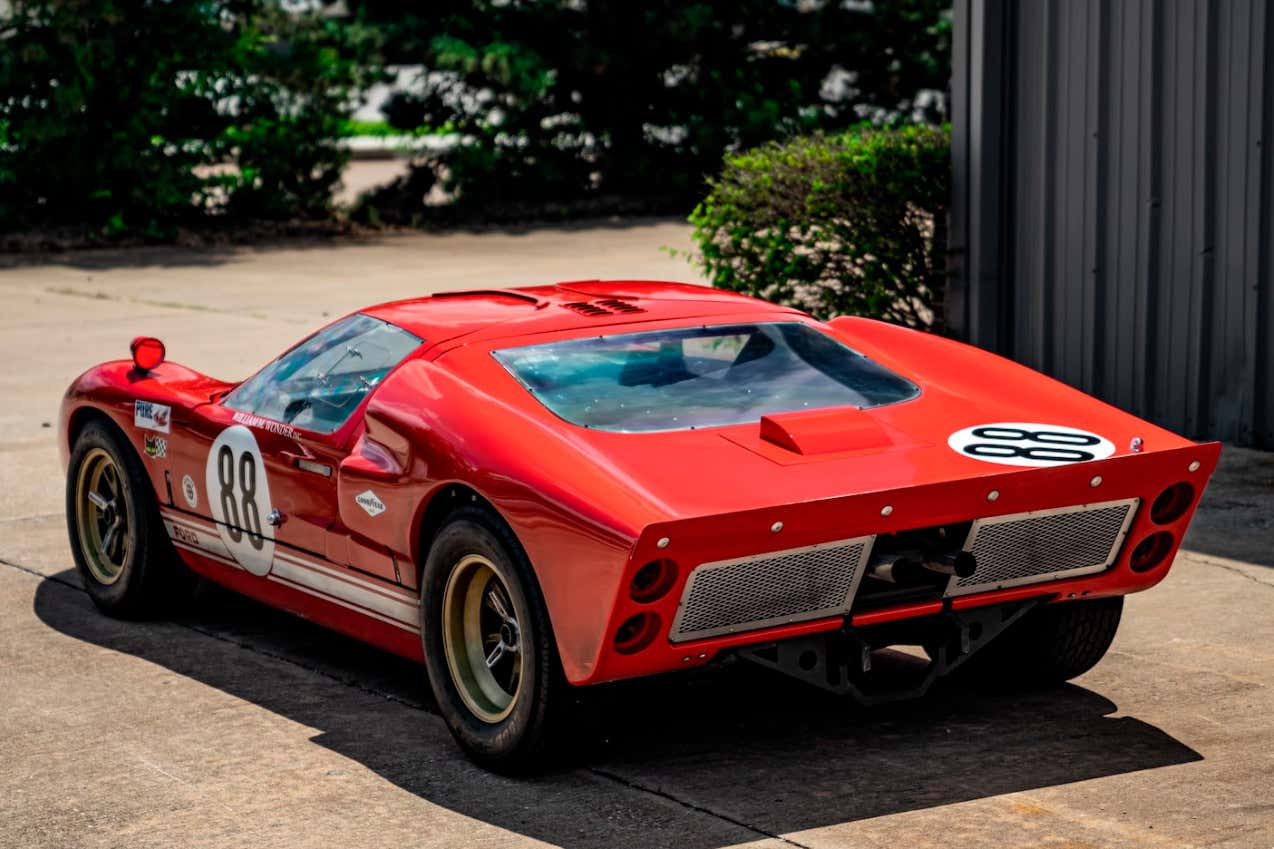 The car looks resplendent in red, especially paired with the gold period-correct wheels. The rims are wrapped in those glorious 295/50R15 tires with the deliciously fat sidewalls, giving the car that vintage look that’s so completely different from today’s performance cars. It reportedly packs a 5.7-liter V8 paired with a 6-speed transaxle under the rear hatch, though details are scant and no photos are available showing the powerplant. Interestingly, the steering wheel is on the right-hand side, but the shifter is placed to the right of the driver as you’d typically see in a left-hand-drive car. This should make it less of a trial for those familiar with LHD cars to get comfortable. 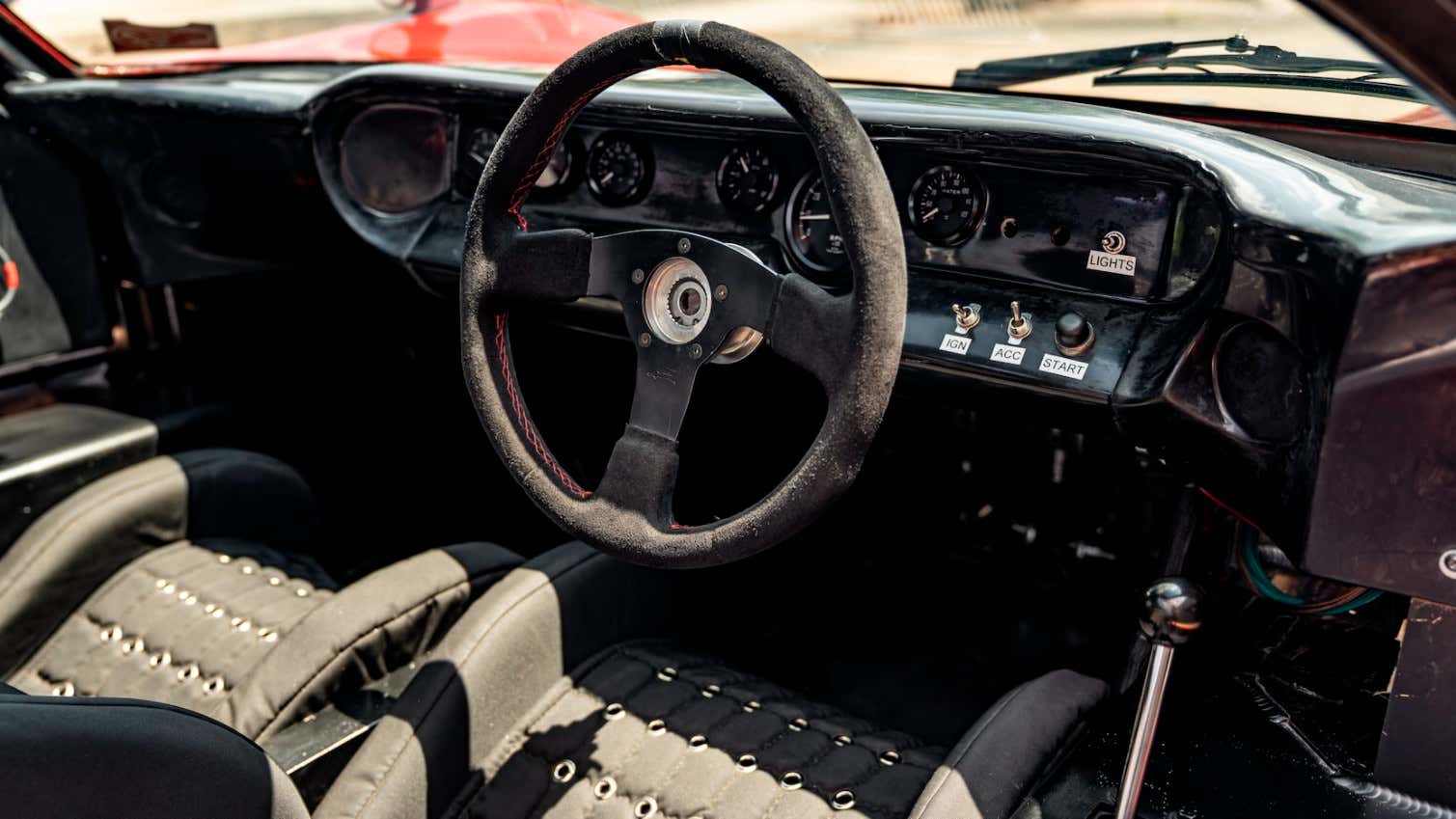 As a stunt car, it’s not a certainty that any of the big on-screen names got behind the wheel of this car, and none are mentioned in the auction. Typically, movie productions will have specially designated “camera cars” that are the prettiest and most visually perfect for shooting the scenes with actors. Stunt cars are designated to handle all the real driving action, as you’d expect. This allows production to move more quickly, as there’s no need to repair cosmetic damage incurred during stunt driving to keep filming scenes with the actors. 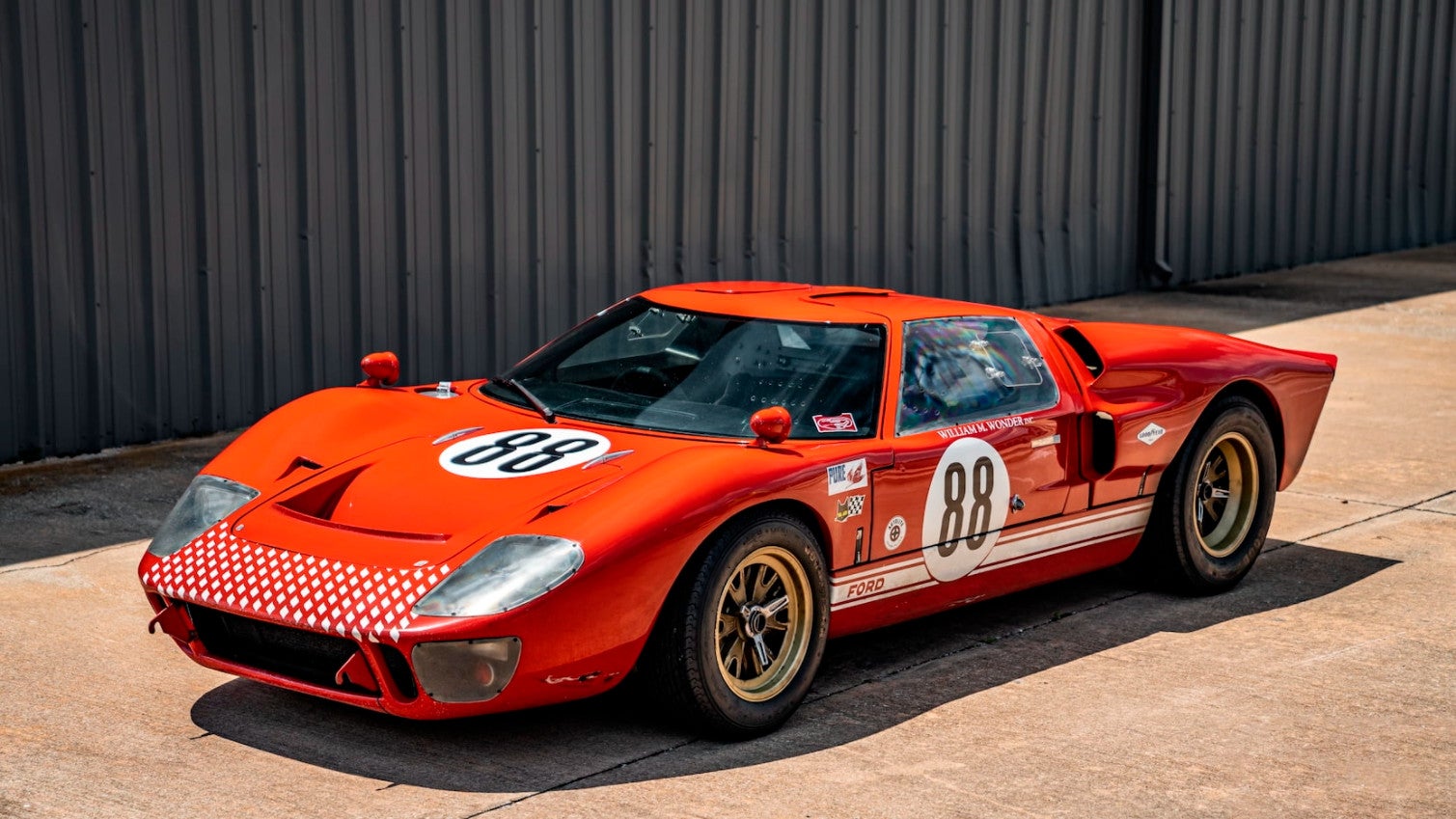 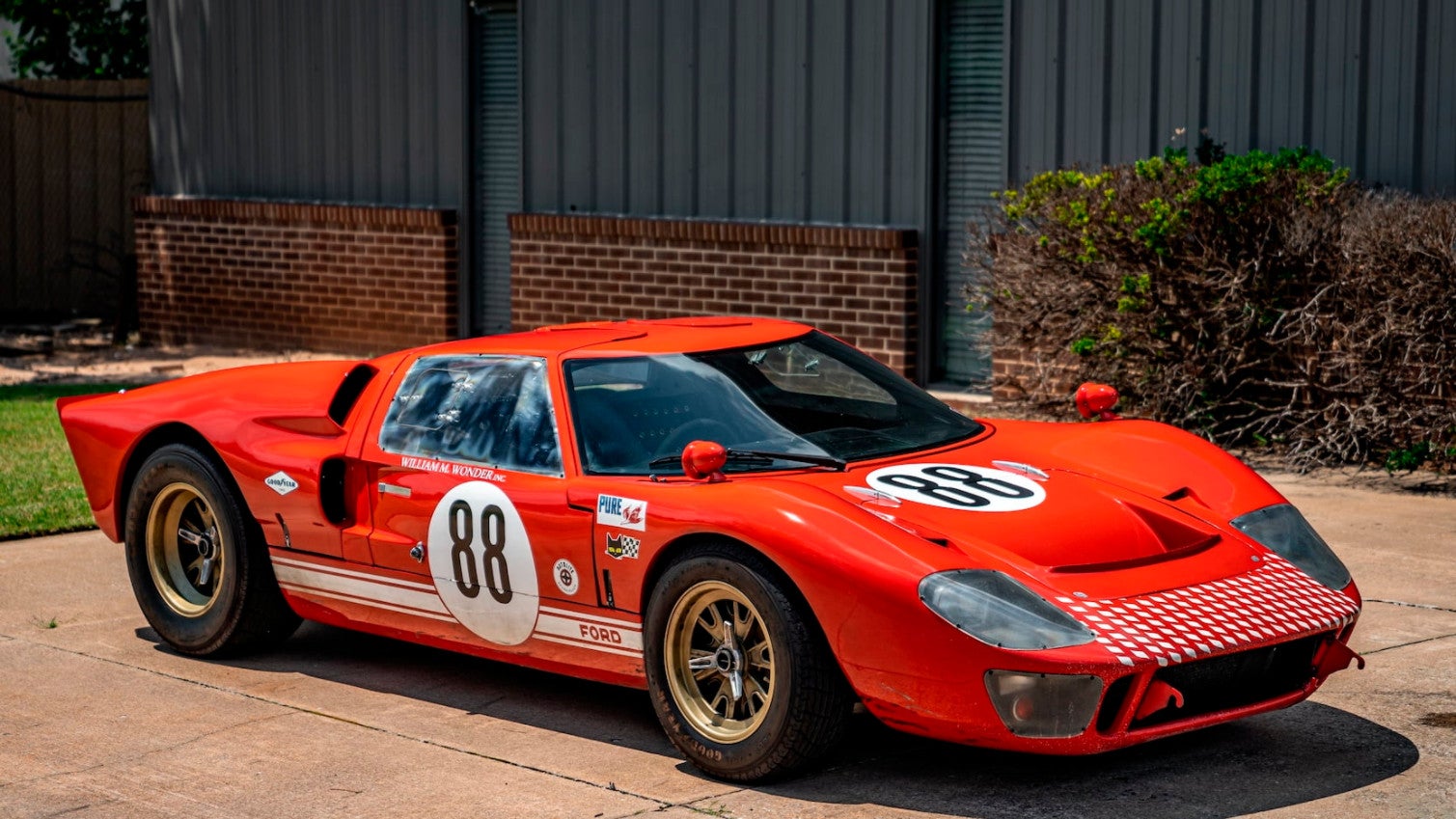 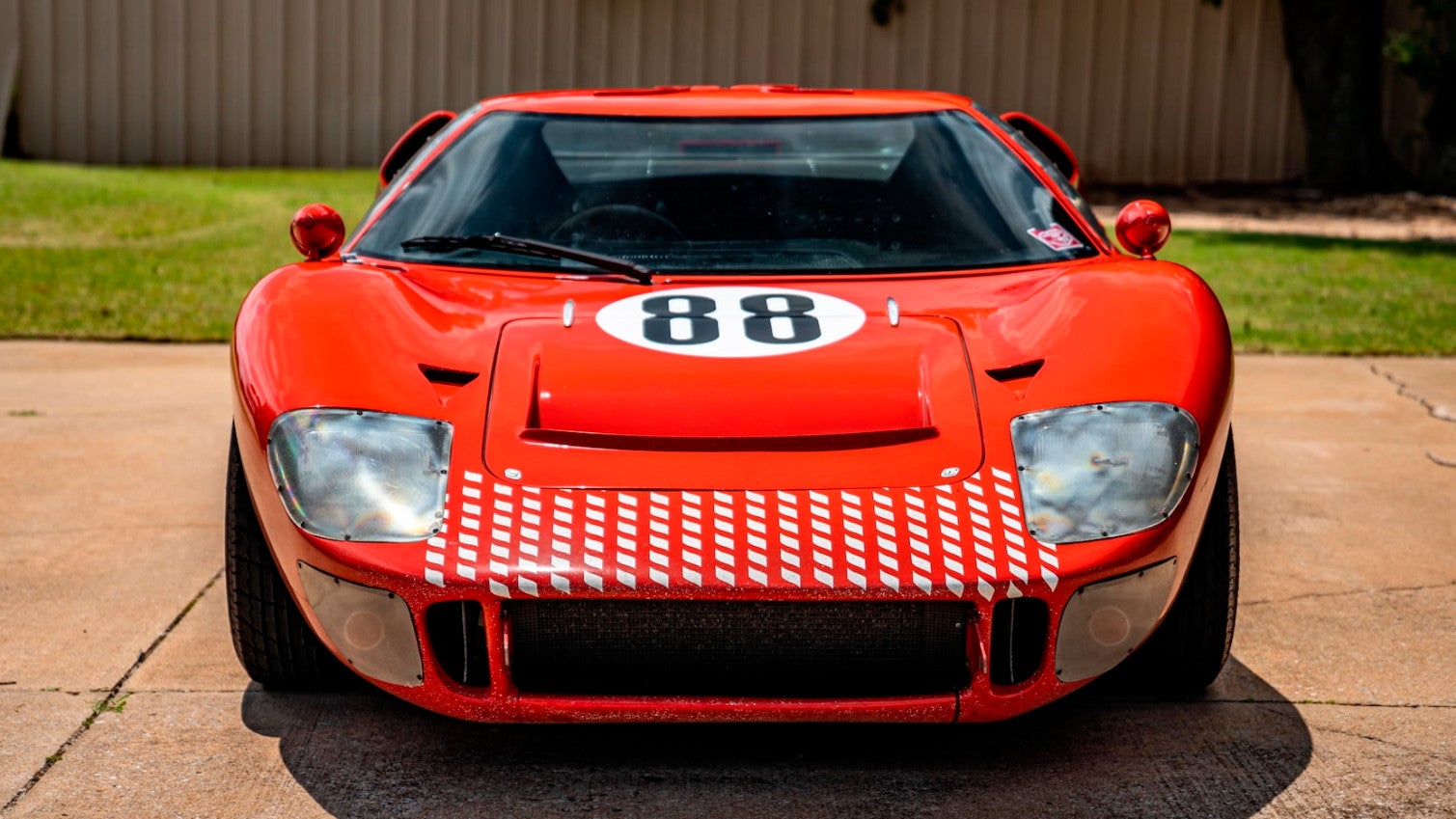 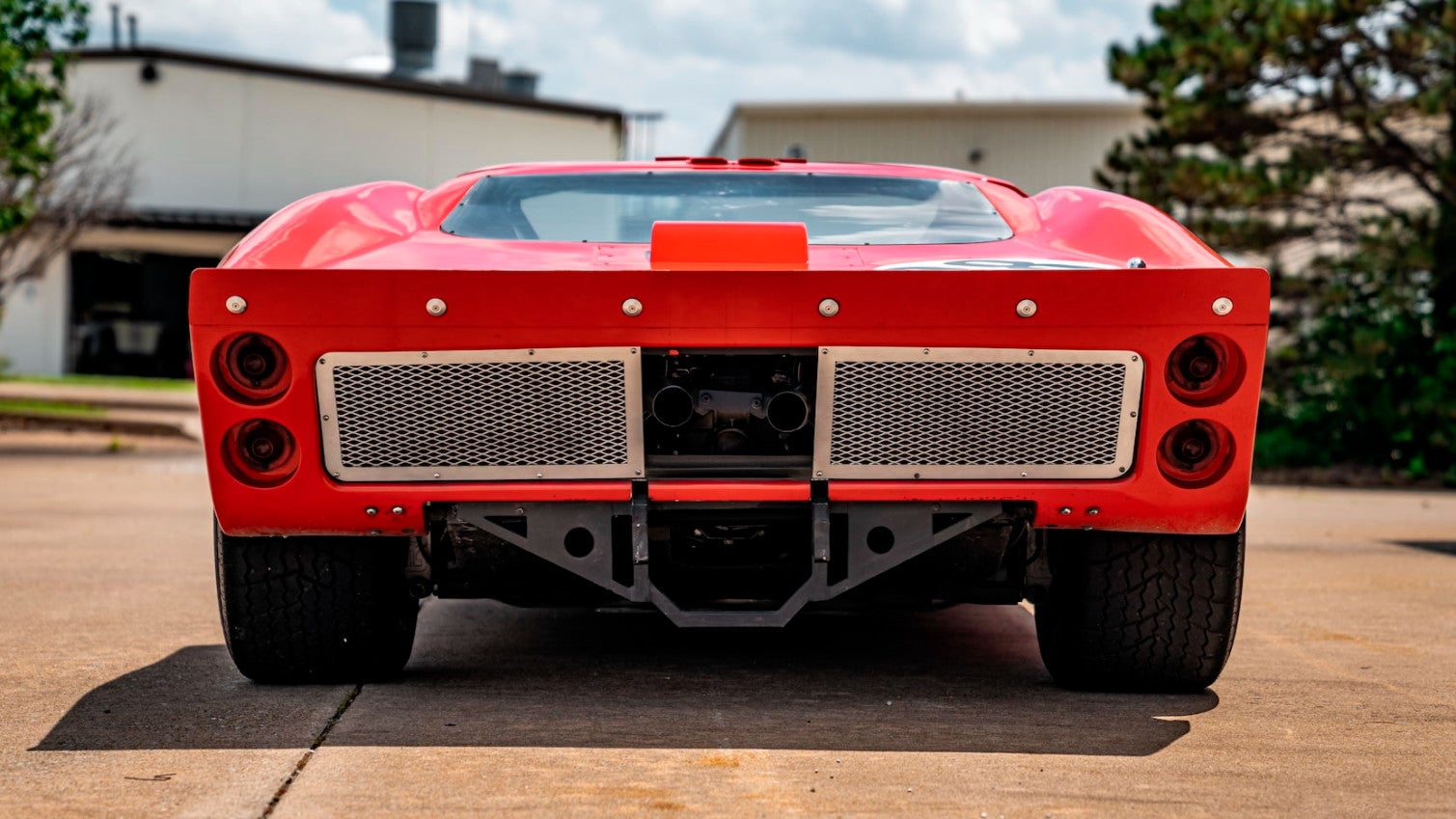 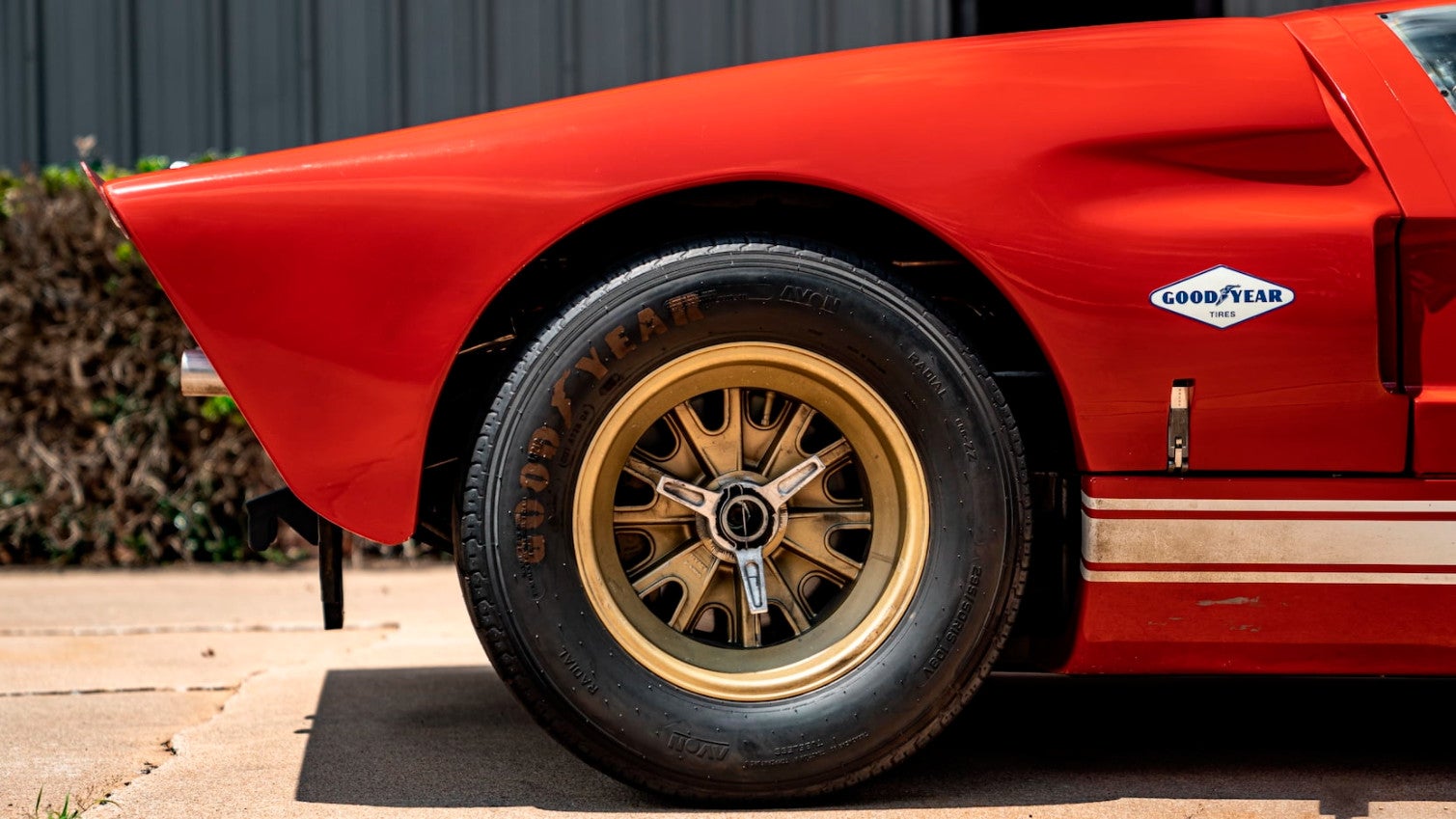 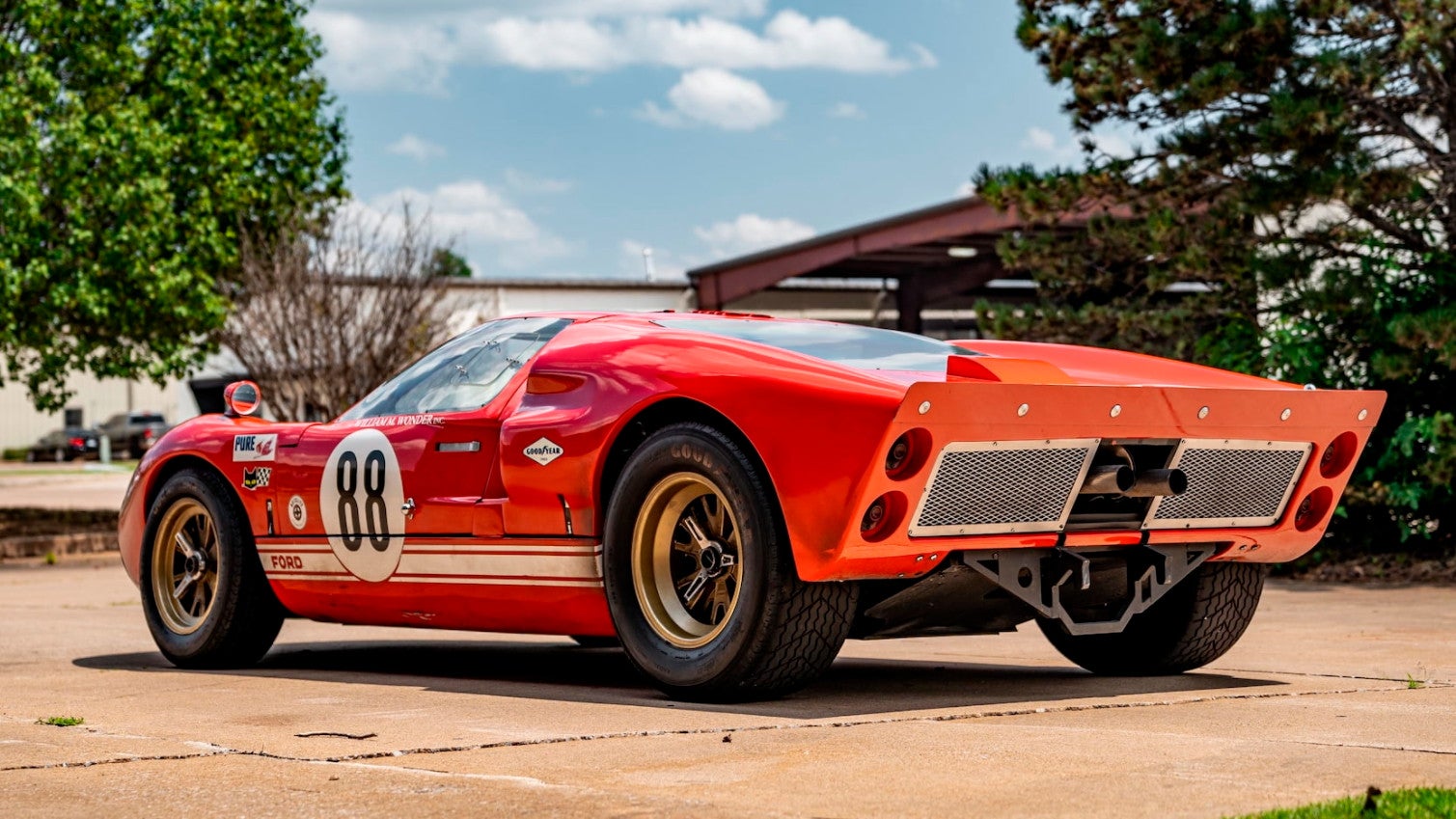 The overall story of the Ford GT40 is somewhat of a legend. Slighted after trying and failing to purchase Ferrari outright in the early 1960s, Ford leadership set about beating them in bold style at the 24 Hours of Le Mans. Based on the Lola Mk6, the GT40 packed a powerful Ford V8 in to a capable mid-engined chassis, and saw much success on the track. The car went on to win Le Mans four times running from 1966 to 1969, breaking Ferrari’s streak of five victories on the trot from 1960 to 1965.

The actual movie dispenses with exacting historical accuracy, but loosely follows the story of Carroll Shelby and driver Ken Miles as they seek to take Ford to victory at Le Mans. Much of the film deals with the supposedly difficult relationship between Miles and Ford executive Leo Beebe. It’s the classic tale of the guys in the overalls versus the suits, and director James Mangold tells it well.

There’s no price guide listed on the auction, and Race Car Replicas don’t list pricing for their kits, so what this sells for is anyone’s guess. We’d estimate it won’t go for quite as much as the Fast and Furious Supra, which sold for a full $500,000 back in June. In any case, if you want a Ford GT40 replica that’s ready to run, this could be a great opportunity to get one with a little history to boot. It’s also likely going to be far cheaper than a real one.