The CT4-V Blackwing wasn’t a foregone inevitability. It took 118 years for Cadillac to build it, with everything Cadillac has done leading to this moment in time where Cadillac offers a compact performance sedan with a manual transmission that not only competes with the best of the Germans, but is a genuine world-beater. That it arrives during the combustion engine’s closing chapter and the dawning of the EV age is bittersweet.

Everything that was good about the ATS-V is back to play an even stronger role in the CT4-V Blackwing, including the 3.6-liter twin-turbocharged ‘High Feature’ V6 with 8 extra horsepower (now 472) and the same torque (445 lb-ft), while the Tremec-built TR-6060 six-speed manual returns to back it up. Cadillac managed to keep all of the raw emotional stuff from its first effort while bringing the HiPo CT4 a level of refinement it desperately needed. There’s an updated and improved Alpha chassis underpinning the whole thing, and of course a better version of magnetic ride is there to keep it all smooth. That’s great, but the new CT4 interior also feels swank in a way that the Germans just don’t anymore.

There is a new Hydra-Matic 10L80 10-speed automatic available, but if you’re going to commit to buying the final volley in Cadillac’s internal combustion engine assault, why wouldn’t you allow yourself the pleasure of three pedals? After spending a day with the CT4-V Blackwing on the lovely winding roads of North Carolina and the high-speed monster known as Virginia International Raceway, I’m convinced nobody can—nor should they—make a reasonable case for the automatic. Whether you’re at a track day or heading to day care, you’ll appreciate the extra level of camaraderie with your car. Aside from the fact that you’re getting the most involved and dynamically engaging vehicle Cadillac has ever built, the manual-equipped cars get titanium connecting rods, and that’s just plain cool. 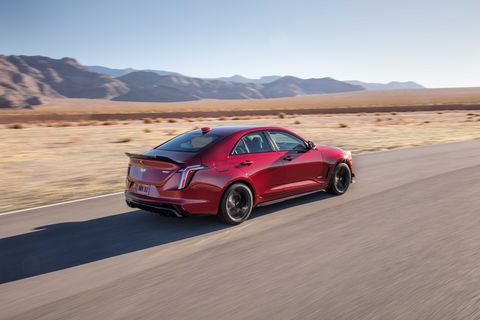 Rest assured, the CT4-V Blackwing is the absolute pinnacle of gasoline-powered Cadillacs. The crested brand from America’s mitten has come a long way from the days of the Catera. While the CT4-V Blackwing can trace its roots back to the Caddy That Zigs, nothing was done with half measures this time. Cadillacs has managed to build a truly competitive sporting machine. How did the company that was still building half-assed Northstar engines as recently as 10 years ago build something that genuinely competes with the traditional Euro sport sedan champs?

With an eye on the future, Cadillac didn’t spend hardly any time at all on the CT4-V Blackwing’s drivetrain. It was already quite good. Where the team did spend its time, however, was on key components of chassis, aerodynamics, and advanced ride control. These will clearly be pillars of the performance arm as the company transitions to battery-electric propulsion in the near term.

The Alpha chassis, first introduced back in 2013, was a godsend for Cadillac. That was already a relatively lightweight and lively platform from which to build. The formula was simple, MacPherson strut front and five-link rear independent suspension, longitudinal front-engine rear-drive. There’s no shame in cribbing your notes from the Germans you’re trying to beat, especially when the result is this good. For the new CT4, however, GM revamped the Alpha with strategic reinforcement to make it stiffer without significantly increasing the weight. The result is a car that weighs around 80 pounds more, but feels as though it’s hewn from a solid brick of granite.

If you want to get the most out of the CT4-V Blackwing on track, you’ll want to tick the boxes for the Carbon Fiber 1 and 2 packages. Those packs will net you a gorgeously woven carbon fiber reinforced plastic front splitter, and matching rocker panels, rear diffuser, and ducktail decklid spoiler. None of this comes cheaply, however, as the two packages combined will cost you seven thousand dollars. But with that obscenely expensive carbon you’ll be able to say you have the highest downforce street-going Cadillac ever, producing 169 pounds of downforce at the car’s 180 mph V-max. 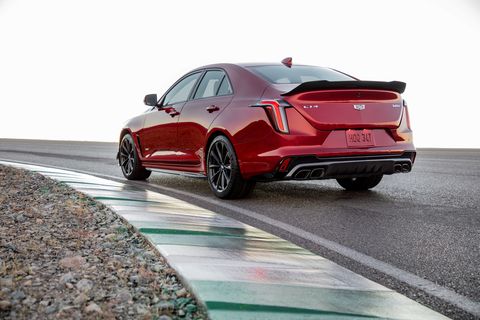 The big move forward, technologically speaking, is the new Magnetic Ride 4.0 system. This is a big deal. Cadillac pioneered the magnetorheological damper technology way back in 2002, and has been pushing this tech forward ever since. In this newest iteration, the CT4-V Blackwing adopts accelerometers at all four wheels for more precise control, a precise inertial measurement unit cribbed from aerospace engineering (and more recently adopted to motorcycle applications), further improvements to the magnetic damper fluid itself, and faster, better control software. Here the result is a damper that can change its attitude thousands of times per minute. As cars continue to get heavier with large low-slung battery packs, this tech may be the most important aspect of performance going forward.

So as the final gasoline-powered Cadillac V, what have we learned about the future of the brand’s performance arm? We already know that electric cars are hilariously quick, and whatever e-Blackwings may come won’t have a problem besting this car’s performance metrics. Perhaps more than anything the CT4-V Blackwing has taught us that Cadillac’s engineers know how to build a car that is more than some numbers on a page. If the electric performance Cadillacs of the near future have this car’s playfulness, connectedness, and restrained posh comfort, we’ll barely even miss these final days of gasoline-powered greatness.

Will these final internal combustion Cadillac V-Series cars become future collector’s items? Let us know your thoughts in the comments below.