I was doing a deep dive into the works of English architect Edwin Lutyens the other night (as one does) when I stumbled on an old picture of Nashdom, a very grand country home that served as an Anglican Benedictine abbey for a time. The photo, presumably from the early 1950s, gives you a sense of the home’s massive scale; in it, a man—likely a priest wearing a dark cassock—stands underneath Nashdom’s massive portico, talking to another man stepping out of a very intriguing little car.

Carspotting in old photos is like a bonus side-quest for those of us who are into both automotive and nonautomotive history. It’s usually fun! But this was one of those unsettling glitch-in-the-Matrix moments: The vehicle was strangely familiar, yet impossible to pin down. The grille looked like a postwar Austin’s, but its swoopy, slightly slabby sides, inboard headlights and skirted rear wheels instantly recalled a Jaguar XK120. To top it all off, it wore a woody wagon body.

What was that thing? Did the graphics engine rendering our likely simulated reality accidentally load two car files at once, creating a strangely compelling Jaguar/Austin chimaera? 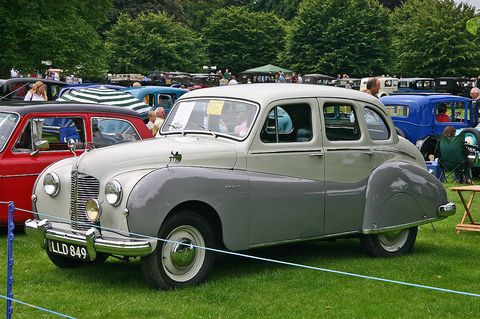 Short answer is no. Not this time, at least. It turns out the car is an Austin A70 Hampshire Countryman, built from 1948 to 1950. It’s probably the rarest of the Austin A70 variants, with fewer than 1,000 made. I don’t think I’ve ever seen one in person. There was also a pickup, built in small numbers, as well, and the more common four-door sedan. All were powered by a four-cylinder engine, and all have a distinctively XK120 look to them, at least below the belt line. (Actually, with the small round directional indicators on the front wings and the relatively wide grille, you could argue that parts of the A70 anticipate the XK140.)

But to me, the wagon has more of an XK120 feel to it, perhaps because unlike the sedan, the wooden body feels less integrated into the design as a whole; the upper half looks like it was dropped onto an unrelated design (like, say, a Jag). And in a way, it was—as with many woody wagons built on both sides of the Atlantic, the decision to build a niche “estate” version of the A70 using traditional coachbuilding techniques was driven by limited resources, not aesthetics.

In this case, Austin didn’t even do the work itself. In a bizarre you-can’t-make-this-up twist, the woody portion of the A70 Countryman was built by convalescing tuberculosis sufferers; the work was done by Papworth Industries, an enterprise set up by those recovering from the disease at what was, effectively, a TB colony. Austin established a relationship with the company when it was seeking a coachbuilder for a woody version of the postwar 16. 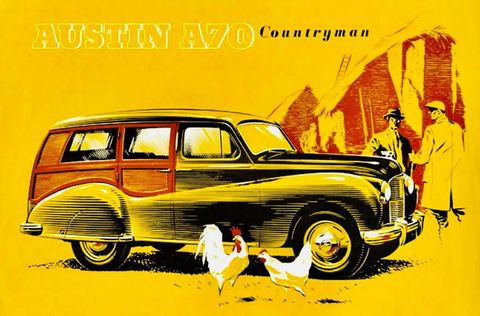 Despite a change of corporate ownership—and a distinct shift away from putting the sick to work—the luggage-making part of the Papworth organization persists to this day. Its products look nice; consider them next time you want to spend a few thousand bucks on an attache case.

The Countryman likewise survives to this day as a Mini model, though the path from there to here is far from straight: The A40 and A70 Countrymen inspired the Austin Mini Countryman (and the Morris Mini Traveller), which turned the famous Mini into a slightly longer wagon with side-by-side rear doors. It was built from 1960 to 1969; its wood trim was for decoration, not a part of its structure. I like the A70 Hampshire version the best out of all of them. It would be a great vehicle to have on the small farm I’d like to own some day. I’m not sure how useful it would be, but you can’t beat it for cuteness.

But the question remains: Did the A70 steal lines from William Lyons’ celebrated, revolutionary Jaguar XK120? Or, improbably, could it have been the other way around? 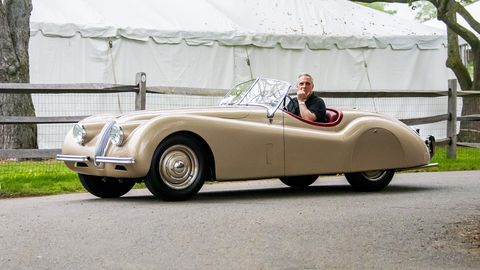 In Austin’s case, the swoopy fenders came courtesy of Argentinian designer Dick Burzi, who began working for the British company in 1929 after a stint at Lancia. The cues visible on the A70—especially the sweeping fender treatment—first emerged on the Austin A40 in 1947, a year before the XK120’s grand debut. But the A70’s styling took it a little further, turning front and rear fenders into one flowing, uninterrupted element and often setting it off with a two-tone paint job. It looks much more like the bottom half of a Jaguar than anything else Austin made before or after.

Given the XK120 and the A70 debuted in the same year, 1948, it’s hard to argue someone cribbed a design from someone else. It’s more likely yet another case of convergent evolution. The moment wouldn’t last for long: The A70 Hampshire was replaced by the larger, somewhat more bulbous A70 Hereford in 1950; these were built through 1954. Like the XK140 or XK150, the Hereford is an attractive enough vehicle, but some of the purity of the original was lost with the restyle. In particular, the A70 Hereford added a lot of visual business around the rear wheel arch (but this is coming from a guy who likes the look of skirted rear wheels).

In any case, the A70, while not a total flop, was not exactly a runaway success. Ultimately, very few of these special woody variants were built; apparently, just 901 Hampshire Countrymen, and 1,515 Hereford Countrymen, were produced in total between 1948 and 1954. Scant few have survived. So if you see one, consider yourself extremely lucky: You’re getting an alternate look at a world in which William Lyons decided to take his company in a decidedly more utilitarian direction—and turned to tubercular coachbuilders to make that vision a reality.