Now in its sixth generation, the Audi S4, along with its domesticated A4 sibling, is getting a midcycle refresh for 2020, one that keeps the familiar looks of the midsize sports sedan while introducing subtle tweaks to the design and tech inside.

The Audi S4, of course, is one of the three midgrade sports sedan gladiators hailing from Germany, representing a half step between the base sedans and their full performance variants. And over the decades the S4 has gotten very good at what it does. The nameplate dates back to the Audi 100-based Ur-S4 that debuted at the start of 1990s to pick a fight with angrier variants of BMW 3-Series and Mercedes C-Class sedans. As Audi sales picked up by the end of the decade in America, it quickly grew in popularity, despite S having less name recognition than M and AMG. This quickly changed as Audi grabbed a bigger slice of the performance sedan market in the early 2000s. 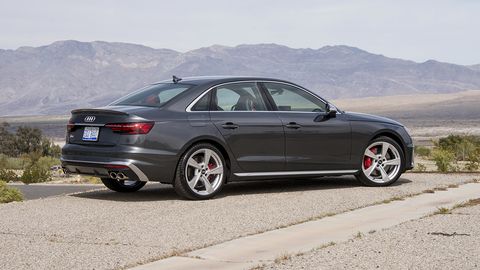 Following the debut of the current-generation S4 for the 2017 model year, Audi kept the changes subtle for 2020. In front, there’s a wider hexagonal grille, intakes with brushed aluminum frames and resculpted surface lines on the doors. Out back, the taillight pattern now features vertical stripes in place of the boomerang-shaped horizontal lines and a tweaked rear bumper, along with a few other details.

In fact, just about every S4 body panel has been tweaked in this refresh. But the most obvious giveaway that you’re looking at a 2020 model will be the more complex air intakes below the revised headlights. Those who watch Audi design closely will also notice lines extending from the front and rear lights to just above the edges of the door handles, when viewing the car in profile. This replaces the single creased line that traveled the entire length of the car.

The S4 powertrain is staying the same with this redesign, so Audi fans can breathe a sigh of relief—no downsizing is happening, at least for the moment. The S4 is powered by a turbocharged 3.0-liter TFSI V6 producing 349 hp and 369 lb-ft of torque, good for sprints from 0-60 mph in just 4.4 seconds. This engine is paired with an eight-speed Tiptronic automatic transmission—the sole transmission on the S4 menu. There is no manual option simply because the demand just isn’t there anymore, even when it comes to models like the S4.

While the exterior tweaks are subtle in this refresh, the more readily-felt changes concern the tech inside. A new 10.1-inch display sits atop the S4’s center stack, and now it’s controlled by touch rather than a rotary knob on the console. That’s right: If you weren’t a fan of the cold Germanic knob, you can now reach out and … touch something. Not only that, but the screen makes a pleasant clicking sound every time you punch a button, like on Star Trek-style interfaces, and it responds far faster than the outgoing system, with its 8.3-inch screen, ever did.

Most of the S4’s recipe still depends on the hardware underneath, no matter how much quicker the new infotainment system happens to be. To that end, the S sport package offers a quattro sport rear differential, S tuned adaptive damping suspension and red-painted brake calipers. Additionally, you get dynamic steering that varies the response based on the speed of the car, offering a bit of help in slow maneuvering but firming up the response at high speeds.

Staying true to its German character, it stays self-assured and dispassionate. The S4 offers confident handling along the twisty mountain roads near Palm Springs, California, with a shrug and not much drama. That’s where I tried out the freshly updated S4 in its various driving modes and found that the 2020 model remains faithful to its roots while offering plenty of comfort, yet keeps its distance from the techno-terror that is the Audi RS4.

Ingolstadt is fond of understated, businesslike designs, and for decades this quality has filtered down to the engineering, as well. The S4 has resisted the urge to go wild and remains a Q-ship among the German sports sedan trio, only standing out with a honeycomb grille and red-colored calipers. This trend is even truer on the inside, as Audi has kept the cabin as close to the look of its buttoned up A4 sibling as possible, to the point of straying dangerously close to the interior look of a Volkswagen van of some kind. Just about everything about the S4 is quiet and understated.

But not the performance, thankfully. You can summon that quite easily once traffic clears and mountain roads on the horizon beckon. While the S4 can be quite docile in town, after a couple of taps on the screen to switch driving modes, the S4 comes alive and offers those who have just escaped the office the opportunity to attack narrow hairpin turns with confidence, all while playing something appropriately German on the speakers. But the S4’s exhaust soundtrack is worth listening to, especially in dynamic mode. Even if the cabin keeps some of the engine noise out, the exhaust system delivers a satisfying sound.

Perhaps betraying the fact that it knows its audience very well by know, the S4 is a very able car to drive impatiently, such as when you’re stuck behind camper trailers plodding along at 10 mph below the limit. Overtaking in the oncoming lane with plenty of confidence is easy enough once traffic conditions permit. And quattro all-wheel drive keeps the S4 firmly planted even on broken pavement covered in fine gravel. Perhaps this is where Audi S4 drivers get their reputation, by overtaking several camper buses at a time? This is where stereotypes start, as BMW owners know all too well.

But the S4 can temper itself a bit in comfort mode without losing too much grunt. Once aggravating campers are long gone in the rearview mirror, you settle back into a buttoned-up German midsize sedan with a forgiving suspension. Yes, Audi learned how to make the suspension in its sportier cars easy to live with on a daily basis, in case the path to your office and back doesn’t snake through the freshly paved roads in the mountains above Palm Springs. Part of this is due to the fact that wheel size has not ballooned to serve looks in the S4. And because Audi still wants to keep the hard-edged driving experience for the RS4. This makes the S4 an easier upgrade for those looking for something just beyond the standard A4 sedan. Its engine performance and suspension tuning is different enough to warrant the hop in price.

Inevitably, the cars that the S4 will be compared to in most reviews are the BMW M340i and the Mercedes-AMG C43. All three of these have turbocharged six-cylinder engines underhood displacing 3.0 liters, as the genre has mandated for some time. And all three are those halfway steps to the full performance machines from their respective German automakers. This makes them easy to compare on paper, if not in spirit or road manners. Despite German automakers’ efforts to target each other directly, the three sedans still manage to deliver very different driving experiences. And each one has developed its own audience that doesn’t really abandon one model for another—there are very few defectors. 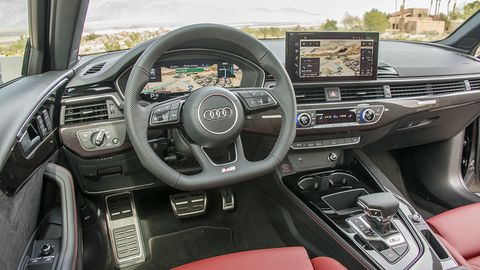 Just where does the S4 fit into this picture?

Its niche in this trio is still remarkably close to where it was 20 years ago: The S4 delivers a somewhat cold but capable experience, underscored by the minimalist cabin. It doesn’t feel as light-footed and nimble as the BMW 3-Series. And it doesn’t feel weighed down by all the hardware and luxury toys of the C-Class. Those who live by nothing but the numbers already know that the S4 has corralled fewer horses into its engine bay compared to its two competitors from Deutschland, but all three still land within fractions of a second of each other when it comes to acceleration times.

But buyers of these cars don’t live by the numbers. If you liked the S4 20 years ago, odds are you’ll still be itching for a new S4 today.