If you think that Scuderia Cameron Glickenhaus (SCG) is all about supercars and racing, then you haven’t been paying attention. The company is contending the famous 24 Hours this year with its Le Mans Hypercar, but the Sleepy Hollow, New York-based boutique manufacturer also builds the $258,750 SCG Boot, a no-compromises Baja 1000 endurance racer (with Steve McQueen roots) that is also road-legal. And now it’s planning to contest that grueling annual Mexican race with its own zero-emission hydrogen vehicle, the product of a collaboration with First Mode. Beyond that, SCG envisions offering long-range workhorse fuel-cell trucks for fleet use—and has seen a fair amount of interest.

No electric contender has finished the Baja 1000. Lordstown Motors, builders of a forthcoming electric pickup with hub motors, contended the 2021 San Felipe 250 in the Baja peninsula, but stopped around mile marker 40.

SCG’s target is the November 2022 Baja, and that means the fast track on a full-scale engineering collaboration to produce a custom racer chassis with First Mode’s integration of a yet-to-be-determined fuel cell with a tank and fueling system. Highly pressurized or cryogenic (i.e., very cold) liquid hydrogen? The team doesn’t know yet. 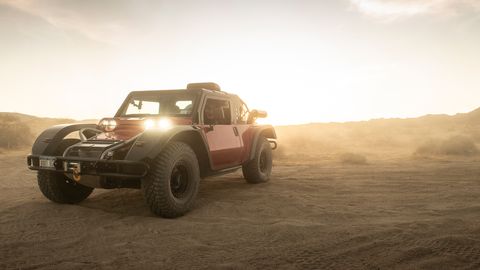 Jim Glickenhaus is the charismatic and exacting Ferrari collector, businessman and film producer who started SCG. Jesse Glickenhaus is his son, and managing director of the business. Chris Voorhees is president and chief engineer at First Mode. Together, they’ll have to figure out how to make a fuel cell (dependent on extremely pure hydrogen) work reliably in one of the world’s most grueling—and dirty—race environments. The Baja is very hot during the day, cold at night, and entrants have to withstand big g-forces.

“If it can race in the Baja, it’s good enough for fleet operators.”

“We develop technology projects that span the confluence of three areas—extreme environments, mobility platforms, and the adoption of clean power and energy,” said Voorhees. “We work on space systems, mining and metals, and industrial decarbonization—not low-hanging-fruit applications. Our current project is developing a fuel-cell system for a 300-ton haul truck to be used at an Anglo American platinum mine in South Africa.” 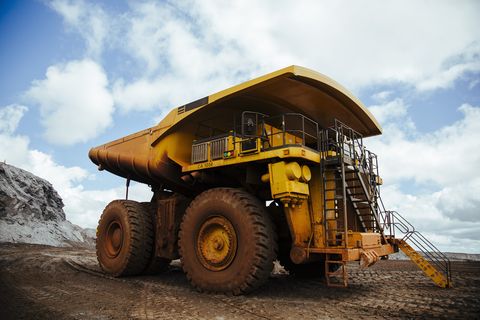 In other words, a company whose motto is “from problem to prototype” is perfect for the Baja job, with an extreme environment meeting a challenging mobility platform. “We’re going to start with a ridiculous use case and find out what works in the real world,” Jesse Glickenhaus said. “If it can race in the Baja, it’s good enough for fleet operators. When we started talking about racing with hydrogen, some of those companies sought us out to talk about developing a truck—and we can beat others to the market.”

SCG has been meeting with major suppliers of both fuel cells and tanks. “The biggest companies in the world make fuel cells,” Glickenhaus said. “We’ve been talking to all the majors.”

There are at least eight battery electric pickups in development, including Tesla’s Cybertruck and the Ford F-150 Lightning, but Glickenhaus doesn’t think they’ll be up to the task. “I would short them all,” he said. “In New England, for instance, battery vehicles don’t really work. My Tesla loses a lot of range in the winter.”

The fact that Elon Musk routinely derides what he calls “fool cells” is a motivator for SCG, which challenged him to compete in Baja against the hydrogen vehicle. “Bring it,” tweeted Jim Glickenhaus. 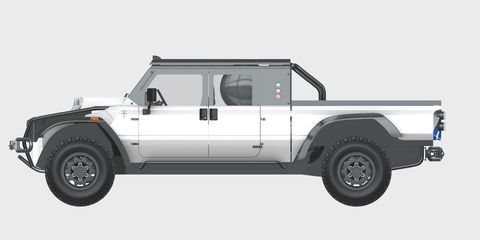 The path to commercializing hydrogen cars is daunting, though. They’re expensive to build, and each fueling station is $1 to $2 million. Nikola’s plans to build fuel-cell long-range trucks with General Motors as a partner are in total disarray after a damning report on the company’s operations. Automakers including Toyota, Honda, and Hyundai are selling fuel-cell cars, but there’s no real U.S. infrastructure outside California. Still, Glickenhaus thinks the trucks can work for fleets around the U.S., with a centralized and dedicated refueling point. Swappable tanks are also an option, he said.

“We think we can run the Baja and be competitive.”

Fuel-cell trucks are a cause for the Washington-based Fuel Cell and Hydrogen Energy Association. Its president, Morry Markowitz, tells Autoweek, “Fuel-cell technology and hydrogen energy will be an integral component of meeting the country’s future transportation needs. Its ability to achieve long range and fast refueling times with zero emissions is part of a solution to decarbonize the light-, medium-, and heavy-duty truck sectors.”

A likely scenario, Glickenhaus said, is a deal with a major fleet operator for a pilot program that will provide maybe four vehicles to be tested in actual work conditions over six months.

For the racer, Voorhees said its challenge will be bringing the power generation and energy systems together and integrated into SCG’s platform—system integration as well as refueling. “We have to develop a pit strategy, determining how much energy to store on board versus the penalty of refueling,” he said. “But we think we can run the Baja and be competitive.”

Voorhees acknowledges that there’s “nothing better than petrol” for refueling in race situations. “If it didn’t destroy the earth it would be awesome,” he said. The South African project will generate “green hydrogen” on site using a solar-powered electrolyzer.

The hydrogen contender will be “like a pickup version of the Boot,” Glickenhaus said. So far it’s a drawing, and a fuel-cell supplier has to be selected for the integration work to begin. A lot of extremely challenging work lies ahead. “But that’s why we decided to work with First Mode,” Glickenhaus said.

Share your thoughts on SCG tackling the Baja 1000 with a fuel-cell truck in the comments below.