Regular commuter cars tend to lead busy lives, racking up miles by the tens of thousands and being passed from owner to owner until they finally become too expensive to keep on the road or simply die entirely. Supercars and other luxury vehicles, though, are often only brought out on special occasions, and some end up left sitting for years, deteriorating all the while. This video from Larry Kosilla at AMMO NYC shows just how bad a Lamborghini can get when it’s left sitting for two whole decades.

The car in question is a 1985 Lamborghini Countach 5000s, originally delivered to its owner in Rome, Italy. The Euro-spec car was a two-valve carbureted model, had no wing, and originally cost around $99,500 when new. Of 321 examples built, only around 50 made it to the USA.

The car came to Kosilla and AMMO NYC from Curated, a company specializing in restoring and trading vintage supercars. The Countach was found in Connecticut very much in barn find condition, with the owner Tony sharing a full folder of photos showing his history with his much-loved car.

When the team showed up to recover the car from the garage in which it had sat for 20 years, the engine cover and a later-fitted wing were off the car, and the Countach was covered in a thick layer of dust and mouse droppings. The tired supercar also came with bags of spare parts for a rebuild effort that never quite got off the ground, leaving some hints as to how the car sat for so long. Complete with dirty old towels in the trunk, and plenty of evidence of animal infestation, the car was sitting on its original Pirelli P7s tires with the keys still in the ignition.

Once trailed back and under the lights at AMMO NYC, filth and grime was visible in every crack and crevice of the car. Mouse droppings were found throughout the interior and the trunk, with plenty of spiderwebs to boot.

Using a tiny inspection camera, Kosilla found plenty of acorns and mouse droppings in the car’s frame and engine bay, along with a whole lotta animal urine, too. He makes special notes of the “highways” throughout the car where rodents could be seen to have regularly paced back and forth, tracking dirt and their own waste all over the vehicle. All of this had to be scrubbed, steam cleaned and disinfected before the car could be handed off to mechanics for restoration. 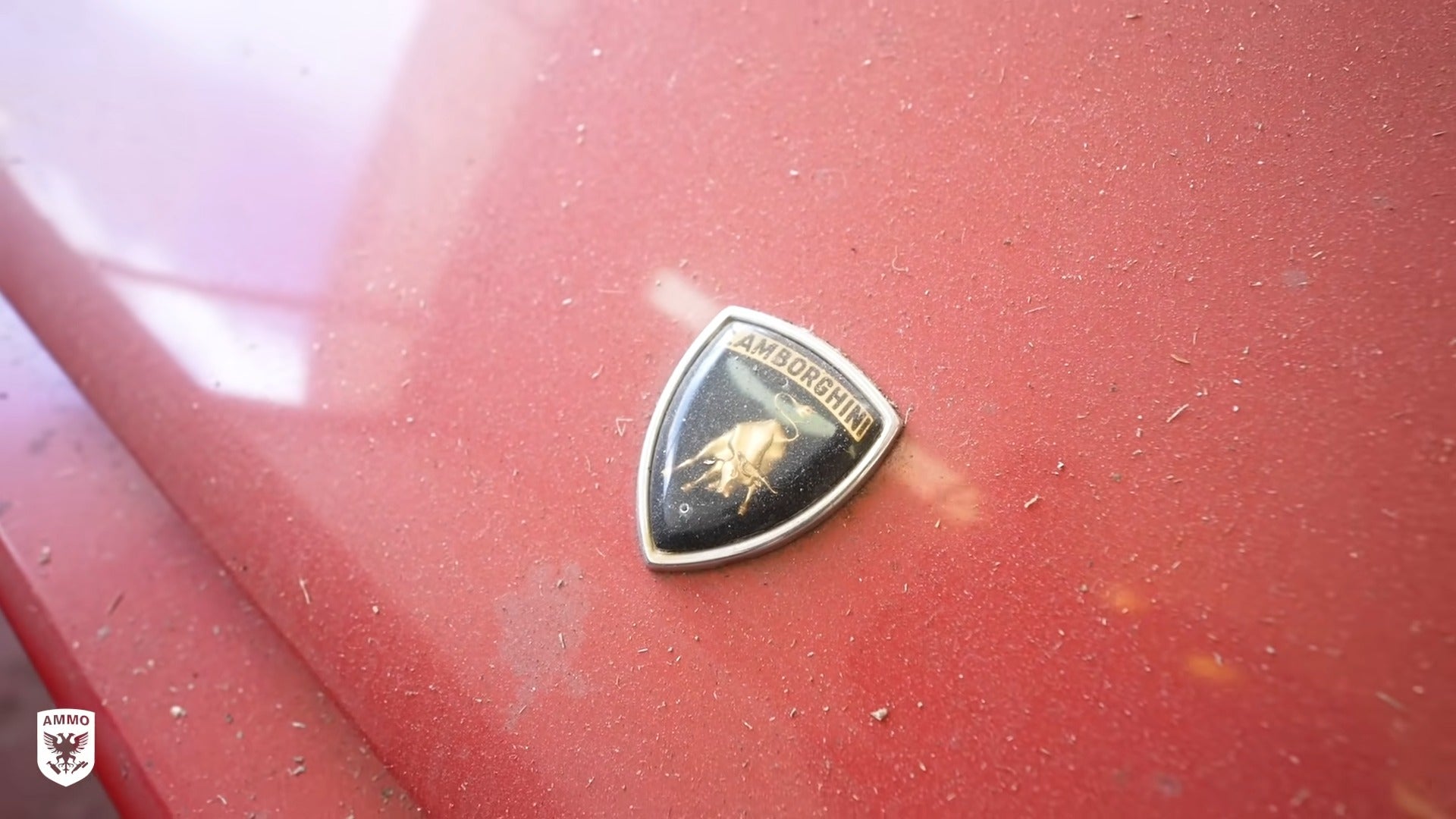 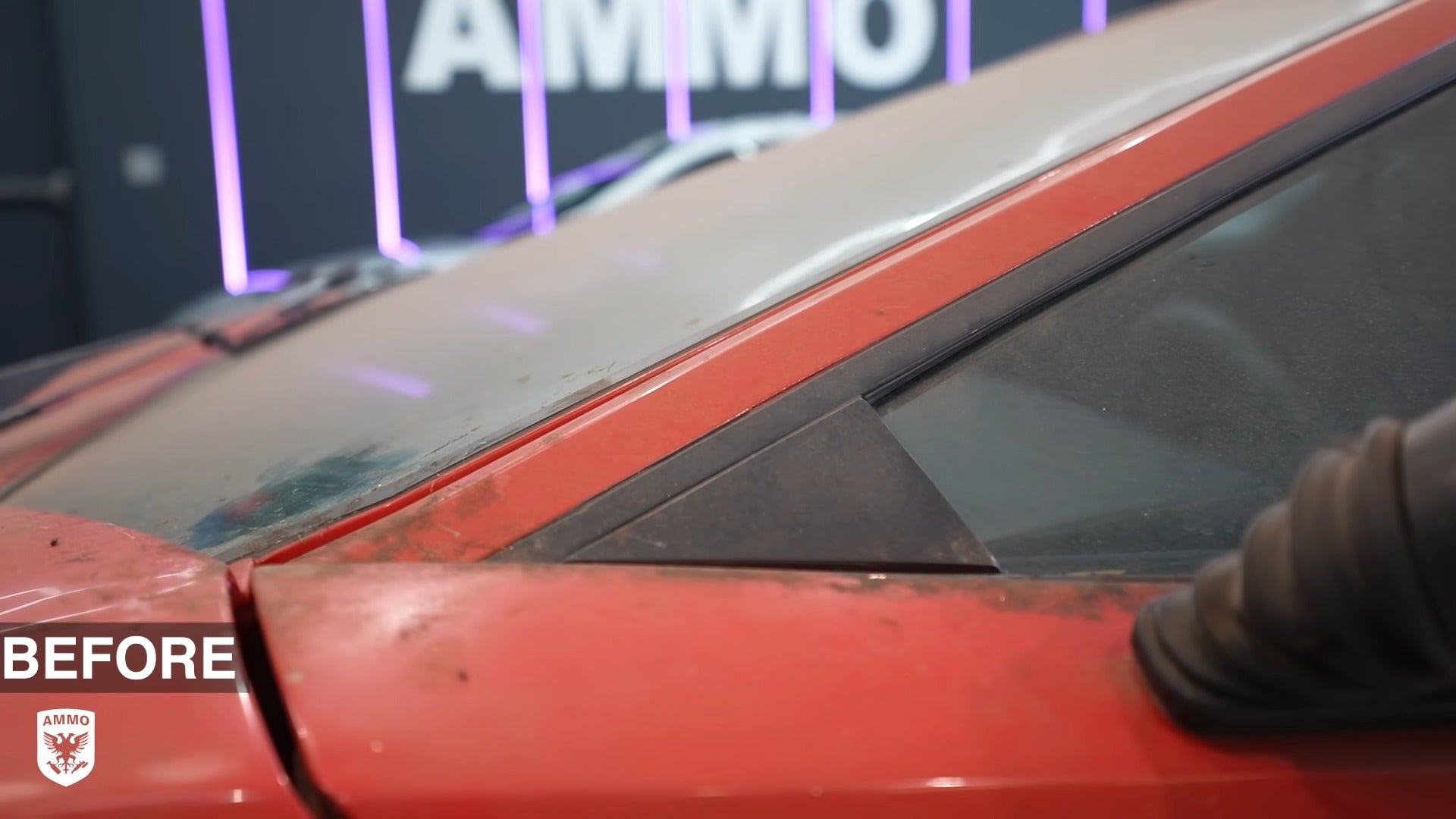 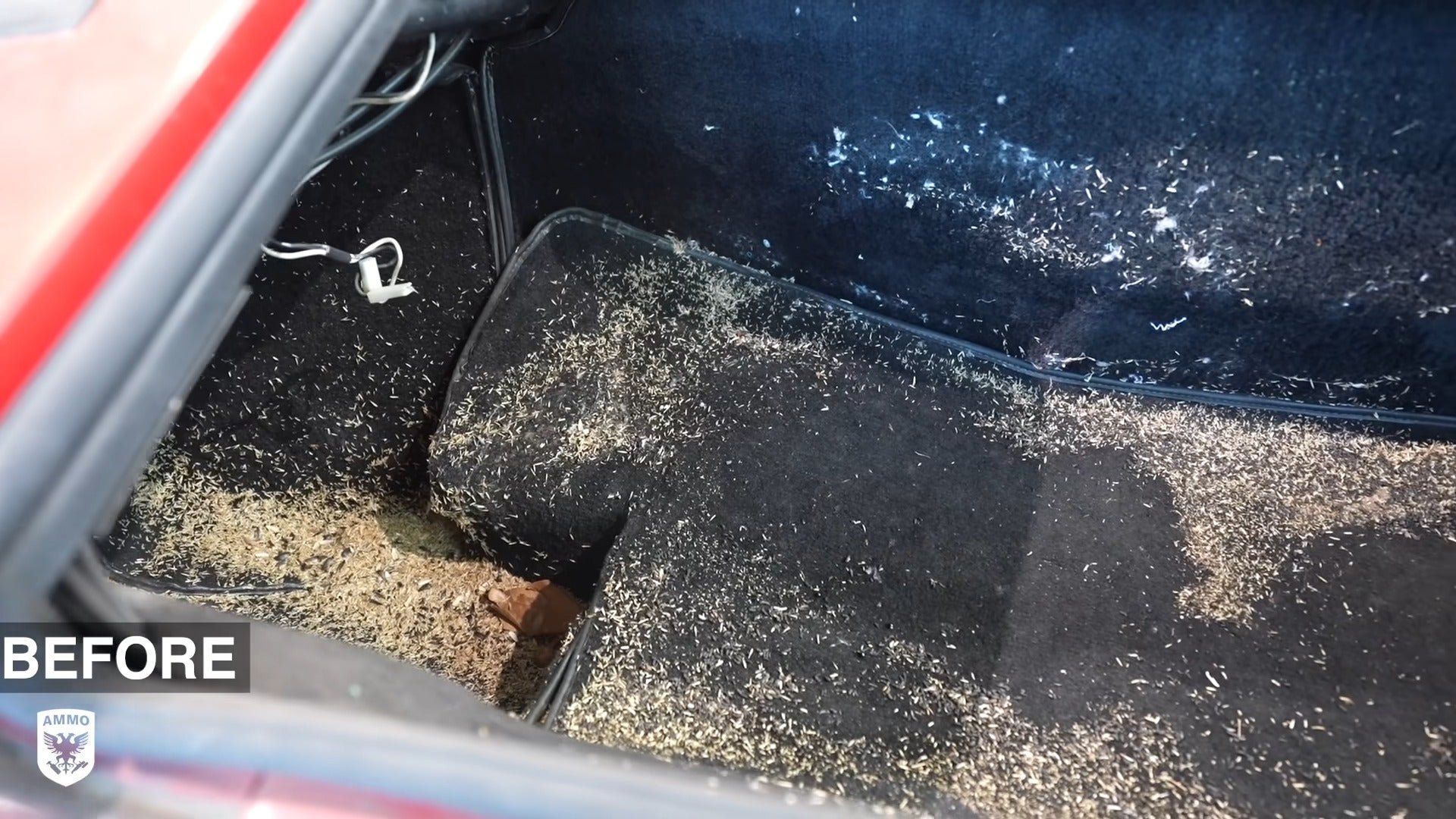 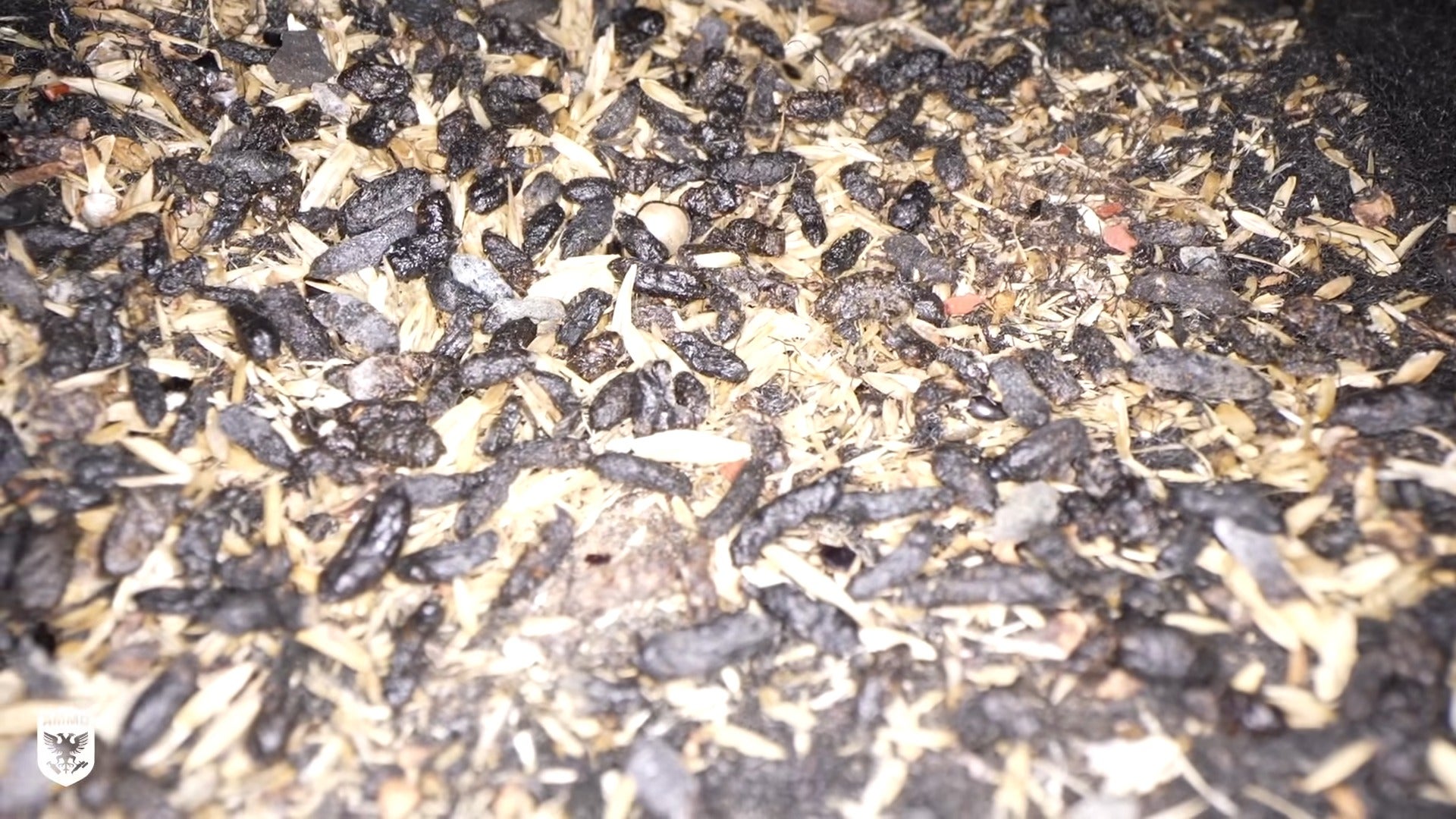 The car was first given a serious powerwash and foam treatment to remove the bulk of the dust and grime and let the chemicals start eating away at the worst of the detritus. Amazingly, only one small leak was found in all the Lamborghini’s body seals, likely as the car lived inside over the last two decades.

From there, paint measurements showed plenty of inconsistency in the thickness of the finish, which can be a sign of a non-original paint job. However, in the case of a low-run, hand-built Italian supercar from the 1980s, it’s actually a sign that the car does still have its original paint, as these vehicles were painted by hand, not machines, back then.

After a few trials, the right combination of foam pad and polish was found to give the absolute best results. Polishing brought a quick and drastic improvement to the paint on the car, with the single-stage coating coming back up to a rich shine. 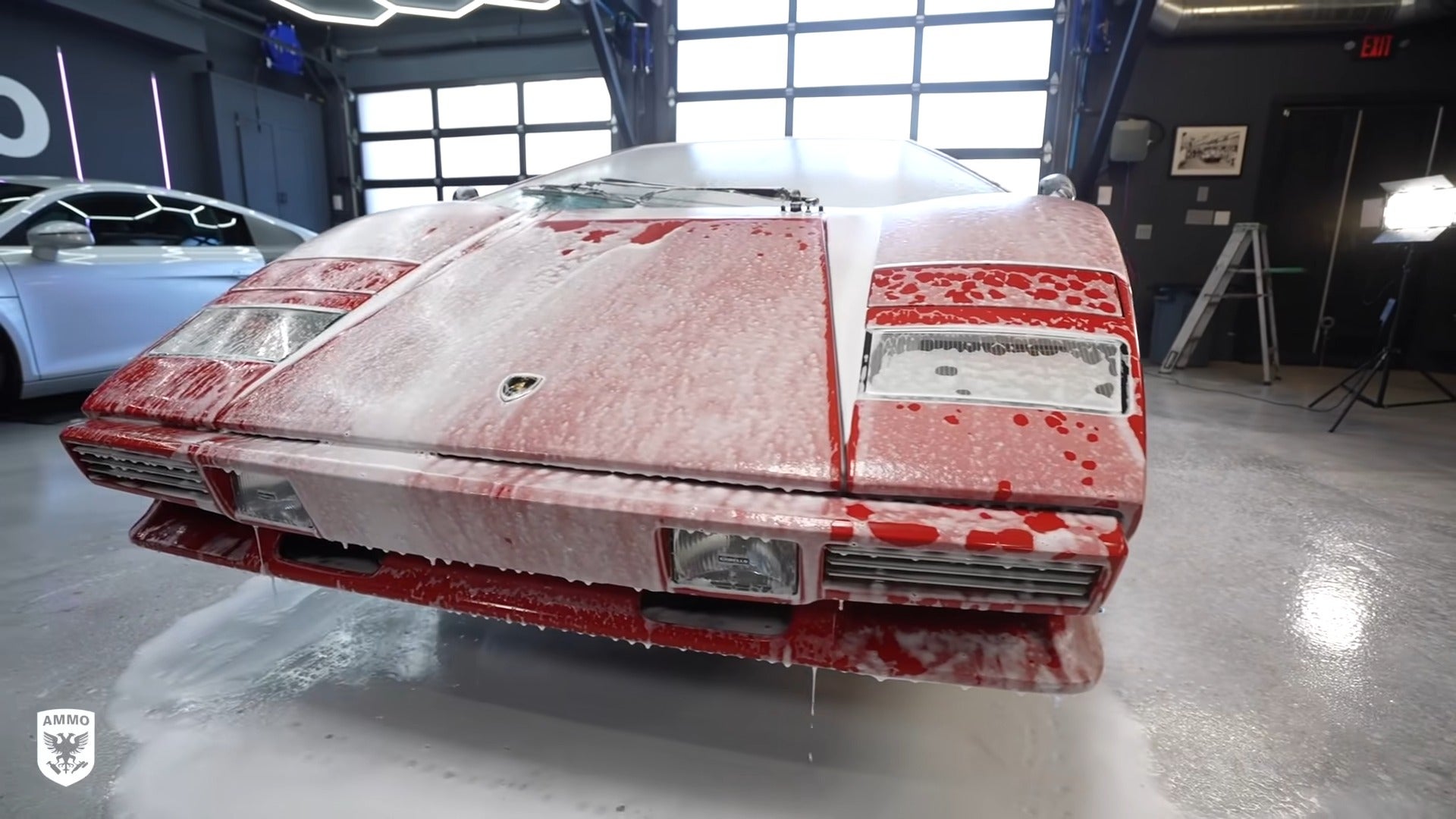 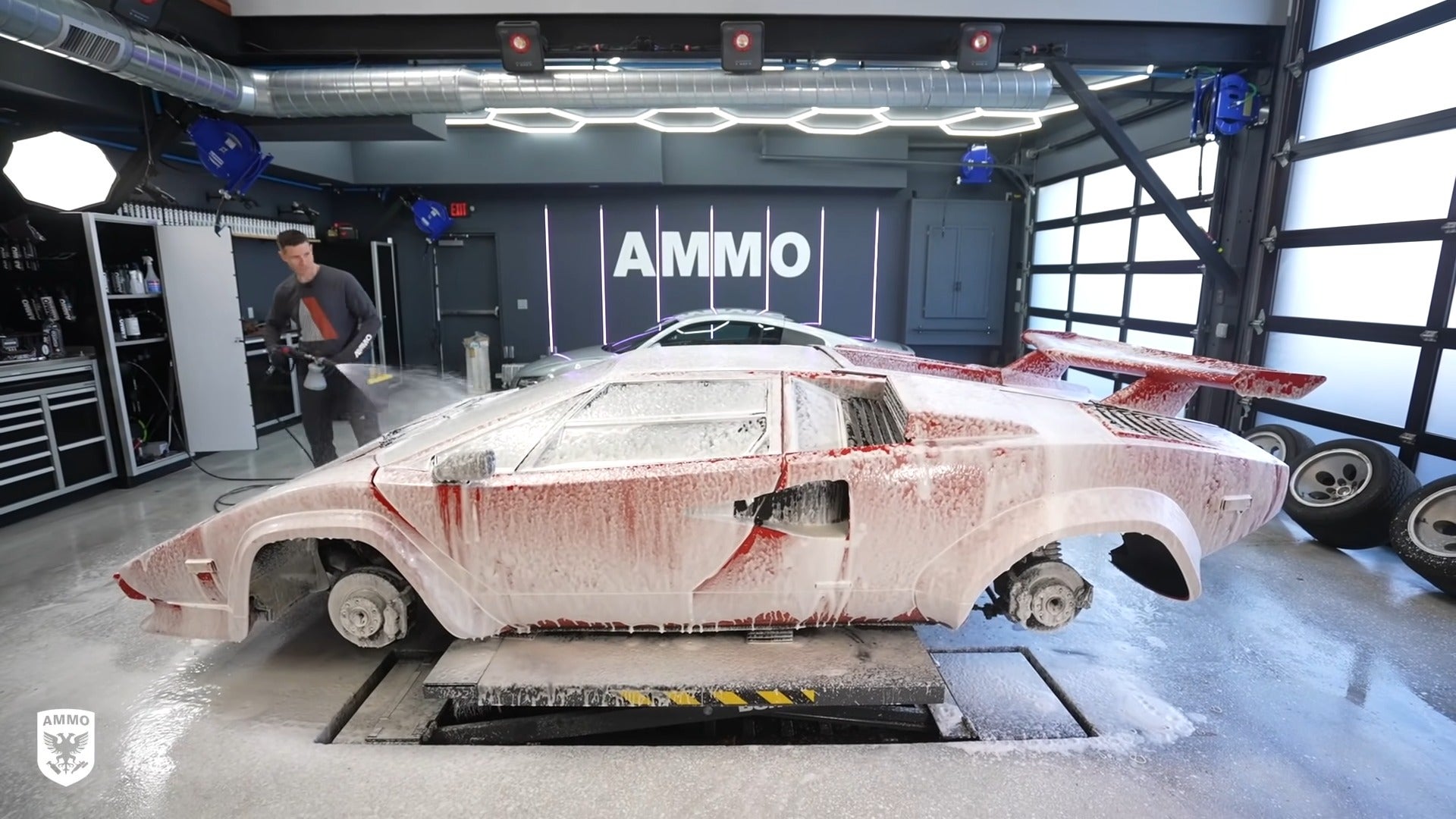 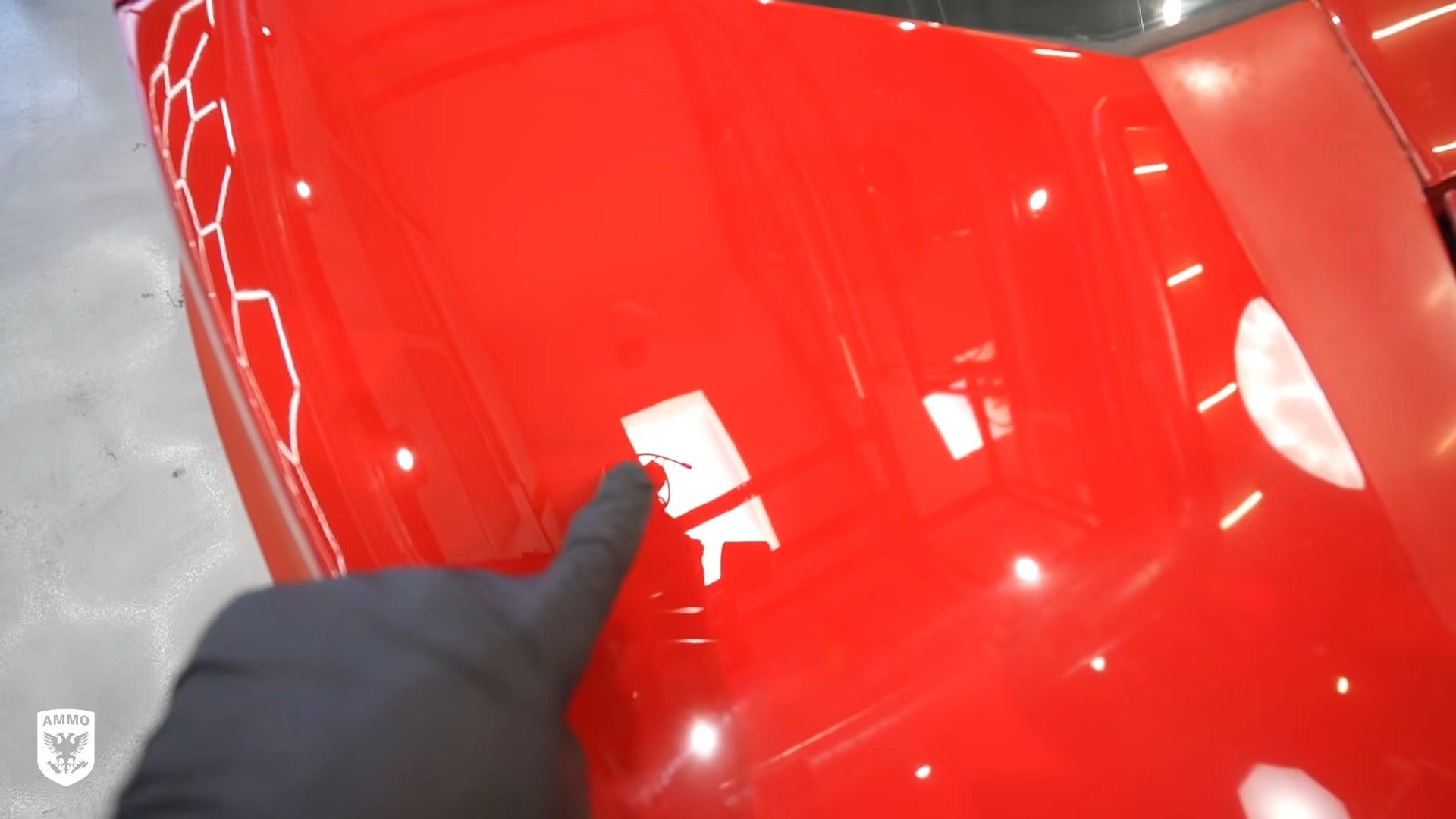 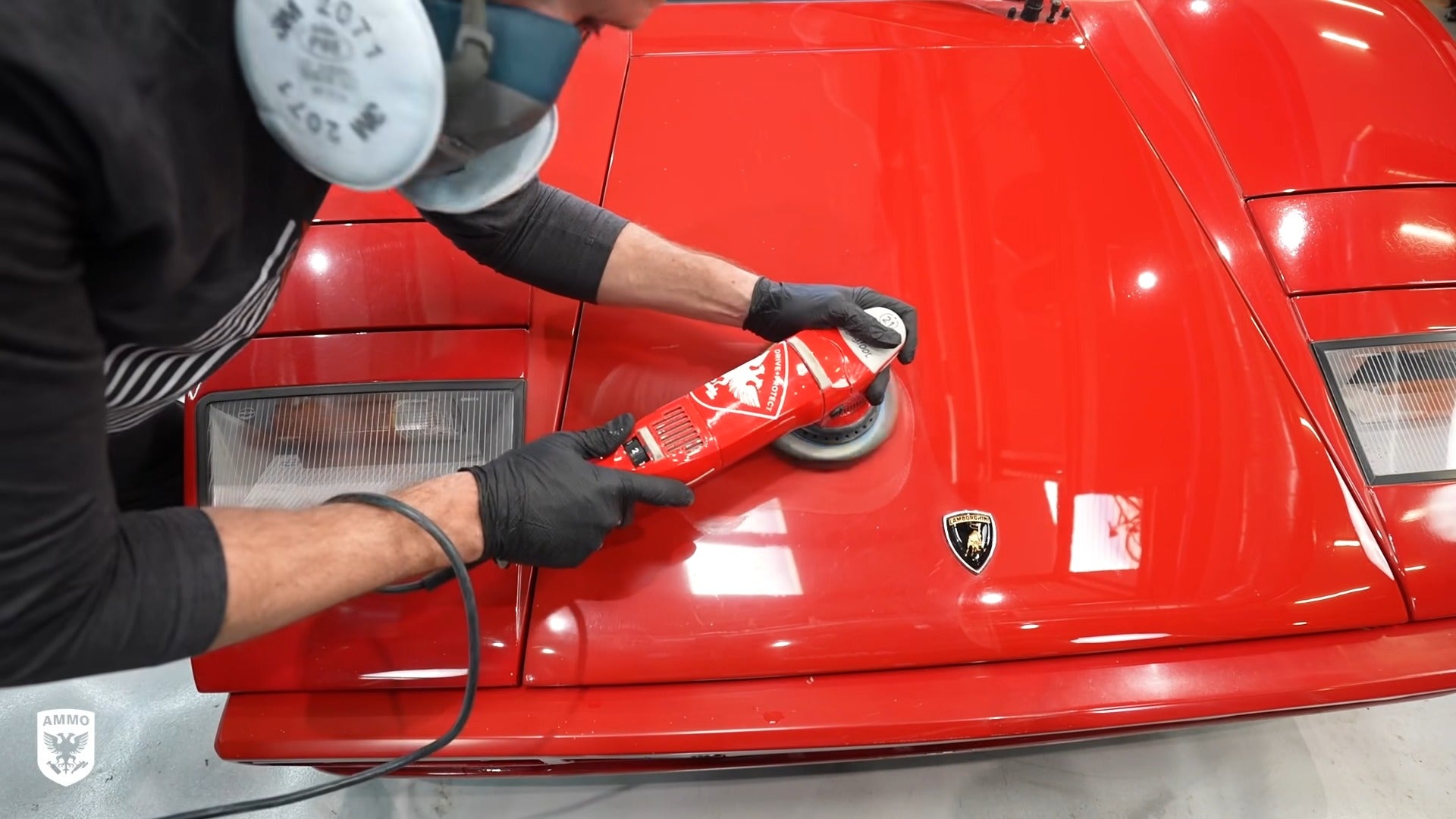 As for the engine bay, Kosilla busted out a custom tool he’d developed that consists of a bottle which pumps pressurized foam through a woolly brush so he can apply fresh product as he’s scrubbing. It helps clean the engine bay without having to keep pulling out the brush to clean it off.

Kosilla’s approach is all-encompassing; even the undercarriage, wheel wells, and exhaust pipes get plenty of attention. Given the car is to be fully restored, it’s a big help to the mechanics doing the work if the entire Countach is filth-free. The underside of the vehicle was sprayed down and cleaned to remove as much urine and animal matter as possible.

The interior suffered, too, full of mold growth and more mouse droppings that made it a serious hazard to sit inside. Floor mats were pulled out, and vacuuming was the first step to the cleaning process. The initial cleanup turned up treats like a matchbook from a strip club, as well as a pair of jeans soaked in mouse urine with a mouse nest as the disgusting icing on the turd cake. 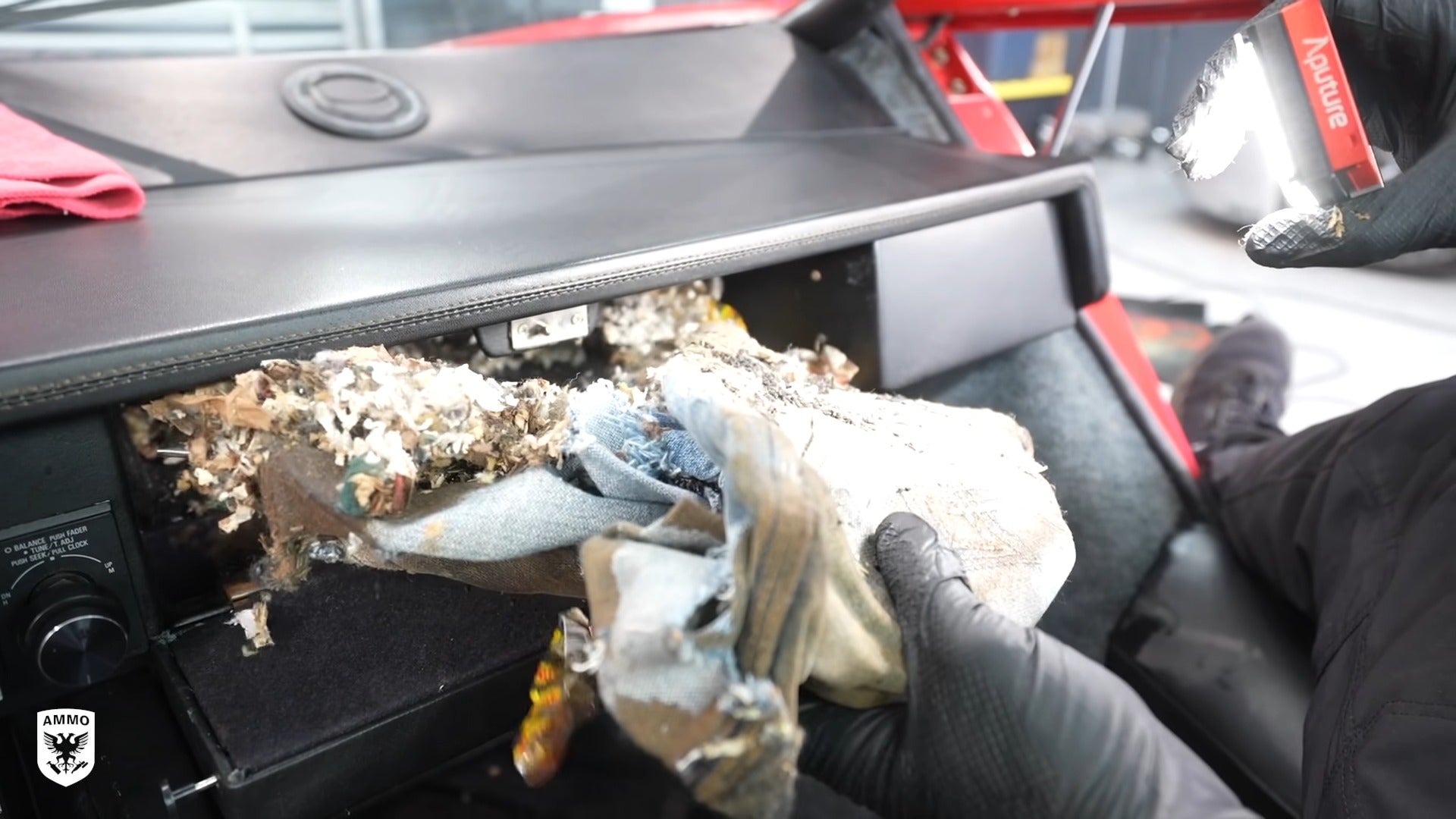 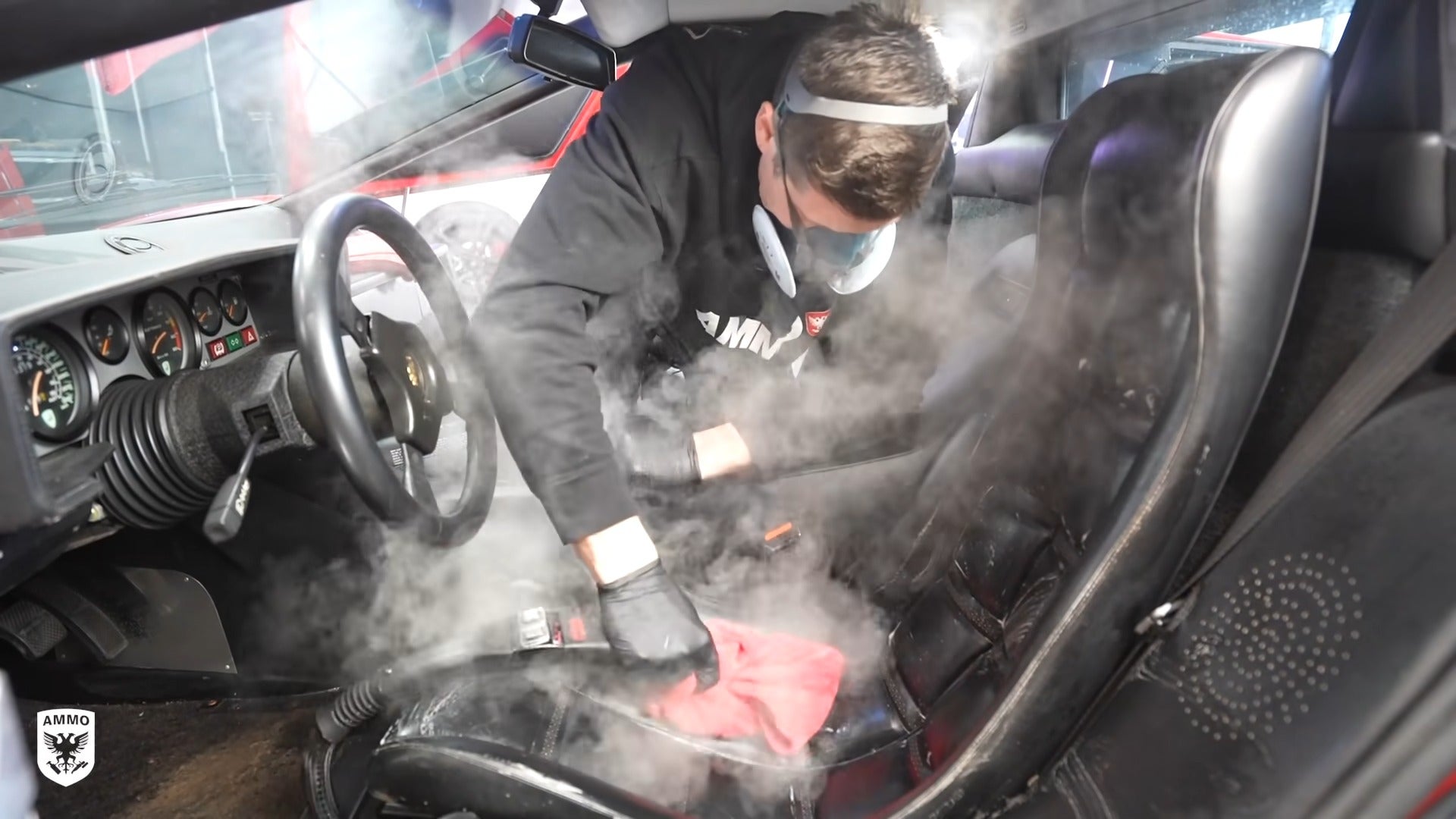 Once the particulate material was removed, an enzyme cleaner was used to break down all the organic matter to remove any toxic smells from the carpets. Steam cleaning and more interior products helped remove the mold and organic matter. Kosilla notes that it’s important to regularly clean your brushes and towels when working with a biologically contaminated interior like this to prevent spreading bacteria and other nasties around the cabin.

With that done, final steps involved giving the glass a clean, and applying products to blacken up the tires and restore some of the plastic trim. These parts are particularly vulnerable to fading from sun damage, but come up a treat with the right treatment. 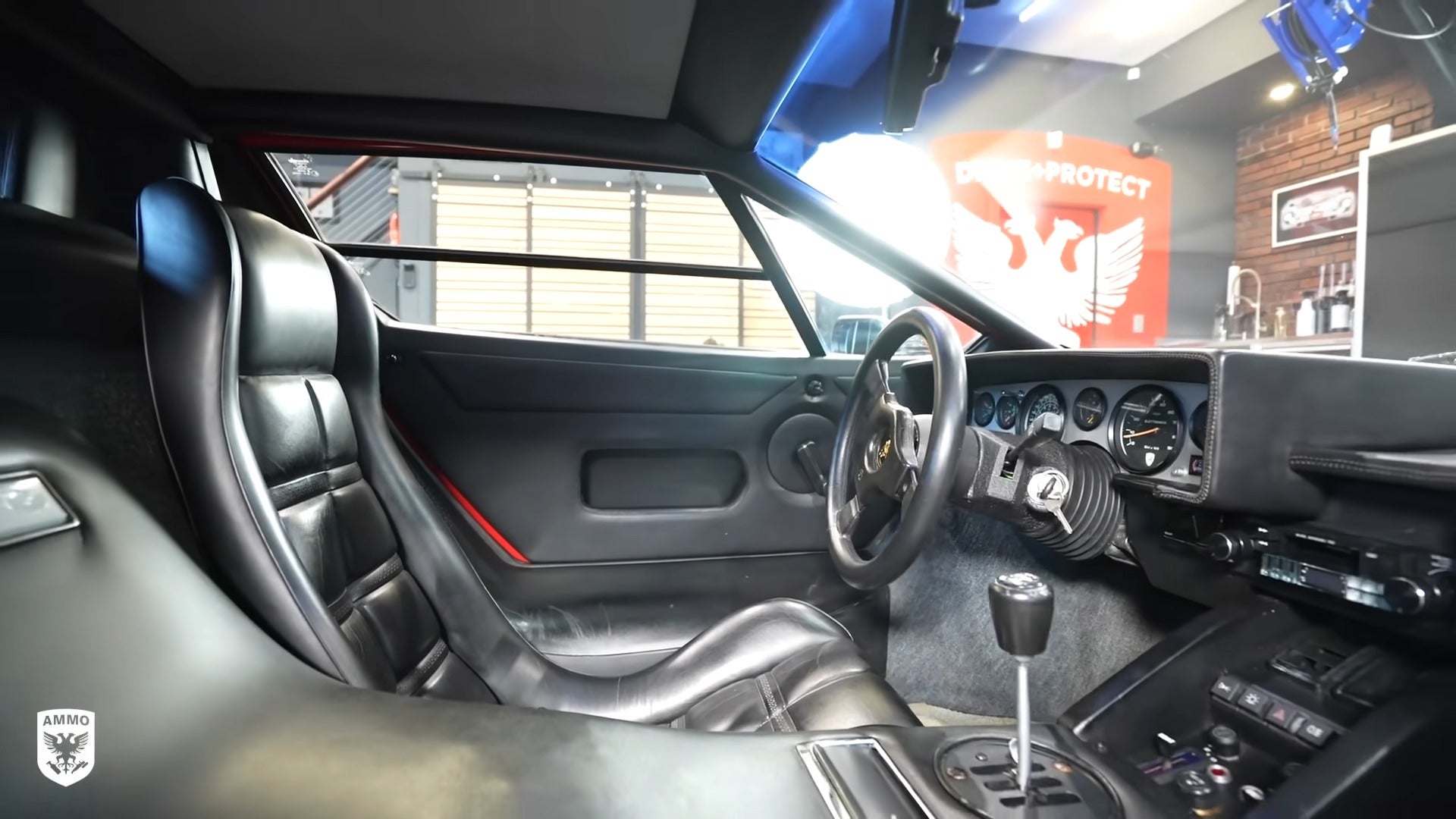 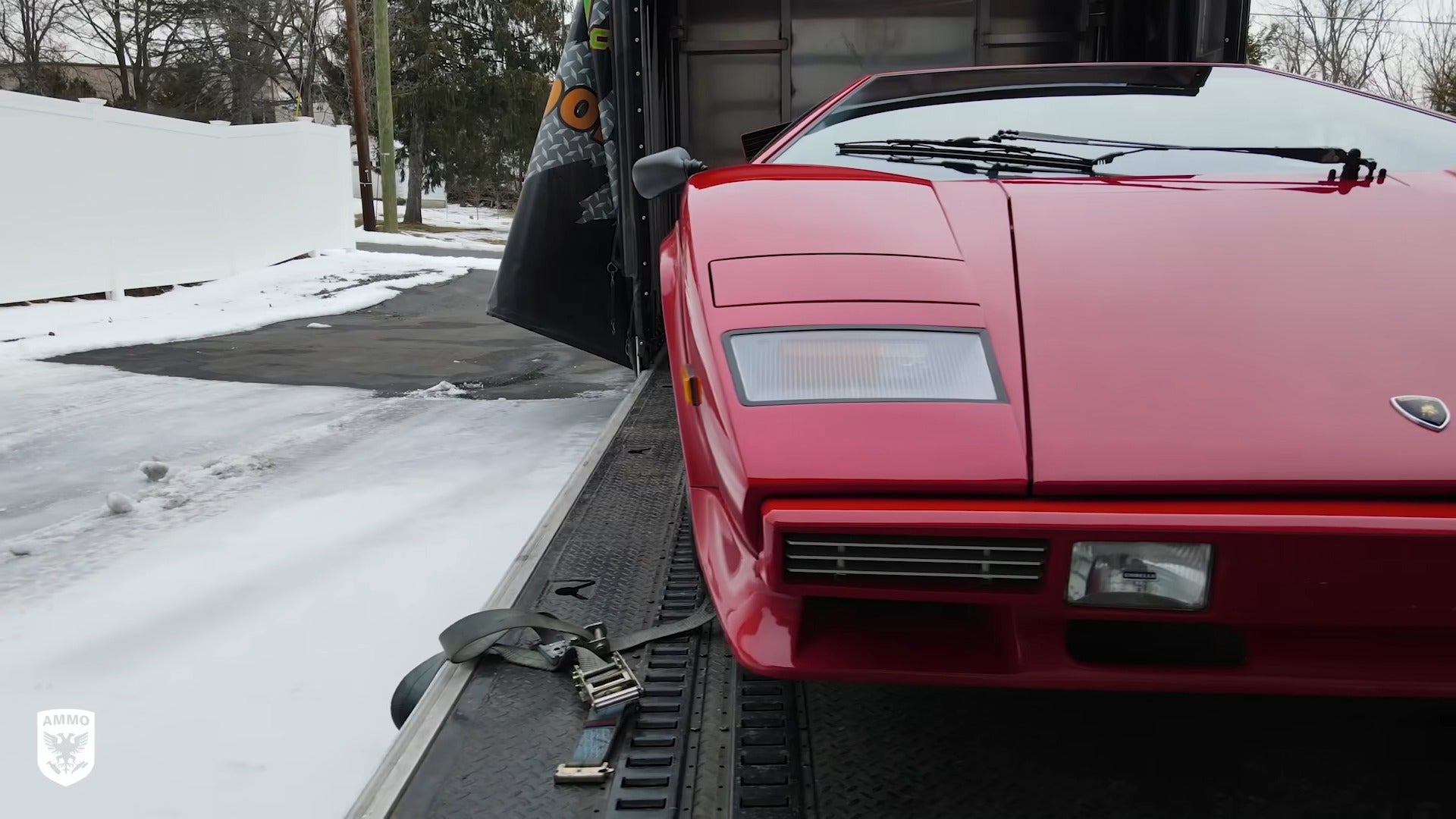 Kosilla’s work shows just how far the right tools and proper experience go when resurrecting a classic supercar from 20 years of neglect. Obviously, there’s still plenty of mechanical work to be done, but the cleaning and detailing job will make all the following steps much safer and easier to get done.