For the first time since I set out on my journey, I am homesick. It’s been three weeks of sleeping on random couches and airbeds and inside parked Allroads, in locations dotting the greater Los Angeles region, and I miss stability and a home. My trusty Toyota Hiace, Marsha, is still at the Truck Hospital undergoing rather complicated surgery, and the pace is understandable. This is not an easy fix, there are many outside parties involved, and the fact it can happen at all is something I’m thankful for (once again, shout out to the folks at World Famous 4×4 for agreeing to tackle the impossible!). But I’m stuck in Los Angeles living the opposite of the life I had when I first arrived and had her. Instead of living it up in Mercedes Benzes I don’t own on Rodeo, I’m pinching pennies to save for repair costs and staying put in a vacant home a friend has let me crash at indefinitely. Above all, I’ve found my spirit for adventure to be dulling.

For a while, I considered flying back to Houston, to the bedroom another friend kindly lets me borrow in his home in the suburbs, eventually coming back to California when the van was safely repaired to set out again, reinvigorated. But for as much as I appreciate his generosity, the idea of going back made me feel worse than sticking it out until the van was back. I am trying very hard to not burn myself out. But I don’t want the kind of stability I had before in that spare bedroom, and I found myself repulsed at the idea of being back in Houston. 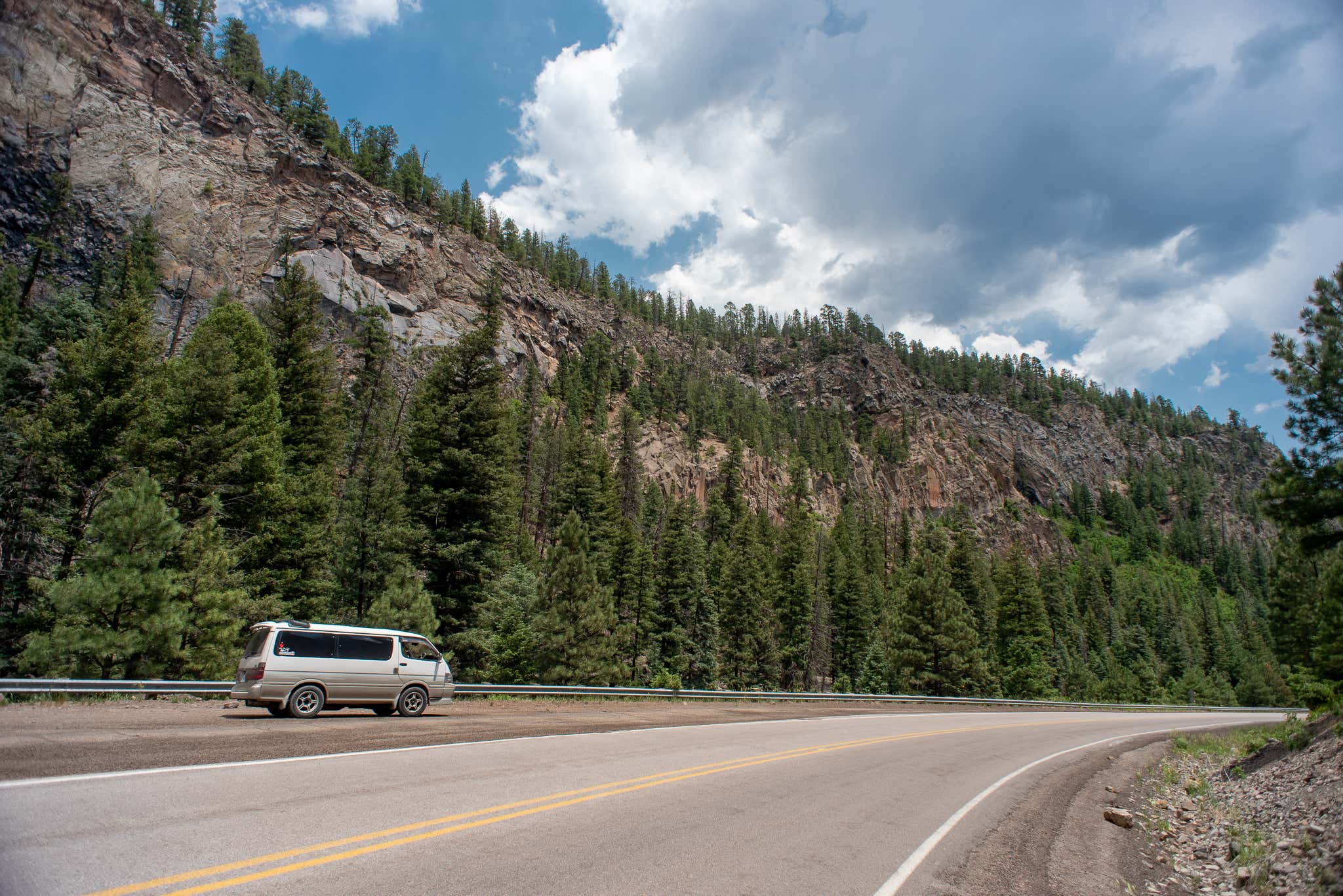 [Editor’s note: Writer Victoria Scott is taking off to travel the country this summer and explore car culture in a JDM 1995 Toyota Hiace, and we’ll be chronicling her adventures through a series on The Drive called The Vanscontinental Express. It’s natural to yearn for the open road at a moment when it feels like the world is waking up from a yearlong daze. But as a trans woman looking for her place in the world, Victoria’s journey is anything but your average road trip. This is part 11; you can read parts one through ten here.]

Despite the literal highs and lows of traversing mountains in a van, and the ever-changing scenery that accompanies it, I had found a lovely rhythm. Every morning, I would wake up and appreciate the view I was gifted with. I would brush my teeth and shave with a bottle of water; even on days where I’d most likely not see another soul, I’d put on eyeliner, a dash of concealer, and lipstick, just for my own comfort in my body. I’d have a caffeinated Clif bar and a protein shake, and write until the shade of the van no longer covered my laptop monitor screen. Then I would pack up, drive down the mountain, find myself a coffee shop, and look for where I’d head that evening, and repeat it all over again. For such a nomadic life, it had a wonderfully comforting pattern, itself its own kind of stability. Despite being physically adrift, I was mentally moored.

And road trips have a natural progression to them that I find immensely enjoyable. Even on days where I’d only drive a handful of miles, I still moved closer to my goal—whether that was the next event, the next city, or simply moving on and writing more stories at the top of a different peak—and the combination of the progression of travel with the fixed feeling that my routine offered was the perfect mental salve to keep me happy and doing my best writing. 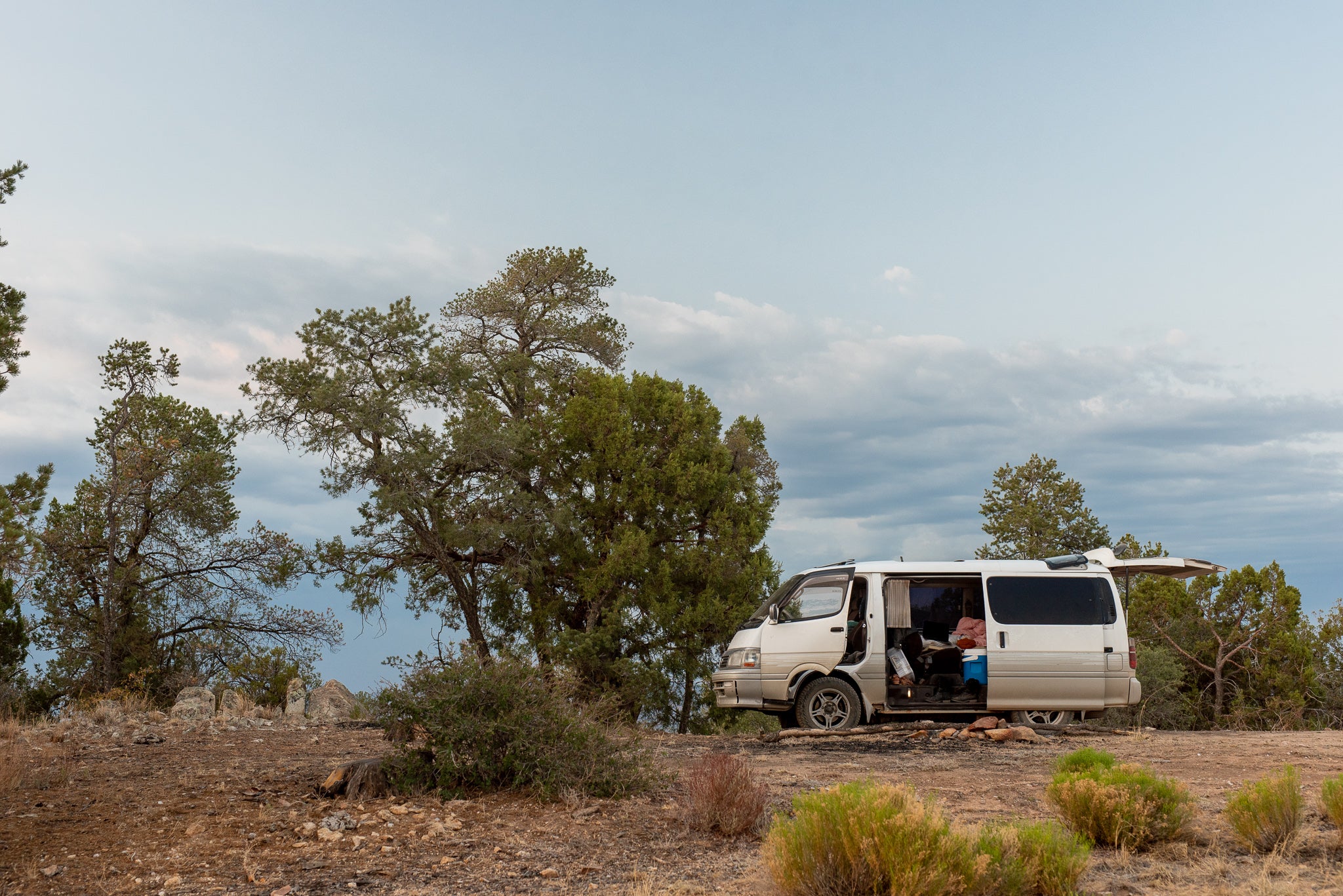 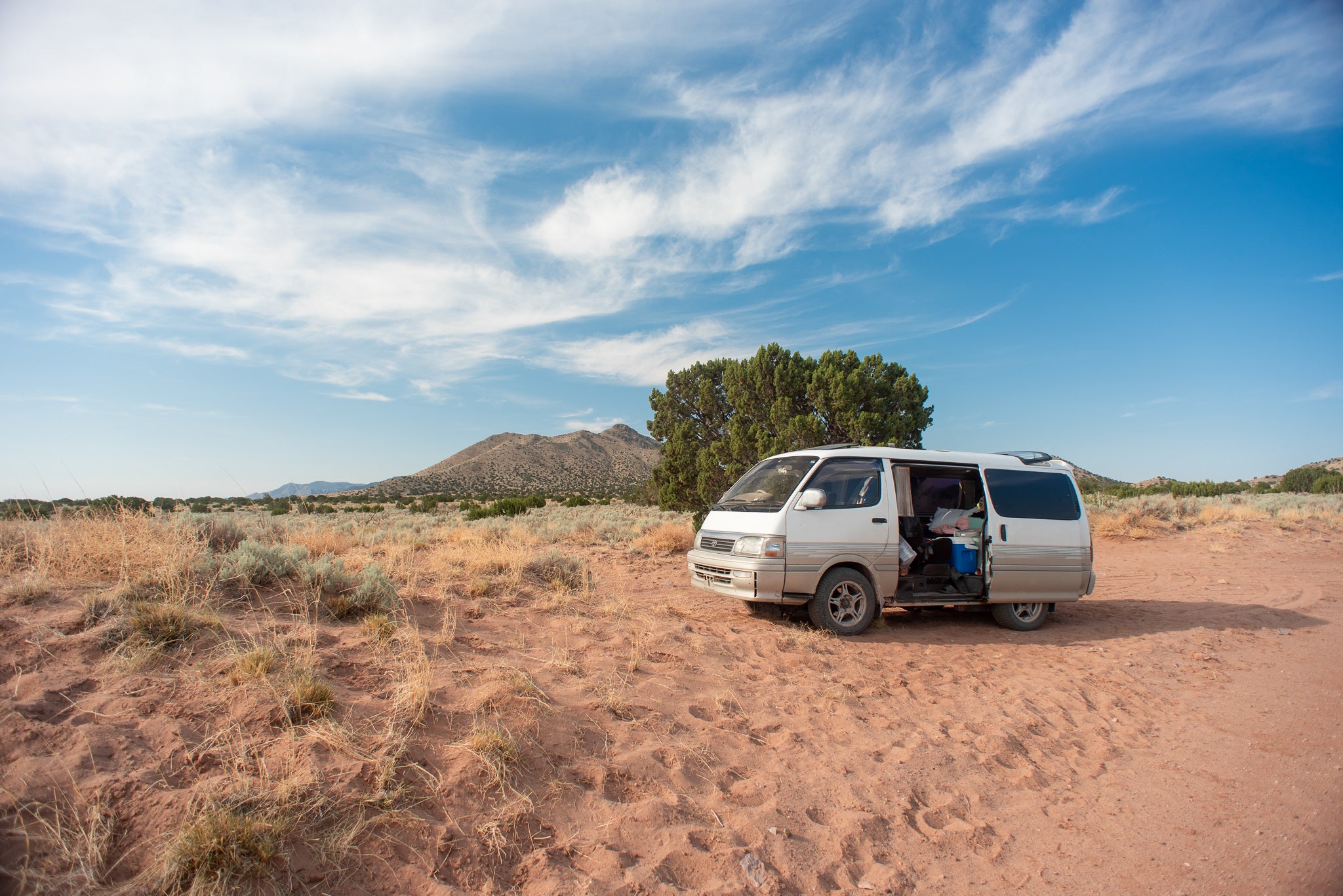 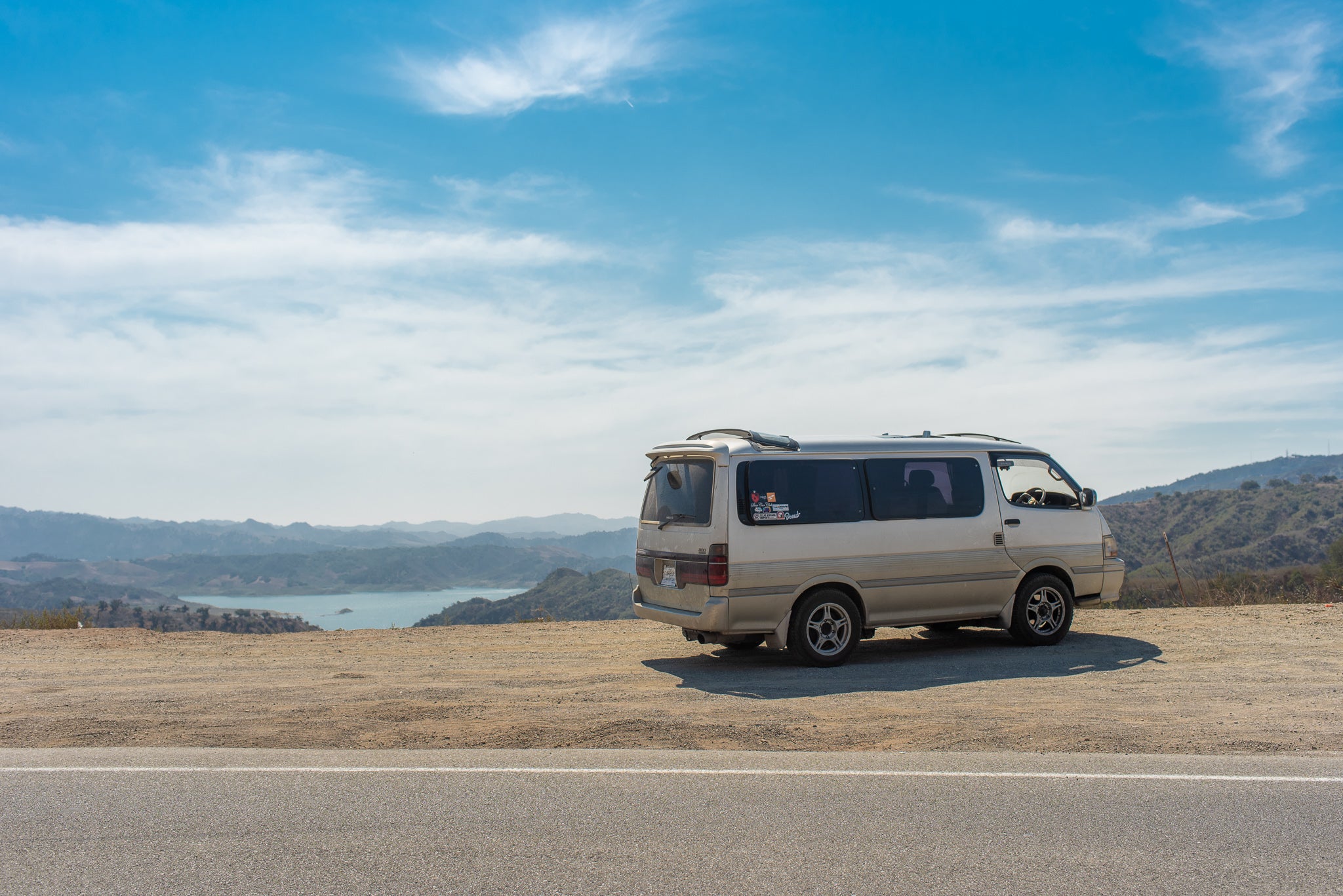 At the core of all this was my van.

I have never quite enjoyed a vehicle as much as I love this van. I’ve objectively had some great cars: a MK3 Supra, 3rd-generation Prelude Si, even an 80’s Benz diesel with a manual swap. But all of them enter my life, serve a purpose, and leave. I avoid letting my sense of self get too deeply ingrained into the inanimate, 3,000+ pound hunks of metal and rubber and glass that I own and pilot; the piece that launched my writing career was about this specific feeling. I’ve been trying to figure out for weeks why this van has become so deeply wrapped up in my psyche after spending so many years telling myself that I am a person who doesn’t need to be defined by her car. It’s a Hiace, not a personality trait. 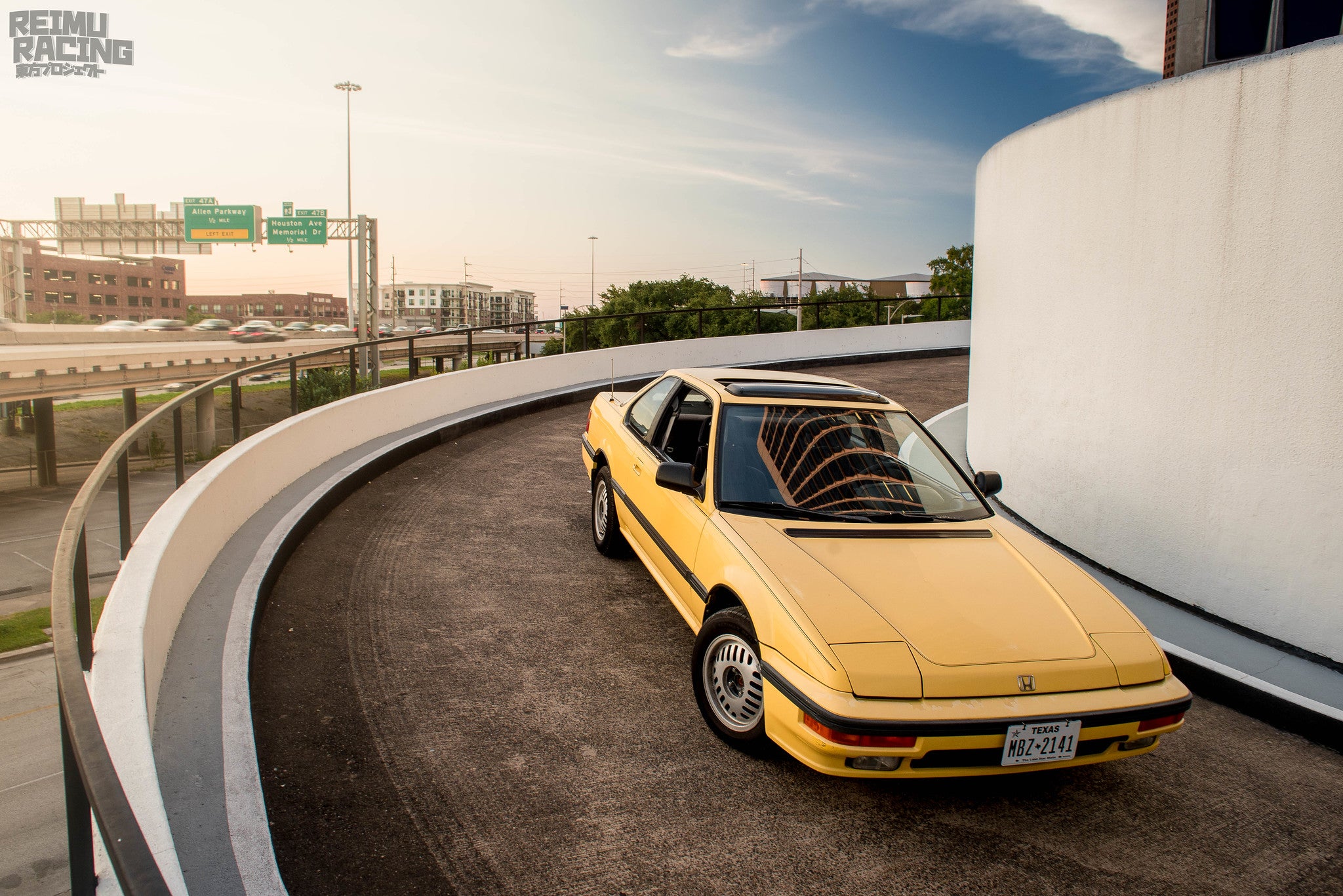 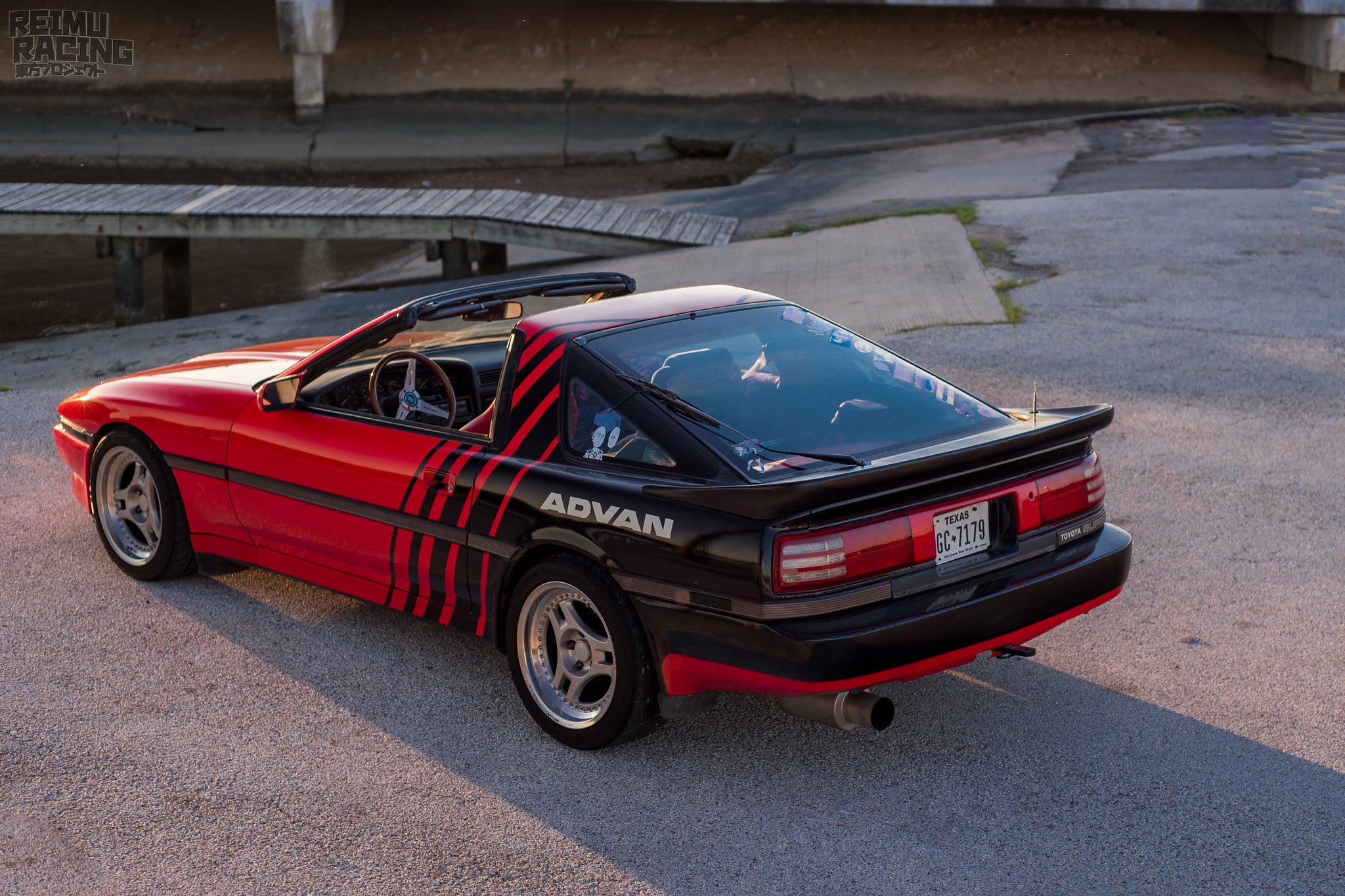 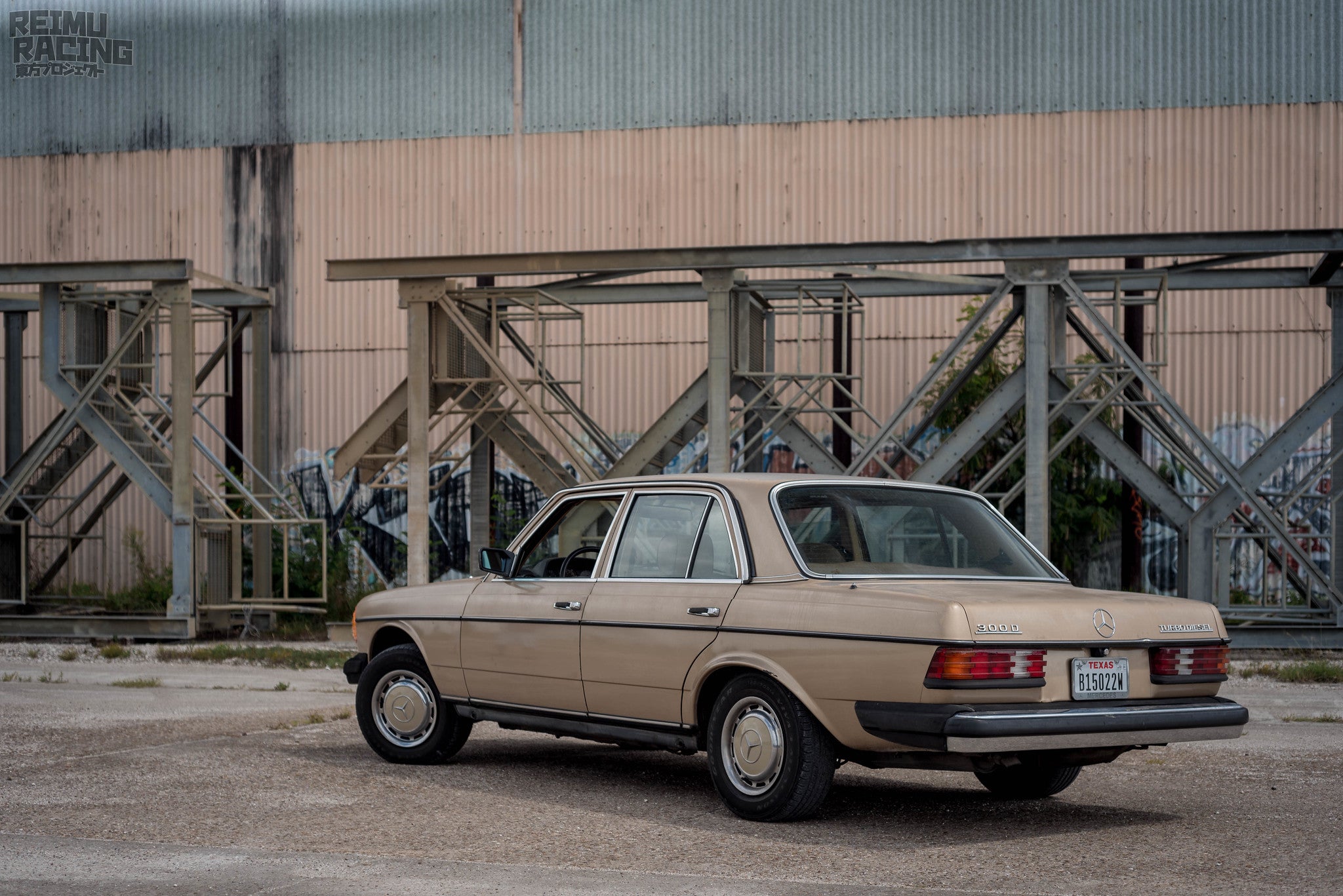 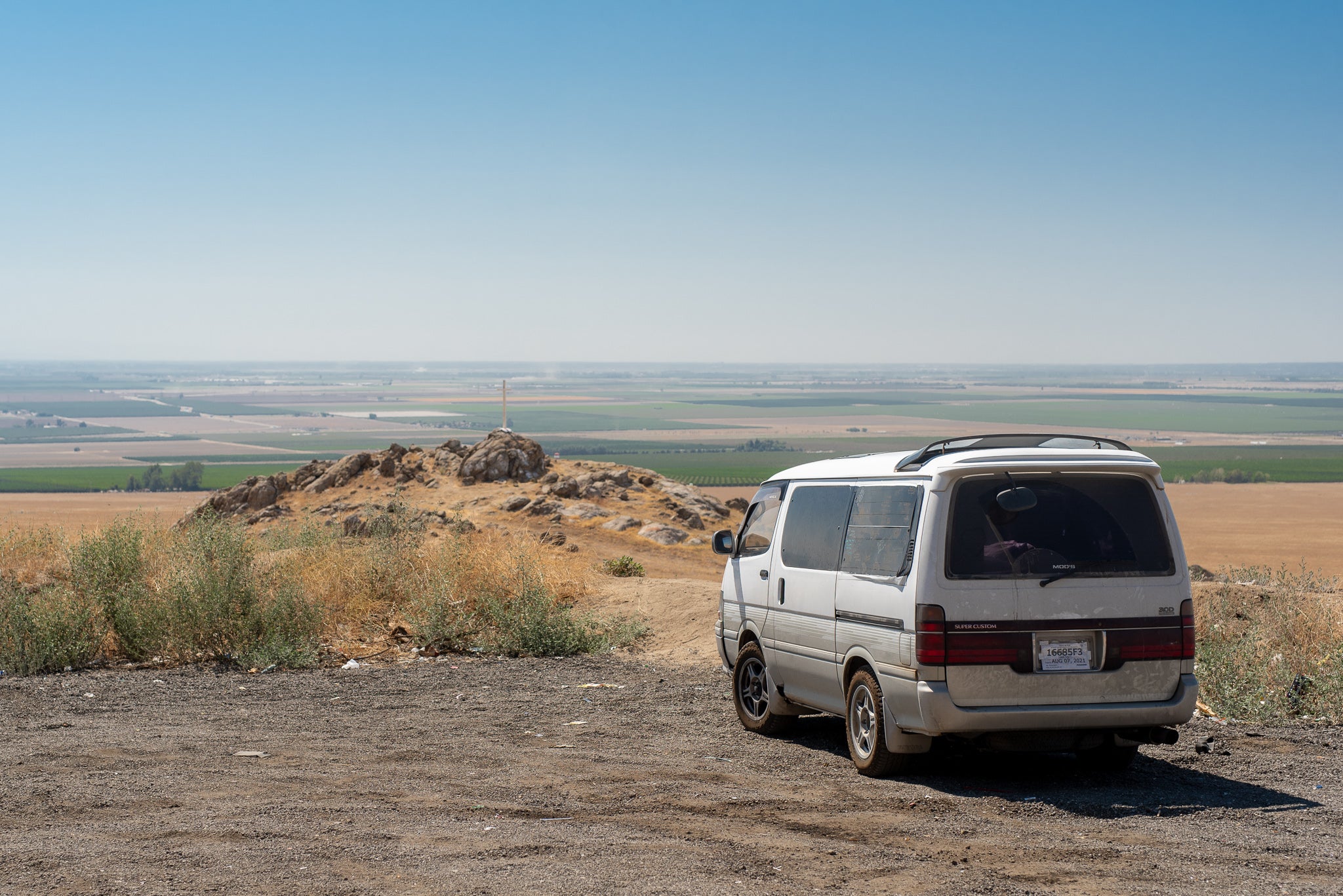 But I’ve never had a home where my heart was. Even in the relationship I enjoyed before I launched on my journey, we rented a decrepit suburban house that would literally flood every time it rained hard, a common occurrence in the literal swampland it was built on. Some of our neighbors hated us; the trucks they’d park out front with fascist insignia emblazoned on the rear windows ensured we knew that. We both rapidly internalized that even if we stayed together to our dying breaths, it wouldn’t be in that place. We skipped out on buying furniture. We stopped bothering to call the unresponsive landlord when things broke. When the relationship fell apart, I deconstructed the shared life we had, extricating my things and myself from the closest experience to home I’d ever felt, leaving only minimal fragments of it in that spare bedroom in my friend’s house. All that’s left for me “back home” in Texas is a pervasive feeling of alienation and splinters of a broken heart; of course I feel no desire to fly back.

And before that, I floated through a variety of tiny apartments with rapid-fire lease terms and restrictive legalese that ensured I would never feel a sense of ownership over my space. I am still waiting to have a bedroom or an office that I’m allowed to paint whatever color I feel like. Before that? I lived with well-meaning but very overly-attached parents; I couldn’t close the door to my own bedroom until I was nearly twenty years old. The last time I thought I would enjoy a feeling of home was at the age of nine, in my childhood bedroom emblazoned with a toy car rug (you know the one) and a little fish tank, and that illusion was shattered when my father lost his job. Since then, I haven’t really felt I belonged anywhere as more than a temporary spot to crash until I moved on to whatever rented roof over my head and bedroom I’d throw a mattress into was next. 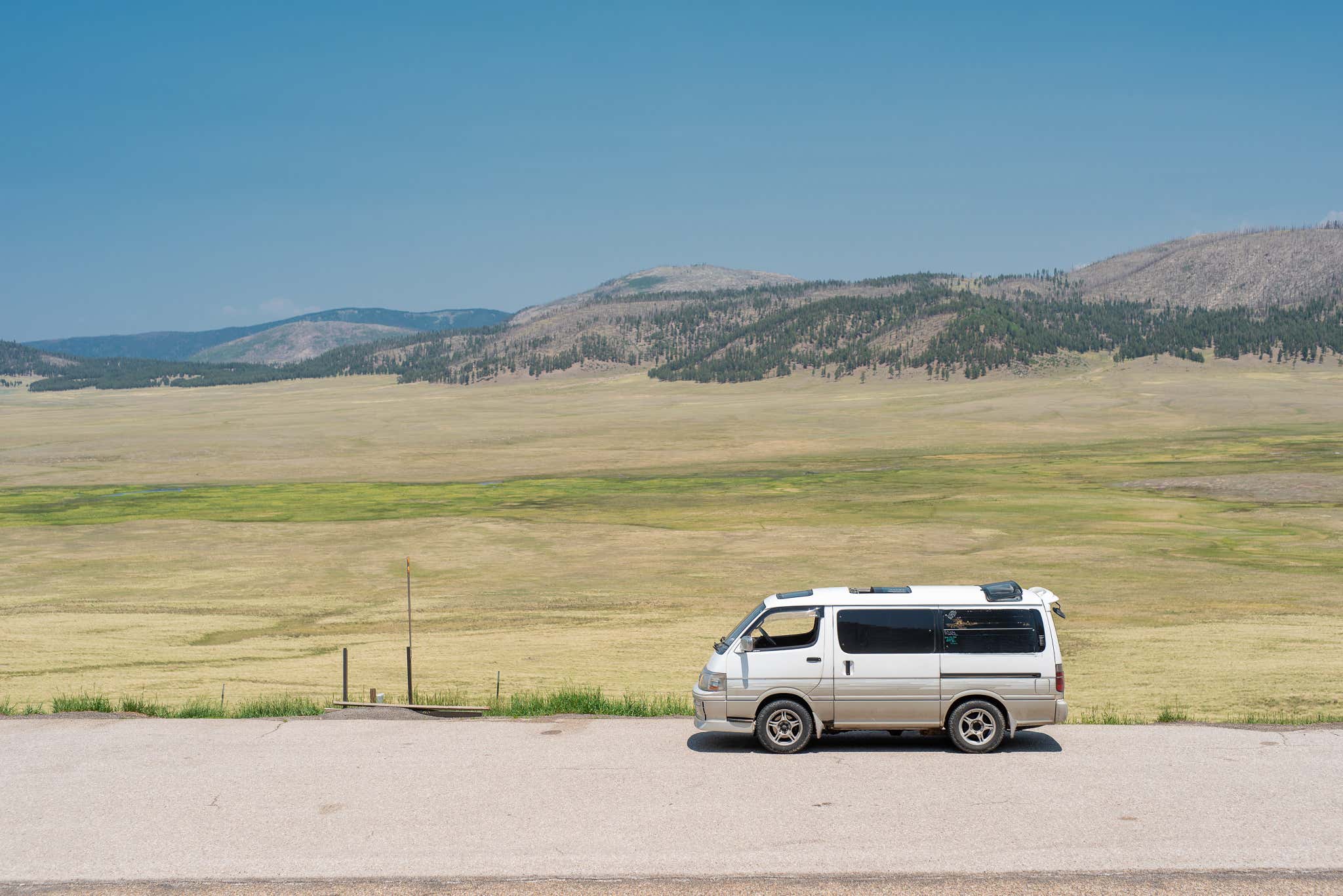 My comfort of my van, therefore, is a staggeringly new feeling to me. I bought it with cash. It doesn’t have running water or a kitchen but it has a comfortable bed, it has my possessions, and most crucially, I have complete control over my space. If I decided to paint Marsha pastel pink or drive her up Everest, it is solely my decision and I am allowed. There are no lease terms or mileage limits. There is a sense of freedom that comes with driving her—with living in her—that I’ve never felt before.

This Hiace is not just a van. This is a spiritual save point. My Toyota is what a true home feels like, and that’s why I have become attached in a way I swore I never would to a car again. 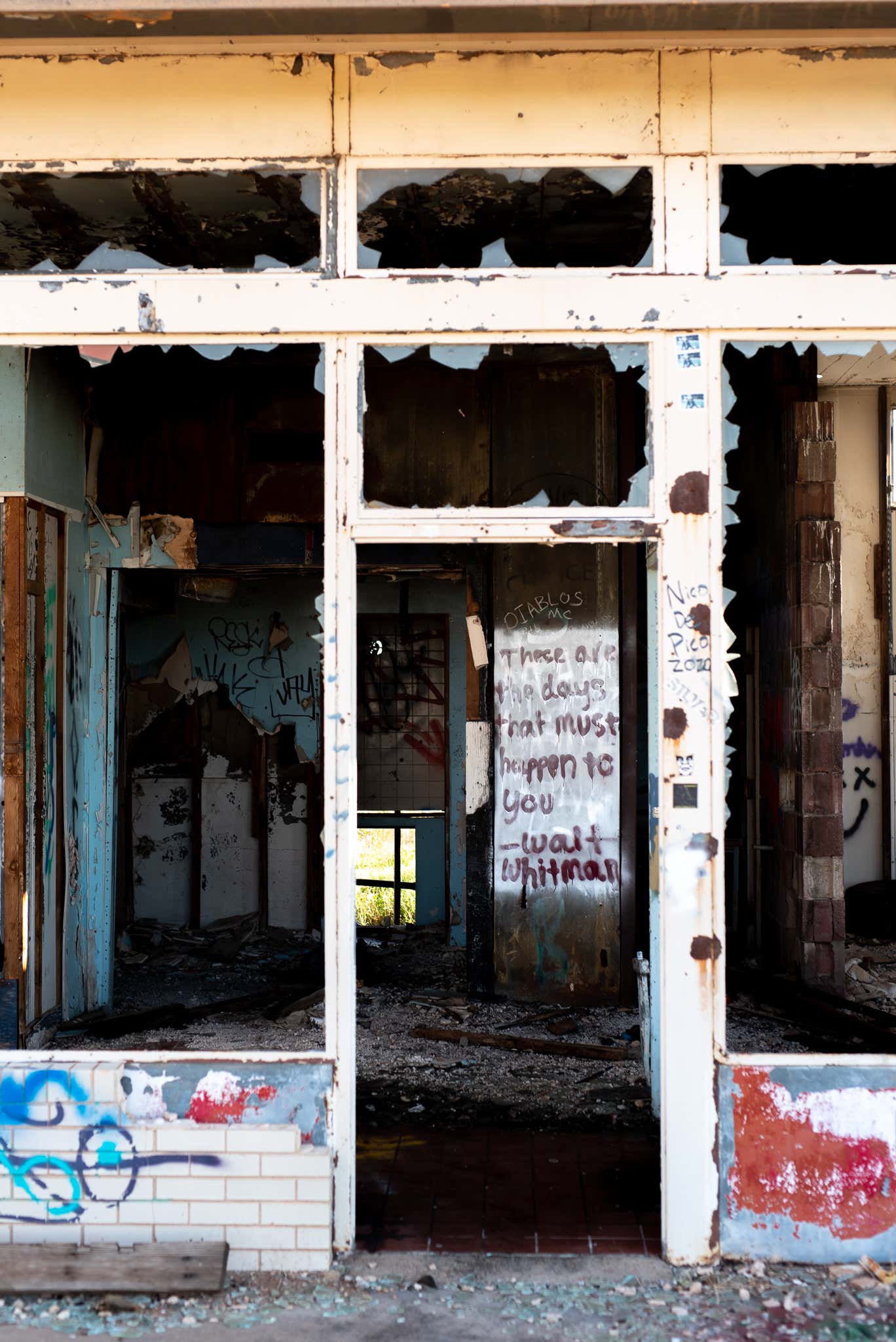 So I’m hanging on for now. This is the natural lull in action any good adventure story has. My journey can’t just be the pure joy of discovering mountains on a daily basis, as fun as that would be—an experience this incredible needs a sense of friction to keep its meaning and remind me that I’m fortunate to have found belonging and see the sights I’ve witnessed. At the same time, I know I am not ready to be done, and I miss the open road. I’ll get through this, writing stories to kill time, and when World Famous calls me that she’s done, I’ll go home. It doesn’t matter where in America that is. I’ve got my van; that is my home.

You can follow Victoria’s journey in real-time on Twitter here. Got a tip? Send us a note: [email protected]