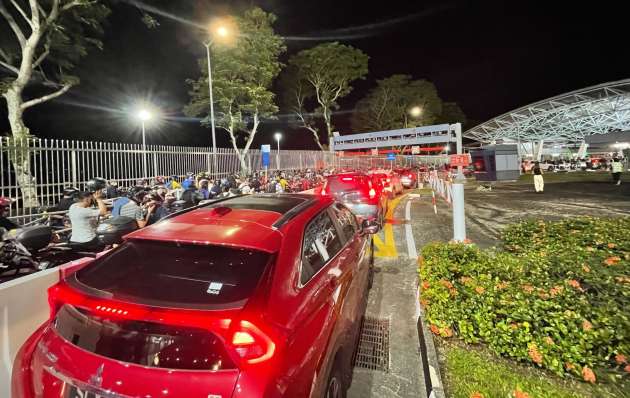 After two long years, the Malaysia-Singapore land border has finally reopened to all vaccinated travellers without the requirement for Covid-19 testing or quarantine. The busiest border crossing in the world was shut abruptly over two years ago. It was March 18, 2020, the start of the pandemic and Malaysia’s movement control order.

As expected, there were lines of people waiting at the Woodlands checkpoint in Singapore yesterday night to be the first ones to cross the Causeway on foot, and Singapore’s Immigration & Checkpoints Authority (ICA) also reported queues for cars and motorcycles at both Woodlands and Tuas checkpoints.

“Most of the travellers had their documents ready, and thus cleared immigration smoothly. Overall, immigration clearance was smooth and there were no queues by 1am,” ICA said, reported by CNA, which took the photos and time lapse video of the Causeway below.

Singapore authorities said that more than 11,000 travellers cleared the two checkpoints in the first seven hours of the reopening of the land border. According to CNA journalists making trips in both directions, traffic was smooth at daybreak and there were no reports of congestion from 6am to 9am. Things might be different this weekend, though.

For Singapore-registered vehicles entering Malaysia, the government has declared a one week Road Charge (RC) exemption from April 1-7. This means that the usual RM20 RC will be waived for both Touch n Go card users and cars with the RFID vehicle entry permit (VEP). In addition, no toll imposed on all vehicles at the Causeway and Second Link for a week from April 1.

While travel insurance for Malaysians visiting Singapore is no longer compulsory, foreign vehicles entering the republic must have a valid VEP, an approval email from Singapore’s Land Transport Authority and an Autopass card. SG arrival cards must be filled, and proof of vaccination must be furnished at checkpoints.