The 2021 Audi e-tron Sportback and e-tron SUV will finally get the company’s digital matrix LED headlamps. The lights feature 1.3 million micromirrors and can now offer five welcome and exit lighting signatures with motion graphics. Those lights have even more functionality in Europe, but we’ll get to that in a minute.

Here and now, on U.S. streets, the lights project a 50-meter “light carpet” that keeps the light within the driver’s lane, and then extends it right or left to avoid oncoming traffic. The low beams stick to the ground below oncoming traffic and illuminate people, animals and objects on the side of the road. One of the coolest features is the tire marks projected on the ground in front of vehicle to help avoid hazards like potholes, debris and the like. Those million mirrors are automatically adjusted 5,000 times per second.

Audi notes the lights’ total functionality “is not fully available in the U.S.,” and that “the brand continues to work with government officials in an effort to do so for U.S. customers.” 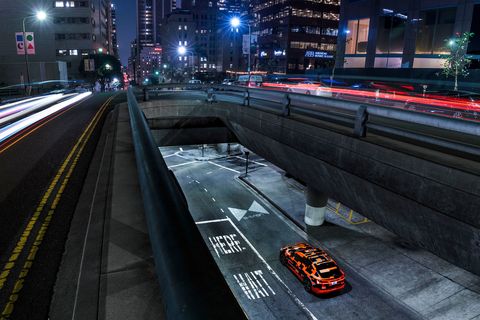 The reason we’re still waiting on full functionality is because of a law written right as the first Chevy Camaro was hitting the streets in 1967. It’s called Federal Motor Vehicle Safety Standard No. 108 or FMVSS 108 for short.

In Europe, Audi’s digital lights can stay in high beam mode, but punch out holes for oncoming traffic or pedestrians. Check out this video, shot when Audi showed off the new headlights for journalists at the LA Auto Show, to see the unrestricted functionality.

Engineers from the Society of Automotive Engineers, among other organizations, have submitted recommendations on these new lights, which several manufacturers besides Audi are looking into (BMW, Mercedes-Benz, Toyota).

Audi originally petitioned NHTSA in 2013 along with Toyota and others, and the organization was taking public comments about ADB (adaptive driving beams) as recently as 2018, but there has yet to be a ruling. We talked to NHTSA rep Kathryn Henry who only said, “NHTSA is working to finalize the rulemaking for adaptive driving beam headlamps in 2020.” According to the reginfo.gov database the issue is in the “Final Rule Stage.” The outfit declined to share a more specific timeline.

So, as they say, keep your phones on. These new Audi e-tron EVs will get these new trick lights; hopefully we’ll get the full functionality versions soon. For safety! 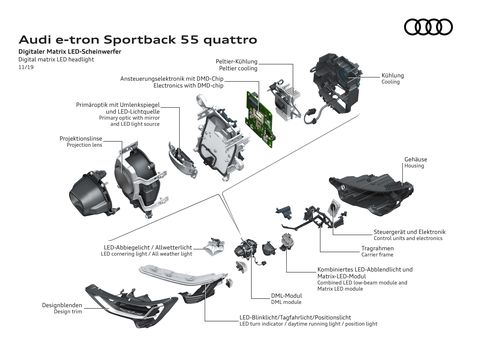