The National Highway Traffic Safety Administration (NHTSA) has opened an investigation into the Porsche Taycan following numerous complaints from owners who say they lost all power while driving, and in more than half of cases were unable to restart their cars.

Opened Monday and first highlighted today by Automotive News, the inquiry seeks an explanation to at least 11 reports of power loss, nine of them filed with the NHTSA’s Office of Defects Investigation (ODI), and at least two with TREAD (Transportation Recall Enhancement, Accountability and Documentation). Concerning both 2020 and 2021 model years, the complaints report sudden and complete drivetrain power failures both while stationary and while in motion, followed in six cases by a failure to even restart. One owner reported becoming locked inside their immobilized car, while another says their “car slammed on the breaks [sic] and stopped in the middle of the road.” 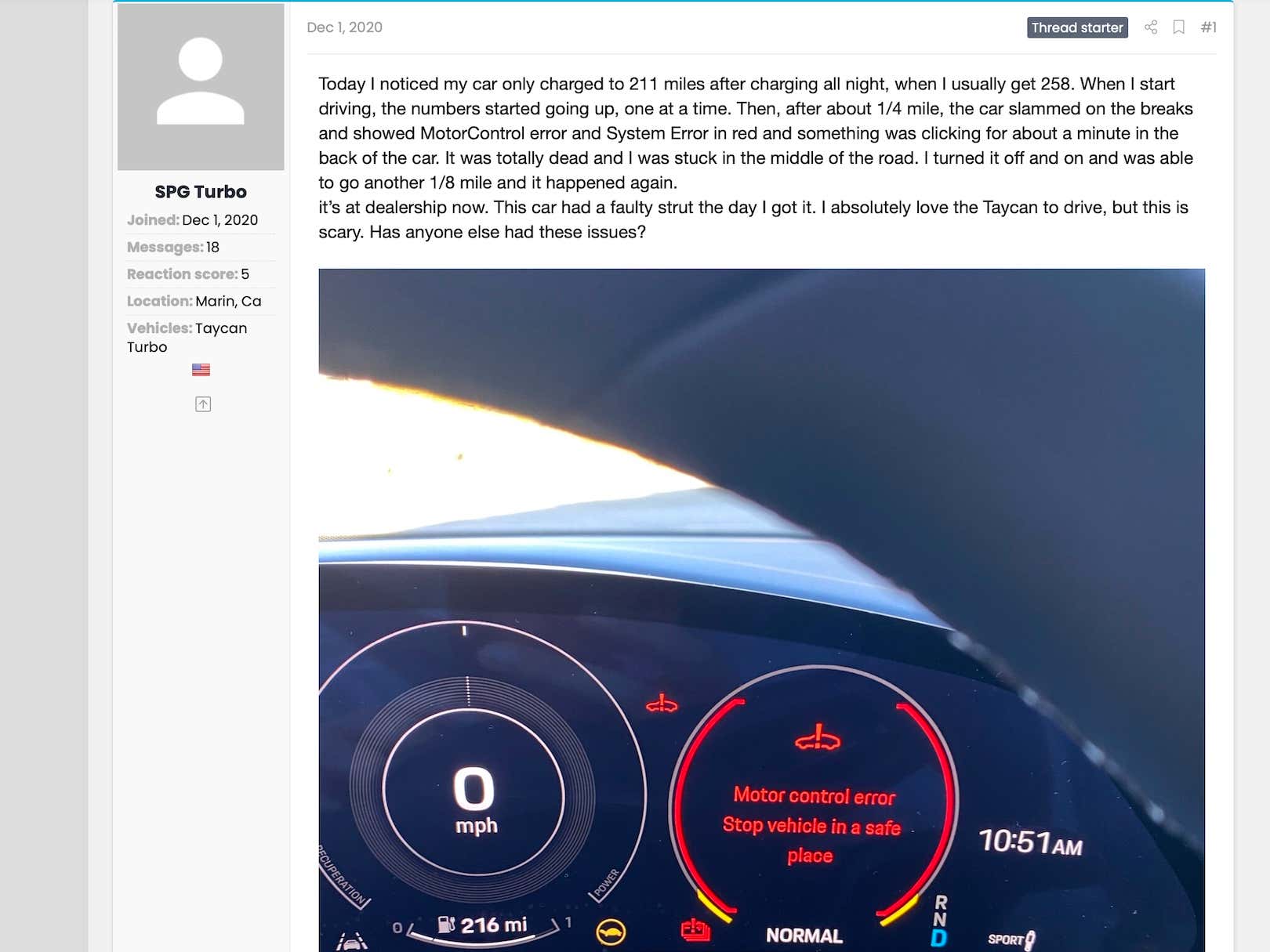 One possible culprit has been identified in the public document released on the investigation: the Taycan’s 12-volt electrical system.<CQ Like many electric vehicles, Teslas included, the Taycan has a regular 12-volt car battery used mostly for operating accessories like climate control and infotainment—though in the Taycan’s case, it’s apparently somehow connected to drivetrain controls too. Faults in the 12-volt system can thus cause a wide range of problems, from door mechanism failures like those widely reported by Tesla owners and the Taycan owner above, to even suspected drivetrain control problems in the case of this Porsche.

The NHTSA’s investigation  will begin with the NHTSA contacting Porsche to ascertain how many reports it has received of similar problems, according to Automotive News, and specifically to determine if the “scope and severity” of the problem is deemed great enough to warrant a recall. Given the Taycan’s significance as Porsche’s first mass-produced electric car, a problem as serious as power loss won’t simply be treated as case closed over in Stuttgart.

“We are aware of nine customer complaints and have, as a result, received the NHTSA inquiry, which is a routine part of their oversight process,” commented Porsche North America’s spokesperson for the Taycan, Calvin Kim. “We are already underway in addressing this issue and look forward to answering the NHTSA’s questions and quickly resolving the underlying issue, should one be confirmed.”

“All Taycans remain safe to drive—we are not aware of accidents reported in connection with this issue,” Kim concluded.