Out on the open road, the power on tap makes the Skoda Kushaq 1.5 TSI a fast performer and a whole lot of fun. While all variants of the Kushaq come with an improved version of the Rapid’s 1.0L, 3-cylinder TSI engine and some have a torque-converter AT too, the top-end Style variant also gets the 1.5L, 4-cylinder TSI engine which was used in the Karoq. It’s matched to a 6-speed MT and a 7-speed DSG. The engine produces 148 BHP & 250 Nm. This makes it more powerful than the Korean twins’ 1.4L turbo-petrol (138 BHP & 242 Nm), but not the Duster 1.3L’s 154 BHP & 254 Nm. There is no diesel engine on offer. It’s very sad that VAG has decided not to make its 1.5L TDI BS6 compliant. Those with high usage will be disappointed, especially with petrol now costing over 100-bucks a litre!

Throttle response is satisfactory and the Kushaq rolls off without a fuss. Once on the move, the 1.5 TSI provides good driveability. We were happily cruising within Navi Mumbai in the higher gears. The motor can pull from as low as 1,000 rpm, although it’s more comfortable above 1,200+ rpm and alive above 1,500. The bottom end is good, because of which we were climbing up a flyover at low rpm in 3rd gear itself. Importantly, this engine pulls much better than the 1.0 TSI from low revs. At the end of the day, you can’t argue with displacement and this is 50% bigger in size than its smaller sibling. Downshifts aren’t required frequently. The light electric steering, compact size of the car, taller seating, good ergonomics and excellent frontal view make the Kushaq superb to drive in the city.

However, an important point to keep in mind is if you let the revs drop too low at crawling speeds or over speed breakers, the engine will just abruptly stall! This stall-happy nature reminded us of how the Skoda Yeti was and take it from us, you will 100% stall the Kushaq 1.5L until you get used to its power delivery characteristics. When it stalls though, all you need to do is press the clutch pedal all the way in and the engine fires back up! We had also seen this feature in the Duster Turbo. Of course, we went on testing this auto-restart feature until the computer gave up and flashed a warning on the MID saying “please start the engine manually”.

Out on the open road, the power on tap makes the 1.5 TSI a fast performer and a whole lot of fun. Skoda says it’ll do 0 – 100 in 8.6 seconds on a good day and we totally buy that (1.0 TSI’s timing is 10.6 seconds). However, it doesn’t have that crazy streak of the 1.0L. While the smaller 1.0 TSI is wild and begs to be driven hard, the 1.5L is more mature with its power delivery. Think of the 1.5L as the grownup bigger brother to the mischievous brat 1.0 TSI. Even torque steer is extremely well-controlled for a 148 BHP FWD car. The 1.5L TSI is very tractable and pulls cleanly. Driving it on the highway is an addictive experience and you will find yourself driving fast, even if you didn’t intend to. To overtake, just drop a gear and floor it…the strong mid-range will ensure you fly past the slower vehicle. The engine revs in a linear fashion till ~6,600 rpm. In terms of cruisability, the Kushaq can run at triple-digit speeds all day long without breaking into a sweat. The TSI spins at a relaxed ~2,000 rpm at 100 km/h in 6th gear. Beyond 5,000 rpm, however, the engine starts getting a bit boomy. Summary = this is overall a fast, smooth & lovable engine.

Enthusiasts will relish the 6-speed MT. It is slick, with short throws and well-defined gates. The gears are closely stacked together (try shifting from 4th to 5th and you’ll see). The clutch, however, is quite springy and you need to carefully modulate it in stop-and-go traffic. Its travel range is longer than we’d like too. This trait of the clutch gets irritating in bumper to bumper traffic.

The 1.5L engine also comes with the notorious 7-speed DQ200 DSG gearbox. We will be driving it soon. You can expect the typical DSG traits – it will be fast shifting, enthusiastic to drive and smooth. On the flip side, we have serious concerns over its long-term reliability. Just search on Team-BHP and you will see story after story of DQ200 failures & breakdowns. Also, when crawling in slow traffic (1st – 3rd gears), you will experience a little jerkiness which is a typical DSG trait.

The 1.5L TSI is overall refined. It’s a lot smoother than the 1.0 TSI which has some 3-cylinder vibrations, noises, groans & growls. That said, even the 1.5L TSI gets somewhat boomy past 5,000 rpm. We found tyre & road noise at 110 – 120 km/h on concrete expressways / rumble strips to be higher than expected in a car with premium aspirations. On the other hand, wind noise is nicely controlled at expressway speeds.

ARAI fuel economy figures for the Kushaq have not yet been revealed. Drive the TSIs with a light foot and they should give you acceptable FE. Turbo-petrols are very sensitive to throttle input though; drive it hard and you’ll see the tank needle drop fast. Skoda has given the 1.5L Kushaq Active Cylinder Technology. When cruising calmly on the open road, the ECU shuts off cylinders 2 and 3 to reduce fuel consumption. This 2-cylinder mode will lead to good long distance FE, that is if you drive calmly (which is tough in the TSI). While we never felt the cylinder activation / deactivation happening, we did see an “ECO” sign on the MID which might be signalling its action. The Kushaq’s ride quality can be termed as mature & compliant. We have to say this is the perfect suspension tune that Skoda has chosen. It is neither too soft (Hector) nor too stiff (Seltos). Owners will find the ride quality to be endearing. It offers good comfort levels in the city & on highways alike. Sharp ruts do find their way into the cabin though – the Kushaq doesn’t round off the bigger potholes. This could be due to the 17″ rims & 33 PSI tyre pressures. Ride quality of the lower variants with 16″ rims will be even better.

As expected of a Skoda, the Kushaq has sorted road manners. It has excellent straight line stability and composure at high speeds. In fact, 120 km/h feels more like 90 – 100 km/h. You can confidently maintain high speeds on the expressway.

Driving the Kushaq on winding roads was fun, with the front end seemingly eager to turn. Sure, there is some body roll, but it’s a family crossover at the end of the day. Nothing too alarming, and we actually had a blast coming down the Lonavala ghats. The tyres are the same Goodyears used in the Octavia. While they felt terrible on a 187 BHP car, the Goodyears are more acceptable on a 148 BHP car. Grip levels on the mountain roads was fair. Although, we would still recommend upgrading to better rubber as these tyres were squealing under hard cornering @ 85 km/h!

The EPS feels direct & sharp. It is light at parking & city speeds which is now the market’s preference. Our complaint is that, at 100 – 110 km/h, it is still a level too light and comfort-oriented for enthusiasts’ tastes. We wish Skoda had firmed things up more for highway speeds. Even while cornering hard in the Lonavala ghats, GTO wished that the steering was firmer. A user selectable ‘Sport’ driving mode that would stiffen things up would be nice, but Skoda has omitted driving modes in the new Octavia as well as the Kushaq.

While its main rivals, the Creta and Seltos, get all-wheel disc brakes, the Kushaq makes do with discs at the front and drums at the rear. The brake pedal is well calibrated and feels sharp to use. In fact, we felt that the brakes of the Kushaq were more confidence-inspiring than that of the Korean twins. The braking is powerful and we felt confident with them on our highway run.

Skoda is the first name that pops to mind when we speak of unreliability and bad after-sales experiences. Truth is, many owners have suffered multiple breakdowns, especially with the DQ200 DSG gearbox. Even apart from the gearbox, don’t expect a Toyota or Maruti kind of ownership experience over 5 – 10 years. Take the extended warranty without a second thought, and be sure to get the car serviced on time. For its part, Skoda is trying to improve its brand image with maintenance packages etc., but the dealers are the same, the cars are complicated & parts are expensive. Those buying the 1.5L MT or 1.0L AT (torque converter) / MT might enjoy better long-term reliability than owners of the 1.5L DSG.

You’ll enjoy this car on the open road: There’s no insulation sheet under the bonnet. Both the Korean twins get it: An ‘ECO’ indicator comes up on the MID when you are cruising at easy revs. The Kushaq 1.5L has Active Cylinder Technology, which shuts down cylinders 2 and 3 in the interest of fuel efficiency: 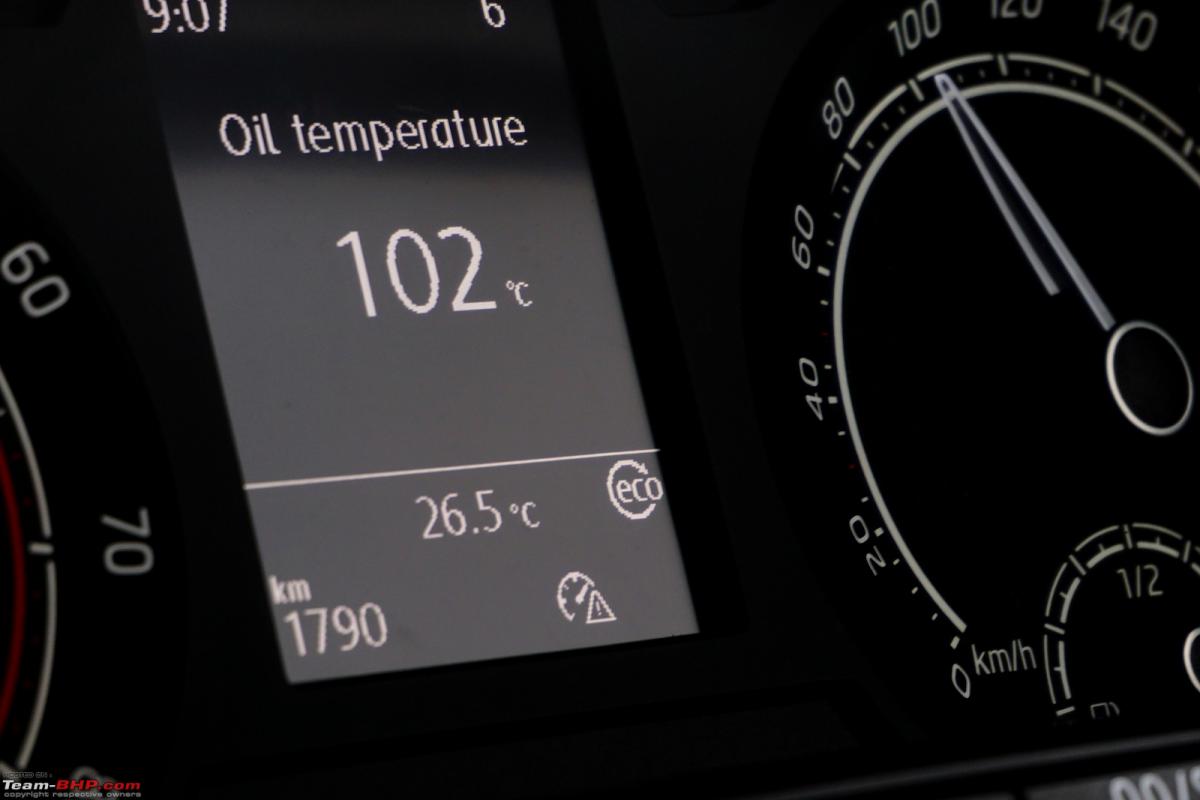 Continue reading the discussion on the 2021 Skoda Kushaq on our forum.