Suddenly I saw in my rearview mirror, the front portion of a truck, constantly growing big and in 1 second, it hit my vehicle

bark1234 recently shared this with other enthusiasts.

I took delivery of my MG Gloster Savvy black variant on 5th February. Was very happy with the car and experience. Unfortunately on 24th Feb, this happiness was rear-ended by a truck. This was my largest accident to date, the first-ever of being rear-ended in 10 years of driving. Previously maximum accidents have been some touch here or there, maximum fixed by 10-15k INR worth of repairs at one time.

On 24th Feb, I had taken my Gloster out for a leisure ride, I was alone in the car and at 10:30 PM was about to enter service road from Hosur Road (Bangalore), just in front of my apartment, I was driving at 40 km/h and slowed down to 26km/h. Suddenly I saw in my rearview mirror, the front portion of a truck, constantly growing big and in 1 second, it hit my vehicle, there was no horn sound from that truck. My head got hit on the headrest of my seat, I felt the car moved forward about a foot or two. I stopped, came to my senses, realized there is no injury, drove my vehicle to the side of the road. I saw the truck driver overtake me to park his vehicle, in the outer rearview mirror saw the damage on the truck also, its front had a good amount of dent, similar to the area of my car. He was slow and was about to park ahead of my car but then he accelerated away. I decided not to chase him.

Here are the pics I took some 2 hours after the accident:

Almost everything below the MG logo was impacted. There is visible damage to the rear door frame and bumper, fake exhaust (only left side), rear guard. Taillights were intact: Clear bend on the rear tailgate: Plastic bumper and the bumper trim below it are damaged. Also, the exhaust is gone on the left side. The rearguard is also completely crushed. This is an accessory. I wonder what would have been the damage if the rear guard was not there: Side bumper has also come out on the left side due to the impact from the back: Due to the black glossy color, the damage is not clearly visible in photos, I have added a video of the damage.

In my last 10 years of driving the i10, i20, and avenger, I had claimed insurance only twice, the maximum of those claims being around 14k, of which I had to pay around 7-8k. I had come to learn that the loss of NCB is more than most insurance claims. Insurance from MG Motors was going to cost about 1.8 lacs which was heavily loaded, I decided to go for my own insurance and based on my experience chose the cheapest, but included ‘return to invoice’ and voluntary deduction of 15k. The insurance costed me about 77k and was from UIIC(United India). I think what I should have taken additionally was, cashless and nil depreciation.

Anyways, I immediately called the policy-bazaar claim line, which was not reachable until 11-12 noon the next day. Took the vehicle to MG service center, where the service advisor inspected the vehicle and told me to taker the vehicle back since its safe to drive and bring it back once the insurance surveyor is assigned. I got back to calling Policy-bazaar, they asked for all kinds of documents and a video of the damage. It took 2 days for the service advisor to come up with an initial estimate probably since this is the first body damage of the Gloster and they don’t have a process in place. The service center advisor gave me the initial estimate of about 6 lacs, which I passed on to the policy bazaar. The accident happened on Wednesday night, for 2 days, I uploaded documents and made a lot of calls to the policy-bazaar, and then the weekend came, I was told insurance folks don’t work on weekends. Finally, on Tuesday (2nd March) a surveyor was allotted. I took the vehicle to the service center, met the surveyor, he took some photos, and left. I too handed over the vehicle to the service center and left. The service advisor promised to call me the next day when he has dismantled the rear and give me an exact estimate of the damage.

Meanwhile, I did research online and found that many of the parts mentioned in their estimate were 16-17 times the actual cost of the same parts in china. After 2 days, I was called to the service center, the service advisor showed me the internal damage and told me the clear estimate will take another few days. Below is the image of internal damage.

Notice the parts numbered 1,2 and 3. All 3 of them would need to be changed: This is how it looked from the outside: I didn’t care much about the metal parts, since depreciation would be 0% only (in case of fewer than 6 months old cars), I only was worried about plastic/fiber/rubber parts. He told me that both side bumpers would need to be changed, even though there is no damage to the right-side side bumper, since side bumpers are fiber welded to the rear bumper.

Finally, on Friday, 5th March, he shared the final estimate with me. The total estimate was about 6.5 lacs INR.

I went to the service center on that day itself and looked at parts in detail which needed to be changed. Attaching below the almost final estimate: All the items are marked P/M to mention what would be considered plastic and metal. For metal, there won’t be any depreciation since the car is new (less than 6 months), and for plastics depreciation, I am expecting 50%.

Here is a photo showing prices of all external parts which I came to know during the estimates provided by MG: A piece of shining fiber costs 46K. The rear shining bumper, which holds the exhausts in place, is priced at 46K. Probably it’s mixed with gold to bring that shine. Or maybe it’s the price of the extreme level of engineering that has gone into placing the rear exhaust in it. Here is a pic showing complex engineering, you may not get it though since it’s too complex: Non-functional dummy fake exhausts cost 34k each. You just saw how it’s fixed to bumper trim. Here is another view of the fake exhaust from inside. Though I don’t have to pay for it since it’s a metal part. If the insurance company end up charging me 5% salvage on metal, that (0.05*34k=1.7k) will probably cover its entire actual cost: Here is a GOLDEN TIP: Just get a rearguard installed if you own the Gloster. Because at the price of just the bumper trim, you can buy a whole motorcycle, and it might break it in two in a minor road accident. Two sensors sockets, both broke. Taking a new socket and inserting wires into it is out of scope for service center works.

Similarly, need to change boot door open/close sensor for 34K since a wire has come out and it cannot be fixed back. This sensor tells if the boot door is open or closed in the driver dashboard. It was working fine though until I gave the vehicle for service (visible in the video I created). Apparently, it was just dangling inside the socket but it was loose due to the accident. It might have moved from the place due to the accident as evident from the tape’s condition with which it was attached. Here is the pic, see the wire: 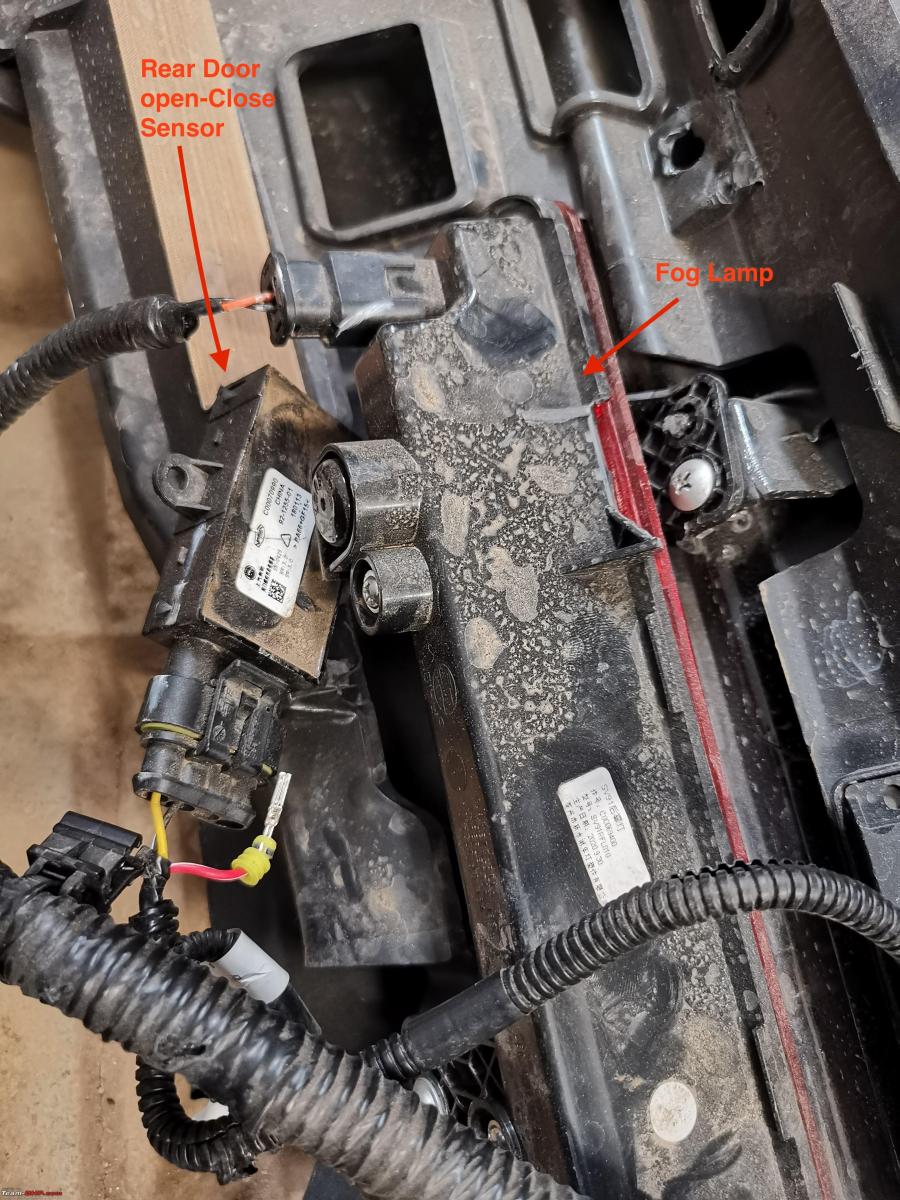 I tried to reason about the cost of these spares with folks at the service center, but my final understanding is, they are helpless as these are MG’s rates and they are just franchises.

Apart from the above quote, there are some accessories which I need to worry about, the rear guard and the chrome garnish below the GLOSTER badge, would cost me about 7-8K. They are going to try and re-use the corner protectors and bumper reflector accessories. Also the taillights, I have been told they will try to reuse, as well as the MG logo. Thankful to them for that.

The insurance surveyor is expected to visit the service center today and review the final estimate. After that, email communication will be initiated, between MG, Insurer, and me, where the purpose will be to take insurance approval in writing. Post that, I will need to make 75% of the total payment(about 5 lacs). Then service center will order parts and start the work. I expect I am not going to get my vehicle in the next 10-12 days at least.

Measurement of chassis and alignment

They are waiting for measurements from MG. Post that it will be clear if there is any major damage to the chassis and if it’s there, if that can be fixed via pulling or some other fixes are required.

Once I get delivery of my vehicle, I will need to get on another long journey, to get a refund of my money.

I will provide further updates as they happen.

Thanks to bark1234 again. Check out BHPian comments for more insights and information.