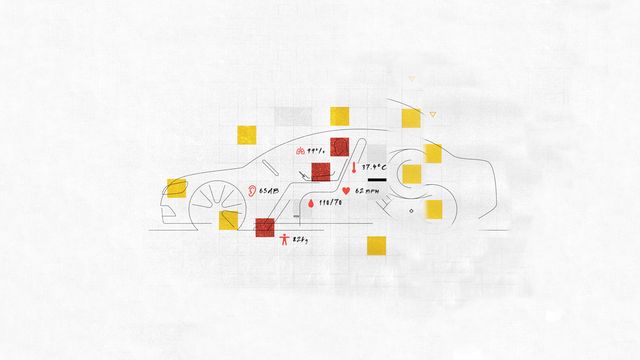 We’re not yet at the plug-into-a-machine Matrix part of the future yet, but maybe we’re not as far off as you think. Lexus is working with TED Fellows, part of the TED Talks consort, to make traveling in autonomous cars less stressful and to “explore new human-centric ideas for an autonomous future with visionary experts in their fields.”

TED Fellows and Lexus created two videos to envision what this means. The first is called “Predicting Human Needs with Neuroscientist Greg Gage” and the second is “Building Community with Artist Sarah Sandman.”

Gage envisions an autonomous vehicle that will be integrated into how the driver feels, using non-invasive technology. For example, the car could read your facial expression, body temp, timbre of your voice and even your heartrate using the seatback. If you’re sleepy, the car could lean the seat back and dim the lights. If you’re stressed it could silence the radio. “Relaxed? The car could cue up a chill playlist.”

Artist Sarah Sandman sees something a little different. She wants an autonomous vehicle that acts like a glass-viewing car on a train. Sanders imagines a terrarium-like vehicle with seats that swivel both inward and outward. It could be the place you play games or have breakfast before dropping the kids off. It could also feature living plants, a digital fireplace, it could mimic a cozy café.

Sandman also sees how most people are stuck in their digital devices all day, and wants to bring back the friendly hand wave. The glass box vehicle could have a speaker system for interacting with cyclists and even a chalk-writing system able to leave custom messages on the street. She’s also proposing a cooperative ownership model, which would work any time, except in a pandemic.

This–at least Gage’s version–opens up a ton of issues. For starters we don’t even know how far off real autonomous cars are. It reminds me of this scene from the tech company data mining episode of one of my favorite shows, Parks and Rec.

“As you know, the cameras on your phone are always on whether you’re using them or not!” Matty said. “This app uses facial-recognition software to track your expressions. It’s always watching!” he said happily.

“What do you do with this information?” Leslie asked.

“Well, if the camera senses that you’re in a bad mood,” answered Roscoe, “then we can geo-match you to, say, the nearest cup of sweet pick-me-up java! But if you’re in a good mood, we can geo-nudge you to, like, a sweet coffee shop! We can just keep the good times rollin’!” 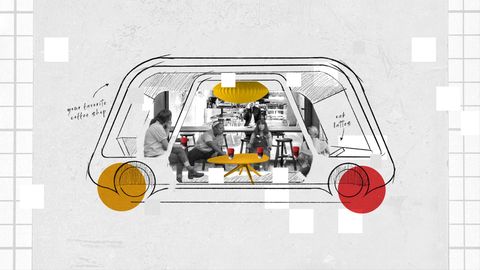 Data is good for knowing what your customers want, sure, but it’s also an extremely valuable commodity. Even randomized, we’re talking about being able to put a pattern to a human’s physiological reactions to inputs. At first you might be able to turn the system off, like a stop/start system, but eventually, either for safety or efficiency, they become undefeatable.

Now, Sanders version we can get behind. With a glass box, the nausea some people feel in the back seat, or when reading, would be easier to handle. I was always told to “look at the horizon” when I was feeling ill as a little kid and if the walls are all glass, or some form of super-strong Plexiglas, it would be easy. However, I could see the calling out to pedestrians and leaving art on the road functions being heavily abused.

To be clear, we are still a long way off from full self-driving cars, but starting to get a handle on the things we might need once we get there is not a bad way to spend time and money for Lexus. But no racing video games in the car. I tried that once, it did not go well.