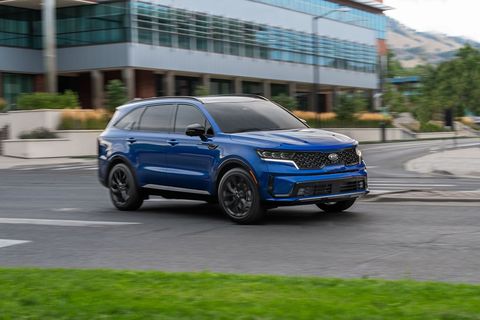 The Kia Sorento has been a staple of Kia’s lineup since the crossover debuted in 2002. The Sorento has chugged along through three generations, with the most recent variant rolling in 2015. Kia planned for the global reveal of the new Sorento to be at the 2020 Geneva motor show, which, obviously, had its problems. Now, we’re finally seeing the U.S.-spec Sorento in all of its three-row glory.

The new Sorento rides, predictably, on a new platform that is lighter than what underpins the previous generation. The 2021 Sorento also will come with several powertrains (including two hybrid variants), new safety tech, a new top-of-the-line trim, and new consumer tech to make your life easier. 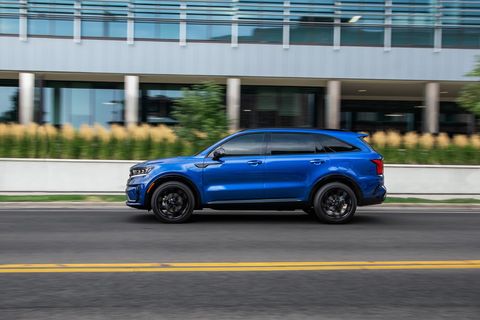 When you pop the hood, you’ll see one of three engines: a 2.5-liter naturally aspirated inline-four, a 1.6-liter turbocharged four, or the top-level a 2.5-liter turbocharged inline-four. The 1.6-liter four-pot powers the Sorento models that bear hybrid badges. Both of these engines are mated to a six-speed automatic transmission and make 227 hp in standard hybrid form or 261 hp in plug-in hybrid models.

The non-hybrid models get the 2.5-liter and make 191 hp and 182 lb-ft of torque when naturally aspirated and 281 horsepower and 311 lb-ft with a turbocharger. Both engines are mated to eight-speed automatic transmissions. If you’re wondering where about the V6’s numbers, well, you might be disappointed to hear that the 3.3-liter V6 didn’t make the jump to the 2021 model.

As you might imagine, the Sorento can be configured with just the front wheels pulling you along, or with all-wheels doing the work. Both non-hybrids are available both ways. The hybrid is only available in front-wheel-drive trim. And the more powerful, plug-in-hybrid comes standard with all-wheel-drive.

The big question with hybrids always revolves around fuel savings, and Kia has some estimates. Kia claims that the standard hybrid Sorento should get 39 mpg in the city, with 35 mpg on the highway. Kia has yet to release fuel economy on the plug-in version but does mention that it can drive for 30 miles just on its 13.8 kWh battery. 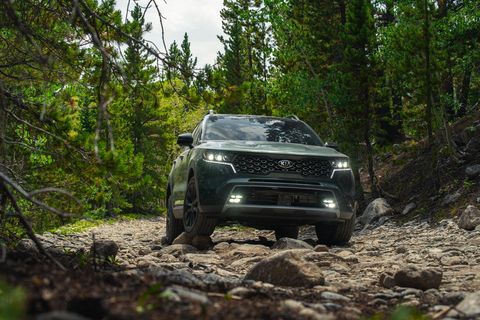 Of course, the new Sorento is more than just a series of new powertrain options. The 2021 Sorento is also stuffed with new tech. On the inside, drivers will get to look at Kia’s new 12.3-inch digital cluster, which you’ll likely see make its way to the rest of Kia’s SUVs with time. Kia also offers a 10.25-inch touch screen infotainment system if you think that the 8.0-inch screen is too small. The larger screen also brings haptic feedback buttons and multi-connection Bluetooth along for the ride.

Kia’s UVO link system also throws a handful of fun, connected-car features into the technological mix. The system offers connected routing, which uses a cloud-based route calculation system to give you the optimal GPS route. The system also has connected weather, which provides information for over 25,000 cities. Of course, there are also features like remote start and digital personal assistant speaker systems like Amazon’s Alexa to remotely start their car.

Wrapping all of this up is a body designed at Kia’s studio in Irvine, California. You might see some resemblance to Kia’s popular Telluride: namely, at the 2021 Sorento’s nose. The Sorento sports Kia’s “tiger nose” styling as well as “eyeline” daytime running lights. It’s worth noting that the Sorento will also come with standard LED headlights to help light the way. 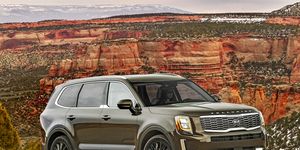 Kia is breaking the Sorento into plenty of different trim levels to hit different price points: LX, S, EX, SX and SX-Prestige. Adding to the mix is the lifted X-Line SX Prestige, which increases the ride height to 8.3-inches and nets you a new bumper as well as a few other styling options.

You’re probably wondering about the cost. Well, Kia says it will release pricing closer to the new Sorento’s expected launch later this year. That said, we don’t expect the new Sorento to be a huge departure from the current model’s price.

Sure, we expect a small bump to the bottom line, but this hotly competitive market means that you’re probably going to get even more bang for your buck. That said, we would expect L-badged models to start around $28,000, or about $1,000 more than current models. 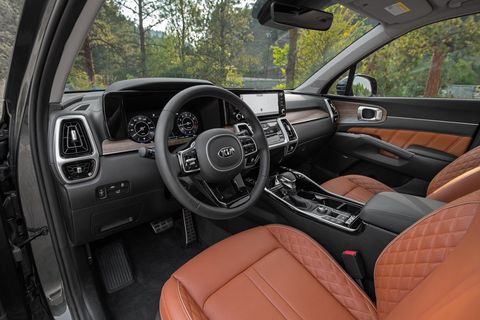