The design of the next-gen Honda Civic has been pretty much revealed via patent renderings. It exhibits more conservative styling, a surprisingly long nose and a spacious cabin. Perhaps the most significant change to the U.S. lineup will be the absence of a two-door coupe, large numbers of which had populated our roads seemingly just yesterday.

The 11th-generation Civic is set to be offered stateside solely as a four-door hatchback, adopting a coupe-like profile, and as a traditional four-door sedan. The wagon, meanwhile, has not been offered in the U.S. for so long that we barely remember what the last one looked like. (It looked great, by the way).

But what about the Civic Type R?

Using the patent images and spy photos, Civic XI Forum has created a series of renderings of just how the next-gen model could look like, given the changes in design.

While the set of images from the front shows a fairly tame version of what the next-gen Civic could look like, the renderings from the rear show a more aggressive set of vents, which certainly look fun but may not materialize in the actual product. 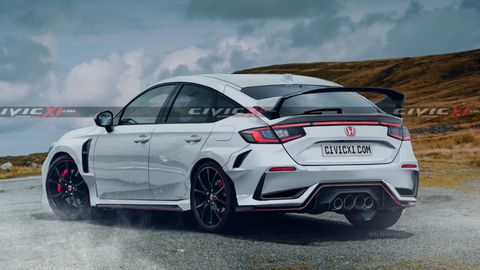 The renderings do show the new fascia of the car, which was revealed in some detail in the patent images that were discovered last week. Of course, this angle does not quite show the flat, blunt nose of the planned Civic, which should be one of the bigger changes headed for the sedan and the hatchback.

Speaking of the hatch, a Type R wouldn’t be a Type R without a giant wing attached to the hatch, and this is one detail that has already been seen in spy photos of the real thing. What we haven’t seen evidence of in spy photos are the quad exhausts which look very impressive in the rendering, but may not quite materialize as imagined here. The current Type R gets by with three pipes for its soundtrack.

We should see the next-gen Civic in the second half of 2021, so there is still some time for more spy photos of the Type R to surface.

Visit the Civic XI Forum for more spy photos and renderings of the next-gen model.

And let us know in the comments below what you think about these renderings.