I stood dejected, staring at my garage floor. Or rather, the quarts of oil from my new-to-me 2007 BMW 335i staining it. I gazed into the car’s eager face, like a puppy proud of its first poop, and asked “why now?” On my test drive it was powerful, smooth, and refined. The headlights turned with the road, the stereo was ridiculous. It sold itself to me. Now, not so much.

Chris Rosales is an author at Car Bibles, a coming-soon sister site to The Drive focusing on automotive adventures and DIY tips to help you get the most out of your car. This post is his answer to the prompt: “Tell me what you learned from a terrible wrenching mistake.” 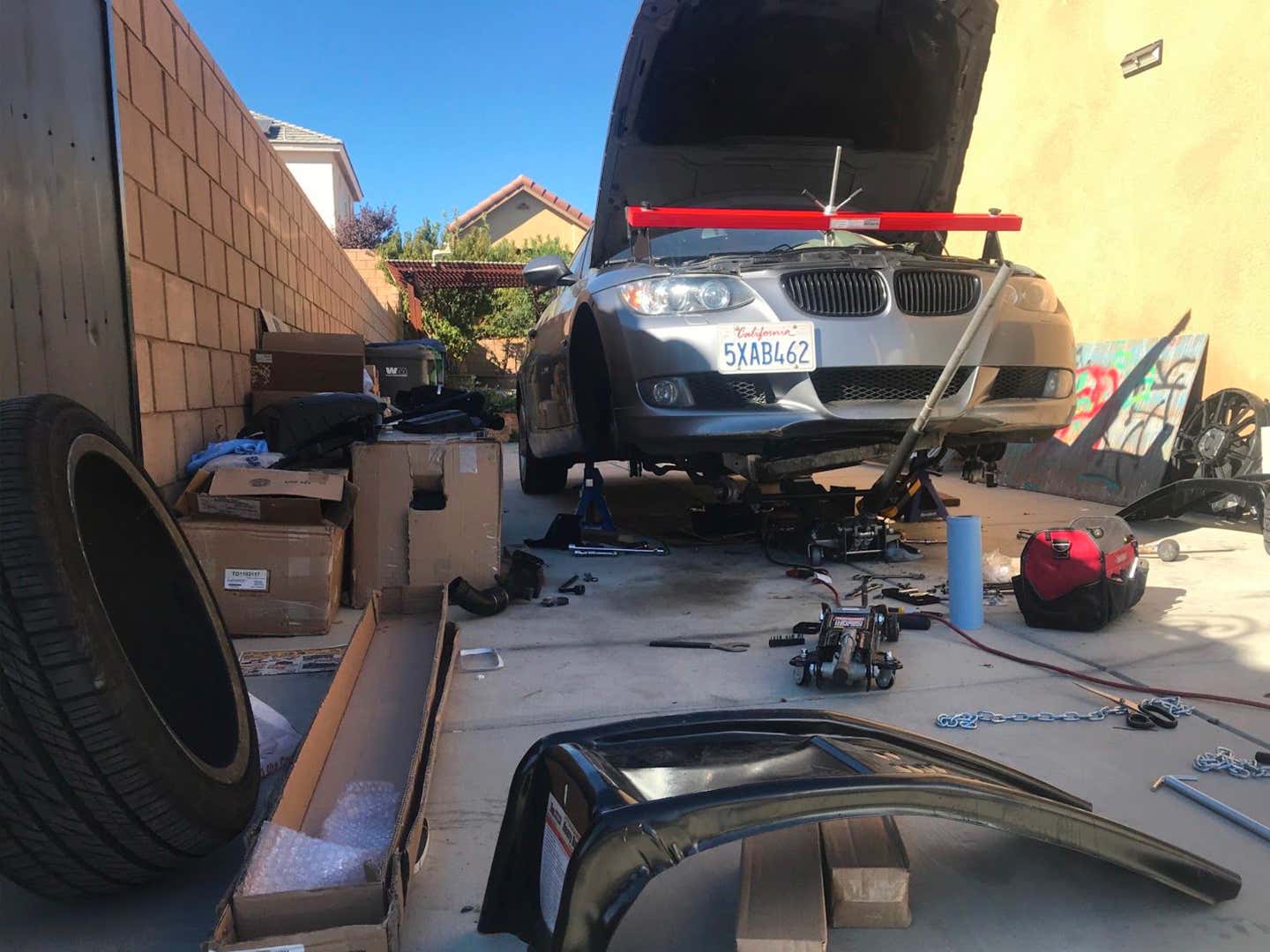 Sixteen hours earlier I’d stood in a cold Chase bank parking lot in Calabasas, as the car’s previous owner, an Evo man, pulled in with the machine that would dominate the next seven months of my life.

My friend that had given me the ride to the deal turned and looked me full in the face. With resolute conviction, she said: “This is a mistake. You don’t need that car.” I, less confidently, said, “don’t worry, I can handle it.”

I handed Mr. Evo Man 6,400 of my dollars, signed the title, and drove my new twin-turbo BMW home.

Later, as I lay under that same BMW, elevated on jack stands with its oil pan off and subframe leaning against my house, I thought back on my friend’s prescience and wished I’d taken advantage of her wisdom. “Minor oil leaks” described by the seller turned out to be accurate. They were indeed minor. There were just… a lot of them.

Many minor oil leaks became one gargantuan mega-leak, and two enormous oil stains on my parents’ property. Initial diagnosis led to oil pan gasket failure, a classic BMW trick. Once I had removed the car’s filthy undertray, I found a leak from just about every rubber sealing surface on the engine.

Initially, I replaced the oil pan gasket, and the oil filter housing gasket. That filter gasket alone can lead to critical failures in this car, but that’s a whole other story. I found rubber in the oil pickup and could not figure out why – turned out to be front main seal material that was damaged by the oil-saturated serpentine belt. I put a new belt on and hoped it would work well.

Naturally, I made the brave and idiotic decision to drive the car to school, a 68-mile round trip. It still leaked, but it was somehow manageable, or I was delusional. It survived the rainy, sideways, canyon drive. I parked it and ignored the rainbows in the wet pavement beneath my car. Actually, yeah, I was just delusional.

After class I took a friend home. As I made a U-turn to depart, I noticed a steady trail of dark drops following the exact path my car had just taken. I stopped, popped the hood, and found coolant spraying from a small gap in the upper radiator hose. Defeated, I asked my friend for parking for the night and managed to get a ride all the way home.

I have never been left stranded by a car before, so this kind of humiliation and defeat were new feelings to me. Clearly, I had to reorganize my attacks. I returned the next morning with tools and a fresh $150 hose from BMW. And sadly, that price isn’t a typo.

You see, the job on its own is a difficult, finicky thing. The bottom of this hose is attached to an arterial electric water pump that these cars love to destroy. The top is bolted in the head with almost zero space for a socket. And what really catapulted this job into legendary levels of stress for me was the cleanly trimmed, picturesque Santa Clarita neighborhood the car chose to have a lie down in. Bridgeport Estate residents don’t take kindly to vigilante mechanics in their streets. For the duration of the repair, security guards were breathing down my neck, urging me to leave.

A stressful hour or two later I had the car repaired and on its way home. It promptly broke again, right before work. I went to use my snazzy push-to-start and click-click-click. The starter had failed. It lived beneath the intake manifold, is incredibly difficult to remove, and reduced me to a bumbling shell of a man. Meekly, I went inside, deposited my BMW key, and retrieved the Ford key in our drawer.

I was reduced to driving my Dad’s pizza van. 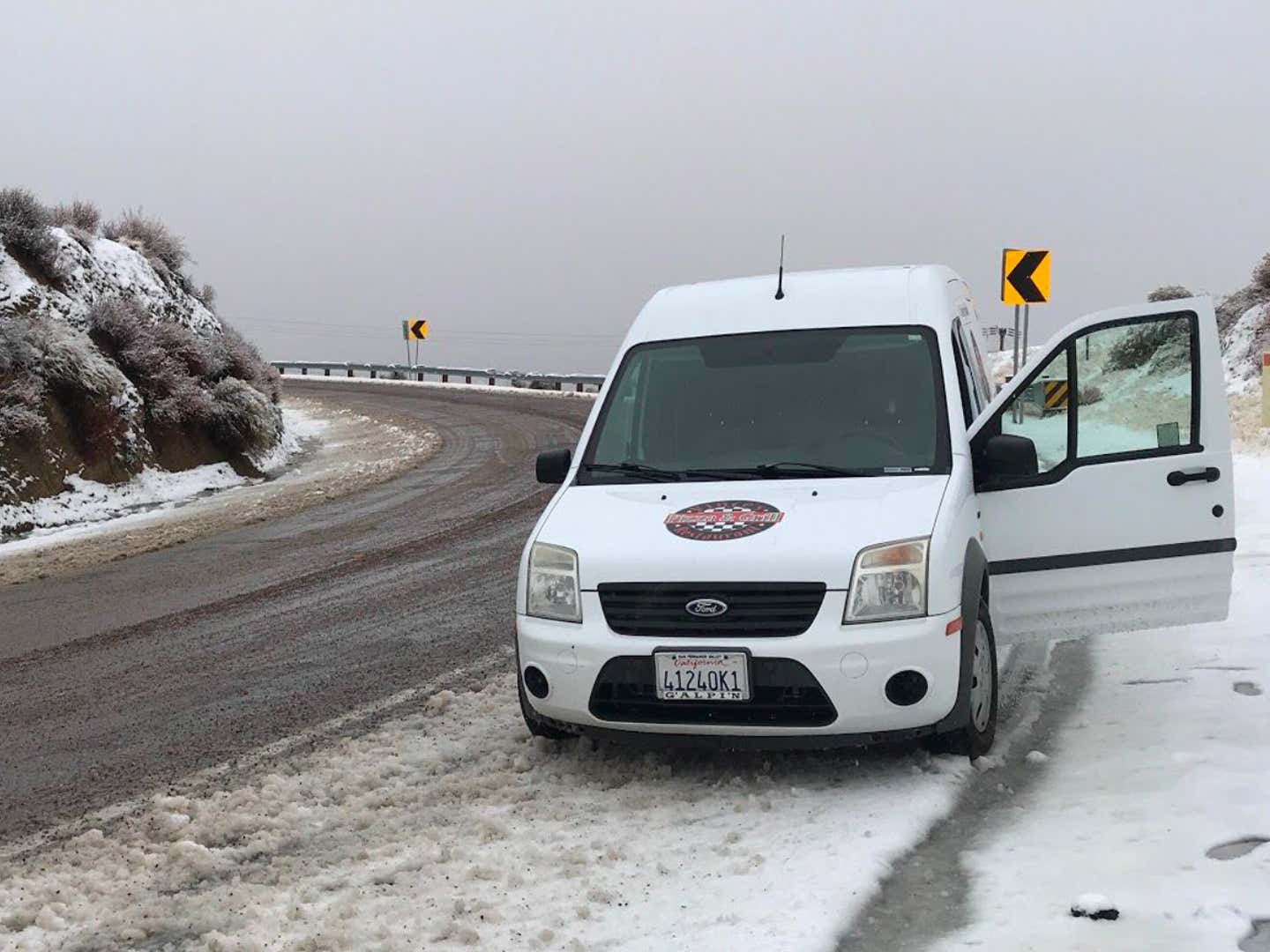 I drove the van for a week until my starter arrived. The low-budget luxury car lifestyle is a painful one, as you might have guessed. I didn’t buy my BMW for the badge or clout, but because I loved my 2003 330i ZHP so much that I’d hoped this car would be the same solid, smooth, balanced, and powerful one-car solution that BMW is so well known for building. But, of course, no car likes to be neglected and high-end hardware is especially susceptible to mistreatment.

After the starter failed I listed the car for sale. Nobody’s eager to admit defeat, but sometimes it’s better to cut losses and barf when you realize you’ve bitten off more than you can chew. I took a decent loss on the car when I sold it, but it was out of my life. I never got to properly drive it hard. The one time I attempted to, the car smoked so much I was convinced it had caught fire. It was a disastrous shitbox.

Great deals, especially with Euros, are almost never what they seem to be. I really should have run away when I learned about the leaks from the seller, but I decided to tackle it head-on, and not inspect the car properly.

In fact, every time I’ve bought a car since, I’ve asked the owner if I could put the car on jacks and take a good deep look underneath.

Generally speaking, cars that cost $50,000 new will still have the servicing appetite of a luxury car. Unless, maybe, it’s a Lexus. Maybe I should have bought one of those fancy Toyotas. Instead, I bought a turbo Subaru.

Chris Rosales is an author at Car Bibles, a coming-soon sister site to The Drive focusing on practical tips and DIY advice to help you get the most out of your car.

Look for a freshly redesigned Car Bibles in early 2021. Meanwhile check us out on Twitter, IG, and Facebook. Actually, LinkedIn too, if you’re on there.