Sony’s Gran Turismo 7 has commanded headlines recently, first for bringing the classic GT experience to a new generation of consoles, then for completely changing the overall balance of the game post-release and after it was reviewed. An update that was pushed over the weekend reduced race win payouts, making it substantially harder to repeatedly win events to earn bulk sums of in-game cash and purchase cars. The game has a method to buy cars with actual, real-life money, but cars such as the McLaren F1 cost upwards of 18,000,000 in-game credits, which means almost 200 actual dollars at the current pricing of $19.99 for 2,000,000 credits. To earn that car with in-game toil, it would take upwards of twenty hours of racing, easily.

Players have responded with ire, bombing the reviews of GT7 on Metacritic into the high ones on a scale of ten, an unthinkably negative score for one of the most beloved Playstation series of all time (the previous lowest-rated installment was Gran Turismo Sport, with a 6.1 user score). As a long-time enthusiast of the series myself, the anger is understandable. Gran Turismo 4, my introduction to the series in my middle-school years, was not just a way to play away rainy days; it permanently reshaped my understanding of car culture, and the feeling of having its fundamental mechanics played with to encourage real-world spending feels downright disappointing. Microtransactions seem to be now built into Gran Turismo’s revenue model. 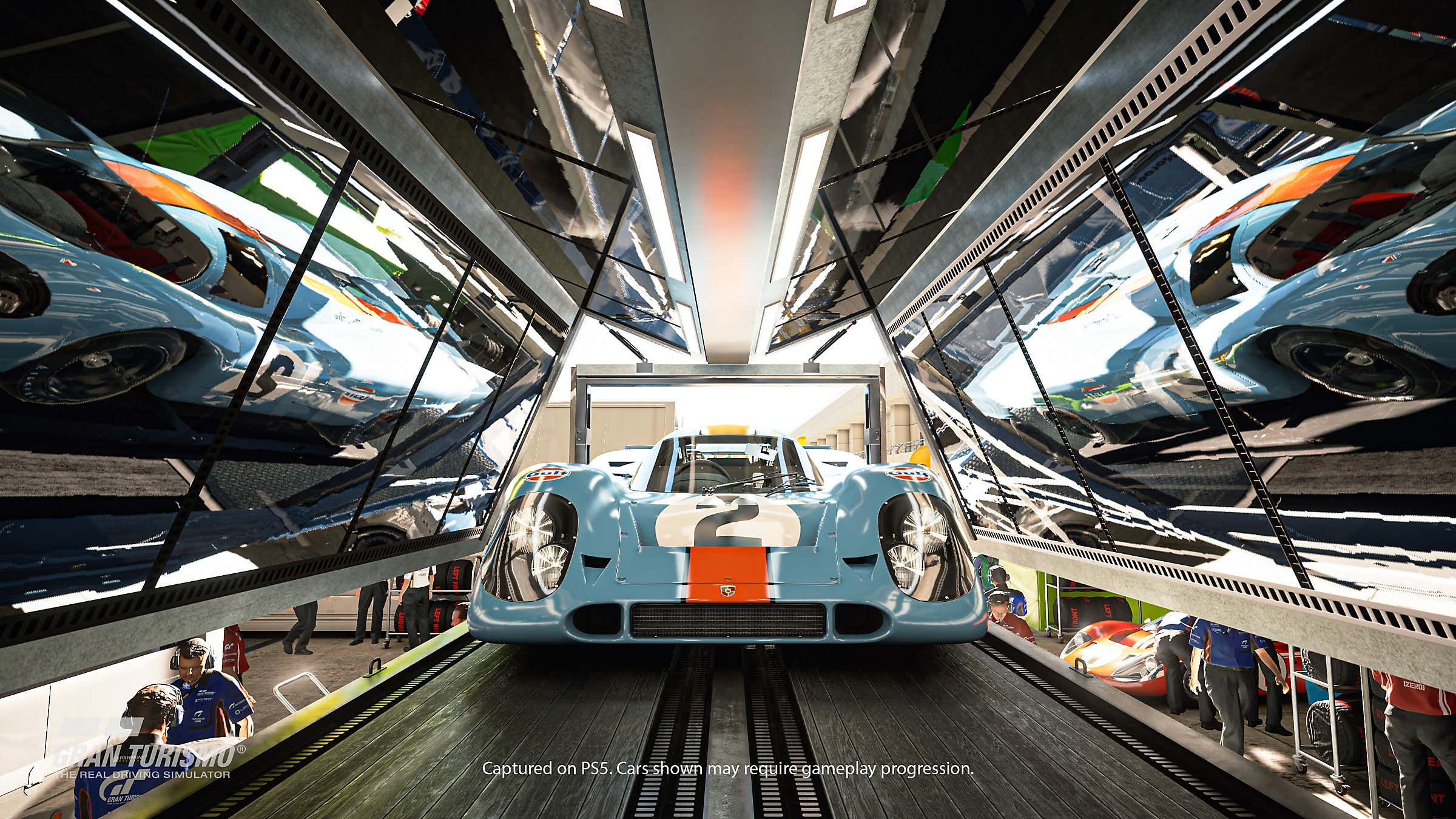 Polyphony Digital CEO Kazunori Yamauchi responded publicly to the criticism on Friday after the update was rolled out. In it, he said, “I want to make GT7 a game in which you can enjoy a variety of cars lots of different ways, and if possible would like to try to avoid a situation where a player must mechanically keep replaying certain events over and over again.” While the sentiment could be appreciated in a vacuum, it’s obvious with some context that Polyphony just made grinding worse by making it take even longer to earn the same amount of credits. The only way that “situation” Yamauchi described could be avoided is to spend real money on fake cars.

And if the goal was simply to discourage endless re-races of the same event, there are definitely examples of racing games that discourage grinding without needing to spend real money on in-game credits. The Forza series is an excellent modern example that embodies the antithesis of the grindset; the newest installment of Forza Horizon gives you three cars immediately after beating the tutorial races and continually showers the player in money and prize cars. While it does feel less rewarding to be handed prize after prize completely independent of on-track performance, it certainly eliminates most of the need to grind when random wheelspins can net you cars worth tens of millions of credits. If Yamauchi really wanted to eliminate the grind, that would be an easy way to do it.

Deeper than that, though, is that the grind is part of the long-running series’ inherent charm. Gran Turismo games have always eschewed the easy way out or random chance bestowing you with a good car; look at the legendarily difficult license tests or the punishingly hard GT4 Driving Missions, the last of which is considered by many (including myself!) to be one of the hardest events in any racing game ever. When Gran Turismo encouraged you to grind, therefore, it didn’t feel out of character or unusually punishing; rather, it fit the tone of the game and made the hard-earned contents of your garage feel vastly more meaningful.

I lost count of how many times I drove through Costa di Amalfi in the special events selection of GT4, winning and selling the Toyota Raid RSC Rally truck (worth about 220,000 credits, won in two simple races!) repeatedly, to stockpile cash to purchase rare Le Mans racers. While my garage might be larger in Forza Horizon 5, my garage in Gran Turismo 4 was something I earned. Horizon’s reward system feels divorced from effort; Gran Turismo’s has always felt directly connected to it. 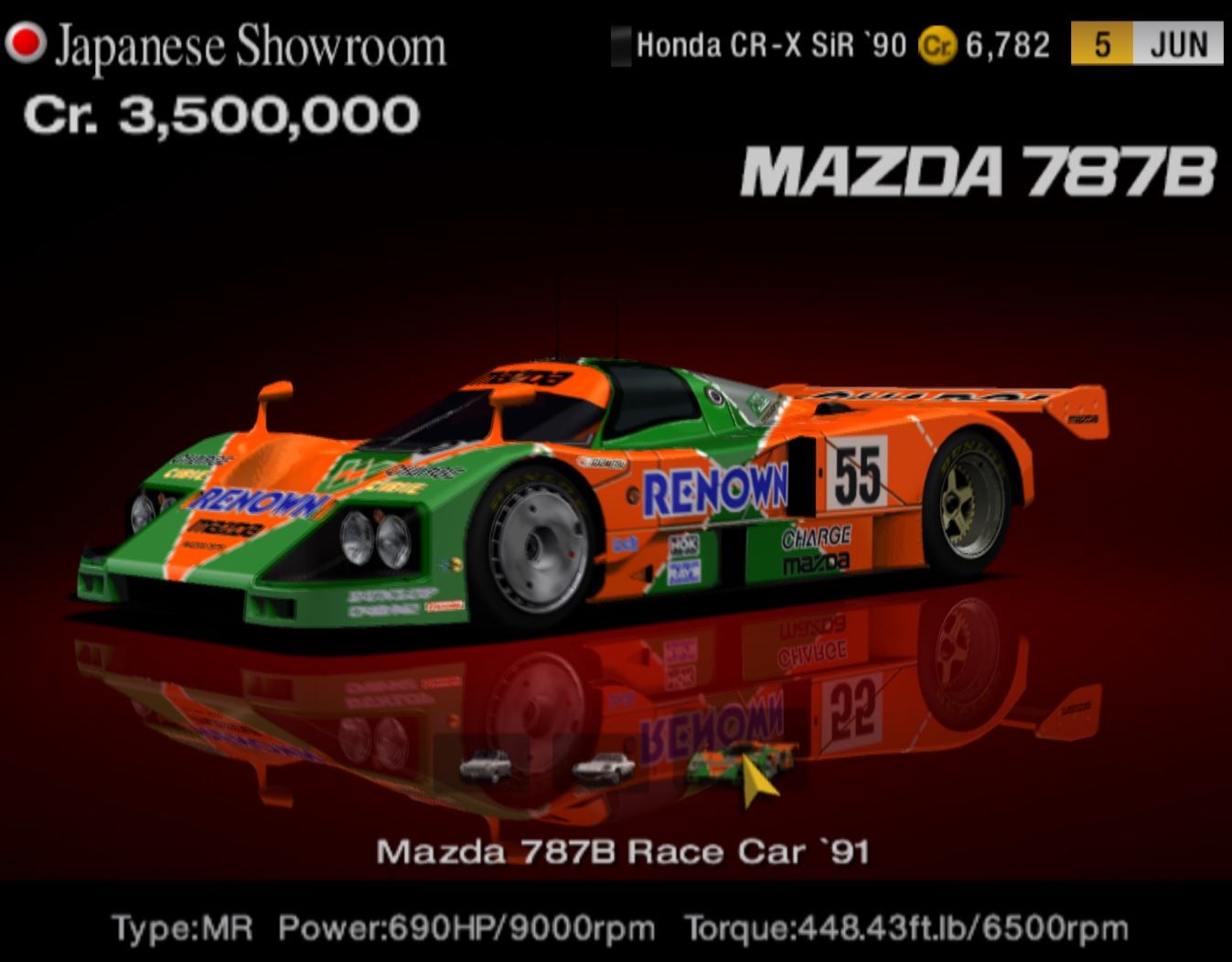 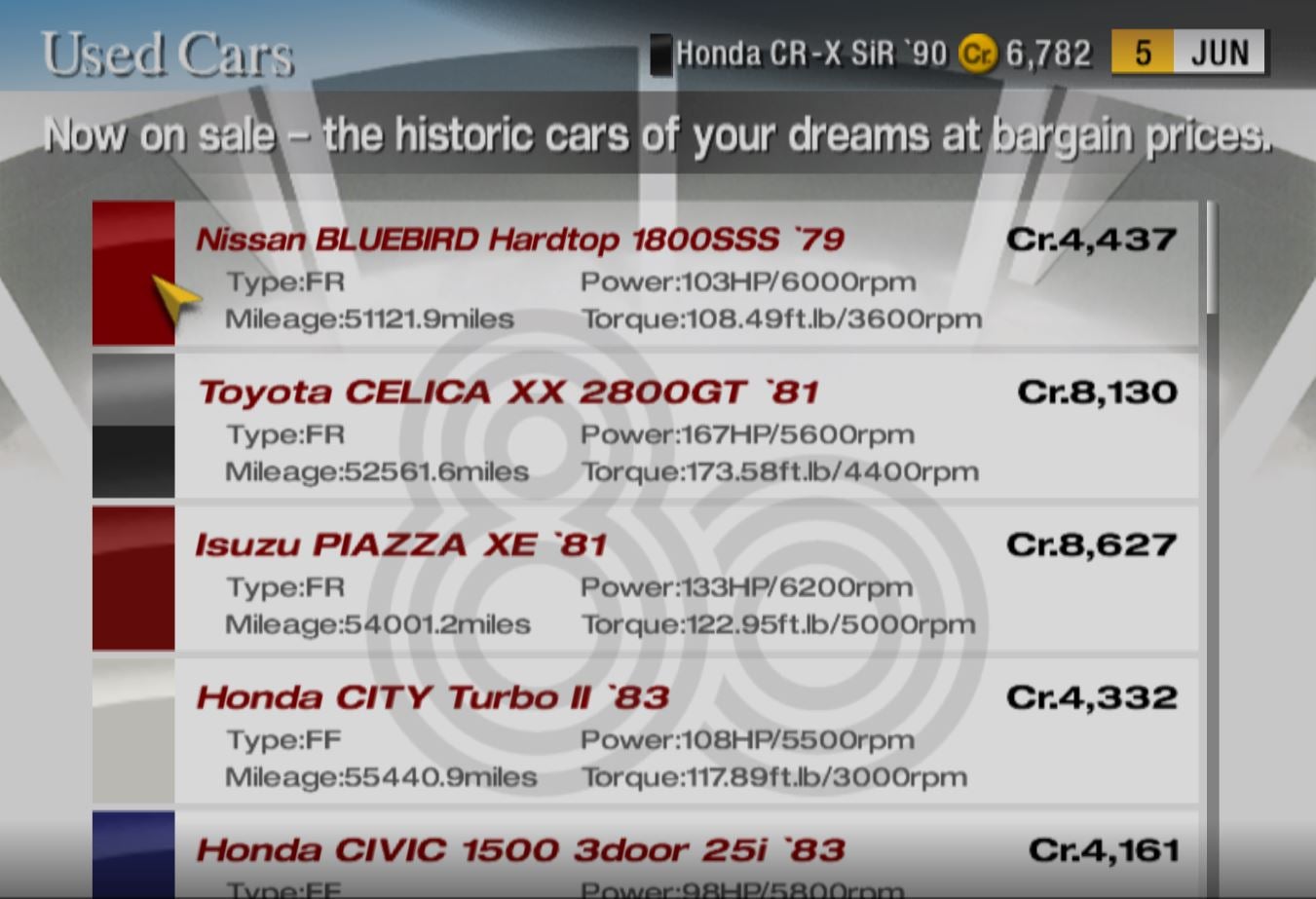 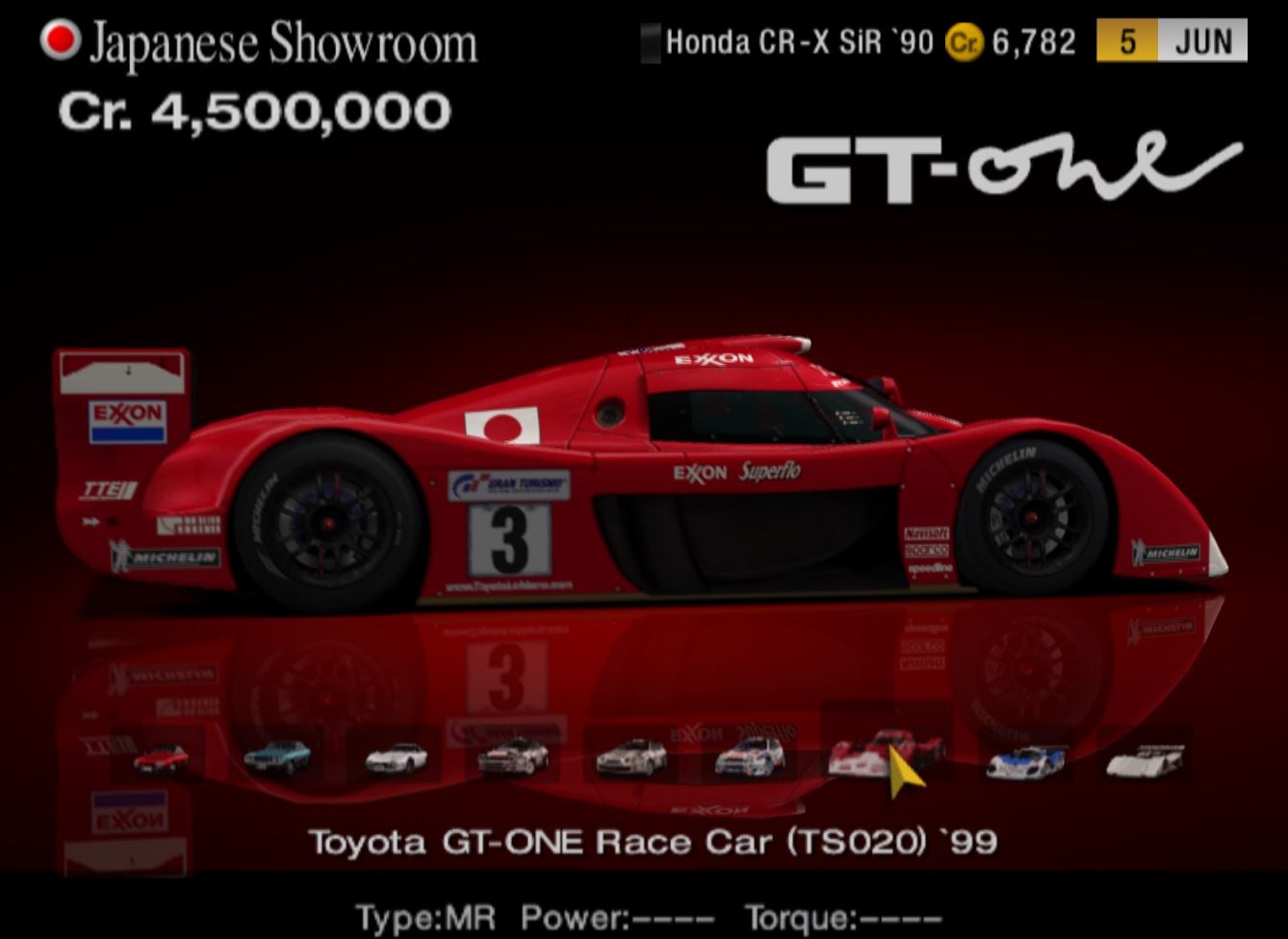 And all of this leads back to one main theme: Gran Turismo embodied the feedback loop that the modern world promised me as a child. If I worked hard, worthwhile results would follow, and the direct payoff made those afternoons spent grinding away memorable. I was not replaying the same track endlessly to win money so I could have a bigger in-game bank account—I was doing it because the outcome would be the ’92 Mazda 787B or the ’99 Toyota GT-One or any of the other medley of cars that I desperately wanted to drive. And the price tags on those cars weren’t there as a means of bragging rights or reflecting real-world valuation; instead, it was a justifiable way in the game to view the perceived value of those cars. The GT-One and 787B were incredibly powerful and owning them unlocked races that had massive payoffs, so of course, they cost more money. The real-world worth didn’t matter; what did was that desirability and progress were linked to trying.

But now, according to Yamauchi, “…the pricing of cars is an important element that conveys their value and rarity, so I do think it’s important for it to be linked with the real world prices.” Why is this important? I cannot call Mazda and order up a 787B for any price, and I truthfully do not care that McLaren F1s are now worth 20 million bucks at auctions. If anything, the real-world inflation of used car pricing is something I look to video games to escape, not to remember.

There’s money to be made, though, and for better or worse, Gran Turismo 7 is reflecting the automotive world we live in. The costs of certain “legendary” cars in GT7 are meant to reflect actual prices because it’s tied to a real-time valuation tool provided by classic car insurer Hagerty, whose business model is implicitly tied to classic valuation and preservation. We no longer live in the egalitarian era of basement-dollar hot rods winning on Friday nights at closed airstrips, shaming cars decades newer. This is the era of having money.

As the long tail of the reasonably used car market finally intersects the rising values of genuine classics, the cheap, attainable cars I used as my introduction to auto enthusiasm a mere three or four years ago are no longer are either cheap or attainable, and their successors are appreciating too fast to ever become a bargain. The classic car market barely trails the S&P 500 over the span of a year, and investors know it. All of this means that the culture surrounding GT7 is a deeply different place than the one that birthed early Gran Turismo games. While Polyphony could have held out against the tide, why fight the entire world when it’s increasingly lucrative to join in along with it?

So while the game of my childhood had a hard-work ethic that rewarded my trials, that era is gone and so are the games it spawned. Most of the people I know in their twenties feel that the economy is rigged against us, whether it’s trying to buy an increasingly expensive home, trying to afford groceries, or trying to buy a car all while our money and our salaries are worth less. Automotive enthusiasm is facing the same problems. It makes sense the game we grew up with feels rigged against us now, too.