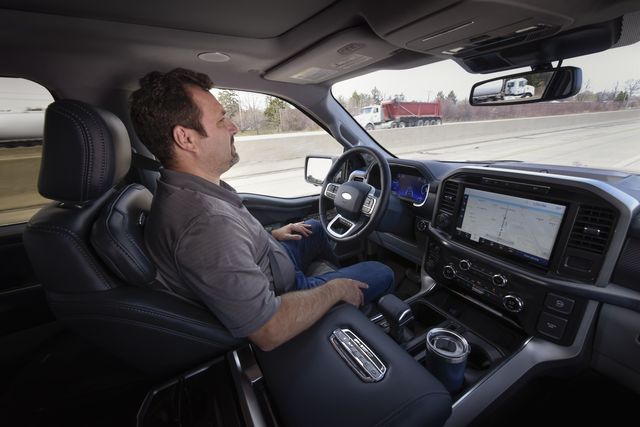 There is a lot of discussion around the terrifying idea of hands-free driving. While automakers still have massive leaps to make before autonomous—or more aptly level-four autonomous—vehicles start trickling into driveways, there are plenty of systems that take some of the responsibility off of the driver’s shoulders. And only a handful of those systems are advertising hands-free performance: GM’s Super Cruise and Tesla’s Full Self Driving are the two most obvious. Ford, too, is venturing into the hands-free driving ring, and we got to experience what it was like.

If you’ve used an adaptive cruise-control system, operating Ford’s BlueCruise hands-free system works essentially the same. The system is limited by a geofence that only lets it operate only on pre-selected sections of highway that Ford calls Blue Zones. With that in mind, when you’re on one of the major highways that fall under Ford’s Blue Zone requirements, you simply trigger the system with the cruise control button on the steering wheel.

You set your speed, and the car takes control from there. Thanks to a handful of sensors and a camera, the system can let you take your hands off the wheel while you’re traveling down the highway.

Unlike GM’s Super Cruise, there isn’t any signal built inside of the steering wheel. The steering wheel is the same as that found in your standard Ford F-150 or Mustang Mach-E. Instead of relying on a more expensive, bespoke, steering wheel for the system, the folks at Ford have baked the BlueCruise information exclusively into the gauge cluster. The system lets you know that you’re BlueCruising by completely replacing the standard gauge cluster with a blue screen that relays your necessary information. The attention warnings are also fed through the driver’s screen to remind you to keep your eyes on the road.

This hands-free operation can be unsettling. That said, while driving down Michigan’s Southfield freeway, the BlueCruise equipped F-150 handled the task of driving better than many of the other drivers on the road. Overcome the initial fear of letting go of the steering wheel and you’ll be rewarded with a pleasant, if slightly odd, experience of a car navigating normal traffic by itself.

BlueCruise is a slightly more limited system than its competition. The system doesn’t perform automatic lane changes or semi-manual lane changes (a lane change where you simply use your indicator and the car moves over). These features will likely make it to Ford’s system with time, but they’re currently—noticeably—absent.

Ford also isn’t expecting everyone to flock to this system when it rolls out later this year. Ford’s spokespeople estimate that around 15 percent of F-150 buyers will opt for the system, and 80 percent of Mustang Mach-E buyers will swing for BlueCruise. Even though only 15 percent of customers are expected to buy their F-150 with this system, that’s still nearly 150,000 trucks rolling off the assembly line sporting BlueCruise.

It’s only a matter of time before these systems start to pop up from other automakers, and until they become more common across the board. The relatively early adoption of hands-free driving, combined with the launch of Ford’s F-150 Lightning, point toward where customers’ needs and wants are going, and Ford is happy to oblige. The only real question left is: How long will it take until hands-free driving is a common feature?

Do you think you’ll ever enjoy a hands-free driving experience? Let us know in the comments below.