Got the springs installed and initially the wheel combo was a definite issue. But I liked the way the car handled post installation.

BHPian blackbandit recently shared this with other enthusiasts.

Its been a while since I updated this thread and today I thought I would post some updates. The car has gone some upgrades, of which some miserably failed and put a dent in my pocket and has completed 70K kms so far. The experience so far has been wonderful and the car still runs like a beast. Have faced no major issues so far touchwood. Apart from regular maintenance have changed the front struts – No issues faced with them but since they were slightly weak and a new pair fairly inexpensive decided to change them before getting the lowering springs installed, Right side engine mount – Failed during my drive back to Mangalore from Bangalore, and the front rotor disks. Penning down all the experiences one by one below.

As part of a makeover, I had gotten the 16 inch Momo alloy Massimo alloy wheels for the car. Now as it has been pointed out multiple times everywhere that 16 inch is kind of an overkill for the Figo, I out of sheer curiosity (more of stupidity) decided to go ahead after seeing multiple photos of Kerala Figos sporting 16inch and also 17inch wheels on Instagram. The wheels turned out to be a disaster within few days of installing. Since they were 7.5J concave alloy wheels, they started fouling with the fenders. At first it seemed bearable but it turned out to be an outright disaster on a long journey. The wheels rubbed against the fender in literally every undulation of the road and gave a heart tearing sound throughout the drive. However, since I had invested a lot in these wheels, got the coil buffers installed on the front springs and solved the problem. But this caused the entire steering and suspension on the front side to act kind of funny and I was not satisfied with the end result. Howeve,r went ahead with this setup for like 2 months when the lowering bug bit me. My funny brain assumed that a stiffer set of springs would be a better result than running buffers to make the springs stiff. Ordered a set of Eibach pro Kit for the car and got them installed. And the immediate result again a disaster. The car sat so low that the wheels had barely any gap now and it was near to not driveable. The dealer of the springs told me to get wheels of 7J or lesser to solve the problem as many had installed the same and faced no issues. There began my quest to exchange my alloys. Finally got a pair of Ecosport alloys which were around 6.5J through and decided to test the same for some time. While the car looked like a monster with these set of wheels they still could not solve the fender rubs. By now, the tyres in the car which were 205/50/R16 Yokohama Earth 1 had their entire sides eaten up. At this point Another person told me to go for 205/45/R16 to solve the rubbing. But here I was fed up and considering that only cheap tyres are available at that price, I decided to bear the loss and ended up purchasing Freestyle alloy wheels from the Ford showroom. Got 195/55/R15 SDrive tyres to complete the same and I have not been happier about the decision. Posting some photos of the alloy wheel saga: As you can see in the above images, the gap is almost non existent. The car in looks amazing in this avatar IMO but it was still plagued with issues.

Got the springs installed and initially the wheel combo was a definite issue. But I really liked the way the car handled post installing the springs and therefore decided to get rid of the wheels and keep the springs. The Eibachs have been a love hate relationship for me. While I do love what they have on offer in terms of handling and the way car takes corners, I do not like the overall comfort levels it comes with. It is definitely on the stiffer side and not a passenger friendly setup overall. But the way it transformed the handling and steering characteristics of the car, and since I majorly drive the car alone, I decided to make peace with the comfort issues. Listing down the pros and cons.

Some photos with the current setup: 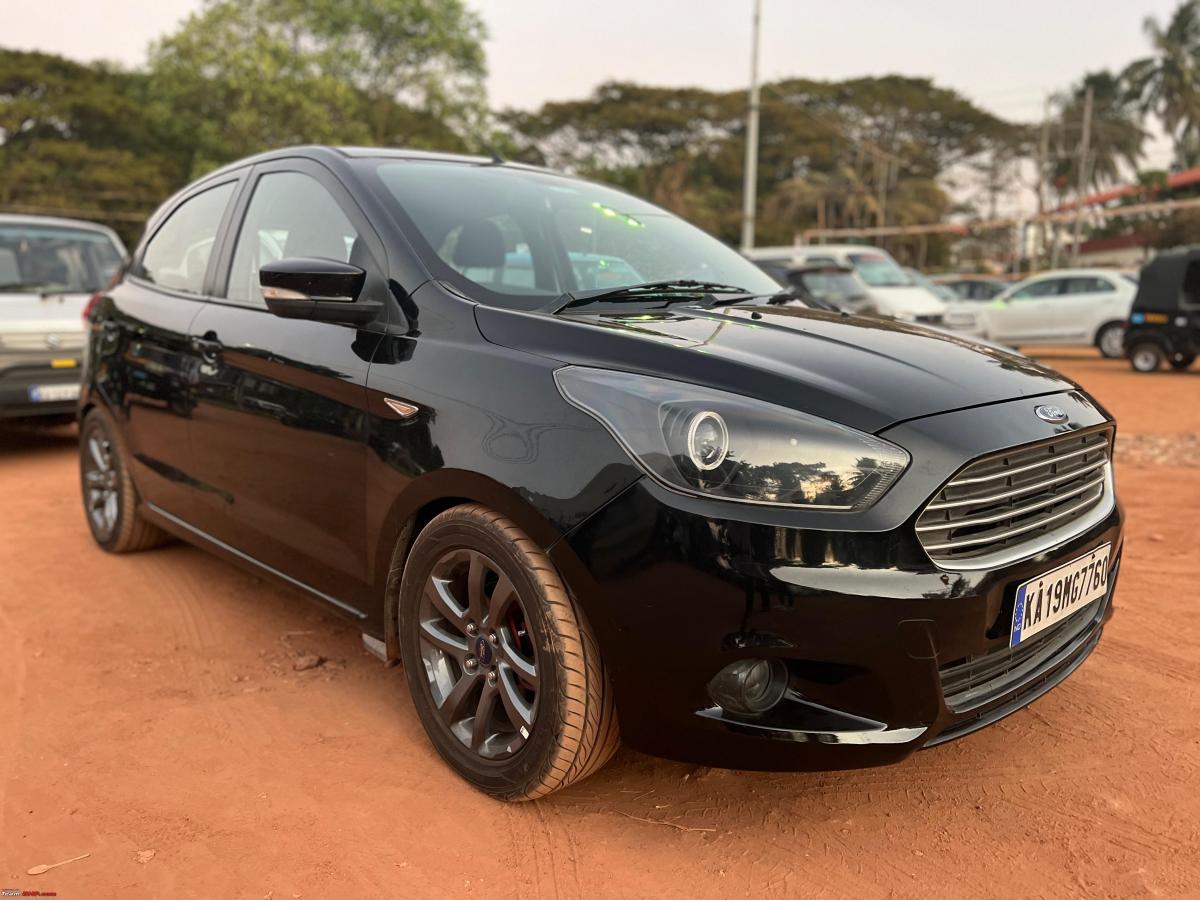 A note on Ford Service:

While my experience with Cauvery Ford Mangalore has been great and continues to be great, I cannot say the same for Cauvery Ford in Bangalore. I had visited them to get my car checked for a weird sound and vibration that had started cropping up. This was when I was running the Ecosport alloys. The person who took the test drive was quite arrogant in his approach. He went ahead and challenged me saying there was no issue with the car, the issue was due to the lowering springs. I went on to explain to him that I’ve been running springs for close to a month now and never faced this sound and vibration and it cropped up recently. He refused to accept my explanation and held his ground. Giving him the benefit of doubt, I got it changed at a nearby garage and the vibrations and sound still persisted so I took my car back. He now told me its the alloy wheels also. I have to revert back to stock to get the sound and vibration rectified. I was due to drive back to Mangalore and owing to his incompetency, I decided to get it checked in Mangalore itself where I know the service advisors quite well. On my way to Mangalore, the sound and vibrations just increased gradually and towards the end of the journey the vibrations just increased to a level where it was horrible. That’s when I realized it was a cracked engine mount that was causing all the issues. The SA in Mangalore asked me to get the car if its driveable and since it was, I took the car in and got it fixed within 2 hours. Props to them. The vibrations had also got the exhaust pipe to split, it probably was already cracked or weak and the SA got it welded at the body shop.

This goes to say that my experience with the Cauvery Ford Mangalore service centre has always been top notch even after departure of Ford. Had an accident in October that resulted in a damaged side skirt, door and tie rod. The car was sent to the body shop and the entire work was completed within 2 weeks and delivered. Work done was also upto my satisfaction. Got my 70K service done recently. Took it early in the morning and it was put in the ramp immediately. The brakes were not doing well and upon inspection the rotors had scored quite badly. Since they were inexpensive, got both the rotors and brake pads changed. And the car was delivered to me within 2 and half hours. The bill also came upto 9k which I feel is reasonable for the work done and change of parts. I also received multiple calls from the dealership as well as Ford enquiring about the status of the vehicle after delivery and if work was performed to my satisfaction. Overall a wonderful experience with them and hope it remains the same in future.