Seldom has a driver walked away from a crash as severe as the one U.S.-based Haas Formula 1 driver Romain Grosjean suffered in the opening moments of today’s Bahrain Grand Prix when he veered off track and drove directly into a three-tiered Armco steel barricade. His car split in half and immediately exploded in flames, the rear end bouncing back onto the track and the front punching a hole through barrier and carrying Grosjean to the other side.

It was as if we’d just watched a man die. And yet, seconds later somehow Grosjean emerged from the wall of fire behind that shattered fence and climbed to safety with the of a track worker. Though he needed to be assisted into the medical vehicle, Haas team principal Guenther Steiner told ESPN Grosjean is doing ok, suffering from minor burns and at least one suspected broken rib. Video of the crash is embedded below.

“It’s a reminder,” understated Lewis Hamilton after he won the race, “that this is a dangerous sport.”

The accident happened midway through the first lap when Grosjean and Kvyat got together. Kyvat kept going, but Grosjean veered right and speared first a thin safety fence, then the triple-Armco barrier. The front of the car went through the barricade, leaving the back of the car relatively intact. Why the barrier failed so spectacularly will be the subject of a “deep” investigation, F1 boss Ross Brawn said after the race, and surely Haas will want to know why its chassis split in half like that as well.

Flames were so intense you could not see Grosjean for a moment, then he emerged from the fire, and attempted to climb over the barrier, back onto the track. He succeeded with help from a helmeted safety crewman. He then walked under his own power, clearly shaken, to an ambulance. Hats off to the Bahrain safety crew, who were on the scene in seconds, thanks to the safety car that follows the field around at back for the very first lap.

At last report, his minor injuries including burns to his feet and hands, and possibly a broken rib. Hamilton pointed out that the relatively new halo, which extends over and in front of the driver’s head in a Y shape, likely saved Grosjean’s life. He’s said to be “shaken up” by the experience, and with retirement seemingly in the cards for the 34-year-old after this season, no one could blame him for calling it quits after that. 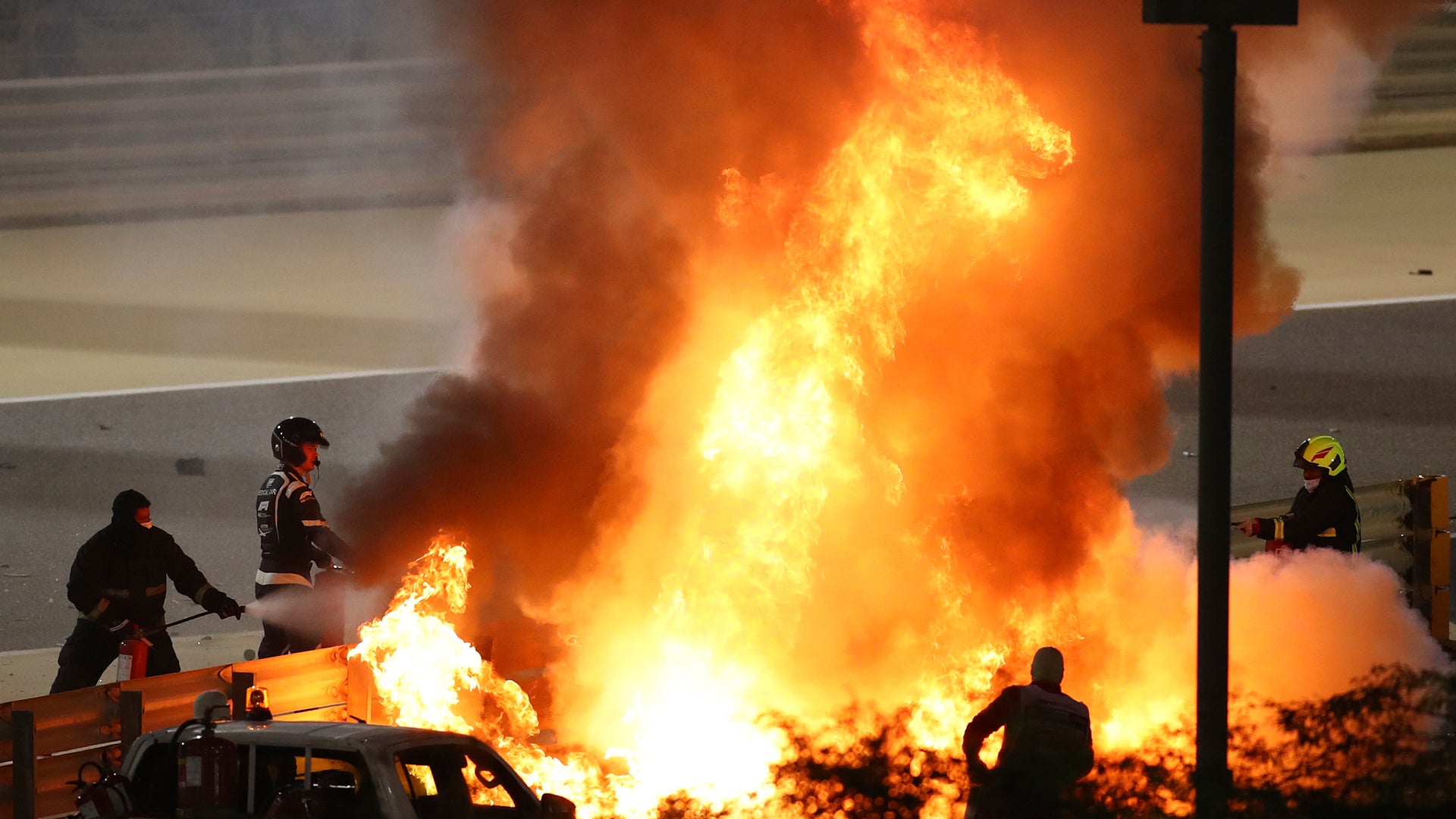 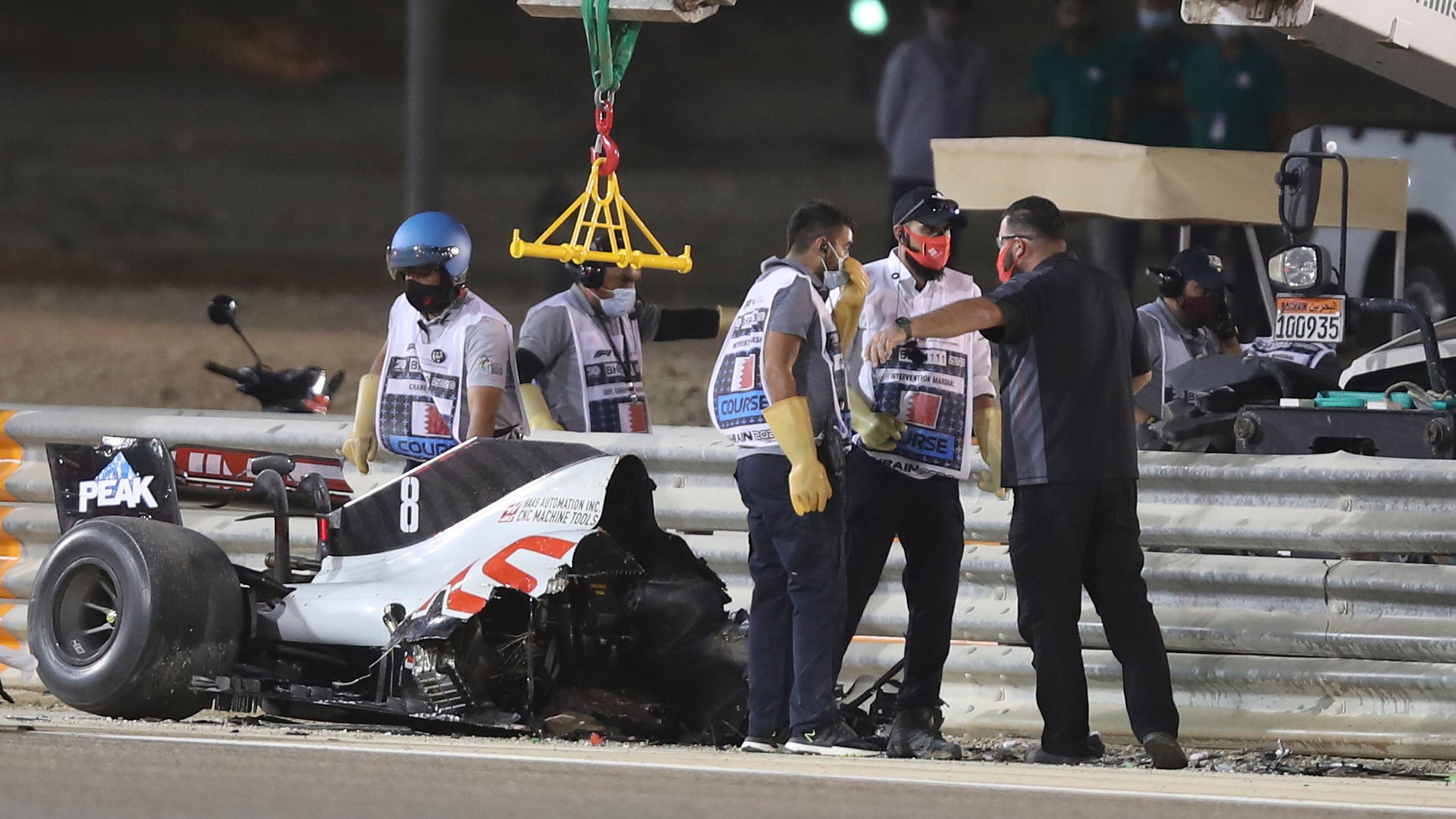 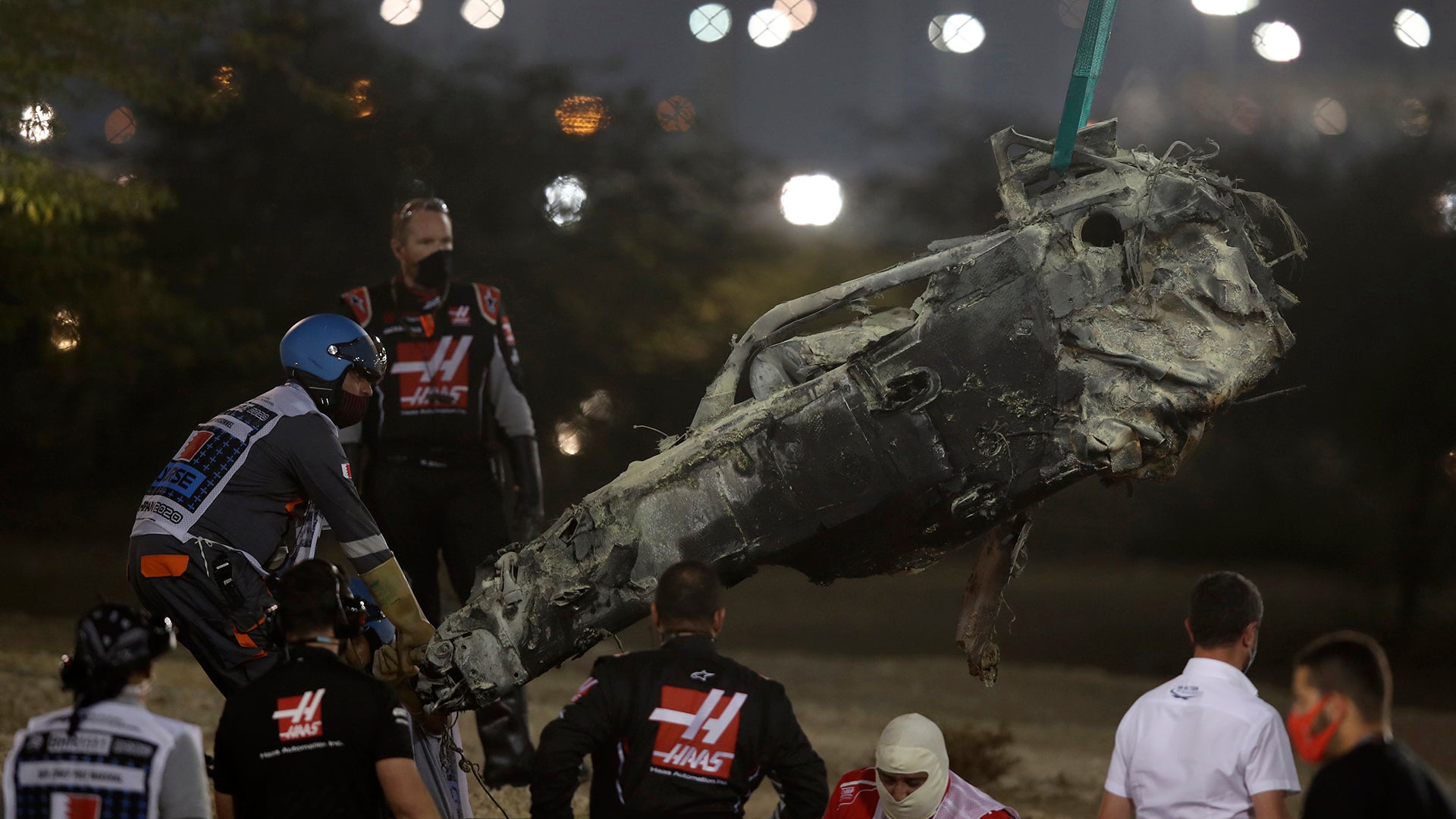 The race was delayed while the barrier was rebuilt and took nearly three hours to complete. As mentioned, Hamilton won, and Red Bull teammates Max Verstappen was second, Alexander Albon was third. Formula 1 returns to the Bahrain track next weekend, then Abu Dhabi to finish the season.

“A tough evening on a number of fronts,” said Haas F1.