Today’s supercars come with levels of power that would have been considered truly insane just a couple of decades ago. To assist the mere mortals that purchase these cars, automakers fit them with systems like traction control and stability control to keep things on the straight and narrow. Unfortunately, modern car culture maintains that it’s a mark of a true driver to disable these systems at the earliest opportunity. Often, what results is embarrassment in short order—as demonstrated by this driver from the Netherlands, behind the wheel of a one-day-old Ferrari 488 Pista.

The 488 Pista is a grand example of the modern supercar, packing 710 horsepower from a twin-turbocharged V8, sent only to the rear wheels. It’s a car so driver-focused that it has a special dial, named manettino, dedicated solely to changing all the car’s settings to their raciest modes with merely a flick. It doesn’t take any skill at all to turn the selector and switch off every last driver all at once. However, it does take significantly more skill to drive under those conditions. 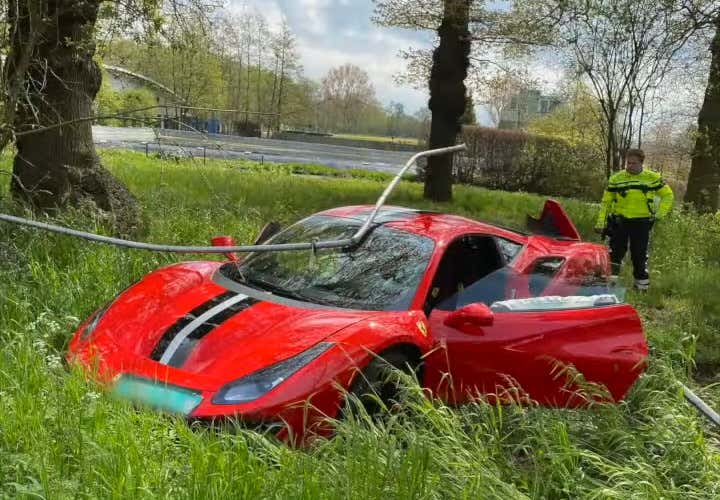 When that skill runs out, we get scenes like the video below. With a chase car filming, the 488 Pista driver can be heard to downshift several gears, slowing down in preparation for a rolling launch. Upon nailing the throttle, the car rotates left, at which point the driver rolls off the throttle, attempting to save the slide. Sadly, the driver overcorrects, and the car spins to the right. Further countersteer is applied but to no avail—and the red Ferrari jumps a curb, smashing into a chain link fence amongst some tall trees.

It’s a sad sight, with significant damage done to the Ferrari supercar and also, we imagine, the driver’s ego. It’s a good lesson for everyone out there—it doesn’t hurt to take a few advanced driving lessons before going ham behind the wheel of a 700-horsepower monster.

Either that, or just leave the safety features engaged—you’ll still do a loud, roaring pull and eight out of ten punters won’t even know the difference. Plus, you’ll get to drive home in a comfy leather seat, rather than sitting side saddle in an expensive tow truck. But hey, it’s your call.