Mercedes-Benz parent company Daimler AG has agreed to a $2.2 billion settlement with car owner plaintiff groups and the U.S. government over diesel emissions in some 250,000 vehicles sold in the U.S. between 2009 and 2016. $1.5 billion of that amount goes toward a settlement with the EPA and California Air Resources Board and $700 million toward a class action settlement with owners of certain diesel-engined vehicles.

As a result of the settlement current and former owners of the affected vehicles, including Mercedes-Benz passenger vans from the 2009 through 2016 model years and Freightliner Sprinters with BlueTEC II emission control systems from the 2010 through 2016 model years, could receive up to $3,290 each. In addition, their vehicles would get software and hardware updates to change certain emissions functions as part of a fix. However, the automaker will not be required to buy back any vehicles — a major distinction from the Volkswagen diesel settlement’s outcome.

The investigation into Mercedes diesels dates back almost to the outbreak of the Volkswagen diesel crisis in 2015, though there are several important differences in actions and scope. What they have in common is that the Department of Justice stated that the EPA and the California Air Resources Board discovered defeat devices in Mercedes-Benz vehicles, allowing them to produce greater nitrogen oxide emissions when driven on the road, as opposed to a testing stand. 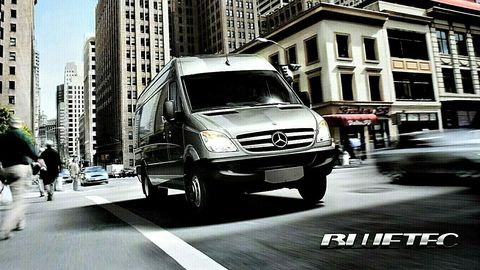 “The settlement addresses allegations made in separate civil complaints filed by the United States and CARB today in the District of Columbia that, from 2009 to 2016, Daimler manufactured, imported, and sold more than 250,000 diesel Sprinter vans and passenger cars with undisclosed AECDs and defeat devices programmed into the vehicles’ complex emissions control software,” the Department of Justice said in a statement announcing the proposed settlement. “These devices cause the vehicles to produce compliant results during emissions testing. But when not running a test, the vehicles’ emissions controls perform differently, and less effectively, resulting in an increase in NOx emissions above compliant levels.”

“The settlement further requires Daimler to implement systemic corporate reforms to detect and try to eliminate violations in the future,” the Department of Justice added in a statement. “This includes conducting significant testing on new diesel and gasoline motor vehicles using a portable emissions measurement system to assess compliance under real-world conditions, installing a robust whistleblower program, enhancing annual AECD and defeat device training for its employees, and performing internal audits subject to review and critique by an external compliance consultant.”

The automaker will also be required to implement new internal audit procedures and take part in projects to mitigate excess ozone-creating nitrogen oxides, similar to what Volkswagen was required to do, but on a smaller scale when it comes to the amounts required to be spent. The automaker will also launch a website for affected owners and begin notifying current and former affected Mercedes-Benz and Freightliner vehicle owners, performing the recall process in several stages.

By comparison, the Volkswagen diesel recall included some 482,000 passenger cars in the U.S., and a significant buyback program.

Overall, this diesel investigation has received much less publicity over the past few years than the Volkswagen diesel crisis in part because Daimler is not actually admitting any wrongdoing, but will nevertheless pay large amounts to the federal government, the state of California and vehicle owners, while the recall and mitigation program is expected to cost Daimler some $436 million.

“As stated in the consent decrees and the class action settlement, the company denies the authorities’ allegations as well as the class action plaintiffs’ claims and does not admit any liability to the United States, California, plaintiffs, or otherwise,” Daimler noted in a statement. “The settlement resolves the company’s pending civil proceedings with the U.S. authorities without reaching any determinations as to whether functionalities in Daimler’s vehicles are defeat devices.” 'Vettel will raise the team to a different level'
News & Features Watch the 800-HP Pagani Huayra BC Roadster Set a New Lap Record at Spa
We and our partners use cookies on this site to improve our service, perform analytics, personalize advertising, measure advertising performance, and remember website preferences.Ok