Nuclear energy is no joke. It’s powerful like nothing else and has a minuscule environmental impact when done right, but it has two big problems; nuclear accidents, and nuclear waste. Accidents must be prevented at all costs—and not just in power generation. Highly radioactive spent fuel rods have to be kept somewhere far away from civilization to decay in peace. But before that happens, they have to be transported to their final resting place as securely as possible.

In the United Kingdom, these so-called nuclear flasks full of deadly waste are transported by rail, the same rail network used to transport millions of people every day. This raised concerns; what if a nuclear container was involved in a train crash? In order to test what would happen if an accident ever occurred, the British government set out to smash a locomotive at full speed into one. 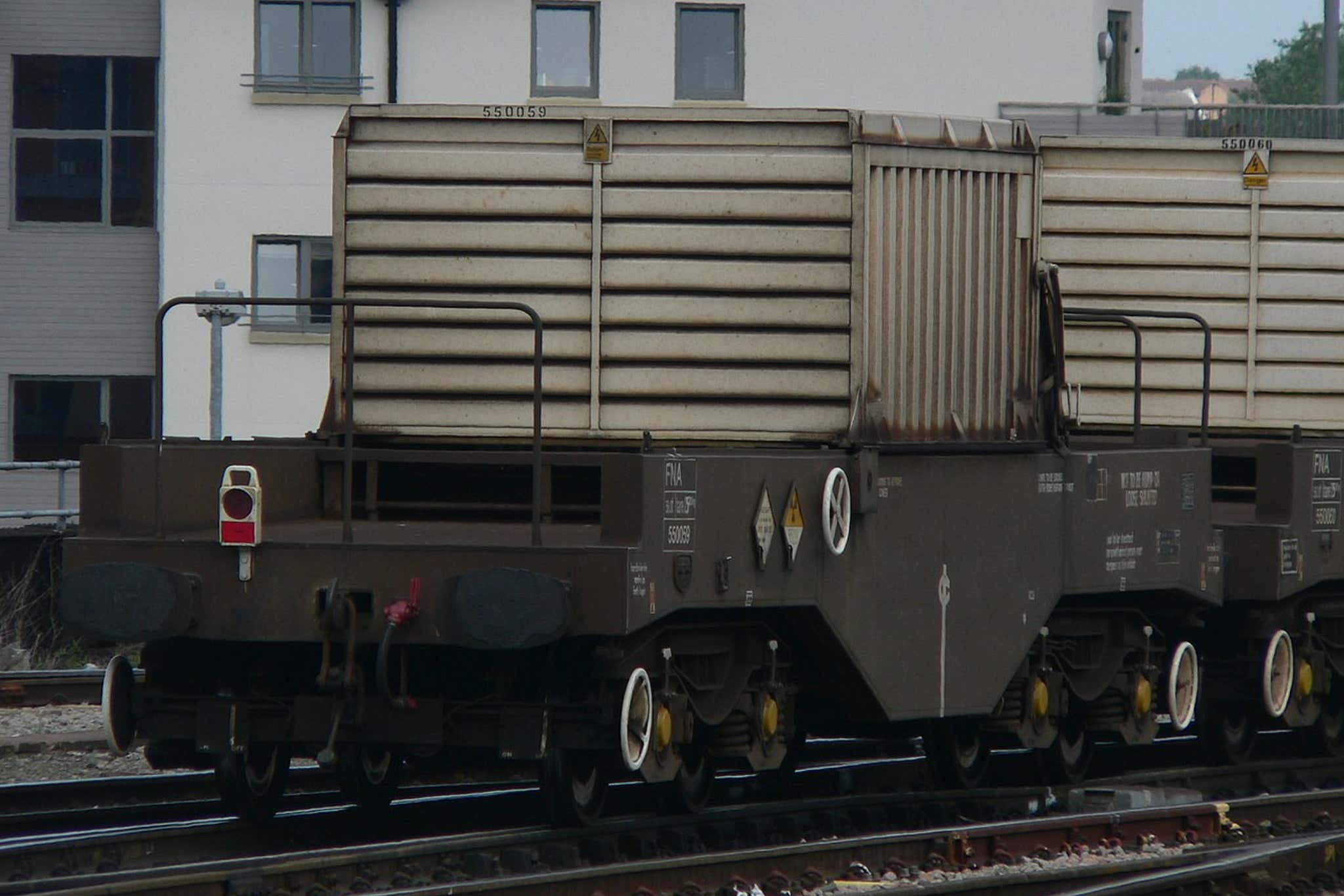 A nuclear flask is transported via rail through Bristol, U.K.

This may seem like a ridiculous test, but the containment device was a little more than just a sturdy box. Truth be told, the flasks are massive steel forgings weighing 50 tons apiece with solid metal walls over a foot thick. The lids, also huge steel forgings, are held fast with 16 bolts each capable of withstanding a load of 150 tons.

But that wasn’t enough to gain the confidence of the British people. So in 1983, the government decided to drop a flask straight off of the assembly line from a height of nine meters, or about 30 feet. In place of spent fuel rods, they used steel replicas, immersed in water just like the real thing. And the test results were positive. Even though the flask was dropped on its weakest point, only a small amount of water escaped—a quantity not significant enough to be harmful. 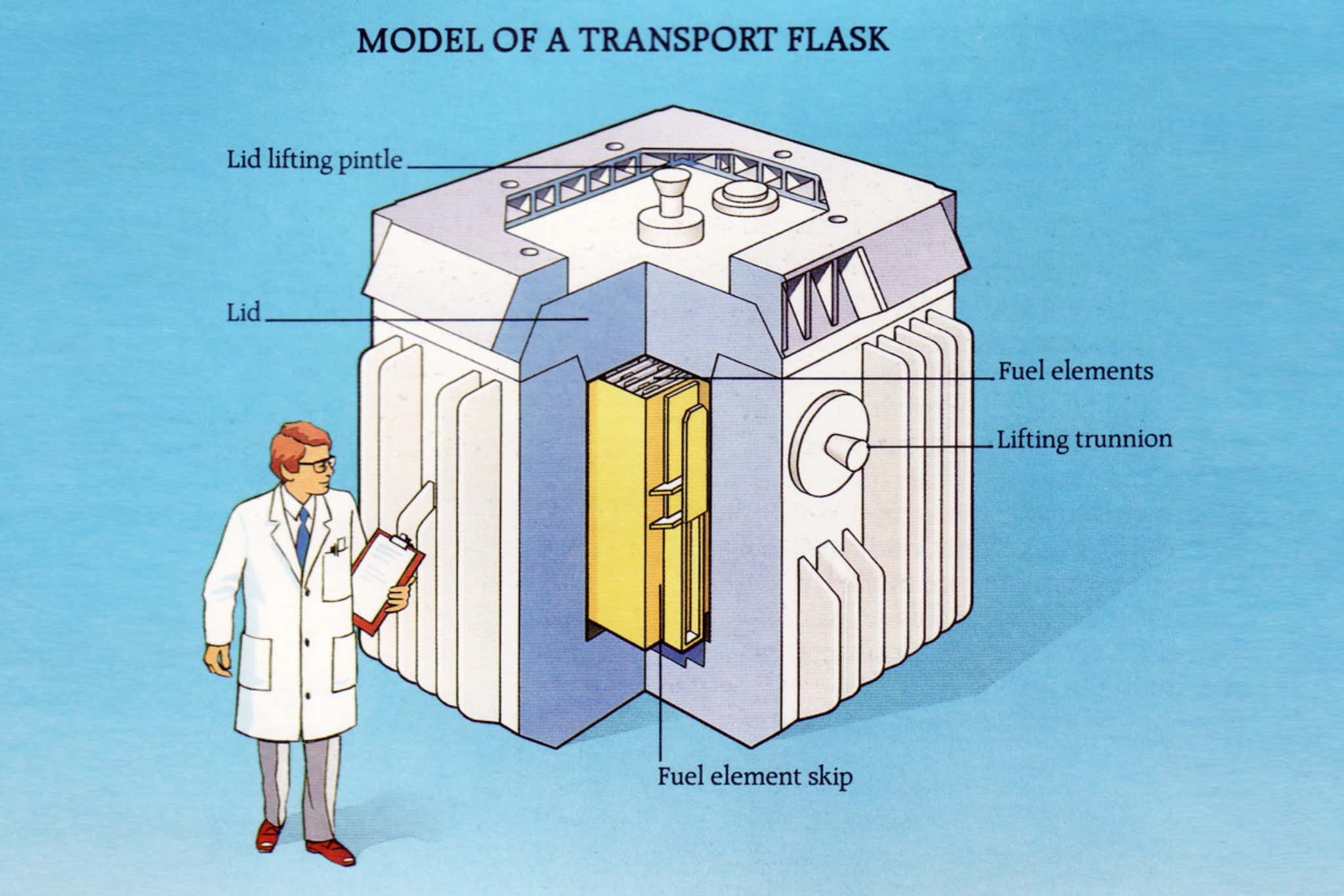 However, the real test came a year later. In 1984, the British government refilled the same flask from the drop test back up with more than a ton of water and 200 steel rods meant to imitate their uranium counterparts. Finding a length of test track in Leicestershire, they mounted the flask to one of the rail cars meant to carry them, and then laid it on its side directly on the track. Once this work was completed, they found an appropriate locomotive to ram it with; a Type 46 diesel-electric weighing 140 tons. To add to the mass of the impact, they also attached 3 passenger cars.

Once they had covered the train and flask with scientific instruments, they pressurized the flask to 100psi to measure any loss after the impact. They then surrounded the area with 32 different cameras, found a helicopter to chase the train all the way to its destination, and set it off down the track with no driver three-quarters of a mile away from its final destination. The empty train accelerated, reached 100 miles per hour before impacting the flask at full speed. You can see what happened at around 7 minutes into this video, which is cued in below.

Needless to say, the train hit the flask with incredible force. The locomotive was almost completely destroyed and the entire train derailed. That 50-ton cage was tossed to the wayside like paperweight.

In the aftermath, the pressure inside the flask was measured and just 0.29-PSI had escaped. Success. 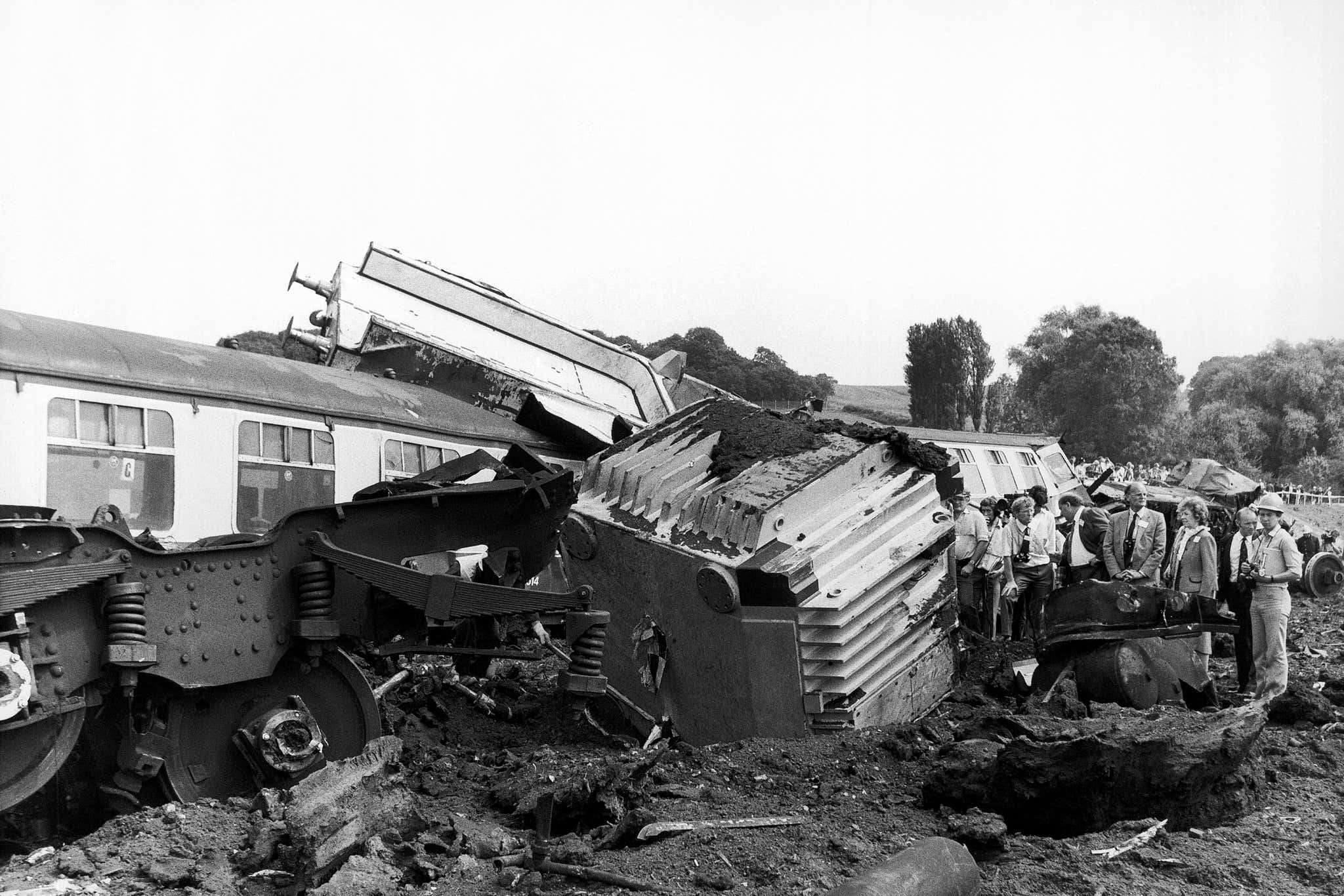 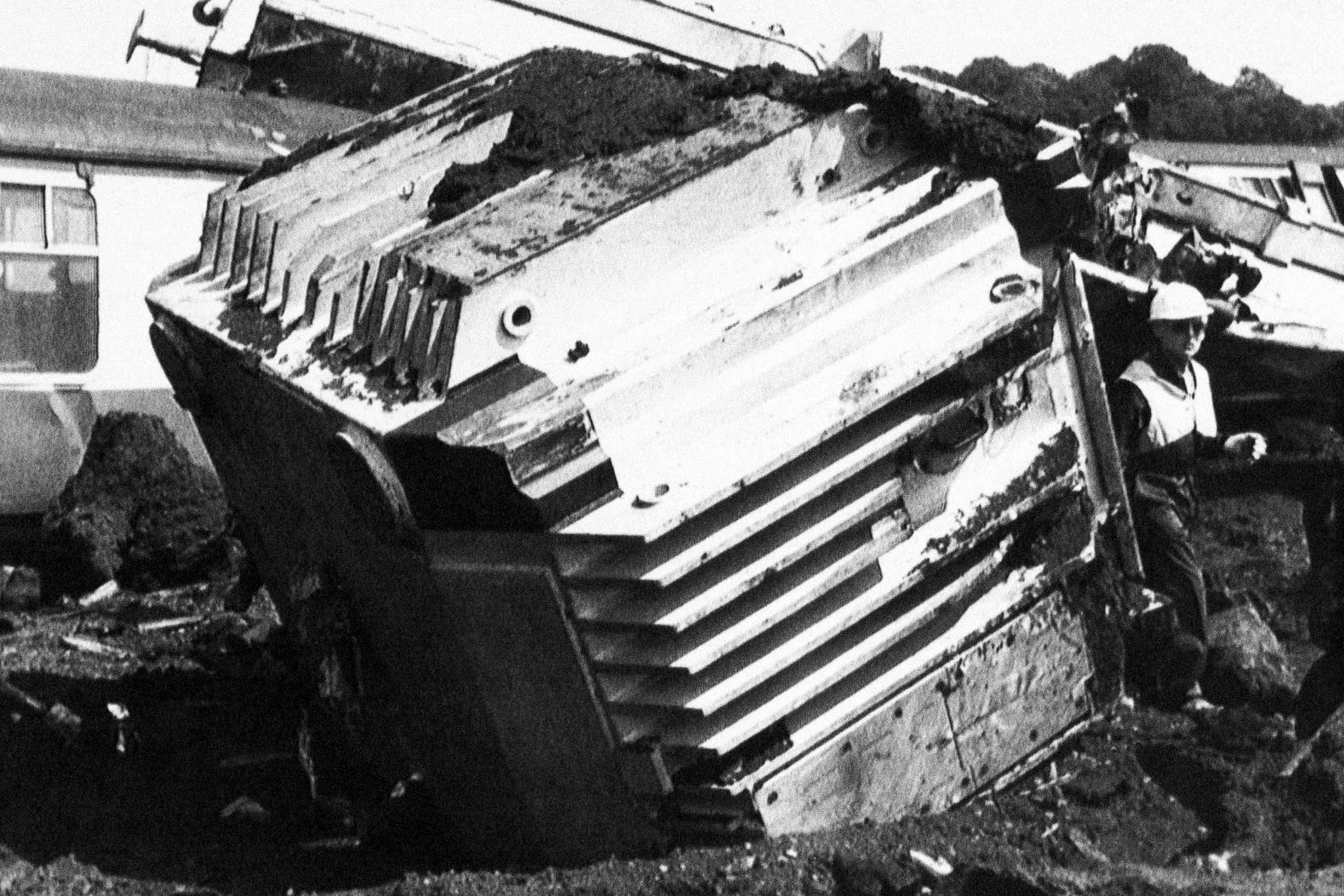 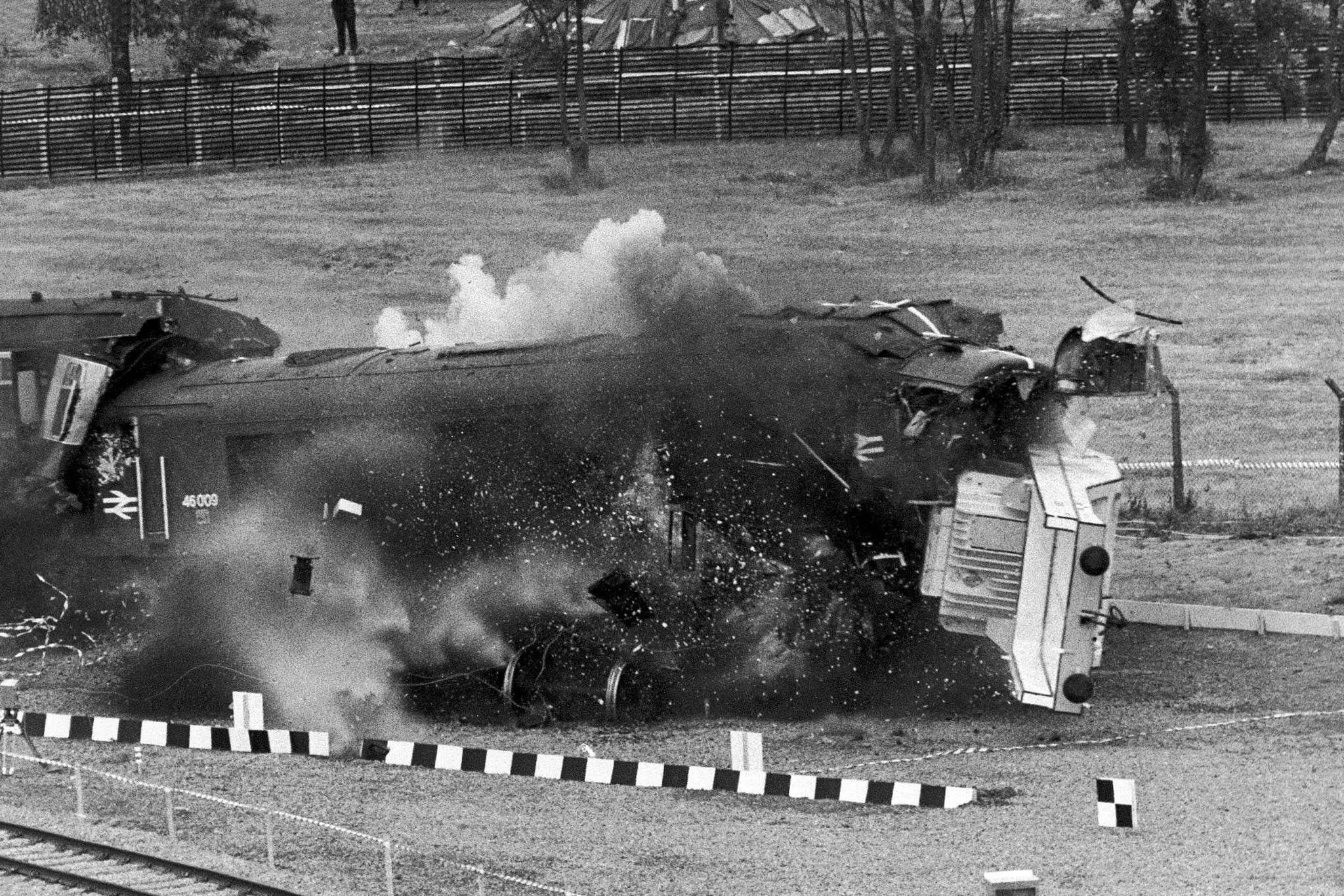 However, concerns about transporting nuclear waste are still very much with us today. Many argue that modern trains—capable of speeds of up to 170 mph in the U.K.—would do significantly more damage to the flasks if an impact or derailment occurred. People also worry about the effects of the radiation that escapes the flasks while they pass by passengers platforms, although the British government says it’s not enough radiation to be harmful.

But whichever side of the argument you fall on, you can at least appreciate the lengths the British government went to in order to ensure the safety of their nuclear flasks. It’s not every day you get to see a train run into something at 100 mph in the name of science.