James Bond’s gadget-filled cars are a staple of the 007 films. Each weaponized ride is as much (or even more) of a character as the spy himself. And though his Aston Martins are icons in their own right, BMW’s three-movie deal that put Pierce Brosnan in some ultimate driving machines in the late 1990s produced at least one worthy Bond car: the Q-built 1997 BMW 750iL from Tomorrow Never Dies. It can dispense tear gas and nails, be controlled with a cell phone and of course, shoot rockets.

Thanks to movie magic, that is. You know it’s just a fancy prop that doesn’t actually do all those things, same as any pricey replica bought by a rich sucker. But what you might not know is that at the exact same time, BMW actually sold what can fairly be called a real-life version of James Bond’s E38. That anyone could buy. It had heavy armor, its own oxygen supply and fire suppression system, and spherical submachine gun ports for when things got hairy. It was called the BMW 750iL Security, and just like Bond’s Bimmer, it’s saved lives.

The 750iL Security Line—known internally as the 750iLS—was a special-order version of BMW’s flagship sedan, loaded with everything a hard power broker might need to stay safe in a tricky situation. There was also a lower-spec “Protection Line” car that had run-flat tires and was “bullet-resistant,” but it wasn’t nearly as safe. For some perspective, the lower-end Protection Line car weighed another 300 pounds over a stock 750iL. The Security Line 7 Series, however, had an additional 2,000 pounds of stuff on board, weighing in at over 6,700 pounds. That’s a three-ton (and then some) sedan.

As a result, zero to 60 mph came in 8.8 seconds. I haven’t found any driving reviews of the Security Line. The E38 was the last 7 Series that was worth a damn on the road, but you have to imagine clocking in at over three tons had a negative effect in the handling department. Anyway, the good news is that not only did BMW make this IRL Bond car, it went through the trouble of printing up a supplemental owner’s manual for it, complete with fun illustrations and hilariously rote descriptions of its active defense systems.

Of course, we’ve got screenshots to share with you. 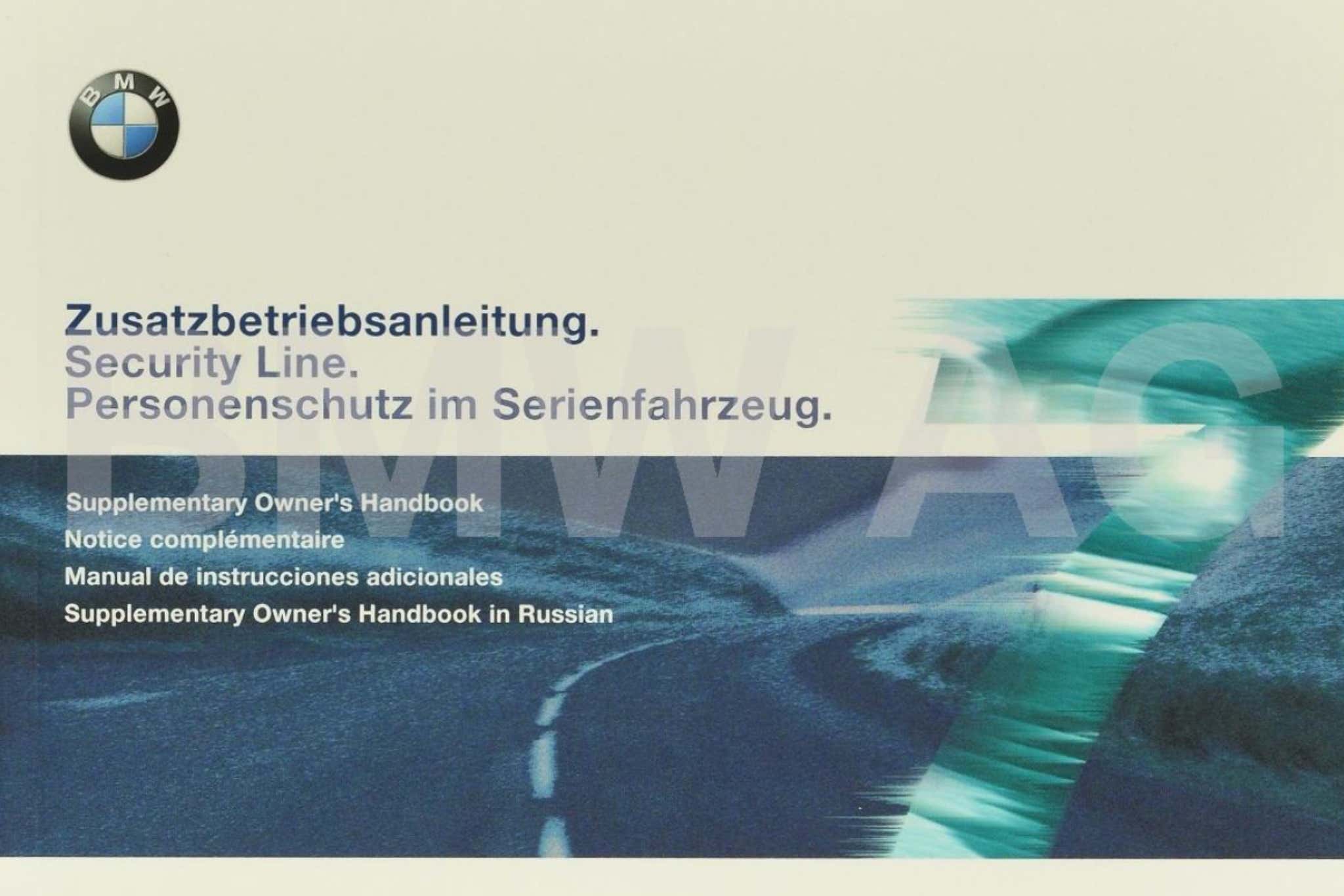 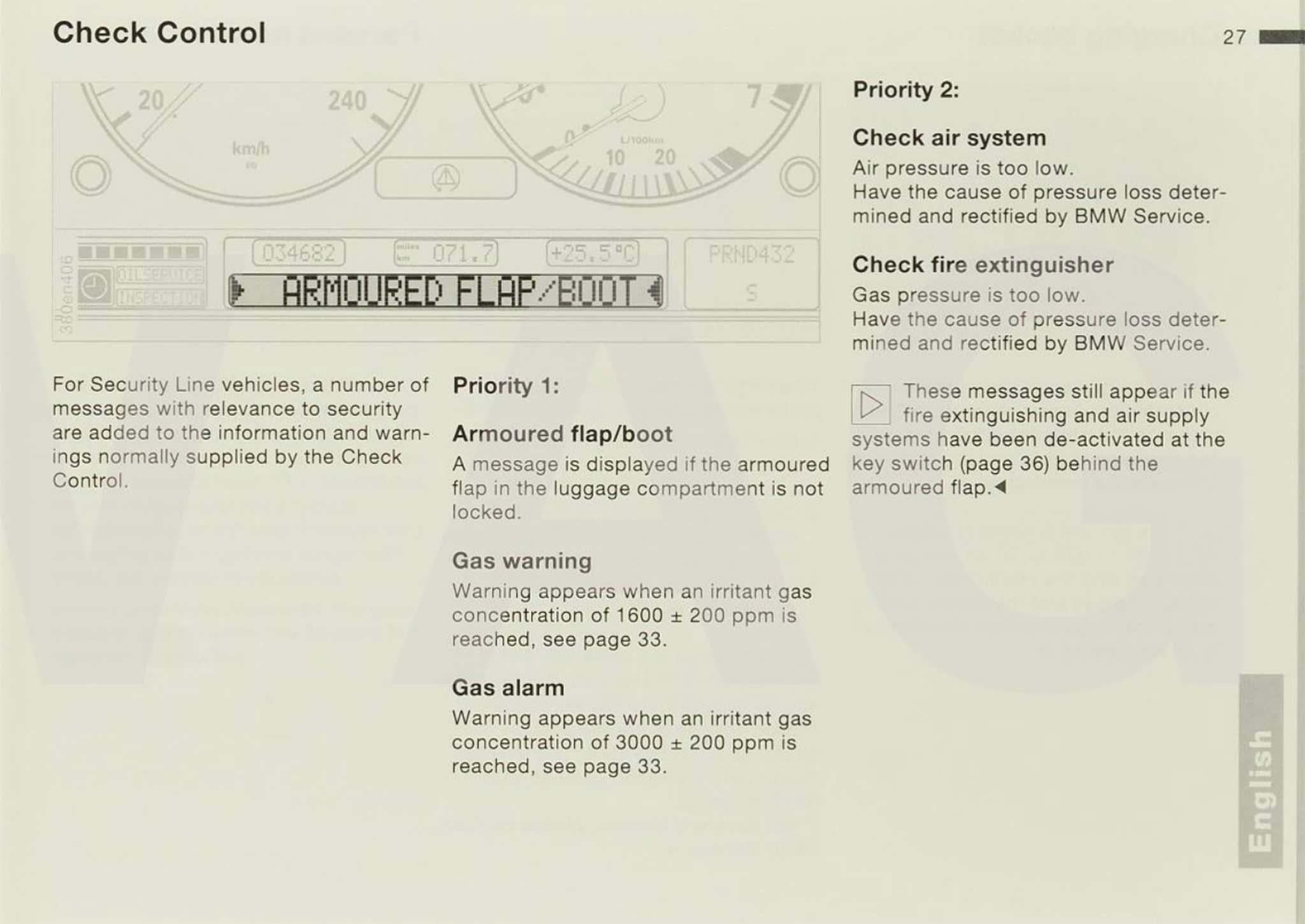 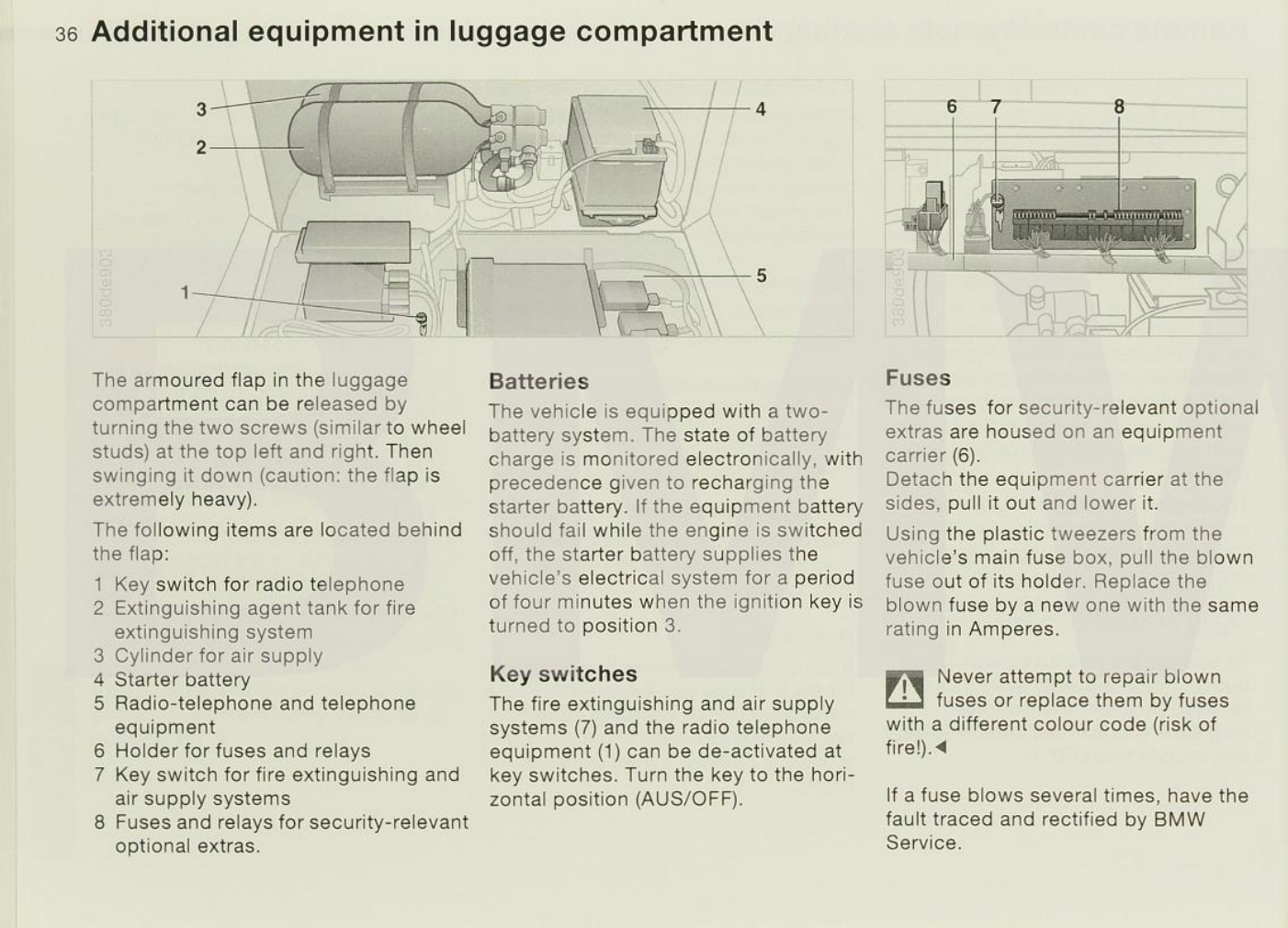 We don’t know the ballistic rating of that armor, but just by taking a look at the windows in a Security Line car, you can tell they’re in the neighborhood of 2-3 inches thick. It may also surprise you to hear that they do indeed roll down, albeit only 8 inches. They’re so heavy that they’re moved by hydraulic actuators instead of electric motors. But there’s no anti-trap device for wayward body parts—you get the sense these windows could literally cut off a finger.

About a minute and a half into the video below you can see the details of that glass, the additional armor that’s added to the car, and a few other special features like the explosive windshield release. The nine-minute promo video for the car embedded below is cued in to the right spot if you press play.

To be fair, it won’t stop anything, but it will stop a suicide bomber. We know this because in December of 2006, Sri Lanka’s secretary of defense and current president Gotabaya Rajapakse was attacked in his 750iLS en route to a meeting. Looking at the aftermath of this attack, you can see just how much damage was done. Now combine that information with the knowledge he escaped almost completely unharmed, and you’ll start to understand how effective that armor is.

But steel plate and thick glass are just a few of the defense systems the 750iLS has to work with. While it may not be able to deploy tear gas like Bond’s car could, it can certainly defend against it. Sensors on the outside of the car can detect such chemical irritants and instantly roll up all of the windows to seal the car to the outside world. Onboard oxygen can also supplement whatever air is in the cabin until safety can be reached.

Bottles of oxygen are also not the only thing the car keeps under pressure. An active fire suppression system is integrated into the vehicle. Temperature sensors around the engine and fuel tank can detect when things are getting hot enough to be dangerous, at which point the car will automatically dispense fire retardant from several nozzles on the vehicle’s underbody. 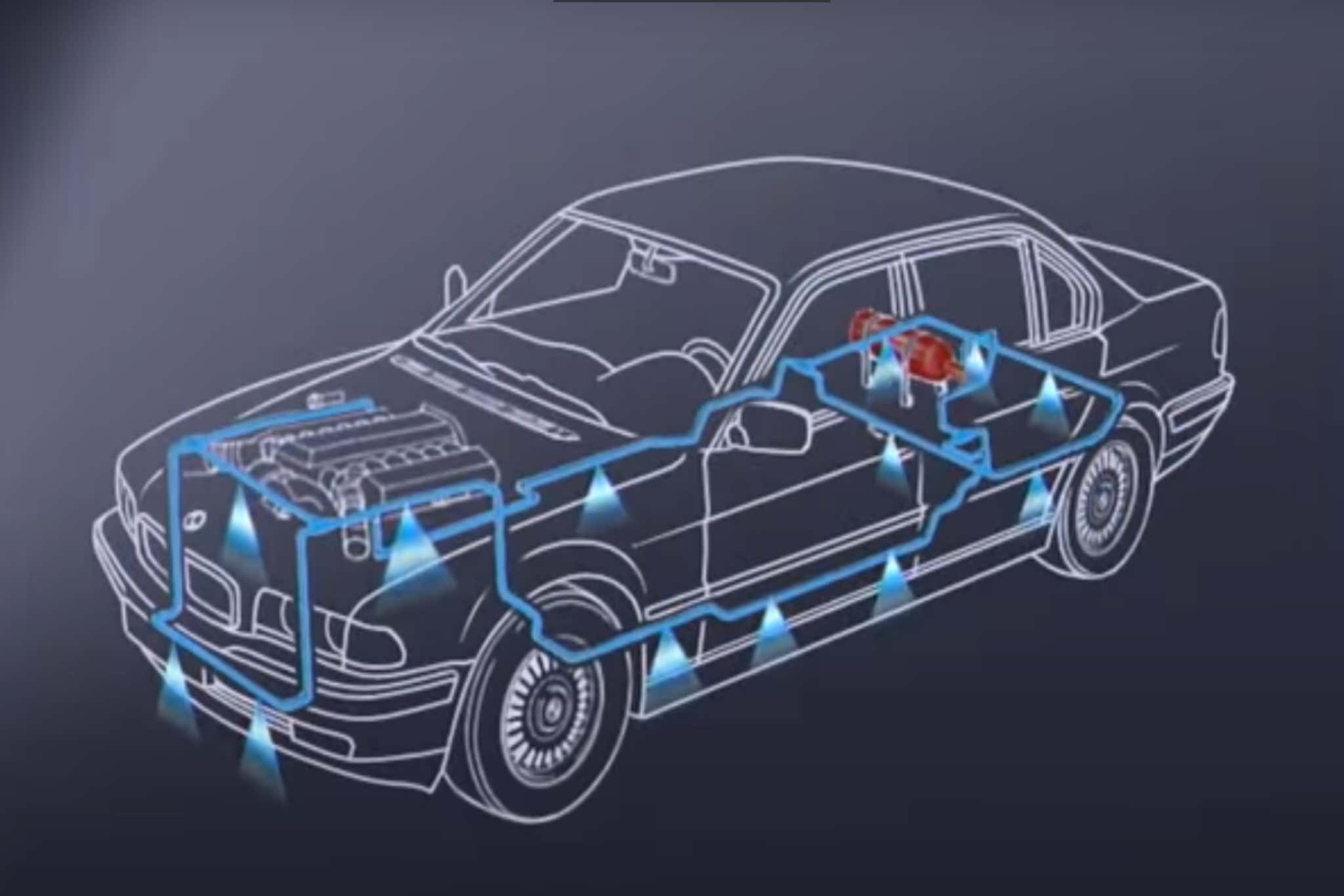 But all of these defense systems can only last so long. The bulletproof glass in the windows will, eventually, shatter. The oxygen will run out, and the steel armor in the doors can also only take so much fatigue until it starts to lose its effectiveness. BMW thought of this, however. If you peruse through the owner’s manual for the 750iLS, you will eventually reach the section labeled “Active Defence.”

By active, they mean guns. More specifically, MP5K submachine guns. And I know that somebody in the comments will tell me that these aren’t really machine guns because they fire pistol-caliber ammunition. Fair enough! You can tell that to the ATF. 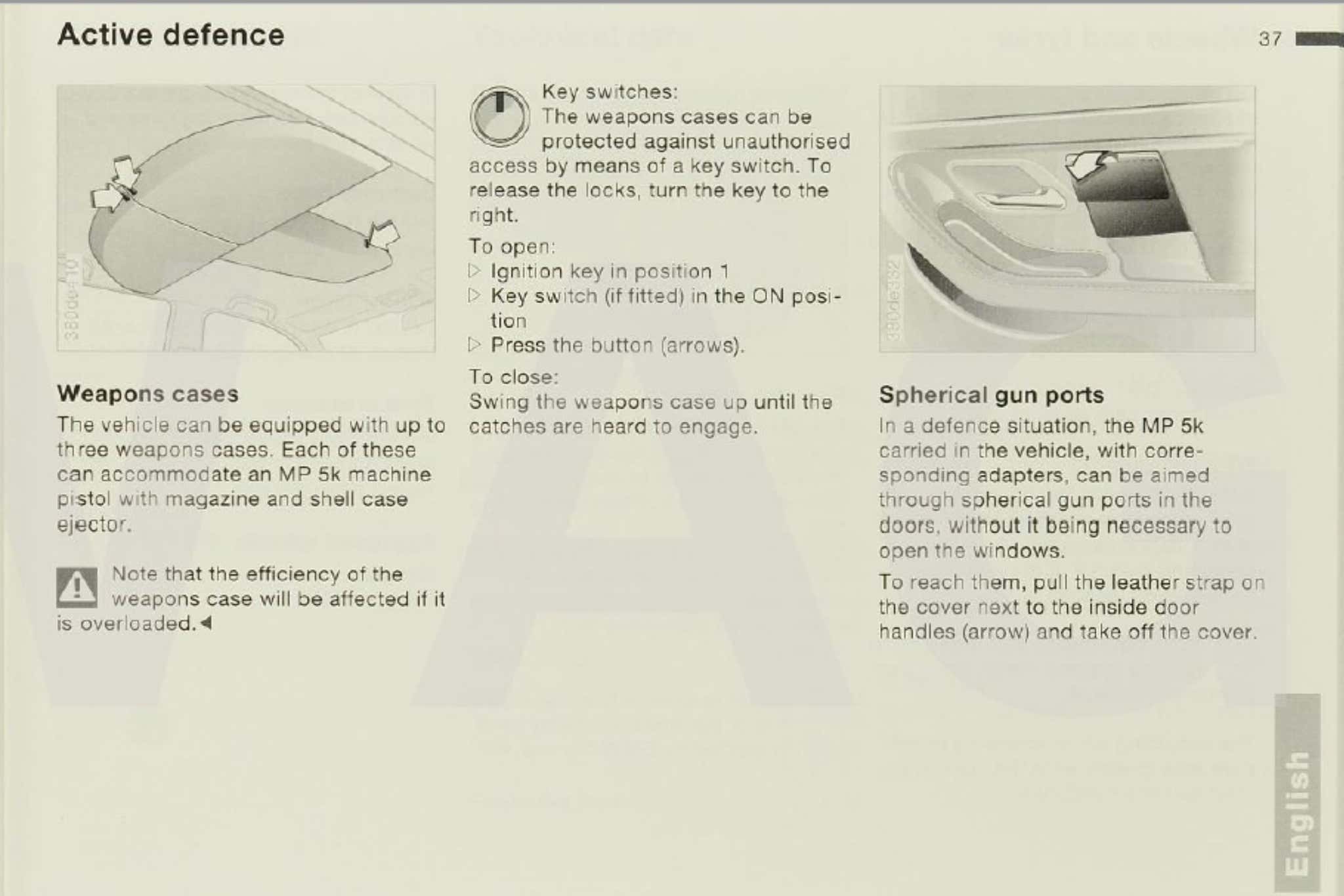 In boxes mounted to the roof inside the car, you could get as many as three spaces for MP5Ks. You could theoretically stuff more guns in there, but BMW insists that “the efficiency of this weapons case will be affected if it is overloaded.” I checked to ensure BMW wasn’t just warning trigger-happy Americans not to do this in English, and indeed this warning exists in every language the document came in. It is also worth noting that the German automaker would not actually sell you the guns—it isn’t in that business—it will only give you a space to put them.

However, that “space to put them” means a bit more than you might think. If you wanted, BMW would build spherical gun ports into the doors of the car for you to fire out of. These were concealed behind a cover in the interior and could be put into action with the pull of a leather strap. That’s not quite the same as miniguns obscured behind the headlights, but hey, it’s something.

In fact, many of the features that are similar to the Bond car are functionally identical but don’t come with quite the same… panache as they do in the movies. Sure the tires on the 750iLS are run-flats, but they don’t just automatically reseal and inflate themselves like they do in movies. They’re conventional solid rubber discs mounted to the barrel of the wheel, and they need to be inflated at high pressure to prevent the ride from being atrocious. The owner’s manual also tells you what specific tire pressure to inflate them to if you’re interested. 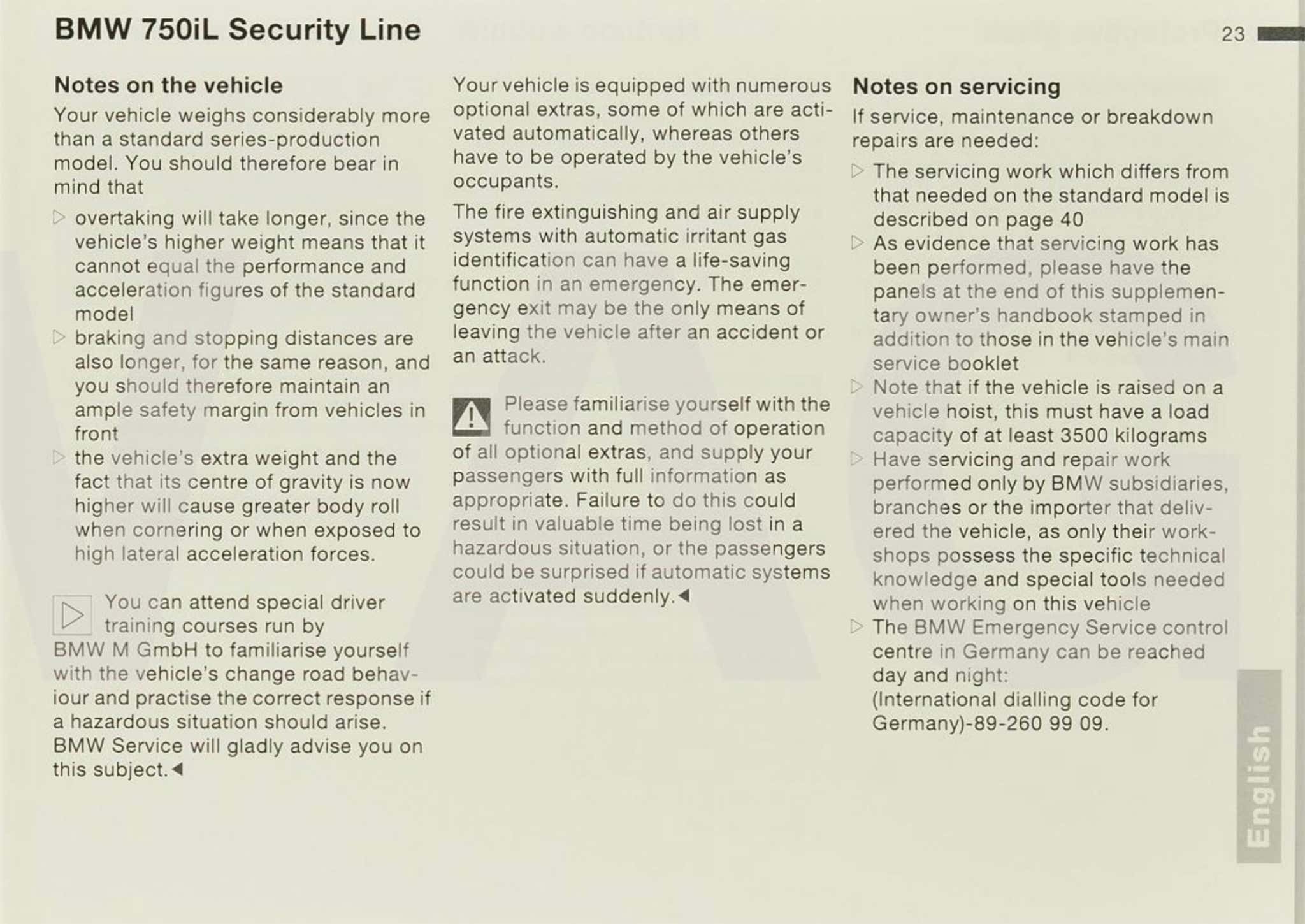 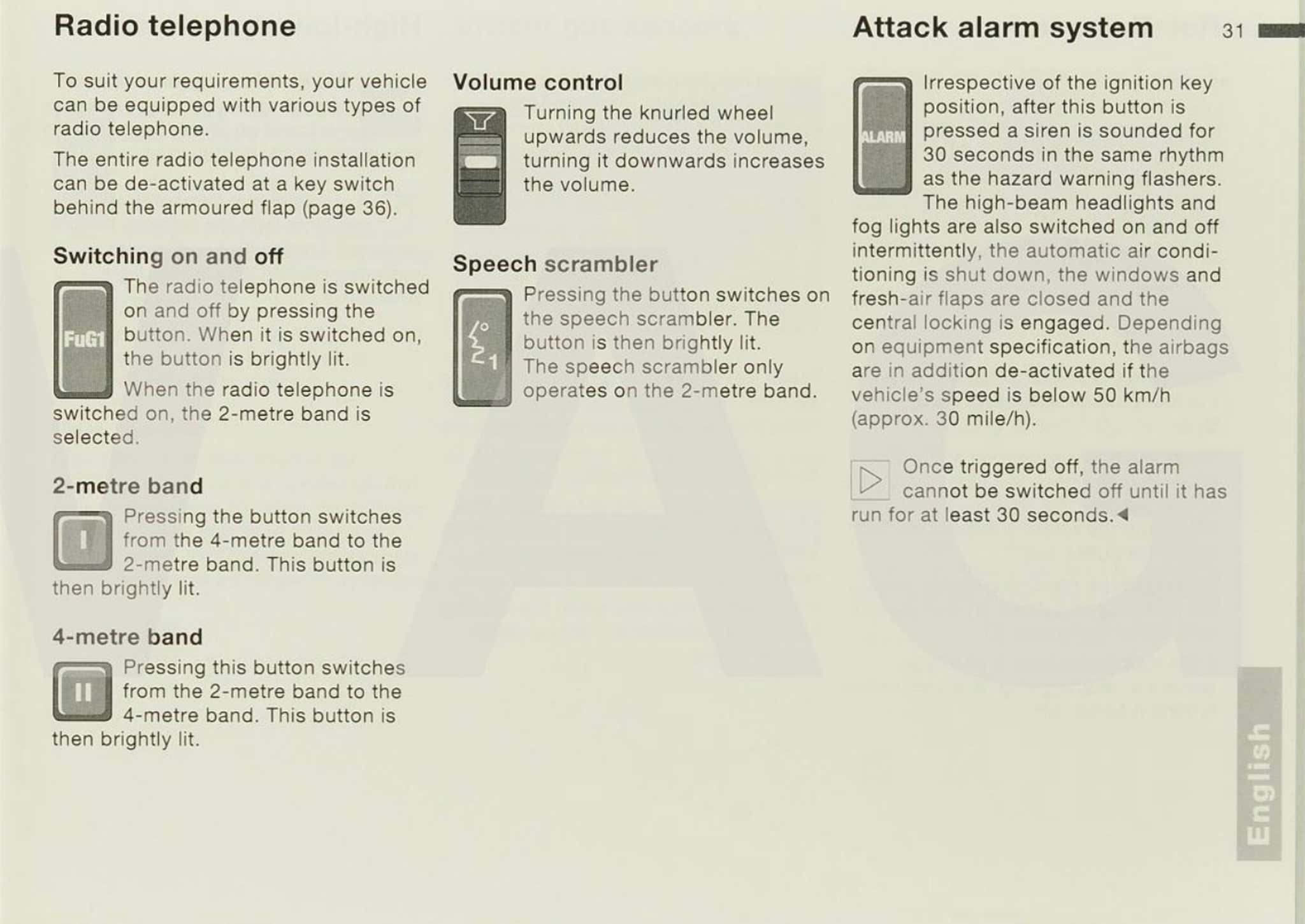 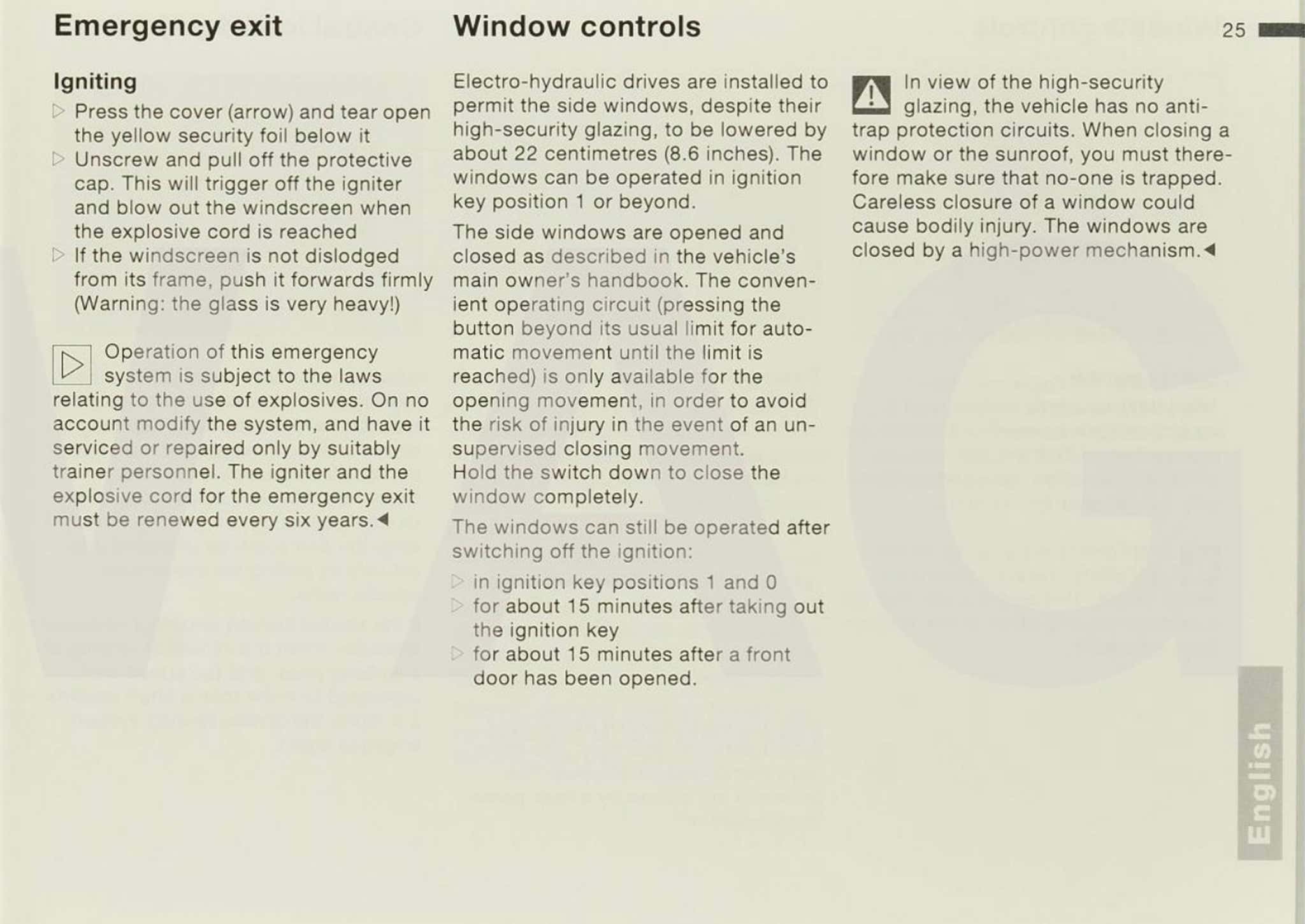 And there’s one practical ability mentioned here that even Bond’s car didn’t have—or at least as far as we know. The 750iLS can disable its airbags below 30 mph at the touch of a button. You know, for ramming.

But the onscreen theatrics are just the reality of Hollywood movies. Q doesn’t spend an hour telling 007 which brand and weight of oil to use, he doesn’t tell him which BMW part number the tire chains are, he spends 5 minutes debriefing Bond who, of course, mentally downloads all of the features of the car pretty much instantly and has enough brain capacity left to make witty remarks.

And since real life isn’t like the movies, it makes sense that BMW had to print up this blasé guide, even for a super limited production car like the 750iLS. You don’t want to be fumbling for the oxygen switch in a real crisis. It’s fun to imagine Bond checking the manual every time he forgets where the Stinger missile switch is, though. 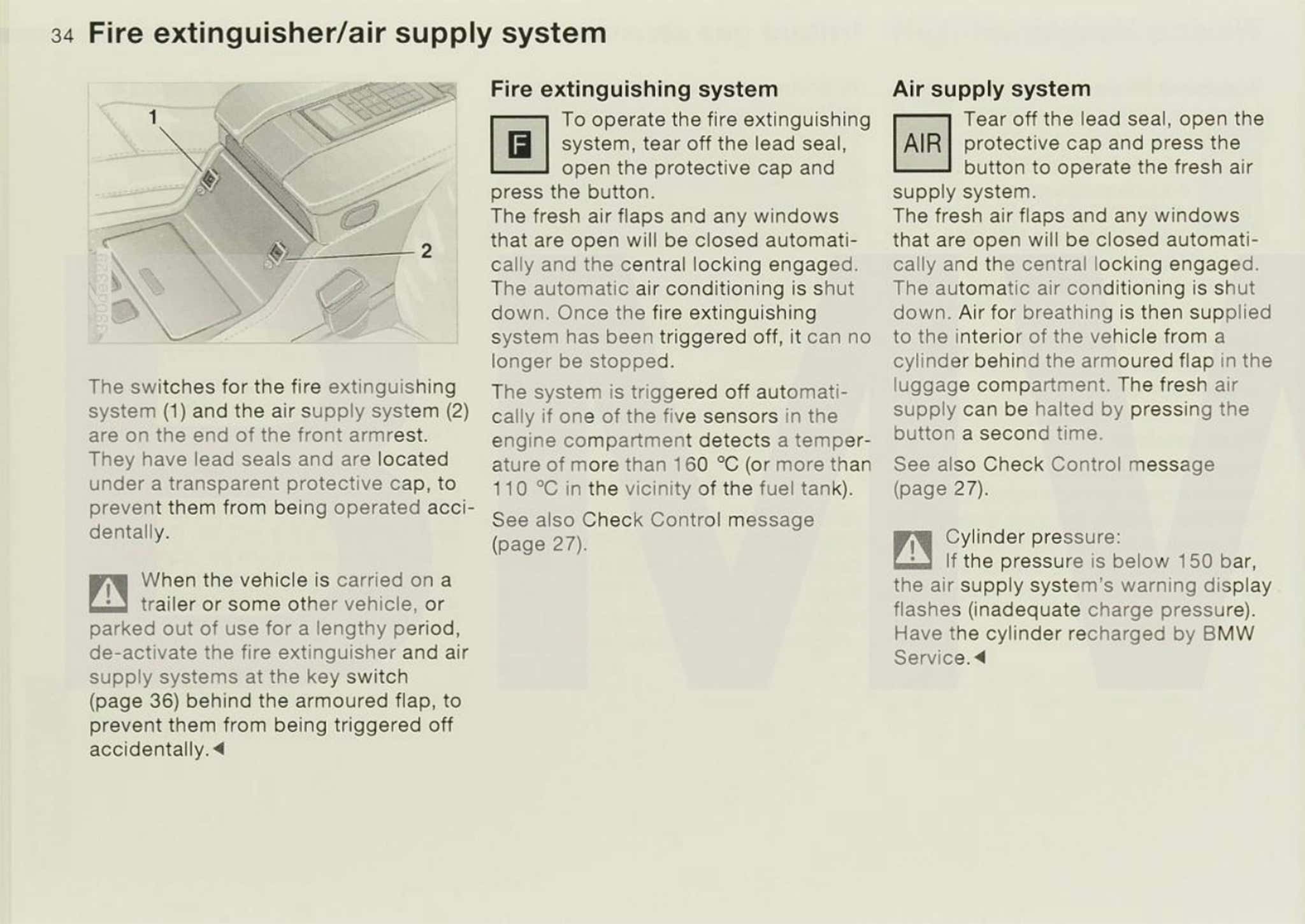