BMW has something of a head start in the electric vehicle space among other legacy automakers due to its i3 and i8 hybrid-electric vehicles. Even though said models weren’t exactly revolutionary nor sales successes by any means, they helped lay down the groundwork for the modern-day and future BMW EVs, and the all-new iX concept unveiled today is proof of that.

Developed completely in house with very few off-the-shelf electric components, the iX promises to be BMW’s future-facing foray into the electric SUV market. At heart is BMW’s “eDrive” electric drivetrain, which is now in its fifth generation. In the iX, eDrive translates two electric motors, the battery, and all of the associated electronics and charging tech. All of this was developed completely in house, without partnership from an outside company.

The drivetrain—including the batteries—also uses no rare-earth metals, a step Tesla has just recently announced it’s made. BMW says that in the iX, the drivetrain’s maximum output is in the neighborhood of 500 horsepower, however, it says that much power only translates to a zero to 60 time of five seconds dead. In a nutshell, the iX is likely pretty heavy despite claiming to use a significant amount of carbon fiber reinforced plastic in the body shell. 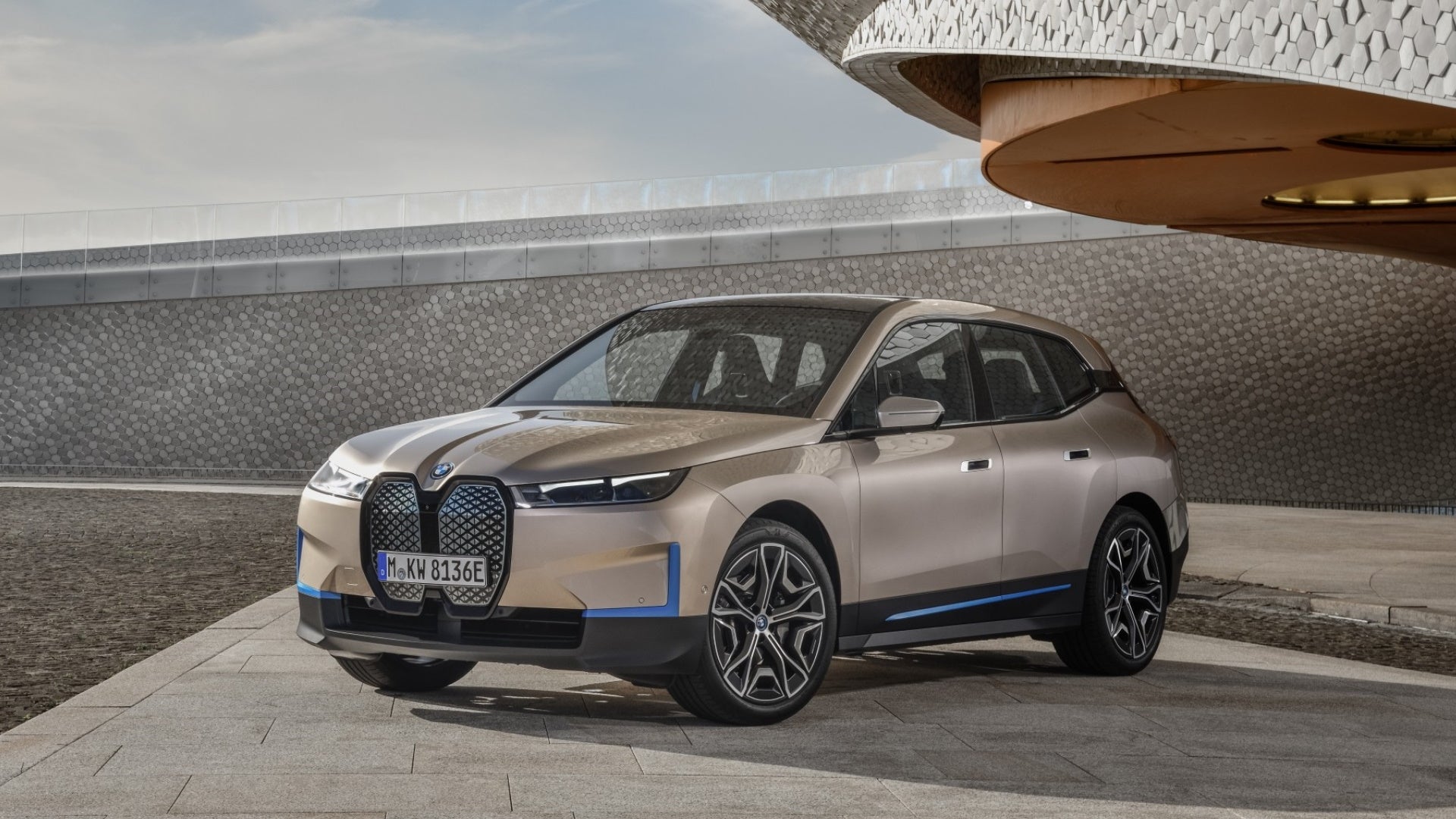 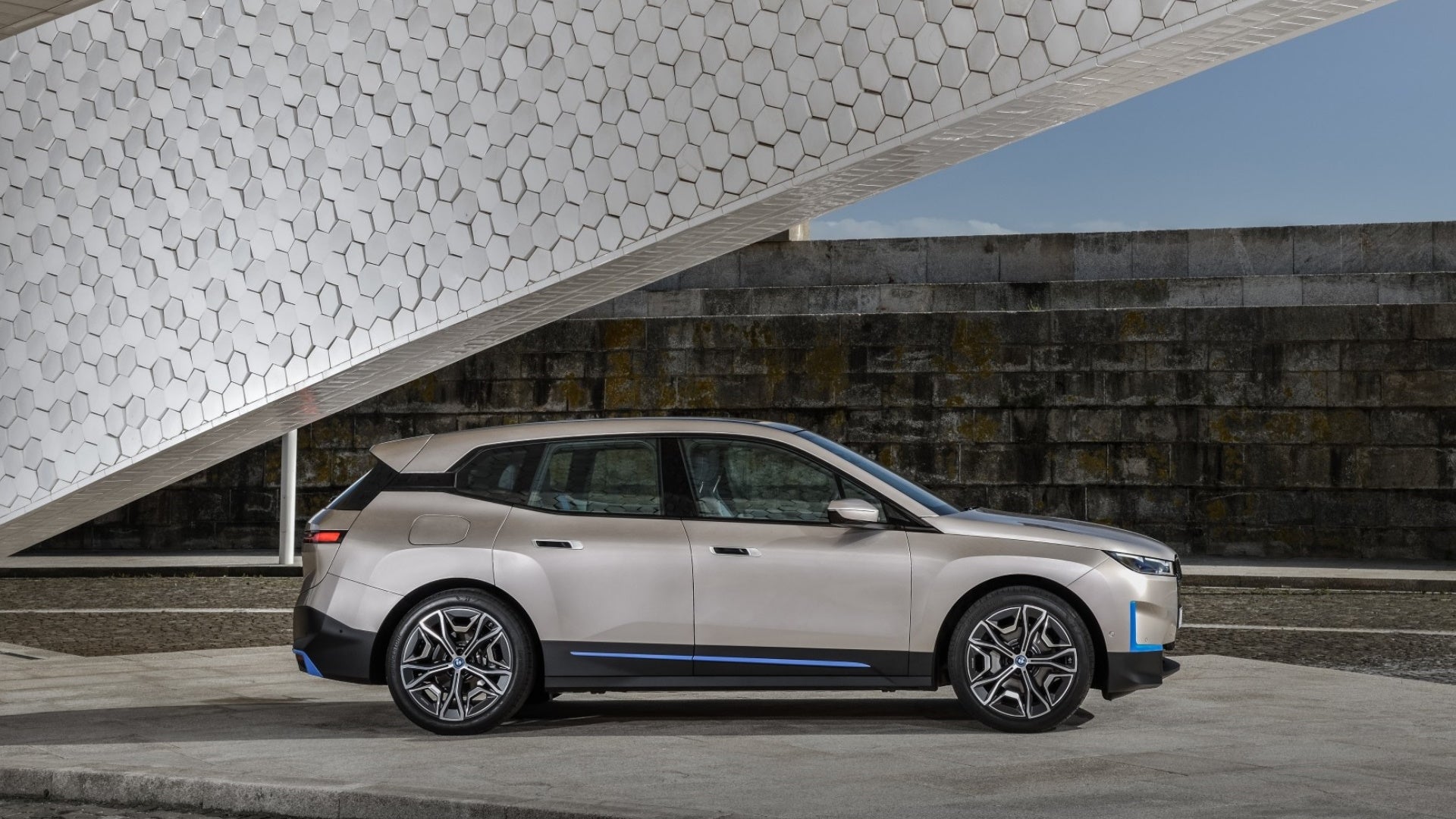 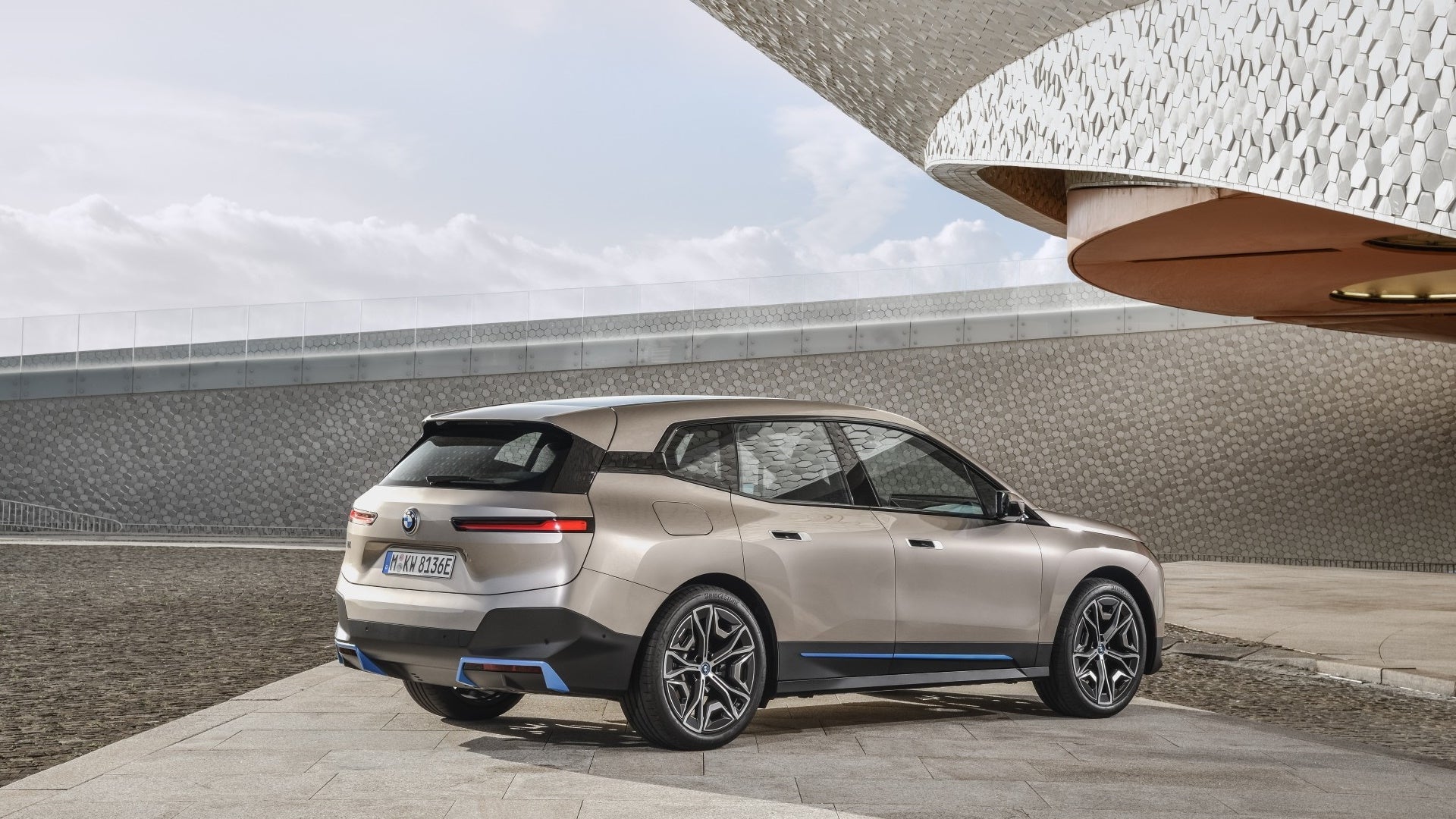 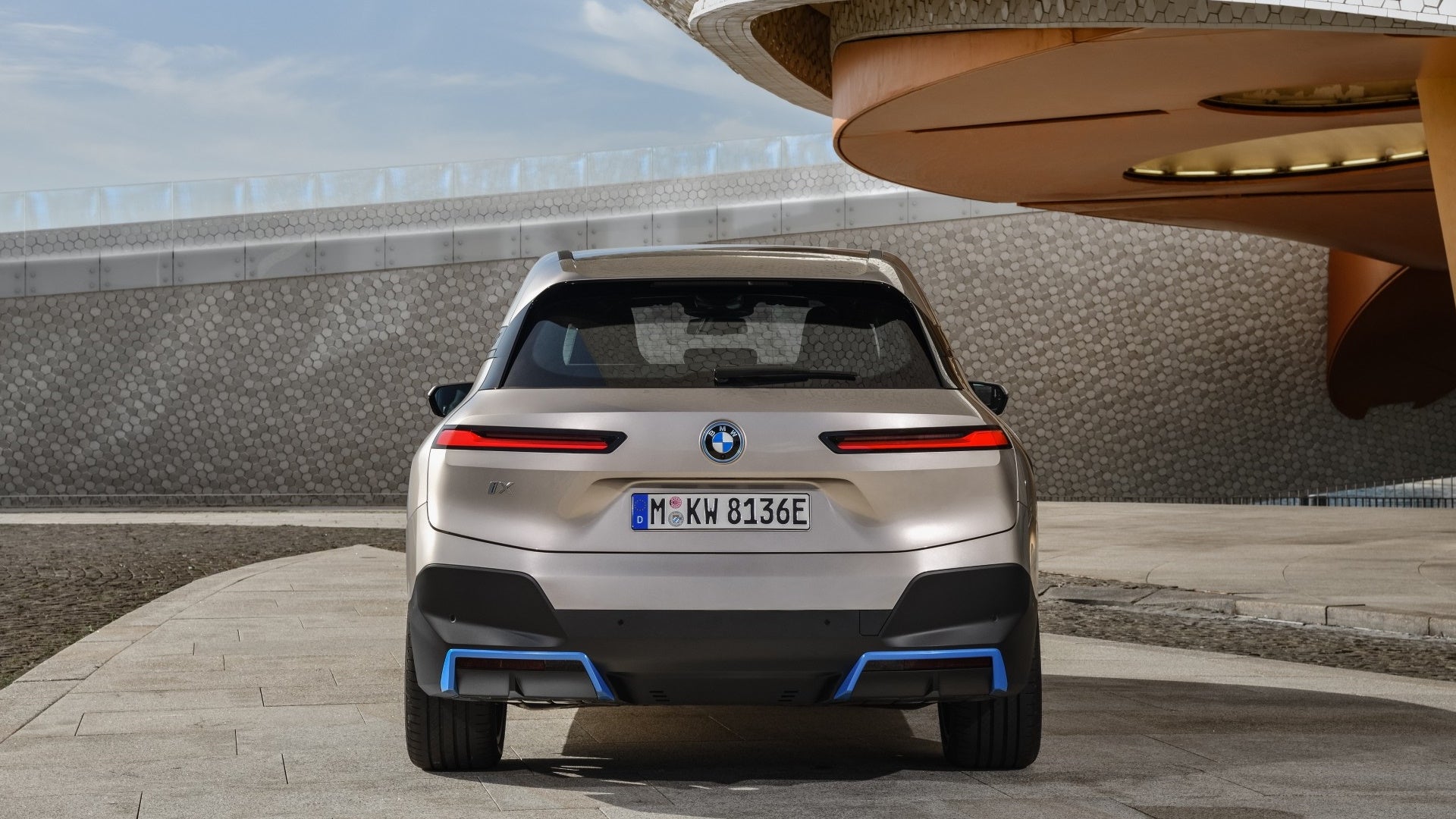 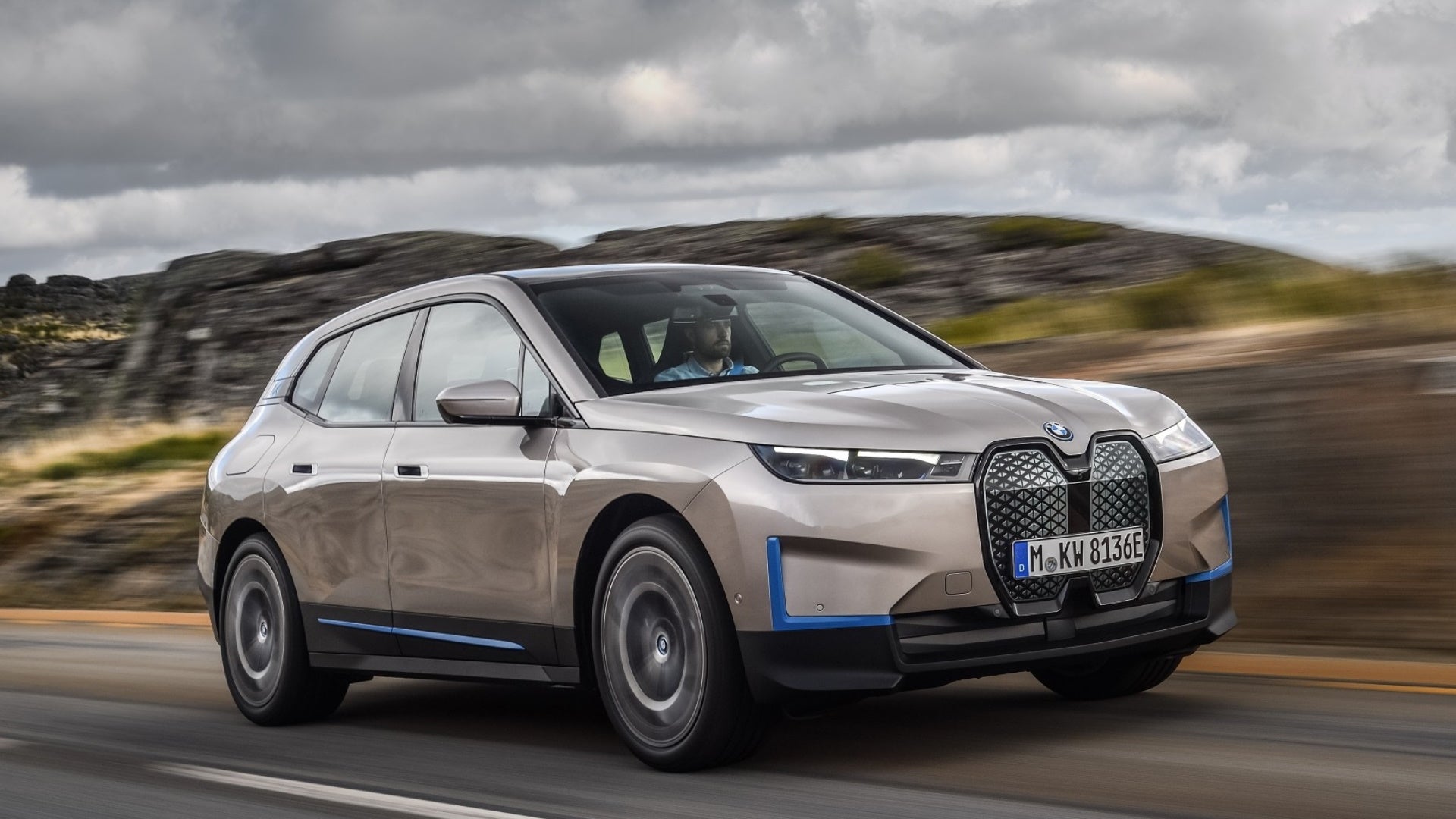 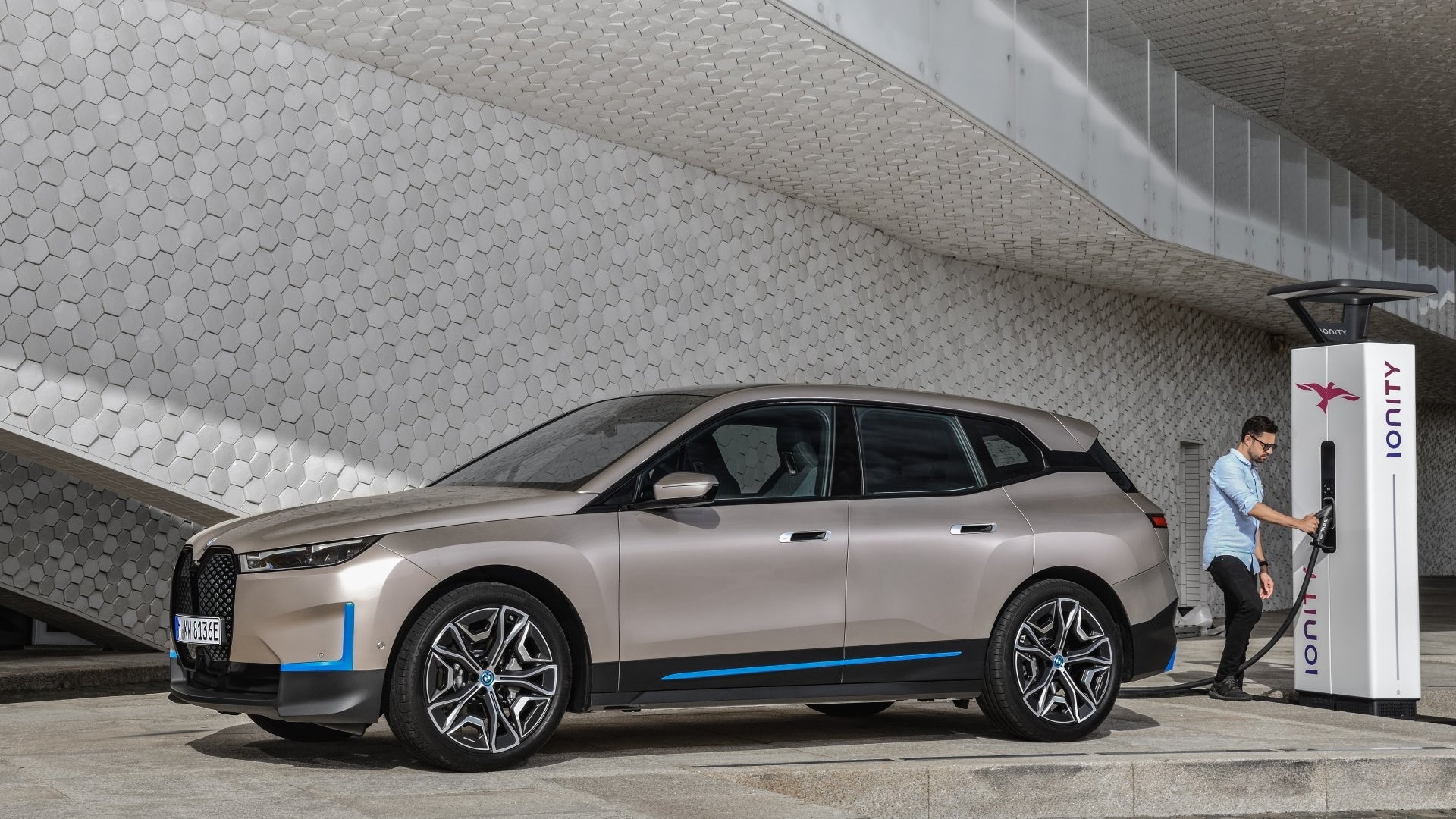 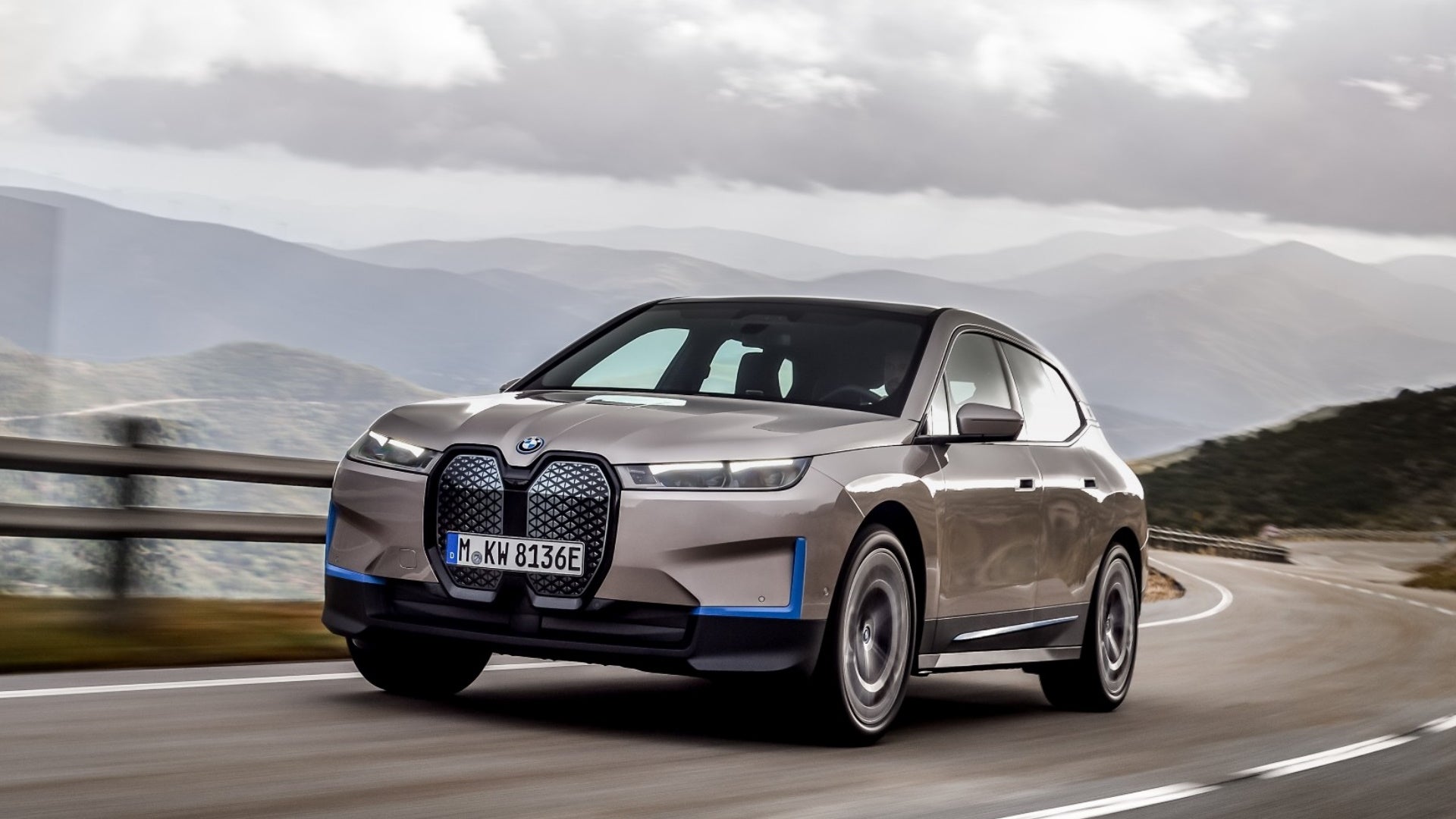 A lot of that weight is doubtlessly in the battery pack, which boasts 100kWh of electric charge. According to BMW, this will give the iX a range of around 300 miles when the EPA test cycle is used, meaning the range is in all likelihood actually longer than that, as it is on the Porsche Taycan. The German automaker also claims that thanks to a 200kW charger, the iX can go from 10 to 80 percent battery power in just 40 minutes, or gain 75 miles after replenishing the battery for ten minutes. It’s also stated that these batteries are eco-friendly due to their high recyclability.

In the United States, the iX is going to use EVGo’s nationwide charging network, which General Motors and other automakers also use. BMW says that drivers will receive $100 worth of free charging to start, but will have to pay on their own after that.

On the outside, the iX is going to be an aerodynamic SUV about the size of an X5 or X6, sharing its buck-toothed kidney grille with the new 4 Series and having a drag coefficient of just .25. The grille isn’t an intake on the EV, of course, it’s a spot for BMW to stuff a bunch of sensors for the car’s suite of driver aids, which the automaker claims will be extremely capable thanks to a powerful onboard computer—although details weren’t provided.

Interestingly, BMW claims the plastic material the sensors are protected by is not only sturdy but self-healing, and is able to repair small scratches in its surface if left for 24 hours in a room temperature environment.

Its aerodynamic tricks also aren’t just told by its low drag coefficient, as BMW says that by carefully shaping the front end, rear end, underbody, and wheel areas, the iX picks up an impressive 40 miles of range. Also involved in this aerodynamic efficiency is active cooling flaps, which open and close depending on the cooling load to make sure the car is as streamlined as possible as often as possible. The unique wheel design is also attributed to adding range, with claims as high as nine miles of additional range added thanks to their shape. 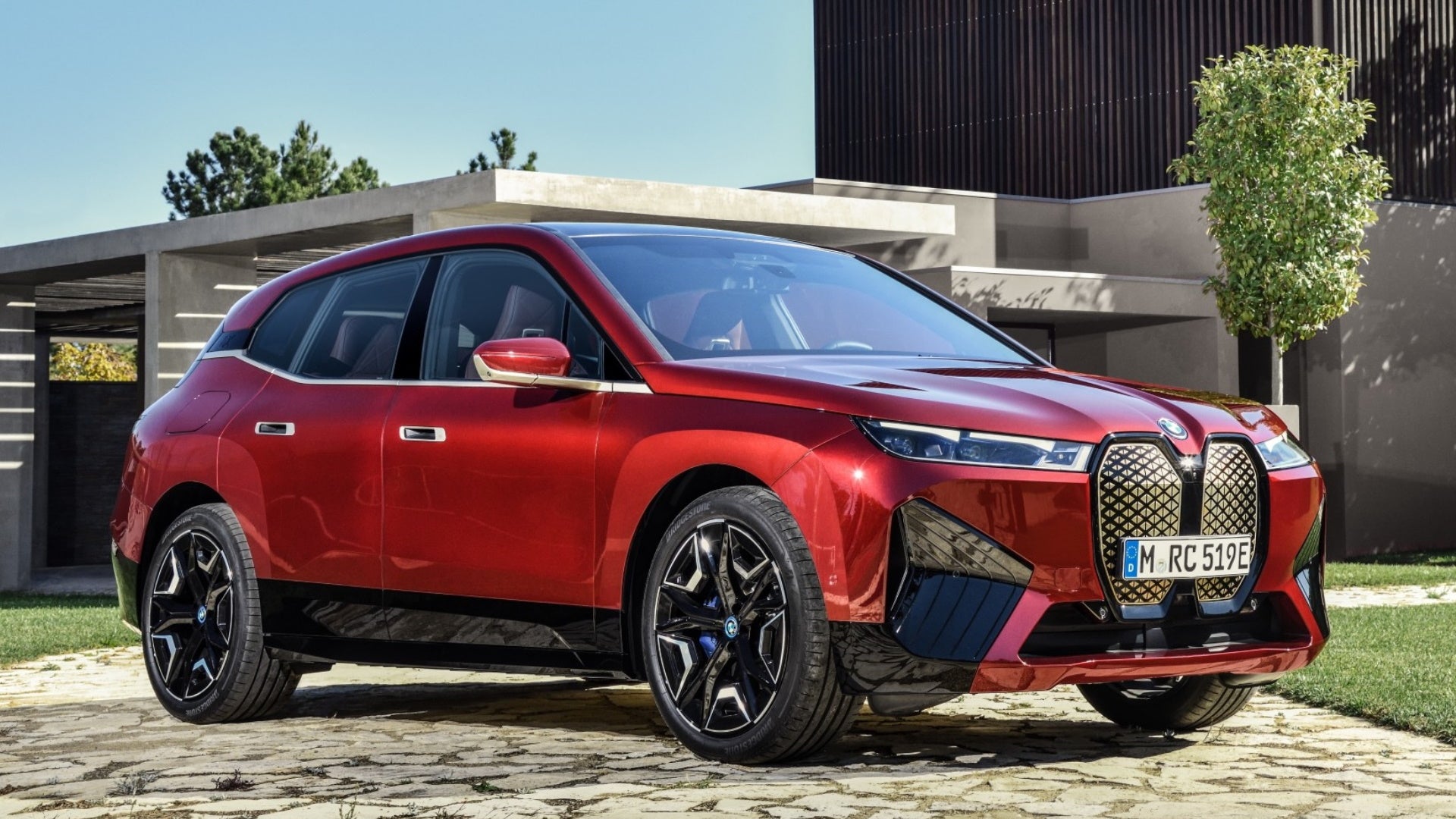 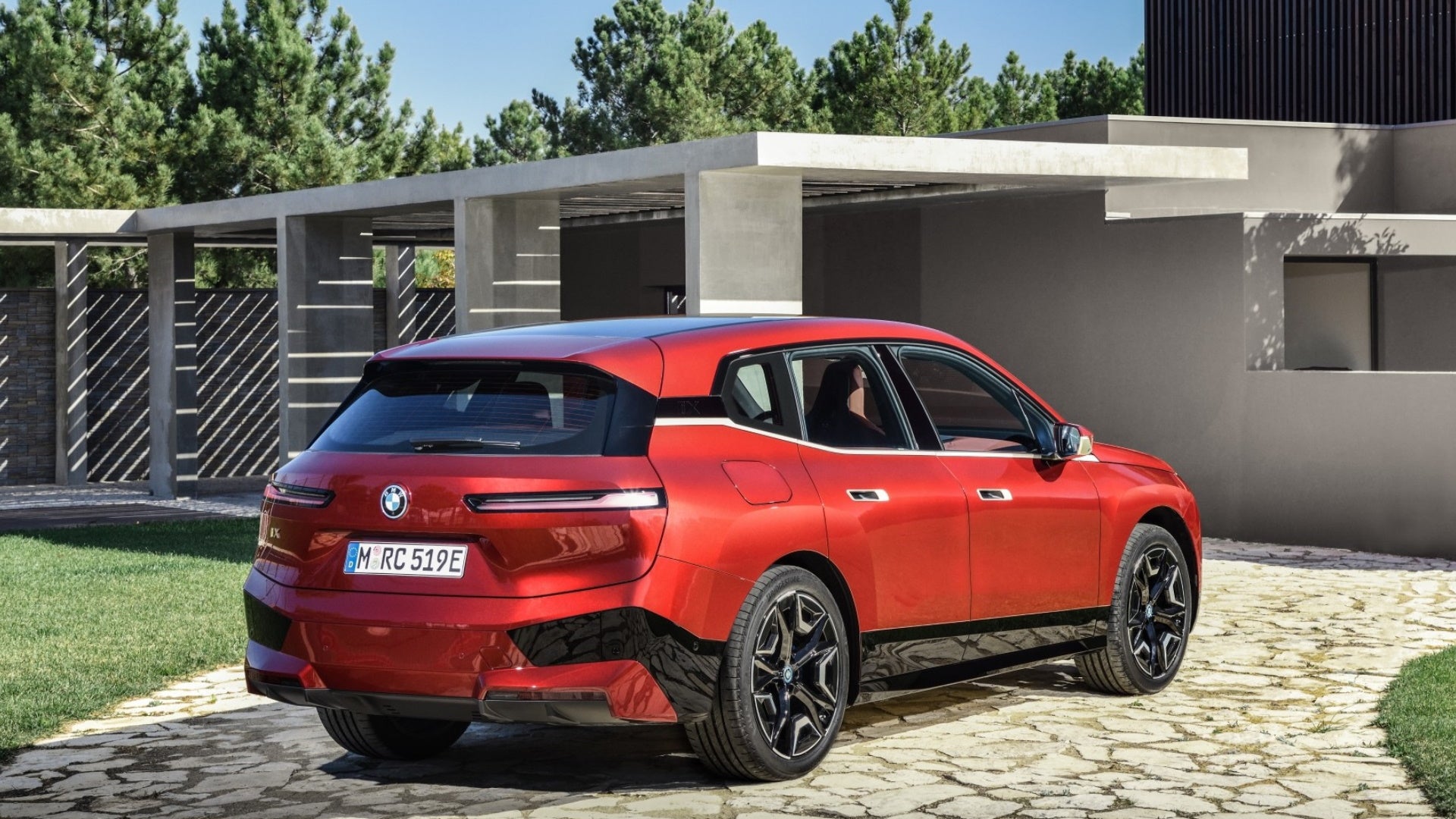 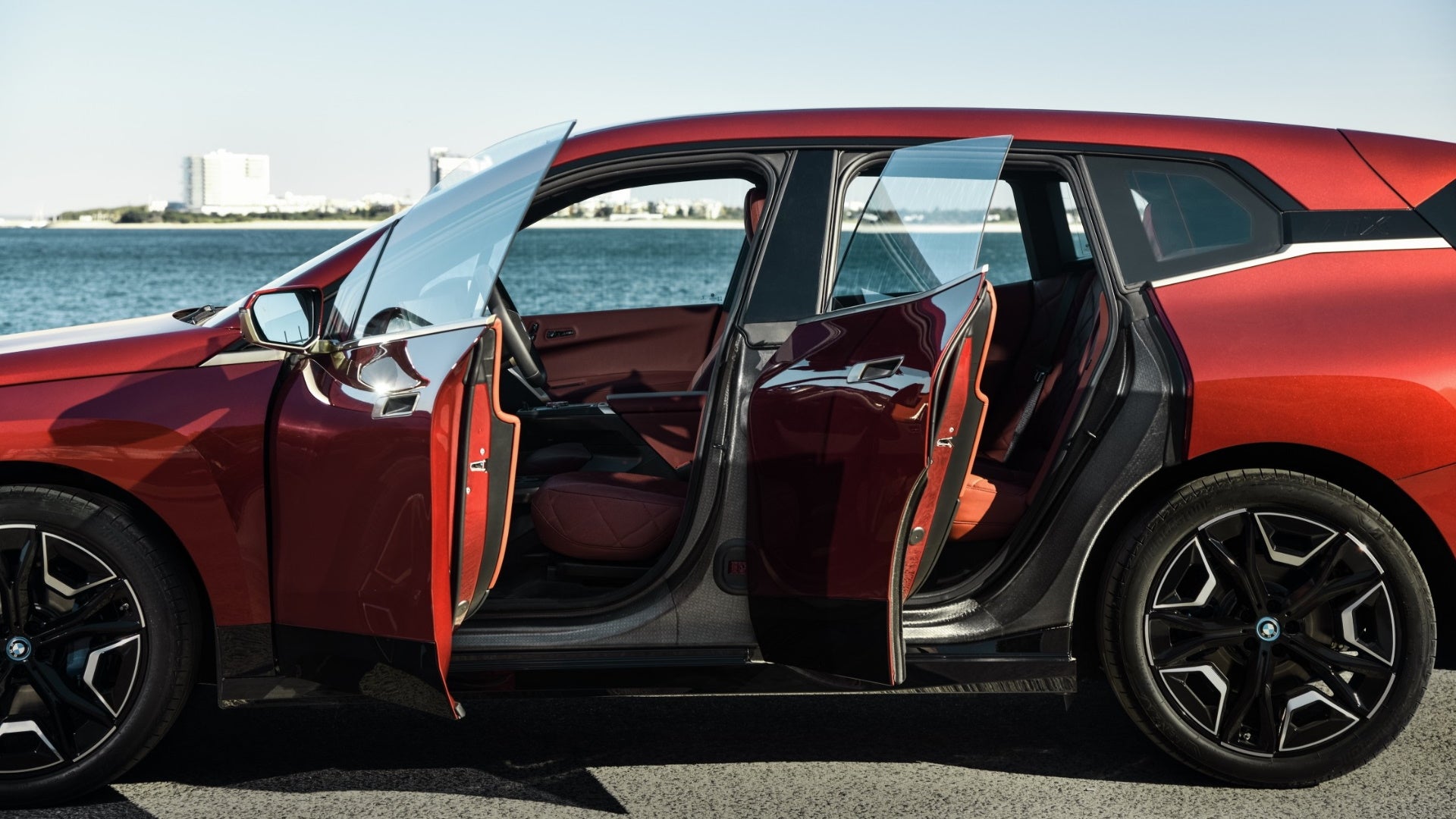 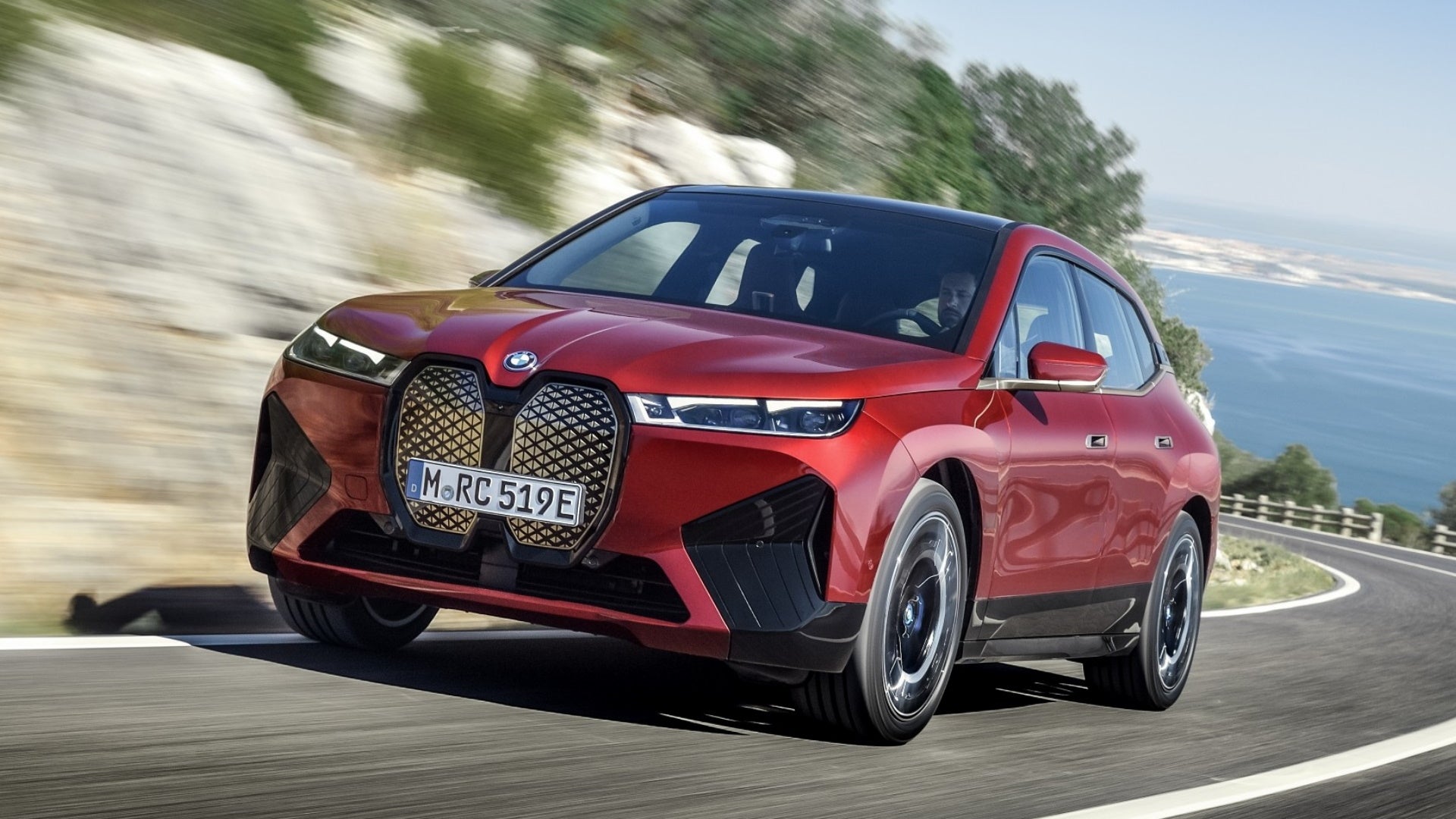 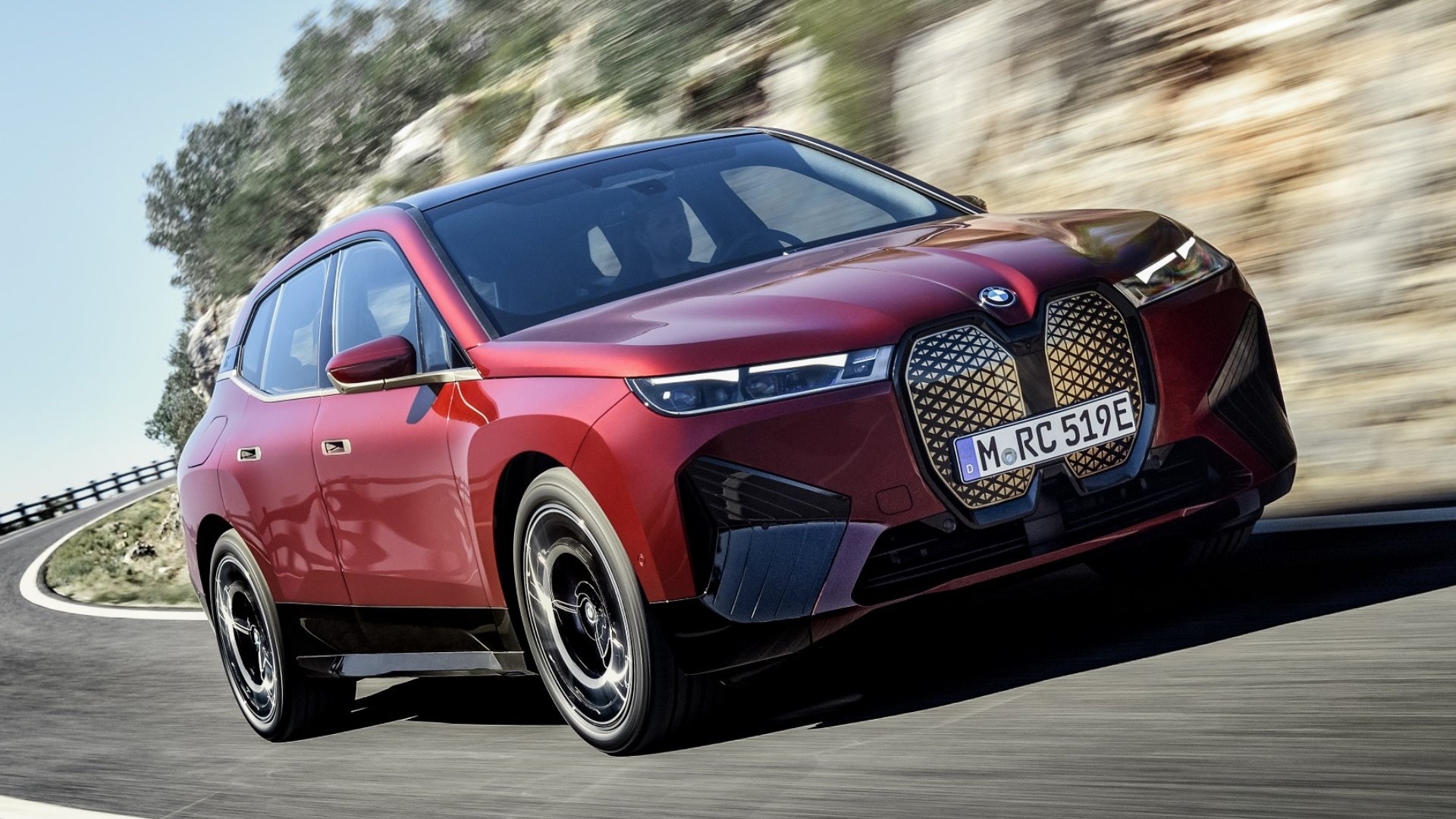 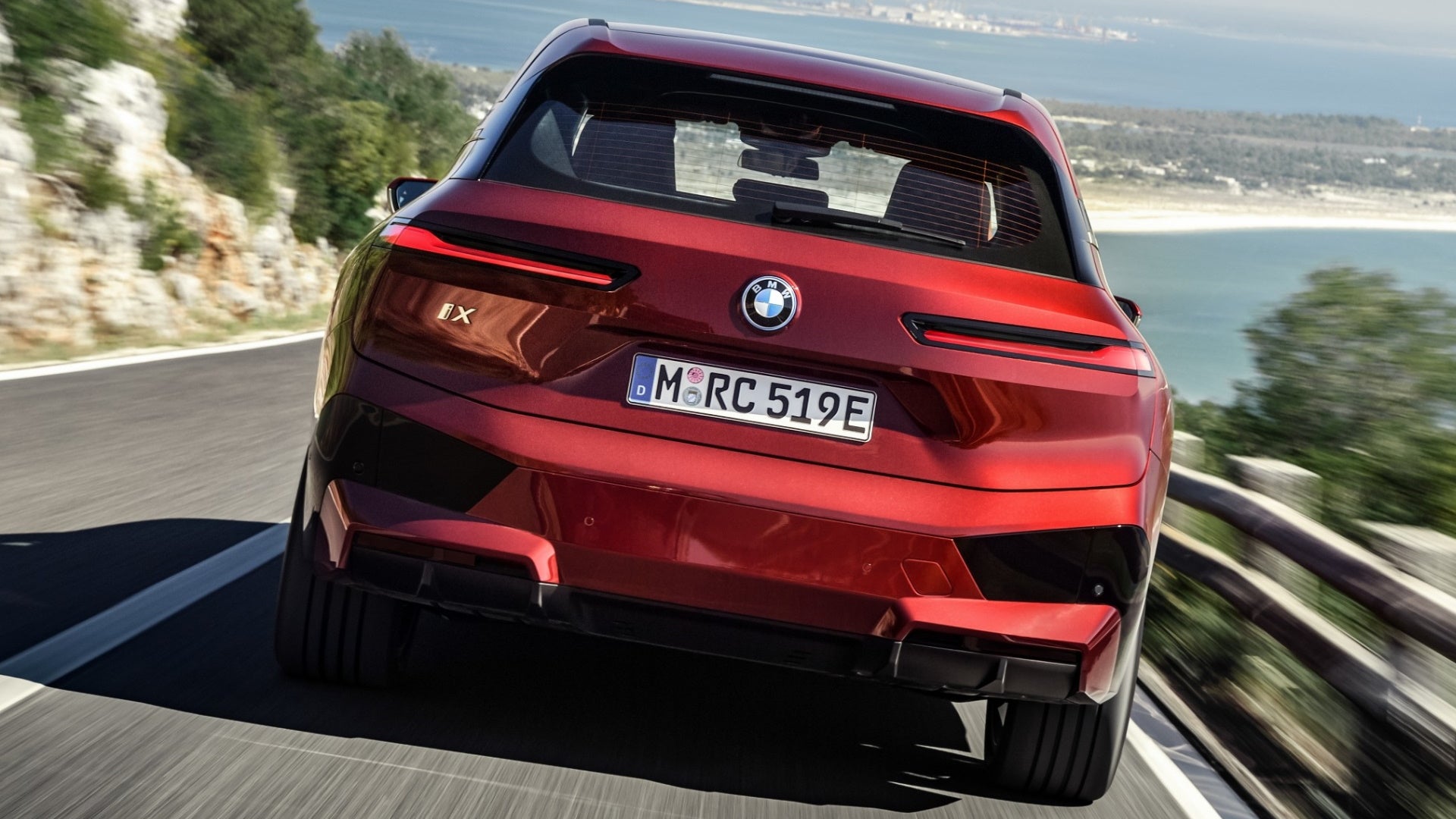 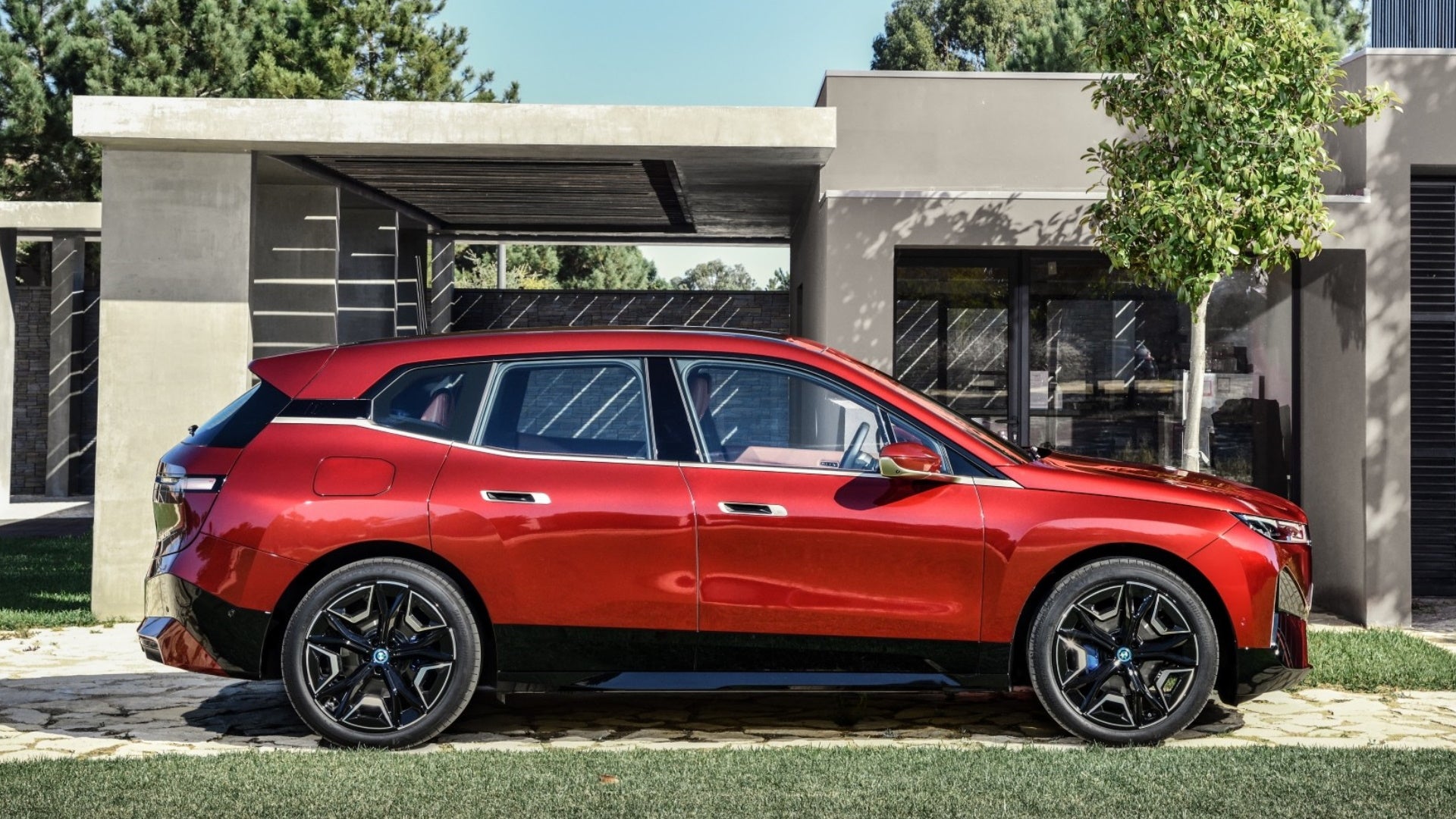 The interior of the iX is inspired by the concept of “shy technology,” i.e, technology that only presents itself when it’s being used or you’re actually exploring its facets. The interior ergonomics are also said to be inspired by a lounge, with the seats being upholstered in a unique geometric pattern using a few different textiles. It’s interesting, to say the least, and we’ll be keen to see how much of it actually makes it to production.

The interior is also defined by a massive panoramic glass roof, which is seeming to become a staple of EVs. BMW says it can be tinted of demand to darken up the interior if it’s too sunny, using a film sandwiched between the layers of laminated glass. Other interior features include a curved, free-floating infotainment screen and digital gauge cluster, along with a head-up display that is flush-fitted into the instrument panel without a frame, allowing it to be hidden from sight. There’s also LED interior lighting, and a number of luxury and comfort features to be expected of a modern luxury car. 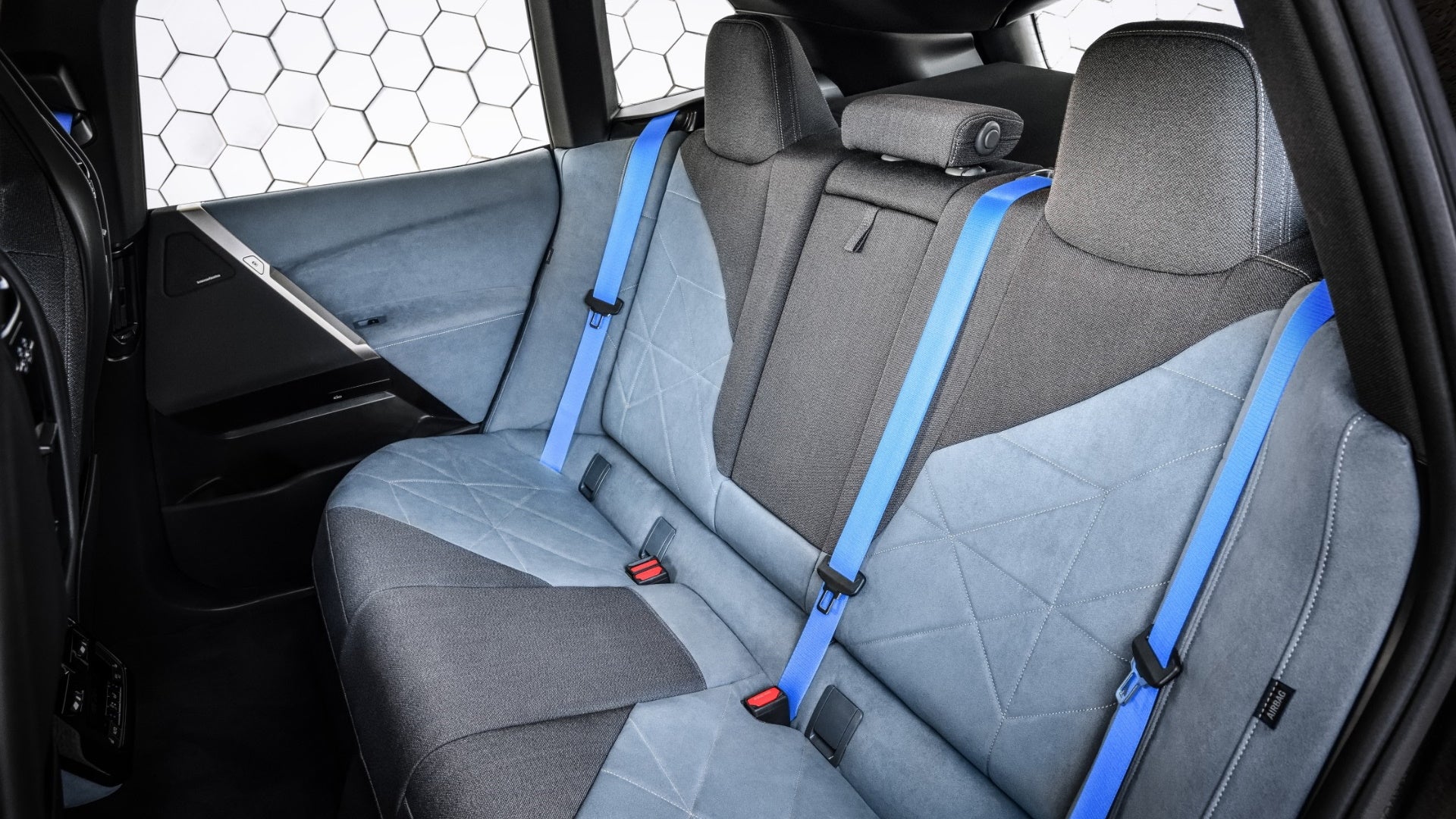 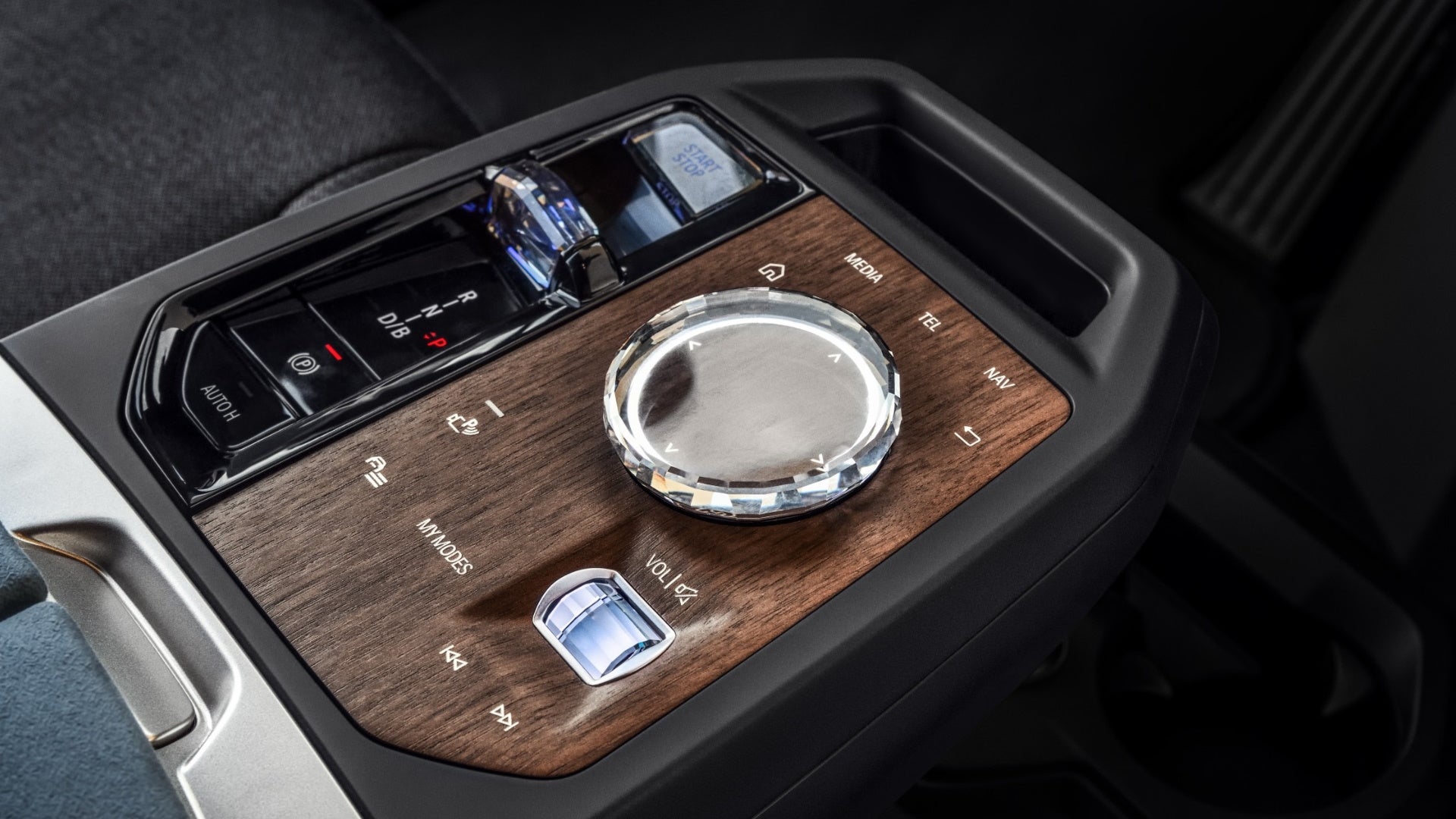 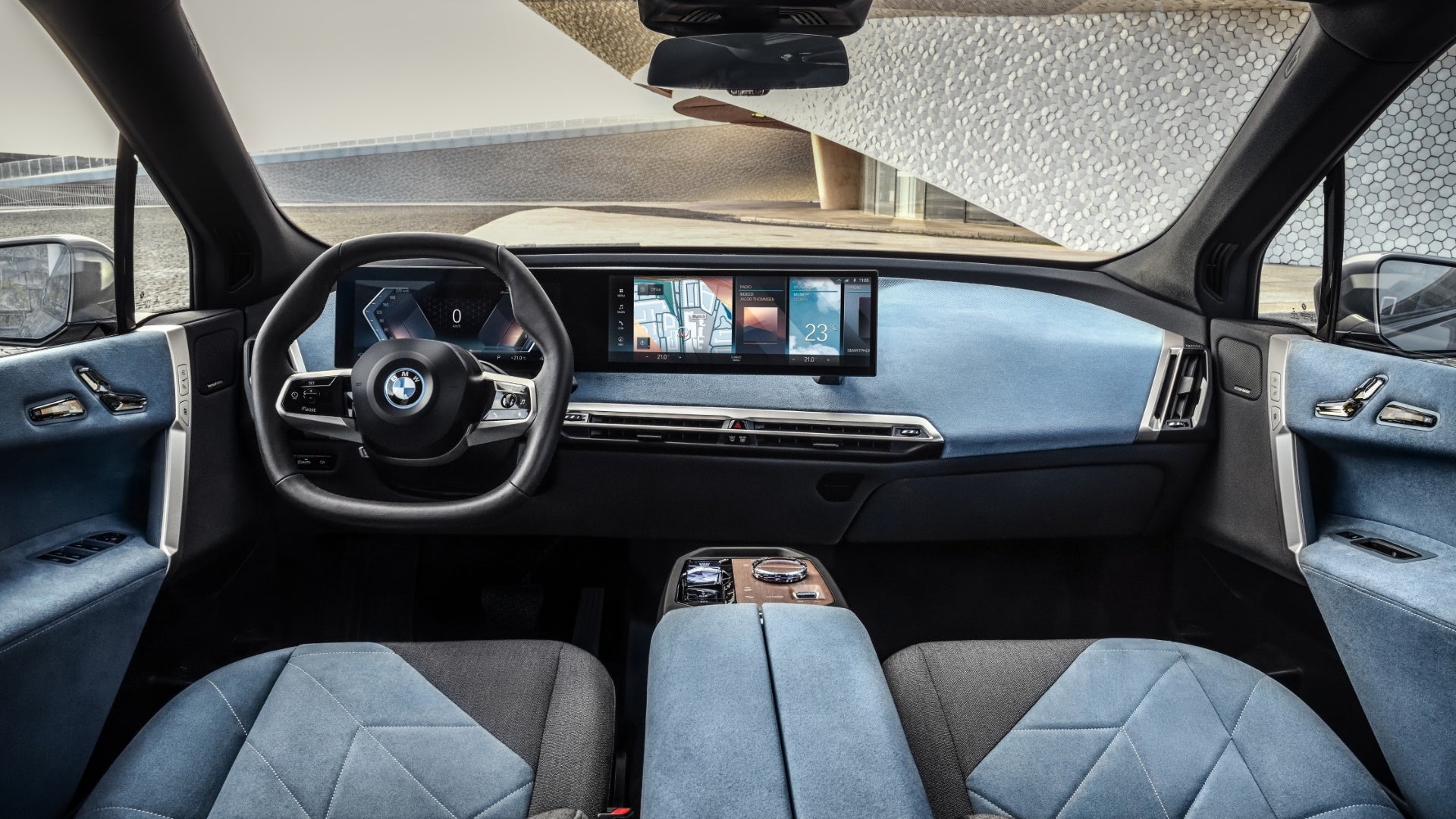 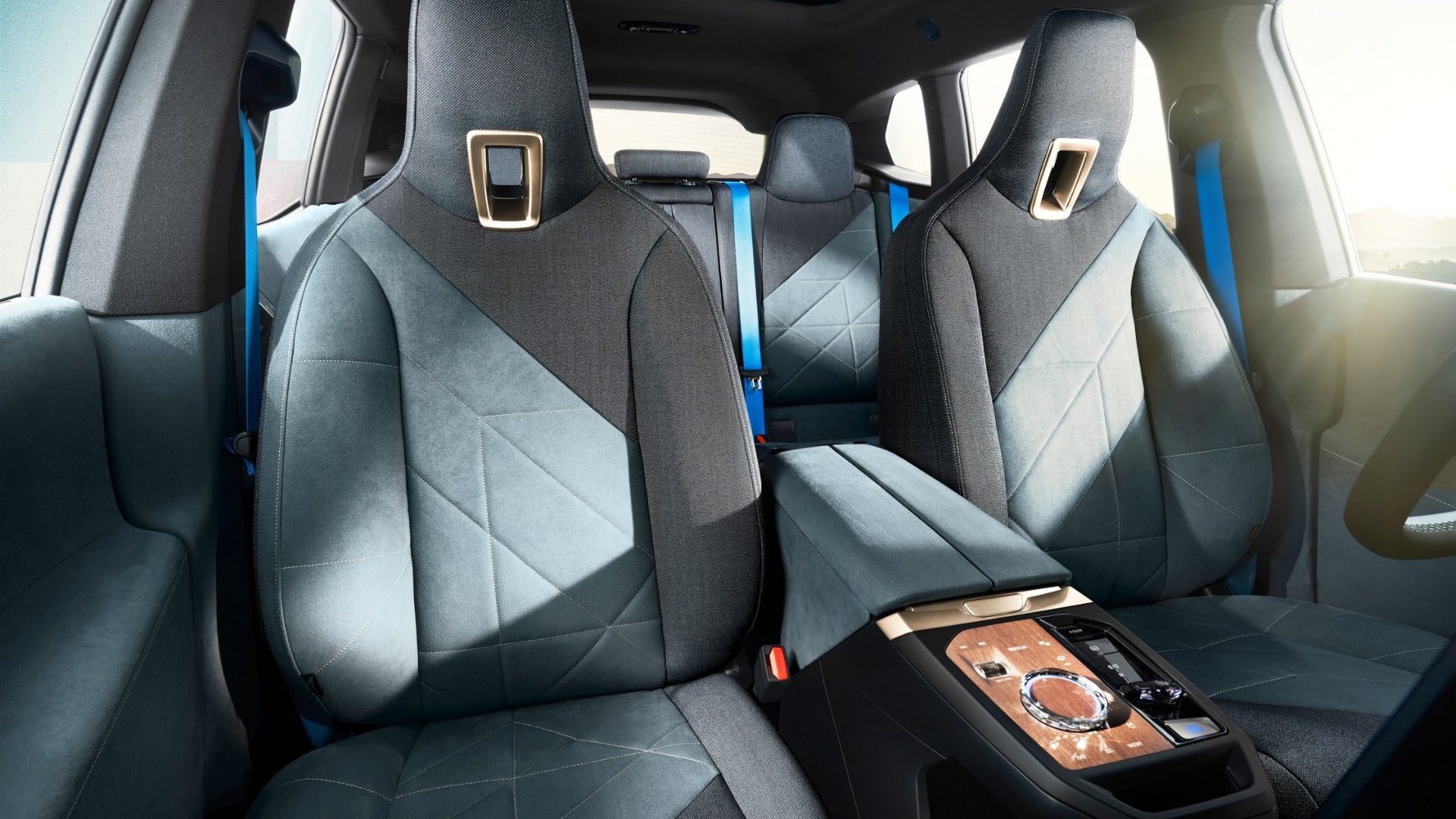 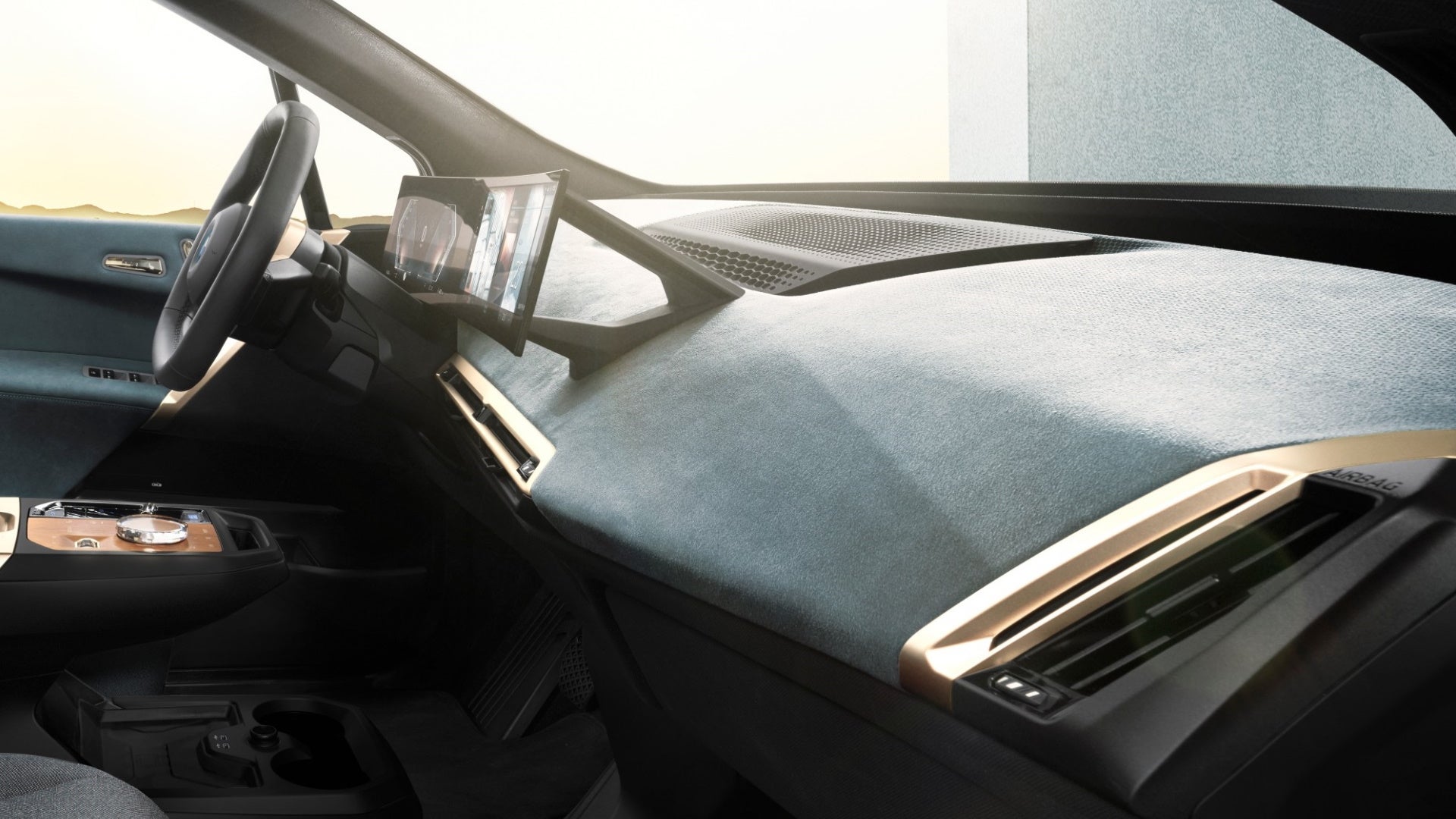 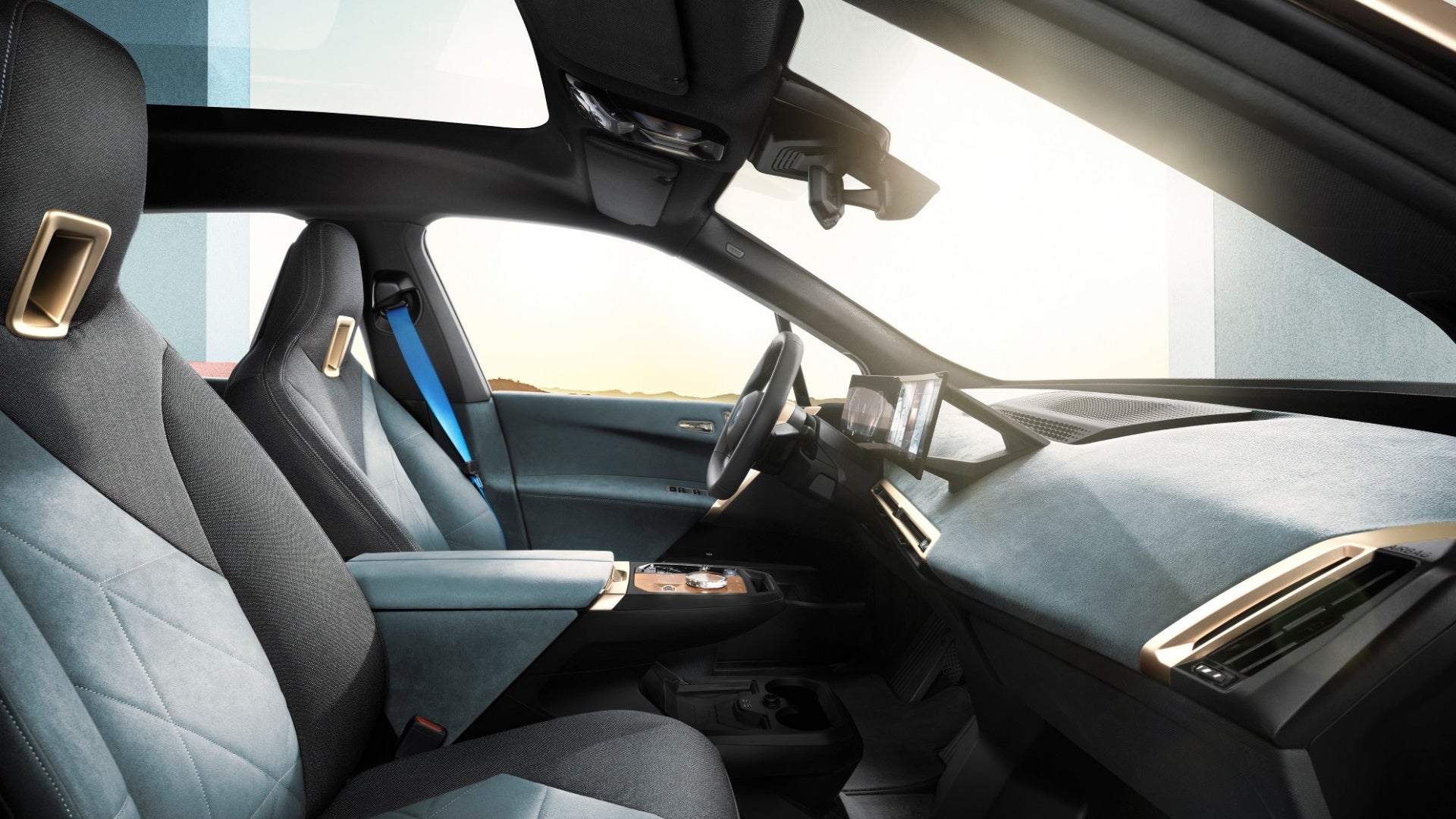 So, with the SUV market getting hotter by the day and EVs looking like the future, BMW is attempting to stay relevant with the iX. With a doubtlessly polarizing exterior design but a captivating new interior concept, it will be interesting to see a full production model once it arrives in the U.S. in 2022. If the i3 or i8 is any indicator of how far BMW is willing to go with even its full-production designs, you can expect a lot of what you see here to end up being mass-produced.