Last week, we recapped the story of a 702-horsepower Ram TRX that was killed in the name of clicks. YouTuber 717 Street Speed recently acquired the $92,000 behemoth and after a video received over 25,000 likes, it was decided that the truck would be jumped for viewer enjoyment. So with only a few hundred miles on the odometer, the truck was catapulted off an embankment and took on quite a bit of damage—and that’s just what we can see.

The YouTuber estimated that the truck was jumped as high as “20 feet,” though that’s fairly hard to measure from the camera angle, and it supposedly spanned about “40 yards.” As you can imagine, the landing wasn’t exactly elegant, but despite the 6,400-pound truck getting pretty banged up, it could still be driven home. Now, suspension manufacturer Bilstein wants to know just how well the truck’s shocks have held up and has offered to reclaim the suspension to see how the active dampers were affected. 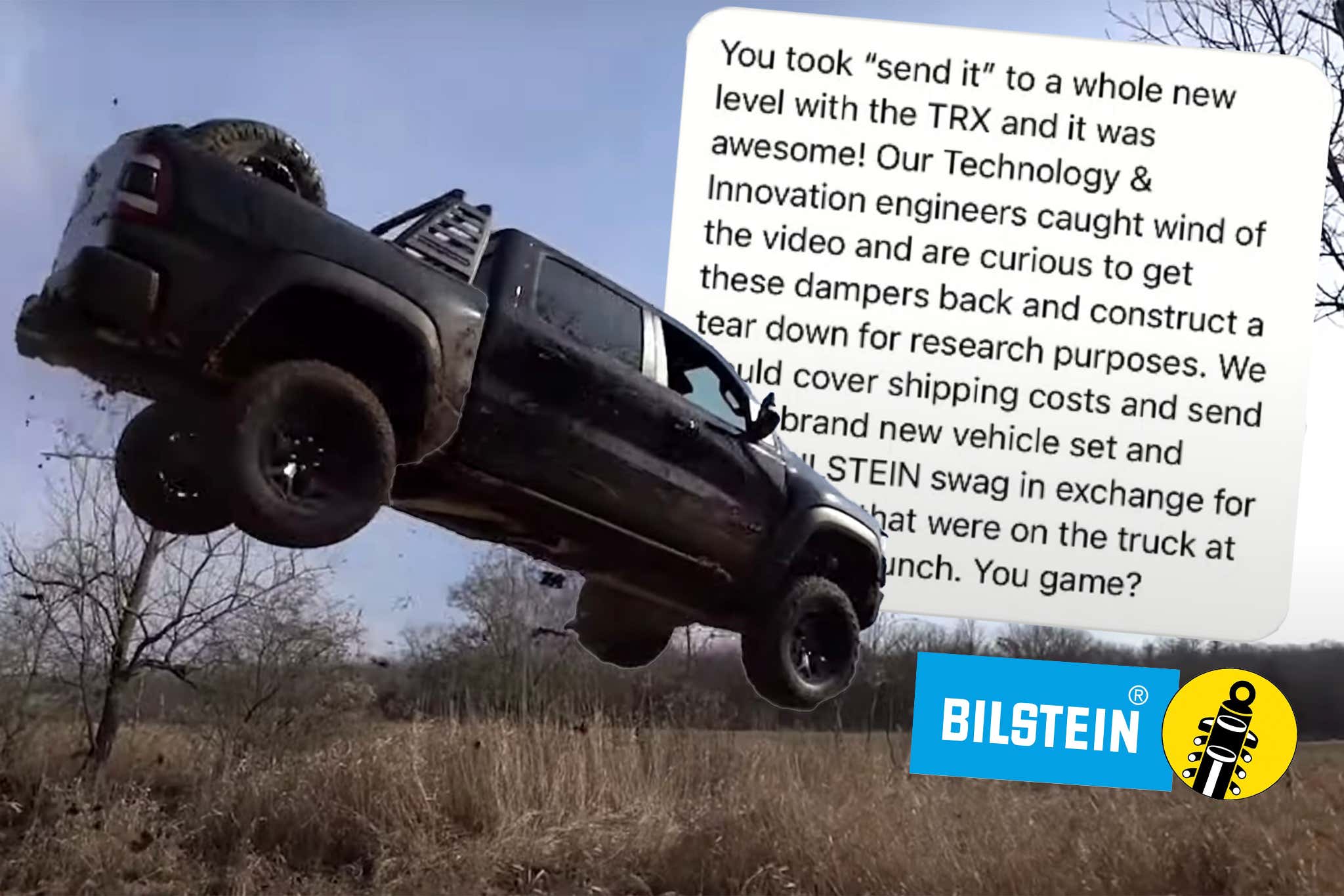 “You took ‘send it’ to a whole new level with the TRX and it was awesome!” wrote Bilstein in an Instagram message to the YouTuber. “Our Technology & Innovation engineers caught wind of the video and are curious to get these dampers back and construct a tear down for research purposes.”

You might be wondering why Bilstein of all companies is involved in this. Well, the TRX is a rather special creation from Ram’s product engineers, and many of its components are supplied by companies who are known for their high-end aftermarket offerings. That includes Bilstein which supplies the Black Hawk e2 adaptive shocks for the TRX.

Bilstein offered to send a whole new set of shocks for the truck plus some elusive “Bilstein swag,” as well as cover shipping for the return. We reached out to Bilstein to find out exactly what it expects to find from the teardown and will update this story once they get back with us.

Following the carnage, Street Speed 717 put out an aftermath video showing just how the jump affected the TRX—and folks, it isn’t pretty.

When the TRX landed on its front-passenger wheel, it transferred quite a shock through the truck. The bed contorted and shot forward into the cab, leaving a significant dent and shattering the rear window. The tailgate was tweaked and panels across the entire vehicle became misaligned. It certainly seems as if the body shifted or the frame adjusted itself as a result of the impact.

The front bumper is a goner, dented and packed so tightly with dirt from the landing that it can’t be freed by hand. Underneath, the metal skid plate was bent and the brackets that previously secured the external reservoirs for the shocks were obliterated. Look just a bit higher under the hood and you’ll find that even the battery tray has snapped off.

Street Speed 717 plans to keep the truck despite the damage. His plans have shifted from a luxurious Hellcat-powered land yacht to a badass off-road rig to complement the rest of his growing vehicle fleet. And now that the break-in period of 1,000 miles has passed, he might not feel as bad making some rather unorthodox modifications.

As for Bilstein, we’re interested to know what it might find when tearing apart the truck’s suspension. Here’s hoping the folks over their share that knowledge once it becomes available.