With that seven-slot grille design, timeless proportions and a reputation for rugged adventures, the Jeep brand is likely to remain one of the upcoming Fiat Chrysler-Groupe PSA merger’s most valuable assets. The giant named Stellantis should never forget what the American Motor Corporation did for the cause, simply by continuing to produce some of the most basic and capable off-roaders at a price most could afford. Between 1976 and 1986, AMC built 379,299 CJ-7s, and despite their tendency to rust and crack, some of those classics shall live forever thanks to a robust parts market.

Welcome to Ad of the Week! Vintage ads are fun. They come from a time when enthusiasts gathered their knowledge mostly from print magazines, TV and radio ads, and billboards sized to fit several land yachts. We’ll be taking a deeper look at one every week to explain the claims, context, and how that all worked out in reality.

For 1976, the CJ-7 was put on a wheelbase that was only 10 inches longer than a CJ-5, unlike the failed CJ-6’s 20-inch stretch. Five years later, those looking for more room could choose AMC’s CJ-8 Scrambler, a small pickup truck featuring a longer 103-inch wheelbase for increased cargo space. Yet while the CJ-8 was never offered with a V8, the CJ-7 could be yours with a 2.5-liter four-cylinder, 3.8-4.2-liter AMC straight-six engines, and even a 5.0-liter V8 combined with 3.55 ratio axles instead of the standard 3.73. There was also an Isuzu diesel made for export only.

CJ-7s still carried over plenty of CJ-5 components, yet with the bigger frame, Jeep could fit them with a three-speed automatic as well. Early CJ-7s featured AMC 20 rear axles and the chain-driven Quadra-Trac permanent four-wheel-drive system, which first used a Borg-Warner BW1339 transfer case to offer only 4WD Hi in full-time open or part-time locked modes. Once Jeep upgraded to the 1339 transfer case with the additional 2.57:1 low range gear set, the CJ-7’s drive modes increased to five, including 4WD Hi locked, 4WD Low open, and 4WD Low locked. From 1980, these Jeeps came with Dana 30 front axles and Dana 300 transfer cases, a switch that has much improved their reliability. 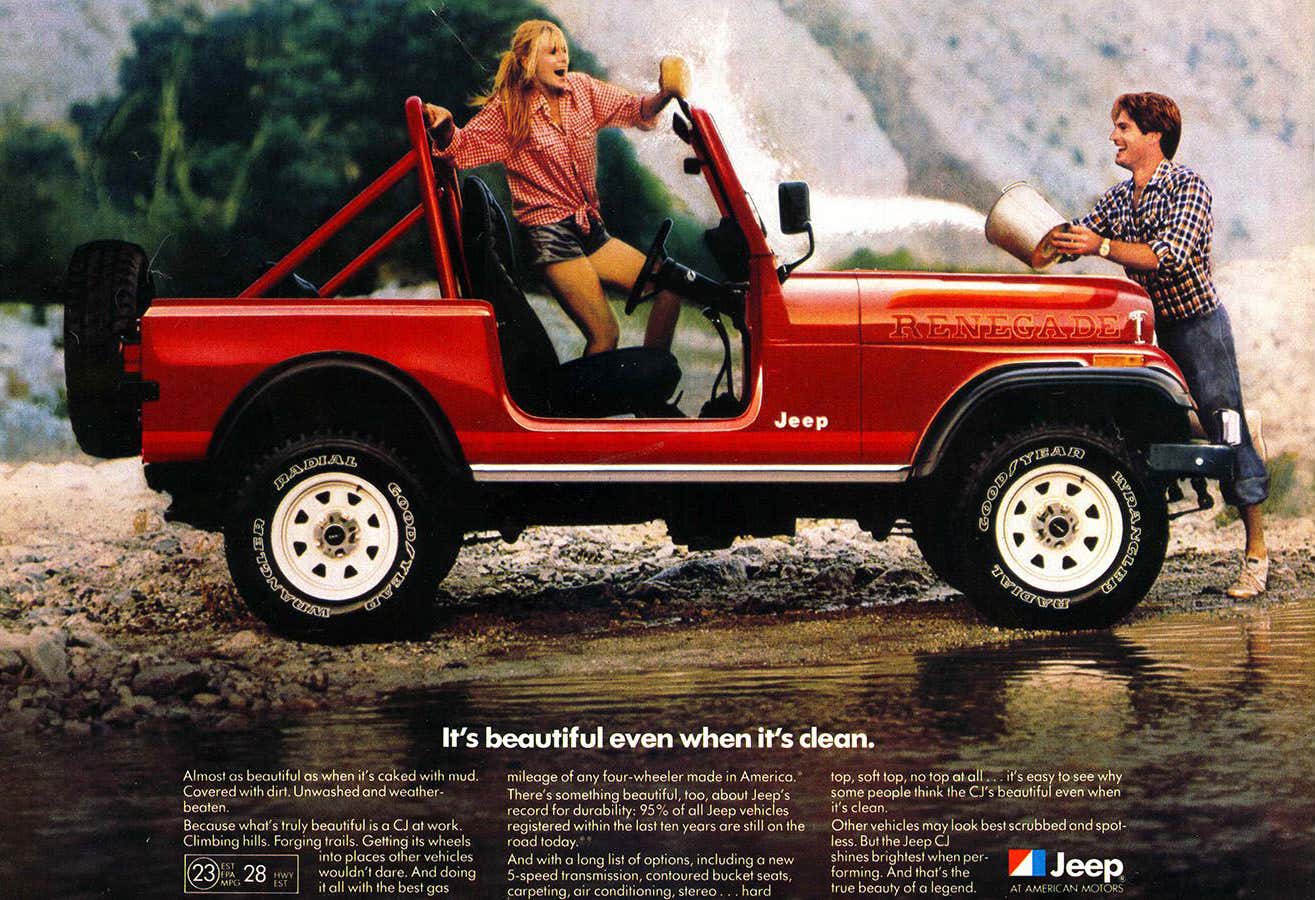 Having sorted all that out by 1982, AMC also felt the need to remind its potential customers that its off-roaders looked beautiful regardless of how dirty you kept them. Advertizing how 95-percent of their products survived at least a decade on the road while providing the best fuel economy in their classes, the CJ-7’s trim levels included the Renegades, Golden Eagles and Hawks, the Laredos with leather seats and the full chrome package, the rare Limiteds, and the only individually numbered CJ-7s out there, the Jamboree Commemorative Editions of 1982.

The CJ-7’s career ended in 1986, just a year before Chrysler took over Jeep. In 1987, the Wrangler (YJ) replaced the CJ series, featuring a wider track, angled grille, rectangular headlamps, and somewhat fancier interior. Calling it “very civilized”, Jeep says despite its familiar looks, the YJ has more in common with the Cherokee than the CJ-7. Meanwhile, the 4x4s shaped and sized like classic Jeeps are now made in India instead of America, marketed as the Mahindra Thars.

Is your CJ series clean today?