First, that name: The 2021 Kia Seltos is named after the son of Hercules, the strongman of Greek mythology, though his son’s name is actually spelled “Celtos.” Reportedly Kia changed the spelling to better align with its other models that start with an “S,” such as Sportage, Sorento, Sedona, Stinger and, of course, the Soul, with which the Seltos shares multiple components. It seems dangerous to maybe piss off Hercules, but that’s not our concern.

It is hard to believe that the Soul has been in the marketplace since 2010, and its sales success has surprised even Kia executives. While dimensionally the new Seltos is a little larger than the Soul, what sets the Seltos apart is its attitude. 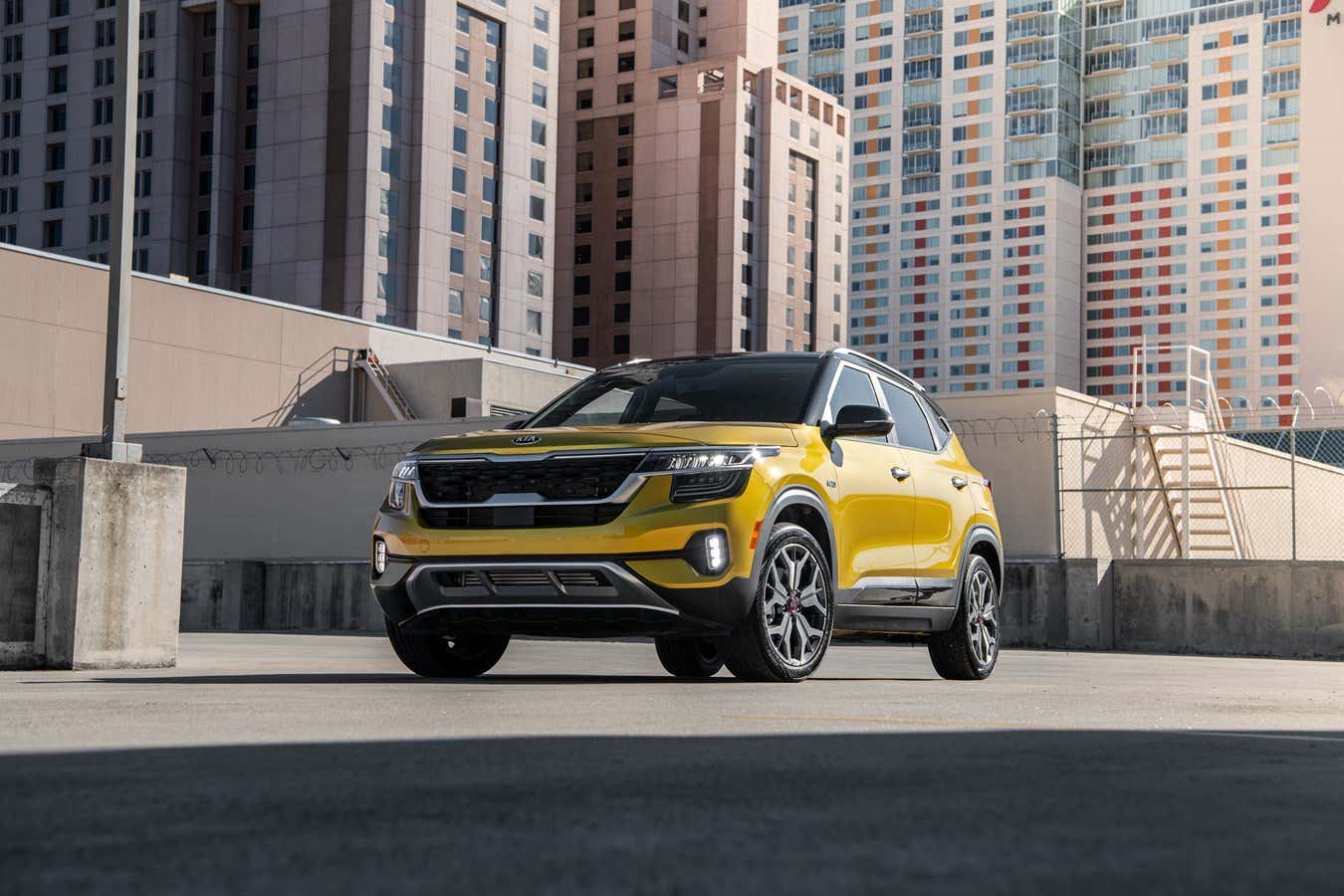 Like the Subaru Crosstrek, Jeep Renegade, the new Chevrolet Trailblazer and the Hyundai Kona, the stance and styling of the Seltos promises adventure, while the Soul is more inclined towards practicality. 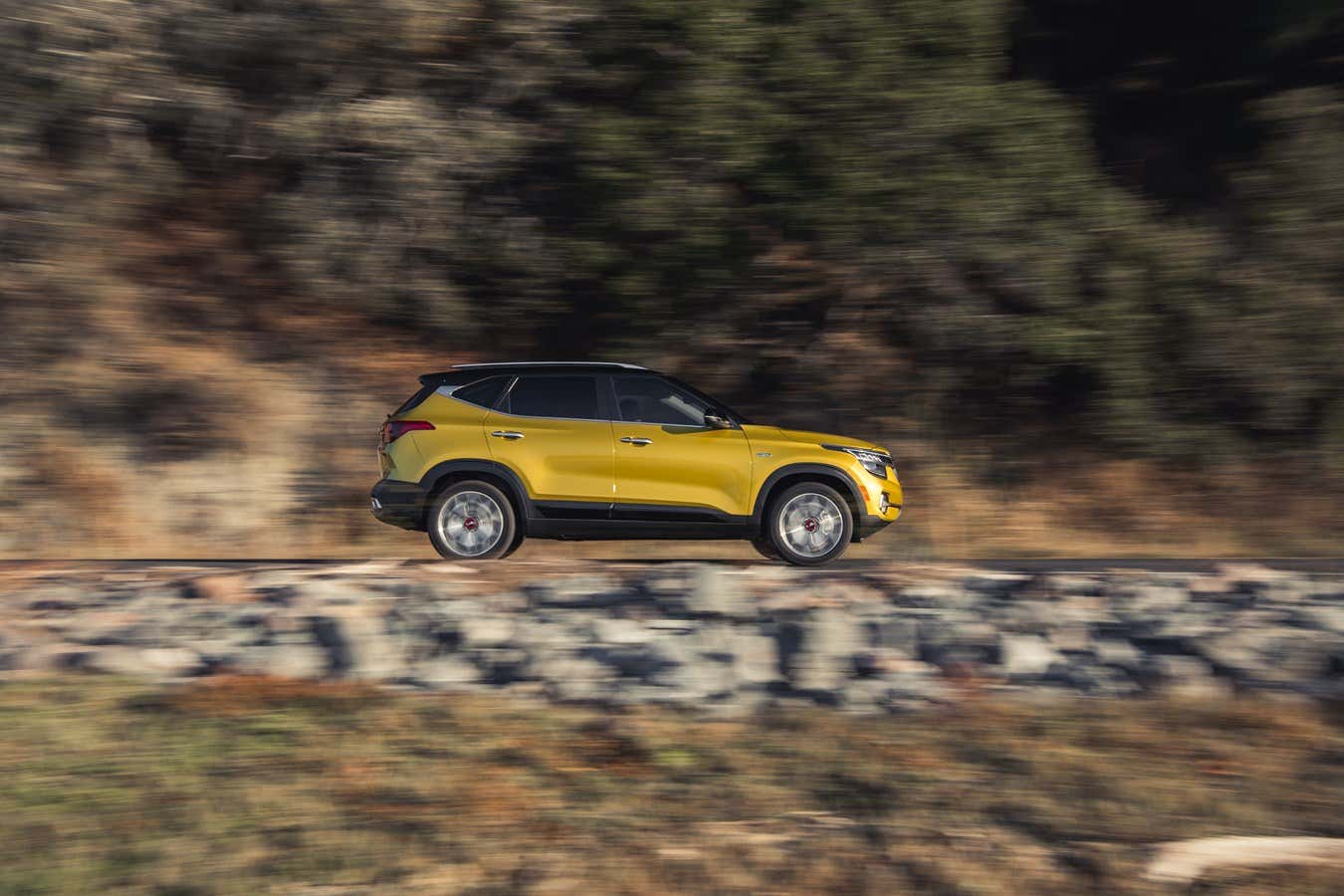 Of course, promising adventure and delivering it are two different things, but the Seltos, particularly in the more upscale versions, has its credentials.

With available all-wheel-drive, a feature the front-drive Soul doesn’t offer, the Seltos can be a competent off-roader, so long as you stick to the trails. At the 2019 Los Angeles Auto Show, where the Seltos debuted, Kia showed a couple of concept versions called the X-Line with bigger tires and wheels, two inches of additional ground clearance, big roof racks and (blinding) off-road lighting. While the X-Line models may or may not go into production, the message of Kia is clear: Add some aftermarket equipment, and your Seltos can look as mean as the X-Line.

This is not to say the Seltos is at all impractical. It comfortably seats four, or five if you have a skinny friend who really needs a ride. Cargo capacity is generous for the Seltos’ size, and fuel economy from either of the two available four-cylinder engines is acceptable. 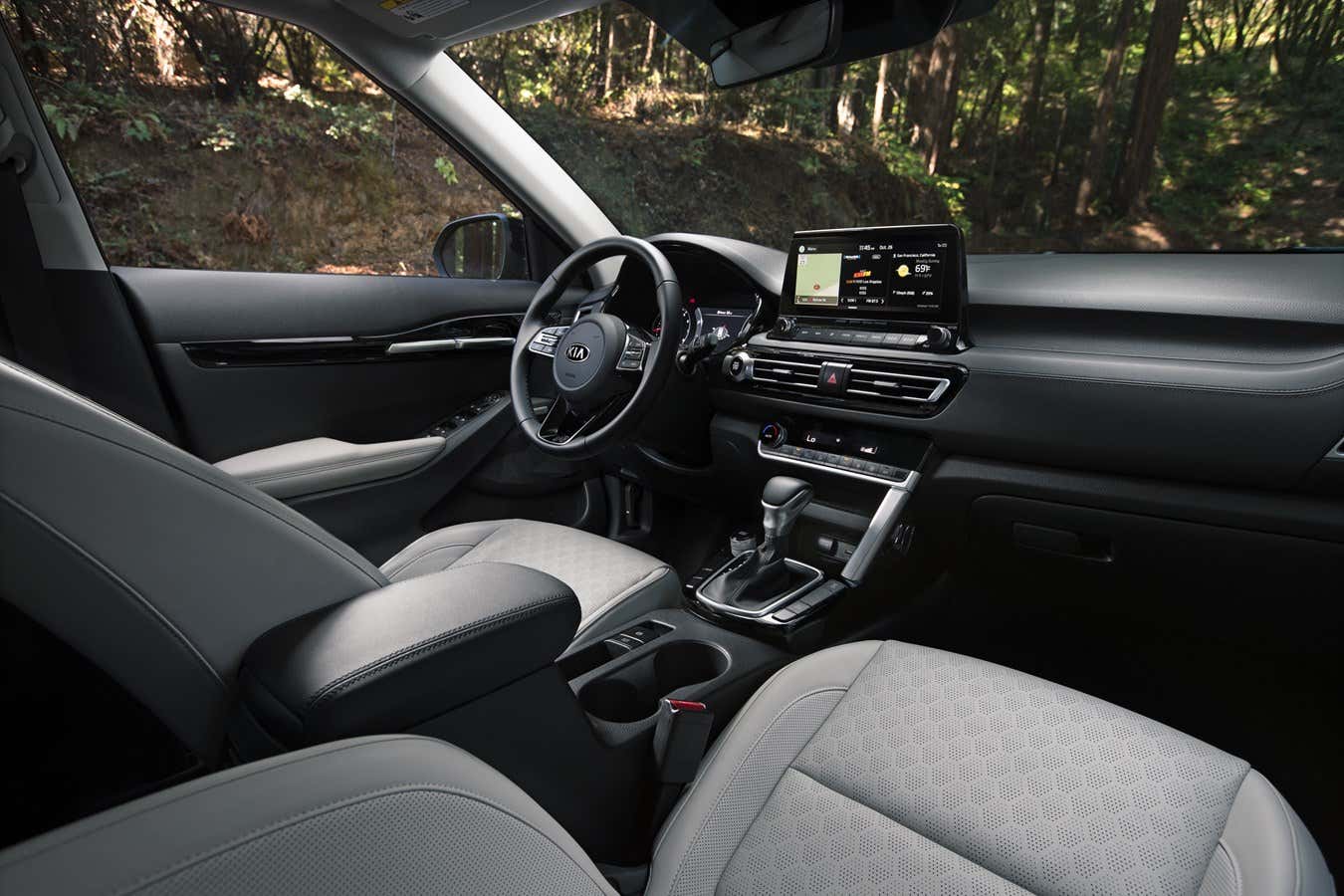 The Seltos adds to Kia’s already impressive lineup of crossovers and SUVs, slotting in behind the Sportage, then the Sorento, then the award-winning Telluride, Kia’s biggest sport-ute, the one that has three rows of seats and can handle up to eight passengers. Add in the more station wagon-like Soul and the hybrid Niro crossovers, and Kia seemingly has this segment of the market covered.

Recall that Kia entered the U.S. market gradually in 1993 and 1994, with just two vehicles: The long-forgotten Sephia sedan, and a spindly little sport-ute with available all-wheel-drive, the Sportage. Sales of the Sportage took off—at one point, it was outselling the Toyota RAV4—and that gave Kia the toehold it needed in America. Stick with what works, and SUVs have worked for Kia. The Seltos should be a success. 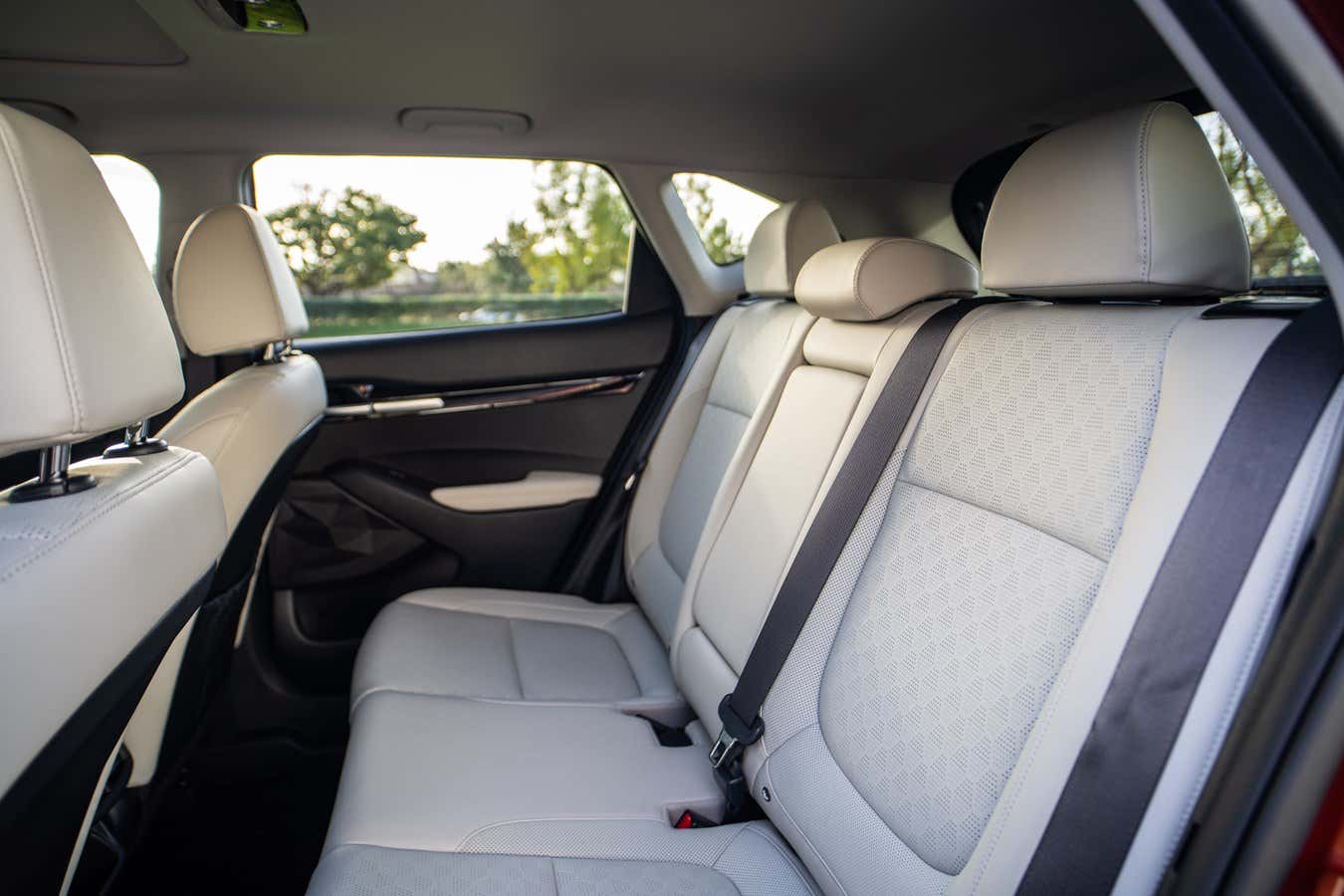 The base Seltos, the S, is the only one of the six models that has front-wheel-drive – the rest are all-wheel-drive. The next model up is the LX, which has AWD, but oddly lists for the same price as the FWD S, $21,995. The next model up is the Seltos S with AWD (are you getting confused yet?), which starts at $23,490. And next is the Seltos EX, with a starting price of $25,490. Those four models have the naturally-aspirated 2.0-liter four-cylinder engine. 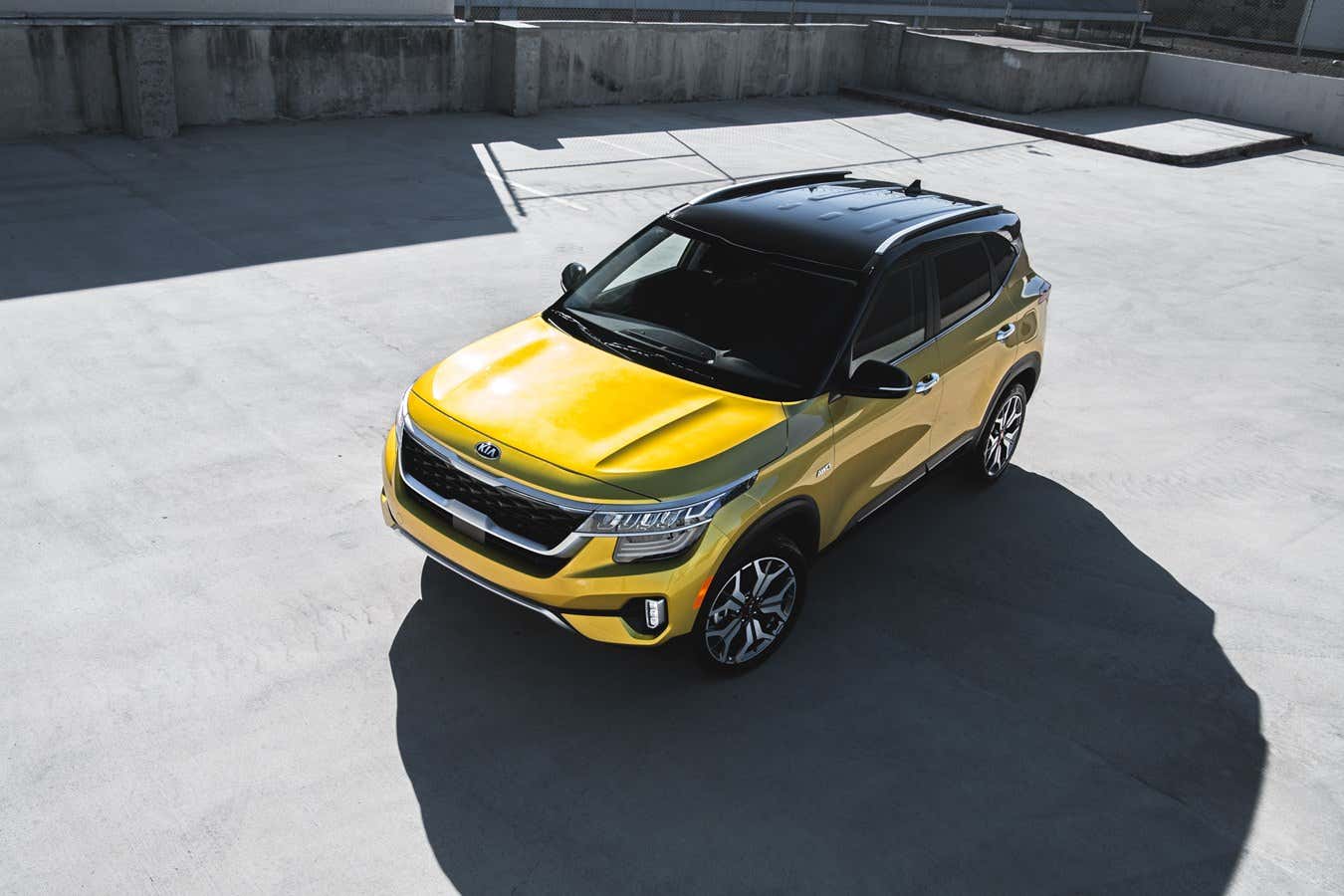 Climbing up the model lineup, number five is the Seltos S 1.6T, which has the smaller but more powerful 1.6-liter four-cylinder, which is turbocharged. And rounding out the field is the top-of-the-line Seltos SX, which also has the 1.6-liter turbocharged four-cylinder.

The Seltos was introduced with a commercial where the car’s owner is “taking a shortcut to work,” by tearing across some pristine sand dunes. Yes, it looks like fun, but given my brief but thorough off-road drive in a Seltos, this is not the vehicle I’d choose to tackle Baja with. It’s as limited as any other unibody, FWD-based crossover with 7-8 inches of ground clearance and street tires: capable of going a lot further than 98 percent of owners will ever push it, but still not an off-road machine in the true sense of the label. 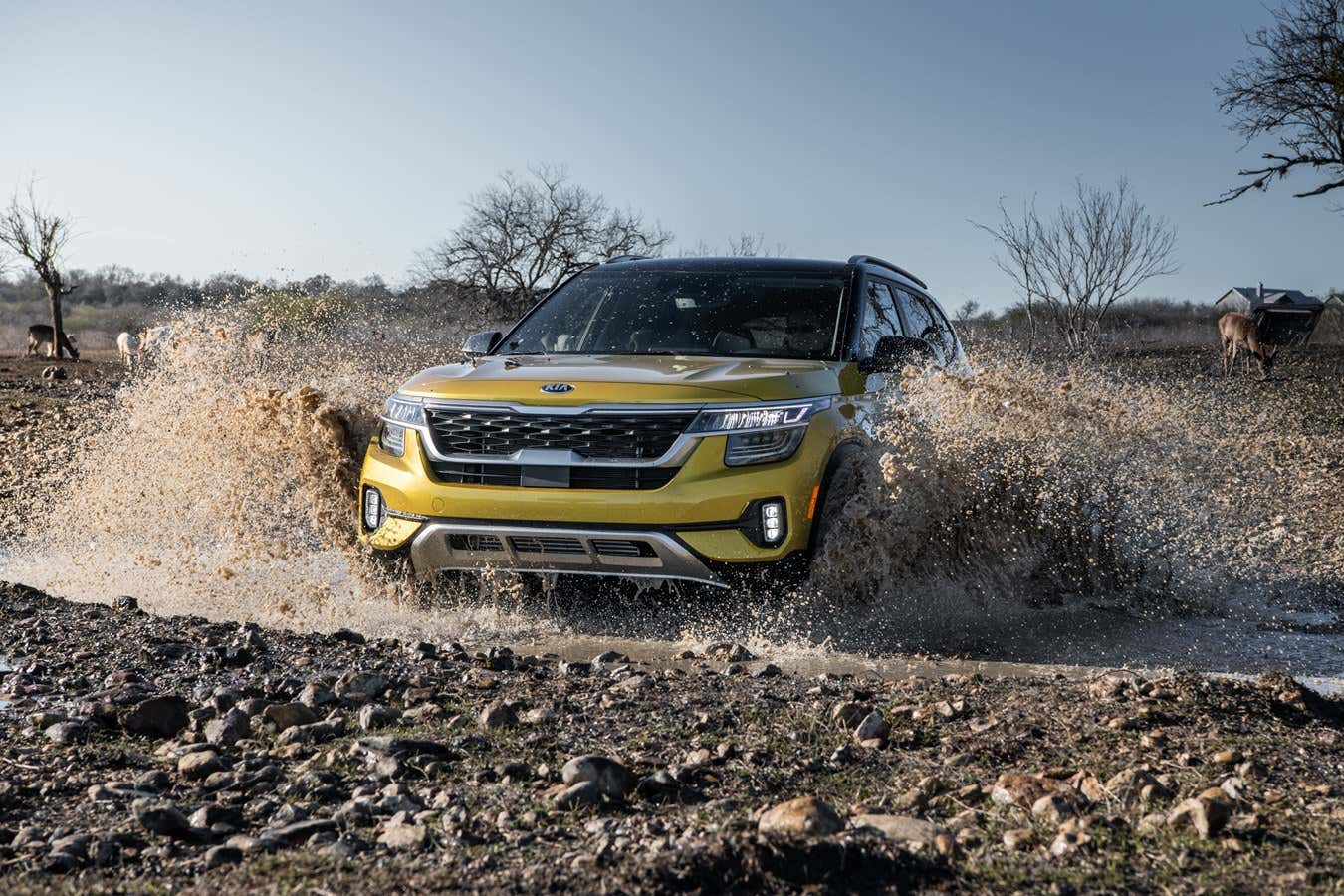 That said, the optional all-wheel-drive is always welcome, though the standard FWD kit handles the vast majority of bad weather you are likely to encounter with competence. With the average model weighing in at a little over 3,000 lbs., the Seltos feels surprisingly light on its feet. Kia got the suspension right—the ride is reasonably smooth, yet the Seltos enjoys a winding back road more than most of the small SUVs on the market.

The smallest motor gets the worst fuel mileage: AN EPA-average of 25mpg city, 30 highway, and 27 overall. The LX and the S, with the larger but less powerful engine, average about 2 mpg across the board. 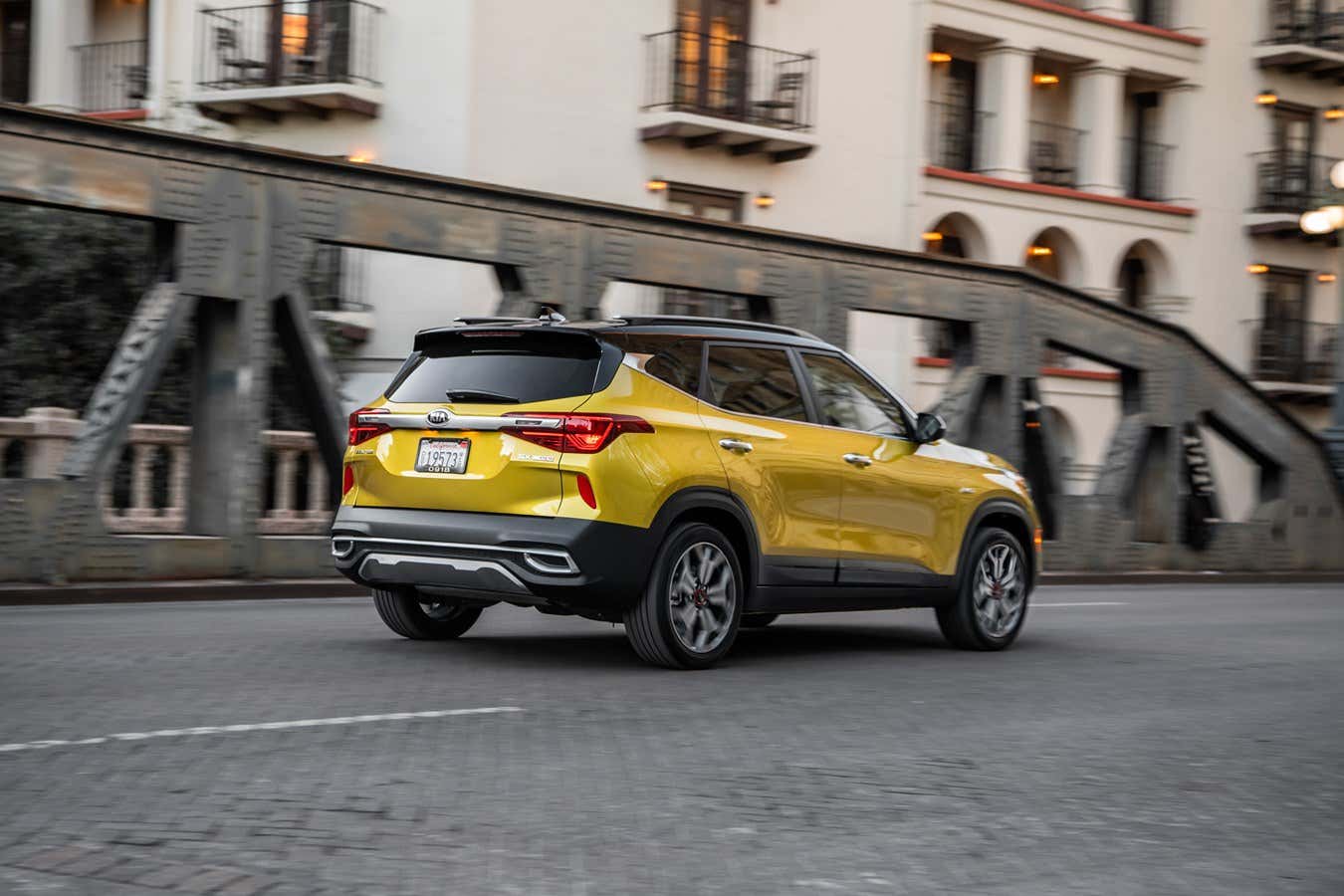 Yes, the styling is polarizing, but I think it’s necessarily modern to survive in today’s marketplace. The base model offers a lot for the money, so long as you can tolerate the base 2.0-liter, 146-hp four cylinder, but as the price of a Seltos climbs, you get some quality upgrades, including that 175-horse, 1.6-liter turbocharged four-cylinder, and some important safety upgrades. All models get the seven-speed sequential CVT transmission, and it’s adequate for the calling.

The Seltos works, achieving its mission of being inexpensive, stylish and useful. Nice job.